Abu Dhabi currently faces its most ambitious challenge yet: becoming a centre of culture and the arts through the culture of design. After building numerous luxury hotels, shopping malls and golf courses, the largest of the Arab Emirates is now assigning a priority role to architecture and design. 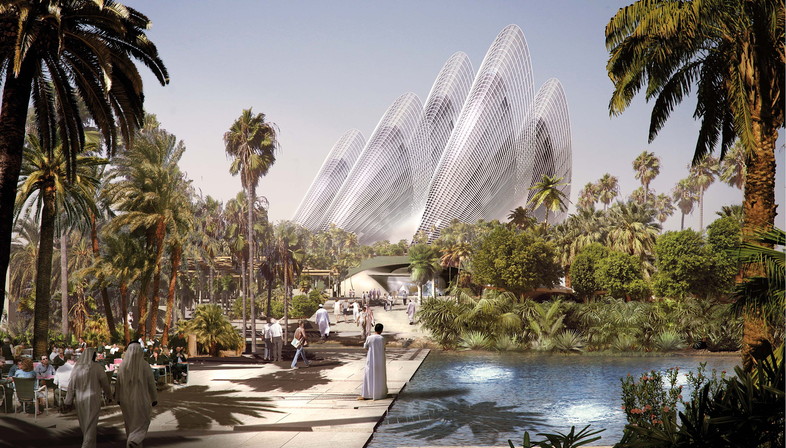 Island of Saadiyat
A wide-ranging project that aims to transform an island into a cultural district on a par with the great museums of Europe and become an international landmark. The Manarat Al Saadiyat and the United Arab Emirates Pavilion are already open to visitors, exhibiting future plans for the island and offering visitors a taste of more to come with temporary exhibitions featuring collections from all over the world

Manarat Al Saadiyat
This centre, built specifically for visitors (Manarat Al Saadiyat means “place that lights up” in Arabic), hosts the annual Abu Dhabi Art fair, a modern, contemporary platform featuring public programmes. The event brings art galleries from all over the world to the capital of the UAE.

UAE Pavilion – Norman Foster and Partners
The design of the UAE Pavilion created by Norman Foster and Partners for Expo 2010 in Shanghai is inspired by the sand dunes of the United Arab Emirates.
The goal of the project is in fact to represent the area’s landscape and desert climate using advanced construction technologies and experiences, with the specific aim of bringing the landscape right into the pavilion building. The pavilion space is shaped like a canyon, formed of curved walls and dividers. The architecture evokes the narrow pedestrian streets typical of cities on the Arabian Peninsula, characterised by an urban structure that ensures natural energy efficiency, and the soft, sinuous forms of the desert. Since 2011, the pavilion’s iconic structure has been a symbol of the annual Abu Dhabi art fair which presents a selection of new gallery owners every November.

Zayed National Museum – Norman Foster and Partners
The winning project for the Zayed National Museum was designed by the international studio of Foster and Partners. Inspired by the dynamics of flight and the falcon’s feathers, the design reflects Sheikh Zayed’s love of falconry and creates an iconic symbol of the nation. In this cutting-edge design employing advanced building methods and materials, every steel feather will contain a gallery in which visitors may explore the history and culture of the United Arab Emirates. The building was designed to minimise energy consumption with integrated natural ventilation and lighting for the five towers employing heat exchange technology; it will be surrounded by water and luxuriant gardens.

Abu Dhabi Guggenheim – Frank Gehry and Partners
The Abu Dhabi Guggenheim was designed by Gehry and Partners drawing inspiration from a Cubist painting and using curious volumes inspired by the greatest masterpieces in the Guggenheim Foundation’s collections. Surrounded almost entirely by water, the building will have a spectacular view of the Saadiyat Cultural District and the Arabian Gulf. Open to the elements – the cones on the museum recall the region’s traditional wind towers, used to provide ventilation and create shade in outdoor courtyards – the design is a combination of traditional Arabian and modern design. The galleries will be arranged around a central foyer on four levels, connected by glass bridges. The museum will have 13,000 square metres of central exhibition space plus 18,000 square metres more inside its spectacular cones. There will also be a 350 seat theatre, laboratories and classrooms, stores, several coffee shops and a restaurant.

The Classical Museum, or the Abu Dhabi Louvre – Jean Nouvel
2017 is the year of the Abu Dhabi Louvre, designed by Pritzker Prize winning architect Jean Nouvel and currently under construction on the island of Saadiyat, only 5 minutes from the capital city of the Emirates. When the work is completed, the museum will dominate the landscape with a gigantic openwork dome capable of regulating indoor light and temperature levels at all times. The dome will cover 2/3 of the museum and be suspended over gardens, lakes, and galleries with a futuristic look; its construction is inspired by the interwoven palm leaves traditionally used to create shade and keep cool while letting rays of sunlight filter through. The product of an intergovernmental agreement with France, the museum represents an Arabian medina and will incorporate 23 permanent galleries, a temporary exhibition space, a children’s museum and an auditorium. It will exhibit art from all over the world.

Sheikh Zayed Bridge – Zaha Hadid
Built between 2008 and 2010 to plans by British/Iraqi architect Zaha Hadid, Sheikh Zayed Bridge has been called “the most intricate bridge ever built” for its futuristic architecture. The bridge, with a span of about 800 metres, has a continuous arch construction recalling desert dunes, and its central carriageway is lit up by dynamic lighting adding a sense of motion to the entire construction. It is the third bridge, in chronological order, to link the Arabian peninsula with the island on which Abu Dhabi stands, spanning the Maqtah canal.

Capital Gate – RMJM
It must be one of the world’s most incredible buildings. Construction began in 2007 and was completed in 2010. It is built on an inclination of 18 degrees, almost four times as much lean as the Tower of Pisa, and Guinness World Records calls it “the world’s most tilted building”. Designed by studio RMJM, it is the property of ADNEC (Abu Dhabi National Exhibitions Company). The tower is 160 metres high and has a total of 35 floors, containing offices and a five-star hotel, the Hyatt Capital Gate, with restaurants, meeting rooms, a reception area, a tea lounge, a spa, a fitness centre, a pool and an outdoor patio. 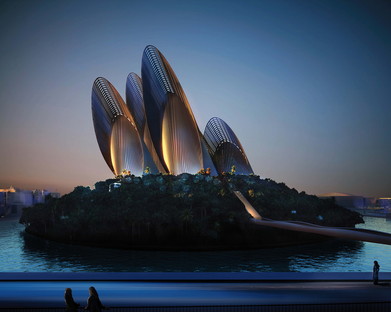 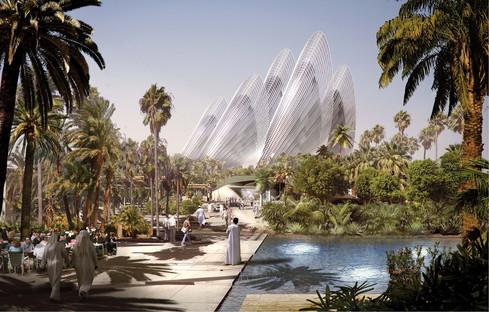 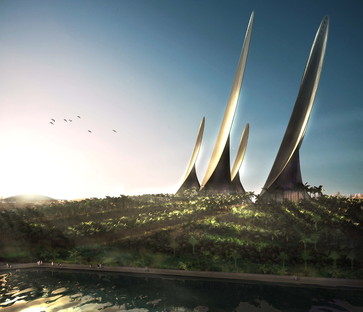 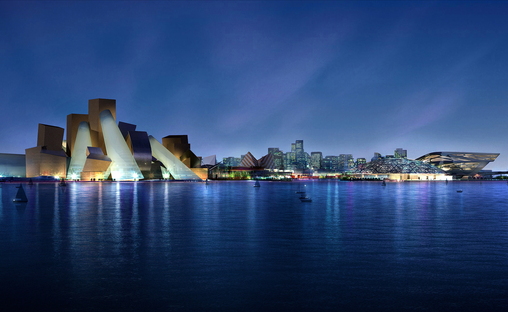 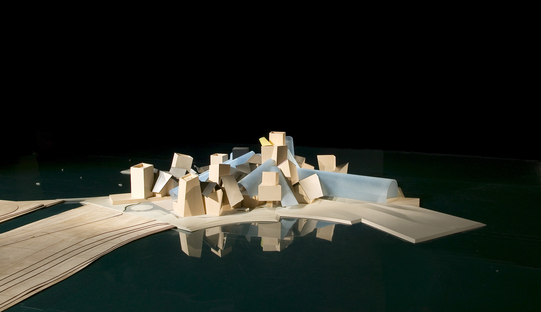 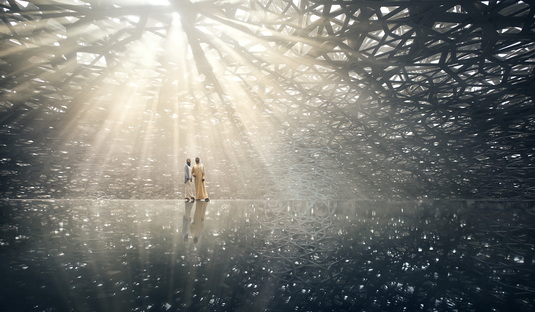 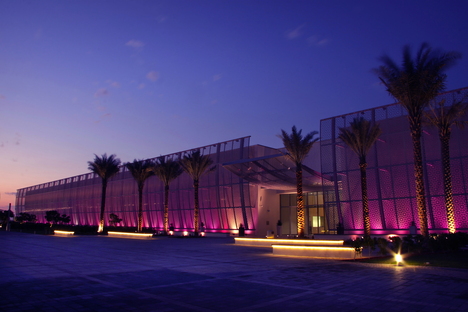 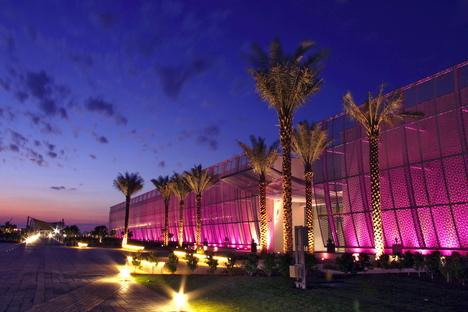 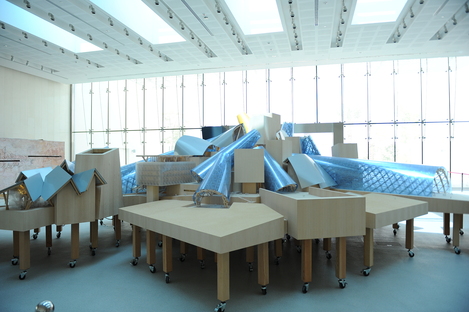 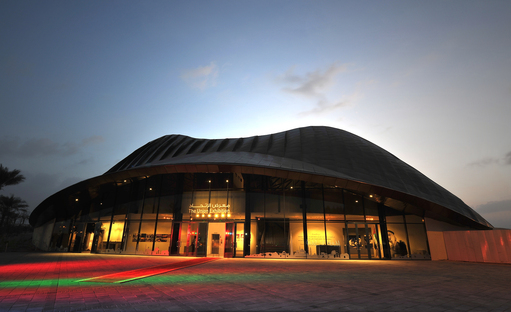 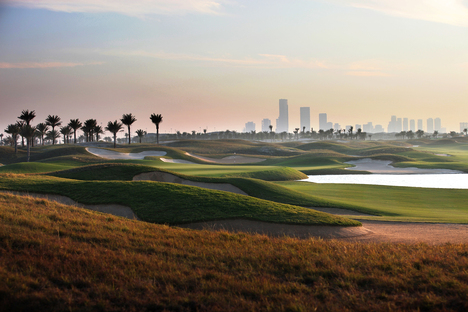 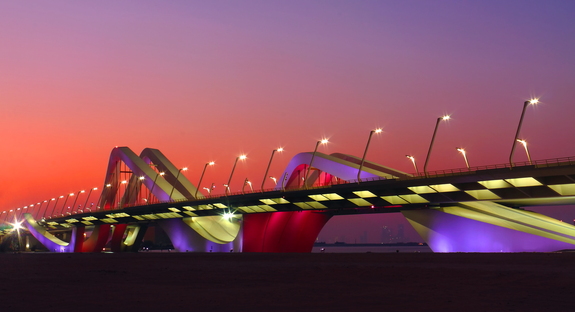 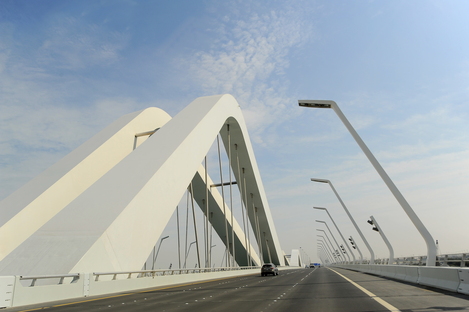