He has been the Chairman of SECI SpA, the holding company of the Maccaferri Industrial Group, since 2007. After graduating in architecture with honours, he worked as a free-lance architect until 1987 when he joined his family’s industrial activity, starting in the Construction and Real Estate field.

He has developed the Group’s activity in the field of renewable energy sources, founding SECI ENERGIA.

In June 2016 he was appointed a member of the Governing Body of Banca d’Italia (Italy’s Central Bank). In June 2011 he was made a member of the Order of Merit for Labour with the honorary title of Cavaliere del Lavoro. 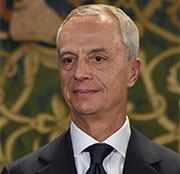