UNIPOLSAI: CULTURE, YOUTH AND ITS ICONS

"Architecture is an omnipresent frame for complex, unexpected and magical happenings”—Alison Brooks. 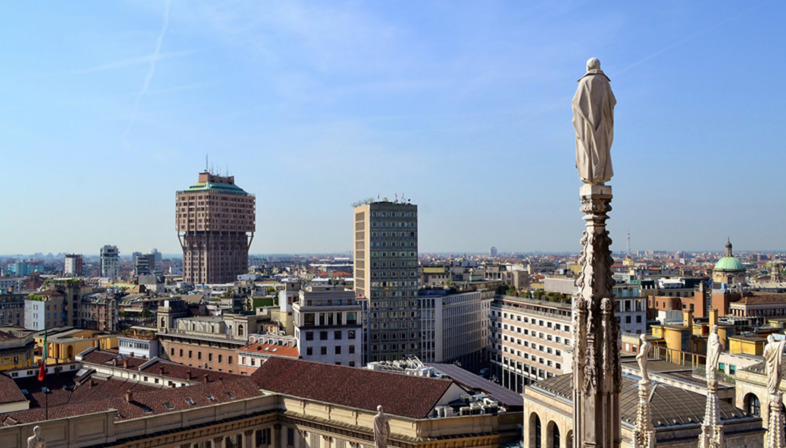 Architecture can introduce multiple meanings and multiple histories that do have collective value. Revitalizing buildings that, either for their history or important position, have played a leading role in the urban landscape, implies the responsibility not only to find ‘aesthetic-formal solutions’ but also strategies more integrated within the social fabric, able to renew and intensify their inclusive strength.

Among the many groups dedicated to valorizing developments with similar criteria, there is UnipolSai, which in recent years has decided to direct its energies to the regeneration of several of the most important buildings in the Lombard capital, helping to recover the catalyzing force they have lost. Leaving aside the internal and external interventions concerning choices of conservative restoration or modernization, I should like to address the proposals that are privileged by this program of transformation.

Culture, creativity and innovation, supported by a careful respect for sustainability, incentives for the young, are the key points, marking a journey that is increasingly making these containers an opportunity for meetings and interesting community experiences. An emblematic example is Torre Velasca, which has always been the center of lively debates, reactions and conflicting opinions, provoked by the boldness of a design that testifies to the enthusiastic adventure of four comrades of the Politecnico of Milan. In the 50s, by breaking the traditional canons, they created something new, something that, as claimed by one of them, Ernesto Nathan Rogers, proposed “to culturally summarize without tracing the language of any of its buildings, the atmosphere of the city ​​of Milan”. The young four, Gian Luigi Banfi, Lodovico Barbiano Belgiojoso, Enrico Peressutti and Ernesto Nathan Rogers, who together founded the Studio BBPR, were able to offer, in an attempt to overcome the consuetude of rationalism, a splendid testimony of modernity, become an icon of architectural excellence not only in Milan but in Italy. 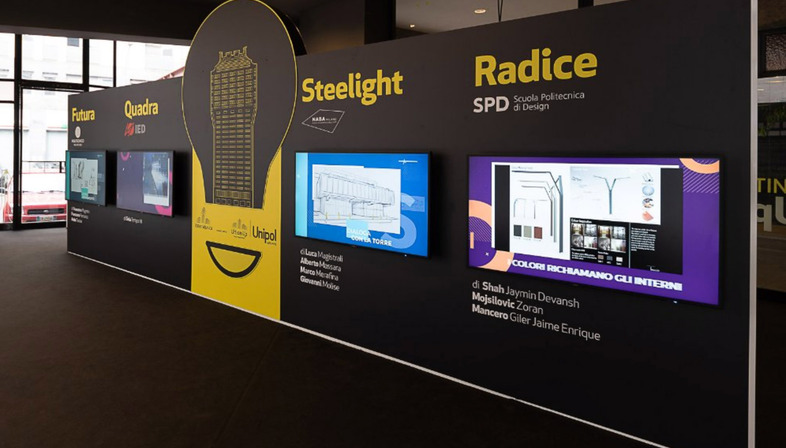 Exalted or denigrated, defined as ‘absolute masterpiece’ by the art critic Philippe Daverio, but also ‘glass and cement grotesque tower’ by the writer Luciano Bianciardi and “paradigm of horror which the Milanese ... look to as the ugly son whom they love anyway”, by Vittorio Sgarbi, ironically called by the Milanese the ‘skyscraper of the garters or suspenders’, due to the characteristic mushroom shape and the prominent tie-rods supporting the expansion of the upper floors, Torre Velasca continues for over 60 years to stand up with unchanged, ostentatious audacity and charm. The beauty of its unmistakable profile, punctually renews within us, with its charismatic presence, the emotion of a first encounter. An avant-garde work that enhances the force of synthesis between great engineering and great architecture with robust rawness. Acquired by the American group Hines, it was until a few weeks ago the assets of UnipolSai, that reserved the first 18 floors to shops and offices, dedicating the other floors up to the 26th to prestigious apartments, with an uninterrupted view of the Duomo and the heart of the Milanese skyline. Ample scenographic openings accompany the fluid layout of the interiors, flooding of light the refined environments of sophisticated design, focused on meticulous attention to details and high finishes, emphasizing, thanks to the presence of loggias-terraces, the close connection with the external scenario.

The tower, revitalized with careful respect for its authenticity, has experienced a functional transformation. UnipolSai, owner of the building since 2012, has started a process to restore its role as a protagonist in national and international cultural debate. Thanks to 'Opening Velasca', the tower has welcomed the city with an agenda full of stimulating cultural initiatives and support for the young.

In the rebirth of new interaction with its citizens, in 2016, in the occasion of a FuoriSalone, an exhibition-event of Ingo Maurer and Alex Schmid, ‘Glow, Velasca, Glow!’, turned Velasca into a spectacular red fire. Light, like a second skin, exalted the extraordinary expressive power of the tower’s imposing presence, transfiguring it into an evocation more metaphysical than real. The light installation, capable of causing intense inclusive moments at an emotional level, has become a sort of leitmotiv, and this year, its powerful geometry stood out in the sky in a new cobalt blue. 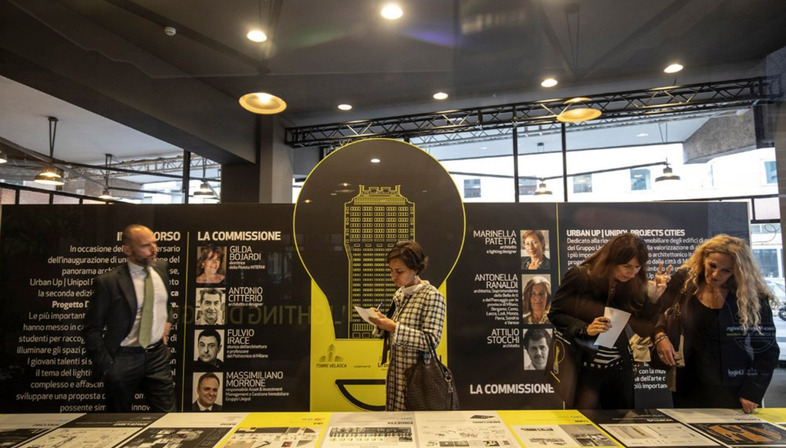 ‘Tower Tales, or design, art & sound in Torre Velasca’, is the title of the captivating program promoted by Urban Up - Unipol Projects Cities, articulated in #ArtTales, exhibitions of contemporary avant-garde works by internationally renowned artists; #SoundTales, musical evenings, dedicated to concerts with the most famous innovative jazz musicians and #DesignTales, a section aimed to encourage the creativity of young talents from the Architecture and Design schools. The competition ‘Velasca Design Project. Idee sotto la Torre’ has inaugurated, in occasion of the building’s 60th anniversary, launching the creation of a light for the public spaces of the tower itself. Recently, Unipol announced the international contest of ideas 'Kid's Factory', open to young architects under 35 from all over the world, inviting them to rethink a former ceramic factory, abandoned for decades, to be transformed into a futuristic campus for children. The prestigious, fascinating complex, one of the most majestic industrial archeology in Europe, 27,000 square meters owned by Group, includes frontal buildings designed by Piero Portaluppi. Participation saw the arrival of more than 400 projects, sent from 90 parts of the globe, demonstrating great interest in the opportunity offered. I find that promoting the creative skills of a brilliant young generation under the innovative gesture represented by the 'young' Studio BBPR, in a frame which is a historical emblem of architectural and technological excellence, has been a very relevant choice and a source of real pride and strong encouragement for the selected.In an increasingly competitive professional panorama, where it is very difficult to start one's own business, praiseworthy is this incentive with which Unipol encourages young people to relate to a more international context, rewarding those who prove to possess true originality. Similar support is provided to school of the sector. The expected prize not only contemplates moral satisfaction but also an economic help, and, above all, the precious opportunity to design something that can be seen realized.
Unipol with consistent continuity aims to use the culture in its multiple aspects as a regenerating element of its properties to which it strives to find an identity or restore the glaze’s brilliance, partly faded. Some buildings will become the focal moments of different specific ambits dedicated to society: excellences in fashion, design and gastronomic tradition will complete the concept of hospitality and the receptive structure with an international cut and strong Milanese DNA of De Cristoforis 6, a new flagship hotel; virtual reality, marked by the most recent, innovative technologies, welcomes the public in Ca’Litta, allowing to interact with the apartments while the theme ‘immaterial material’ has seen a moment of artistic celebration with the intervention of Ivan Tresoldi and his silos-installation inspired by memory and regeneration, in honor of the restoration of a prestigious architecture.
Gio Ponti in 1961 wrote "... a perfect proportion of volumes, in a simplicity of lines whose structural verticality is expressed with wisdom and truth, with classicism", and then added in a correspondence with a colleague: “silvery, beautiful, light, aerial: a beauty”, referring to the so-called 'little brother of the Pirelli skyscraper', Torre Galfa, designed by the architect Melchiorre Bega. One of the last creations of the Group, which will see the light in a few months and will continue the program that Torre Velasca offers us at the moment. 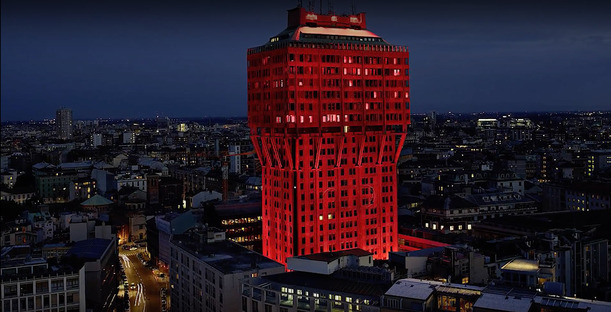 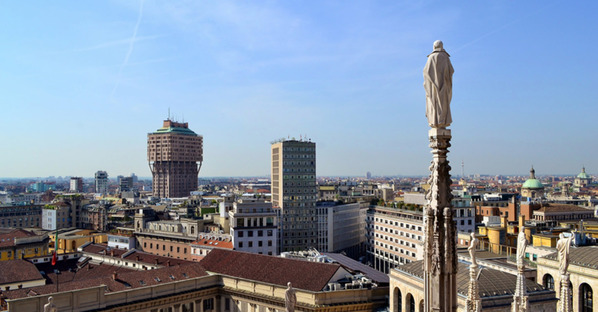 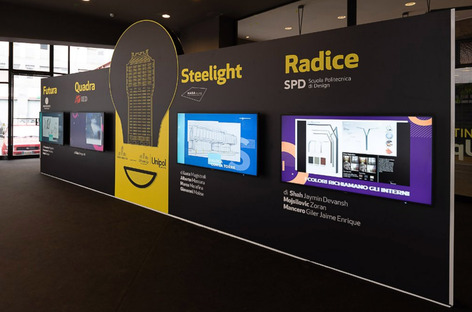 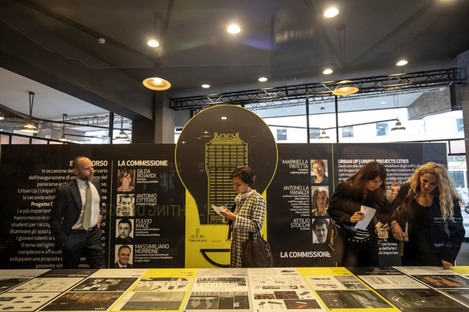 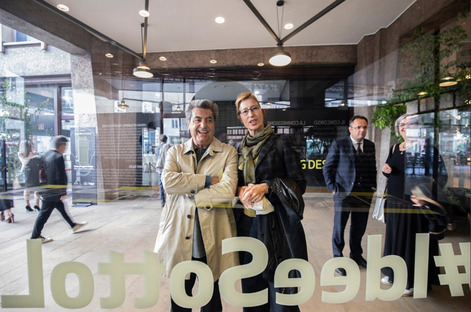 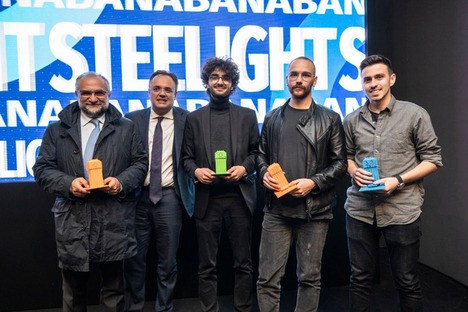 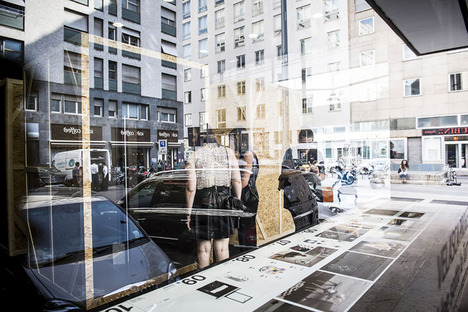 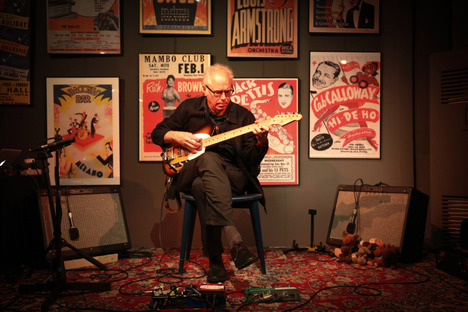 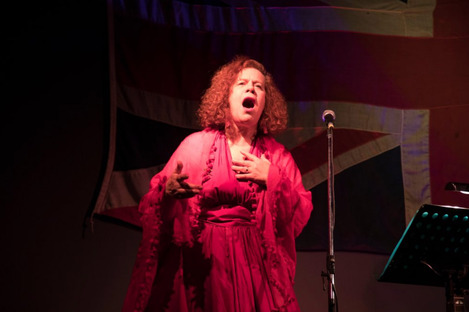 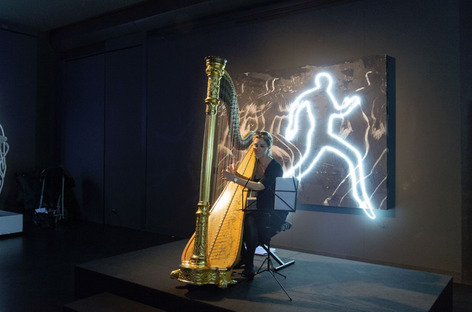 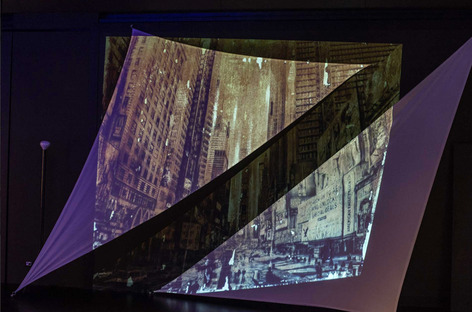 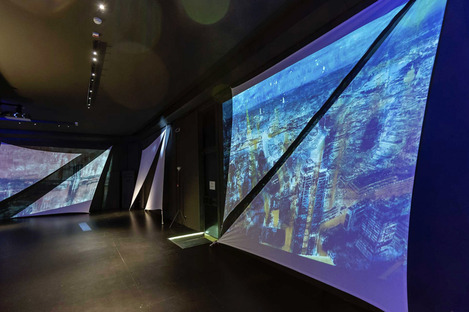 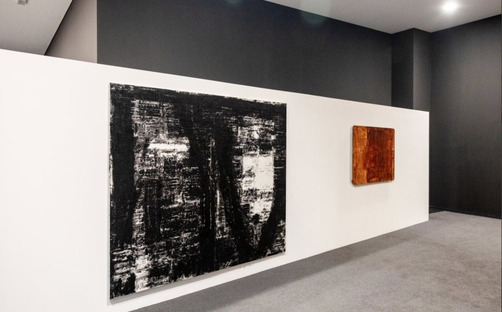 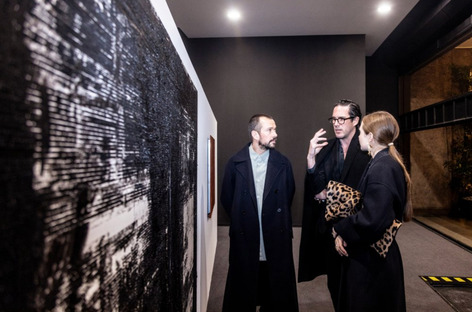 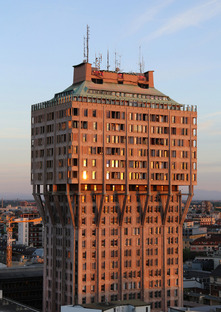 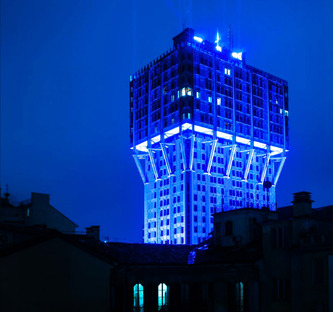 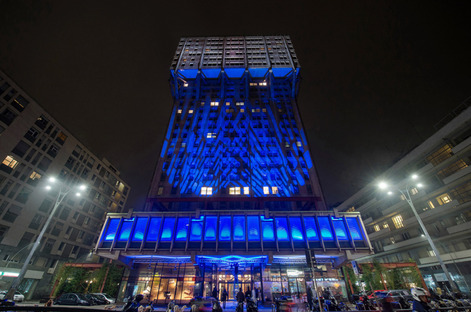 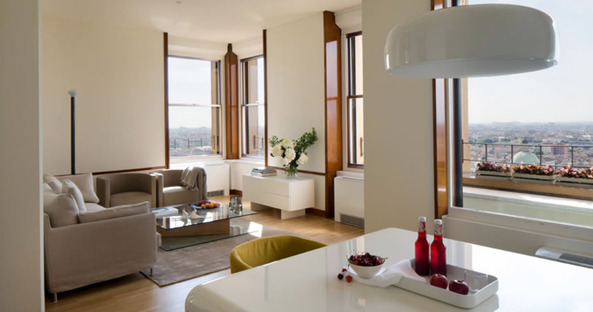 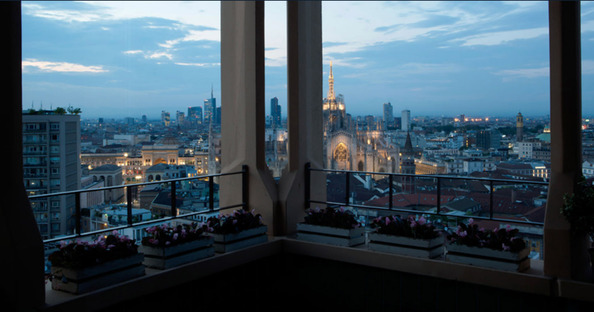 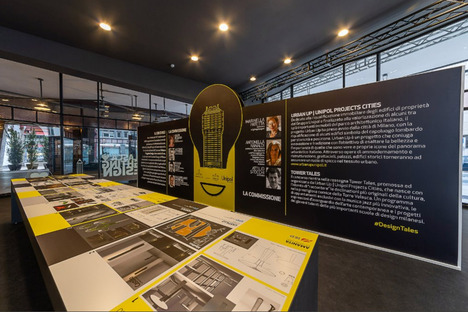