In my previous podcast, I had a very interesting guest, Sean Godsell, an architect who, since he never agreed to conform to the dominant and strongly homogenizing tendencies of a globalized architecture, is mostly described as a free-spirited rebel. This resolute position, that sees him not accepting compromises, does not arise from a presumptuous self-referentiality but from the profound conviction of a respect due to the context in which the project will be shaped. His statements, not sharing stereotyped expressions, make use of lexical elements that never betray the original inspirational source, adapting to a syntax prescribed by the topographical, climatic and cultural situation. 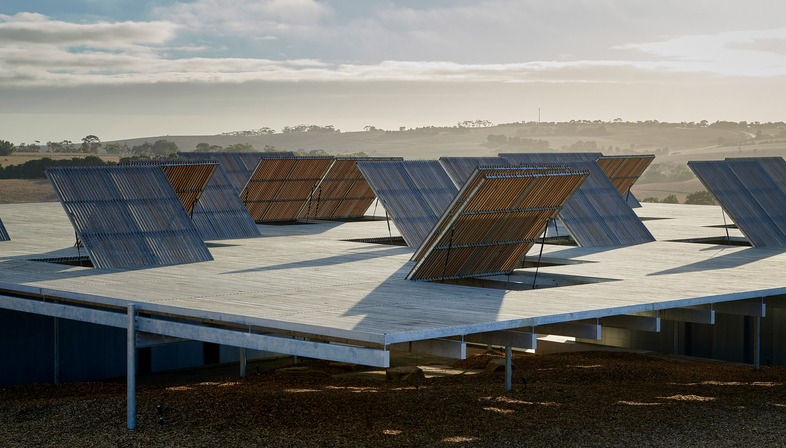 Paused...
In my previous podcast, I had a very interesting guest, Sean Godsell, an architect who, since he never agreed to conform to the dominant and strongly homogenizing tendencies of a globalized architecture, is mostly described as a free-spirited rebel. This resolute position, that sees him not accepting compromises, does not arise from a presumptuous self-referentiality but from the profound conviction of a respect due to the context in which the project will be shaped. His statements, not sharing stereotyped expressions, make use of lexical elements that never betray the original inspirational source, adapting to a syntax prescribed by the topographical, climatic and cultural situation.

Landscapes of extraordinary beauty, wild and isolated scenarios, sun burnt or beaten by violent winds, suggest interventions that intend to recall in their bold primordiality the fundamental function of a house-shelter, a refuge and salvation from the hostile and brutal forces of a nature difficult to control, where  “unfamiliar botanical species could poison and every bite and sting could kill”. Words that remind us of that unforgettable image Chatwin had used to describe the behavior of the Australian Aborigines who, once he had the opportunity to observe, aroused so much admiration in him. “They trod lightly over the earth; and the less they took from the earth, the less they had to give in return”, their feet were barely touching the ground, leaving light traces that 'civilized' man did not bother to imitate, unfortunately leaving more and more evident signs with his triumphant and arrogant steps. 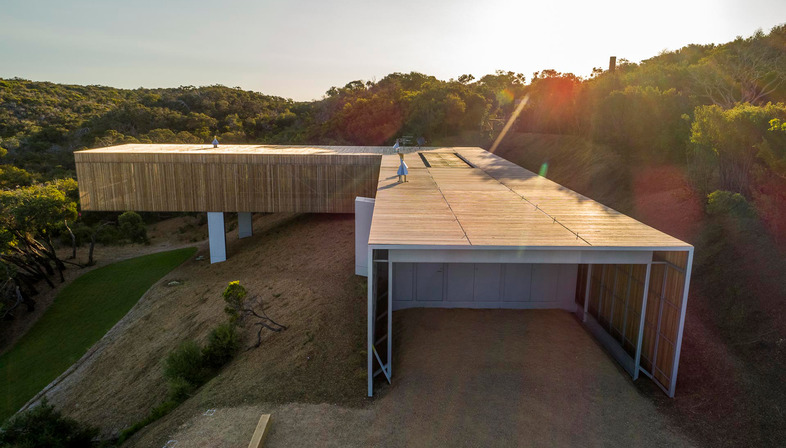 House on the Coast, Sean Godsell Architects. Photo Earl Carter/Courtesy of Sean Godsell Architects.
This is how are generated from the respect for local construction traditions those severe and rigorous profiles, controlled by an almost obsessive tension towards a concise expression, minimalist monoliths stretching among irregular terrains, imagined and represented in preparatory sketches, with the eloquent power of a few traits. Residences in their elaboration embrace two tendencies difficult to reconcile: an aspiration to abstraction, as sublimation of an essential form, in search of an authentic experiential relationship, a continuous dialectic with a natural outline, and a passionate dedication to satisfy, almost as a moral obligation, the imperatives of a sustainable future, that cannot be neglected. An Architecture capable, as Le Corbusier stressed of sublimating and elevating itself beyond the physical boundaries of materials and pure construction, arriving to "touch the heart”, represents the primary ideal effort towards which Godsell’s gestures strive, respecting a passive environmental management with sophisticated technological devices, hidden behind manifestations of apparent absolute naturalness. 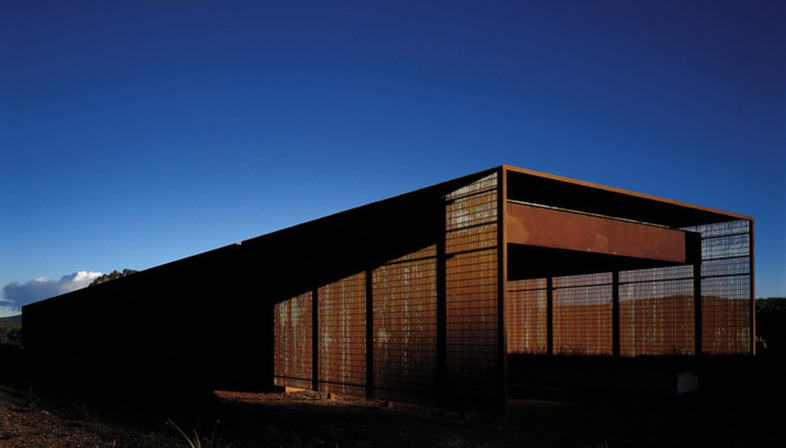 Glenburn House, Sean Godsell Architects. Photo Earl Carter/Courtesy of Sean Godsell Architects.
A particularly raw and crude configuration, a hard exoskeleton, to use a biological analogy that Godsell has deliberate appropriated, protects the warm belly, which is the endoskeleton of his dwellings. Those parallelepipeds that extend between sandy dunes, rusted carcasses, at times buried and camouflaged as if they were an integral part of the land, deceive us with their elemental primitiveness and, when we approach them, enchant us with the accuracy of their details, meticulously studied and hand stitched. The metallic skins that appeared absolutely uniform, rudimentary and compact reveal porous textures, these indispensable envelops, physically separated from the internal space, fulfill a double function, giving a shelter and a lot of permeability, offering unexpected effects of shadow and filtered light. That brutality, that had aggressively hit us, dissolves into a warm, earthy tactile and visual sensuality. 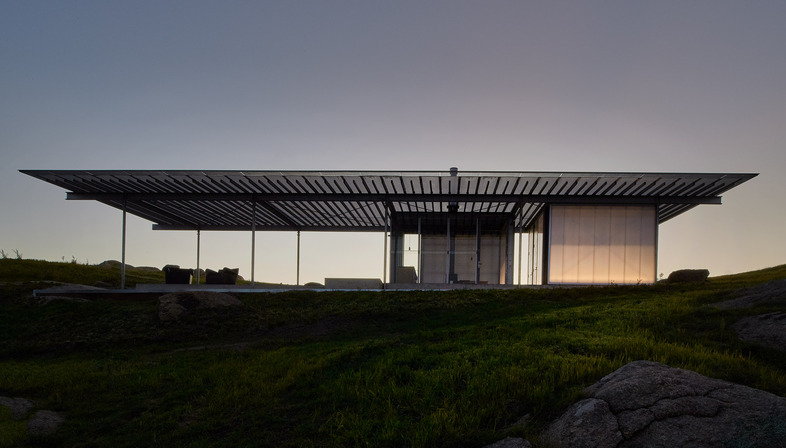 Shack in the Rocks, Sean Godsell Architects. Photo Earl Carter/Courtesy of Sean Godsell Architects.
The wind and the sun, a nature that gradually takes back what was taken from her define the oxidized steel, the recycled hardwood of these sequences of panels, which, sensitive to the climate, organically change the external patina according to the passing of time. An attentive and in-depth exploration of form and materials in an almost symbiotic relationship with the womb of the earth, merging spontaneity and artifice, unexpected and ordered, reaches that narrative that was the coveted goal. Each presence tells a story that is gradually revealed and that with a skilful seductive technique emphasizes the expectation, involving in a game rich of surprises. Small signs, allusive traces constitute an alluring prologue, introducing encounters that let themselves be read and slowly disclosed without ever disappointing the highest expectations. These creations hide a chameleon-like complexity in their deceptive simplicity. A minimalism that incessantly invites to discover new experiences, making imagine much more than what appears to the eye, represents the secret of this great attraction. It is from an apparently irreconcilable dichotomy, the coexistence of antithetical qualities: immobility and dynamism, staticity and flexibility, inheritance and autonomy that an original personality emerges. 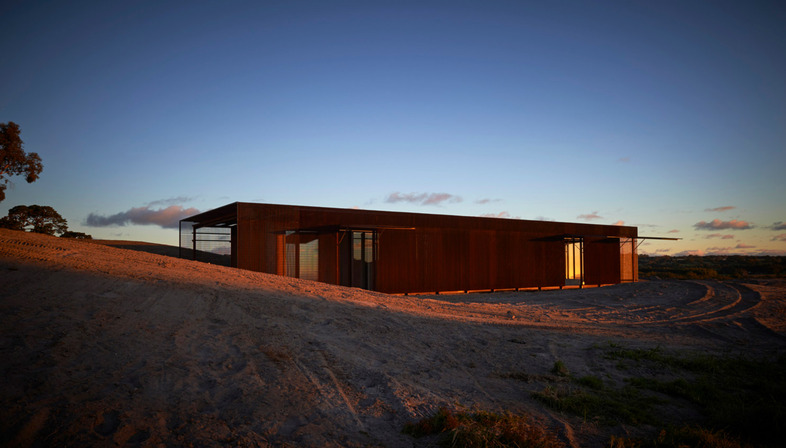 Tanderra House, Sean Godsell Architects. Photo Earl Carter/Courtesy of Sean Godsell Architects.
Another singular experience that Godsell promotes, spreading a message that in its most bare simplicity "touches the heart" of those who know how to listen, concerns the small 'Vatican Chapel', proposed in occasion of the first Holy See Pavilion at the 16th International Architecture Biennale in Venice, in 2018. To the ten selected architects from all over the world had been expressly addressed the invitation to help with their respective interventions a spiritual journey inside the wooded garden in the island of San Giorgio Maggiore, with explicit allusion to the 'Woodland Chapel', designed by Gunnar Asplund. They were given the responsibility of punctuating with subdued but vibrant notes a path meandering through an extremely emotional natural setting. Silence and contemplation would direct a meditation on a concept of religion free from traditional common convention, capable to satisfy the needs and aspirations of the contemporary era.

Godsell responds in perfect harmony with the proposed theme, adopting two references extremely significant for him, satisfying all the requirements with the usual convincing strength of his great coherence. The sources that inspire him are the religious belief of Frank Lloyd Wright, who admits that he has a faith and reveals that Nature is his God, and “a sense of the church as a resilient, dynamic entity capable of surviving thousands of kilometers away from Rome", a lesson that he received during his childhood from the Jesuits, in particular from the example of their missionaries, who brought not only the word of God, but also education, research and culture wherever they ventured.

The regulation to occupy a maximum building area of ​​60 square meters ​is a directive, or rather a decidedly superfluous restriction for an architect who had already decided not to focus on the building itself, but as part of a certain special context that he had reserved to use, and the request to think about a repositionable construction, which could be easily transported and re-erected in another possible location, is equally in line with the idea that  he nurtures about a modest religious edifice, as a dynamic entity capable of fulfilling its function wherever there is a need for it. 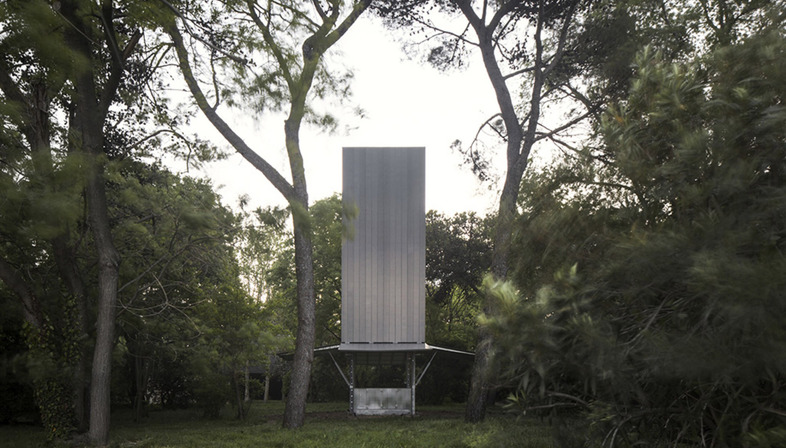 Vatican Chapel, 16th International Architecture Biennale in Venice in 2018. Sean Godsell. Photo Alessandra Chemollo.
With a shape that as always doesn’t make noise, the chapel looks like a tall parallelepiped, with a square plan, approximately the size of a 40-foot container. The verticality that distinguishes it evokes the bell towers that stand out in the lagoon skyline, those audacious, extraordinary pieces of engineering that leave Godsell breathless. It is from this admiration that was born as a tribute from an architect, deeply fascinated by the most refine construction details, the emulation of the surprising construction technique used for these bell towers, erected on wooden piles rammed into the mud. The tower touches with four poles, the absolute minimum, with the lightness of an almost reverential respect the soil of this island, declared cultural heritage, allowing an agile assembling of the prefabricated modules.The apparent rawness of the monolith is contrasted by a series of finishes of a rare refinement, that rigor for detail that is a recurring constant in the production of the Australian architect who, in regard to the elaborate construction techniques required for the occasion, recalls the famous statement by Mies Van de Rohe "God is in the details”.

The long steel-framed structure contributes to perpetrate the semantic lexicon of the ritual of the mass: the lower panels of the four sides, powdered by hydraulic pumps at the moment of the affluence of the faithful, rise simultaneously as portals in the act of invitation and welcome, revealing with a decidedly theatrical process, which recreates the tension of the liturgy, the altar kept inside, touched by a special zenith light. The devots approach and, looking up to the sky, find themselves enveloped by a warm light, unexpectedly reflected by the internal walls covered with golden sheets, a particular atmosphere that re-proposes the mystical suggestion that the interiors of Gothic cathedrals communicate to the unconscious. In this evident symbolic opening towards infinity we read an allusion to the oculus of the Pantheon which, born as a solar temple and converted into a Christian basilica, has seen this opening be interpreted according to the historical-cultural phases, as a means for witnessing an astrological phenomenon or the revelation of a divine and providential light.

There is no space to sit inside the chapel, recycled mooring poles from the canals have been used as pews, distributed around the four external sides, deliberately inducing the congregation to seek contemplation and meditation in the quiet and engaging place. The small built sign is only a physical act, used as a device to make people embrace the natural stage in its entirety: once the faithful gather around the altar, the view slides over the water of the lagoon, symbolizing the large window of a great church which is Nature. The water and the site surrounded by trees offer a very harmonious, irresistibly beautiful combination that the architect orchestrates without intentionally disturbing. 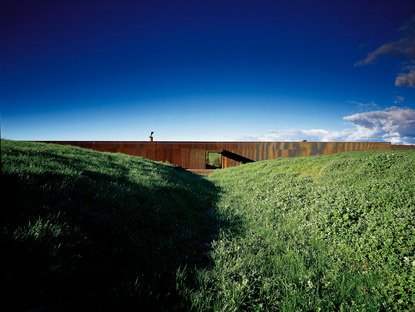 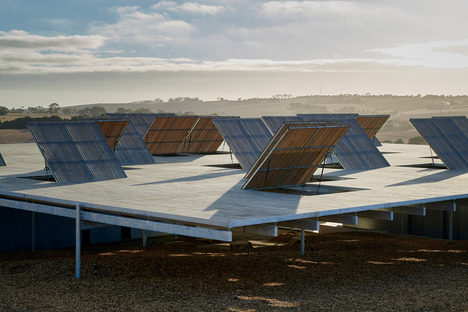 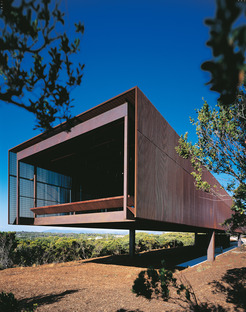 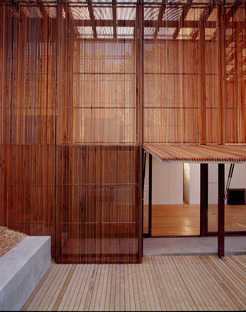 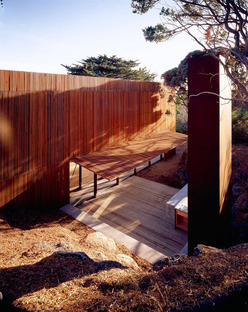 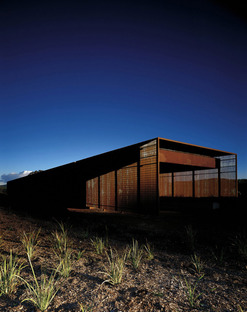 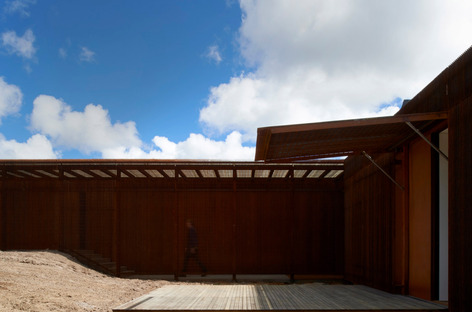 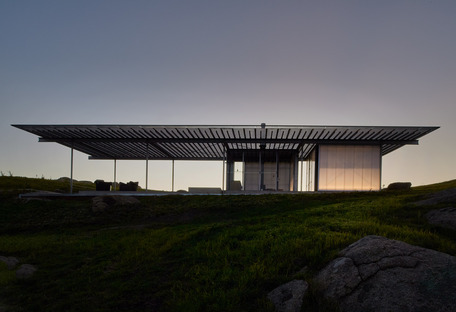 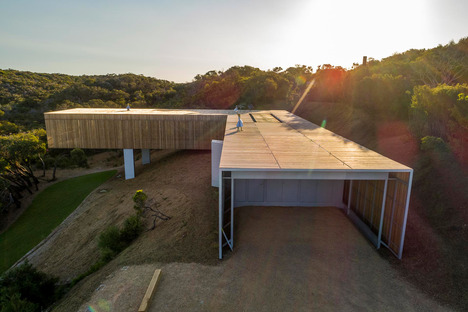 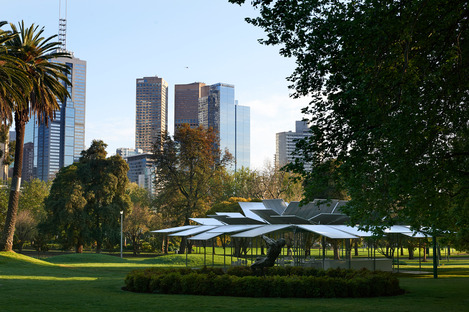 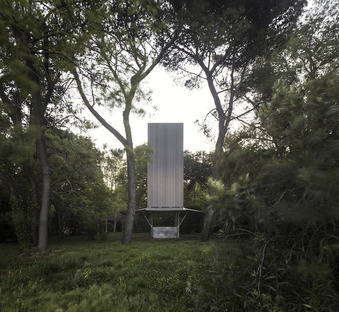 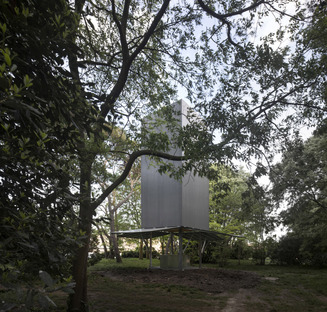 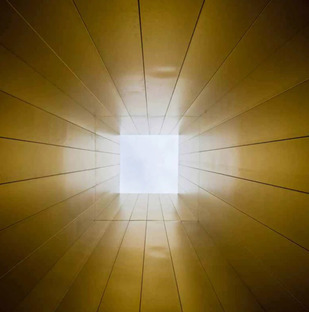