The home and museum of Mariano Fortuny, an artist and designer who never ceases to amaze

The home and museum of Mariano Fortuny y Madrazo, an eclectic genius whose inventions in lighting, fashion, set design and interior design went down in early twentieth-century history, has reopened in Venice. Redesigned by Pier Luigi Pizzi, an architect and great master of theatre direction, Palazzo Fortuny once again reflects its owner’s spirit, suggesting a number of themes for study. 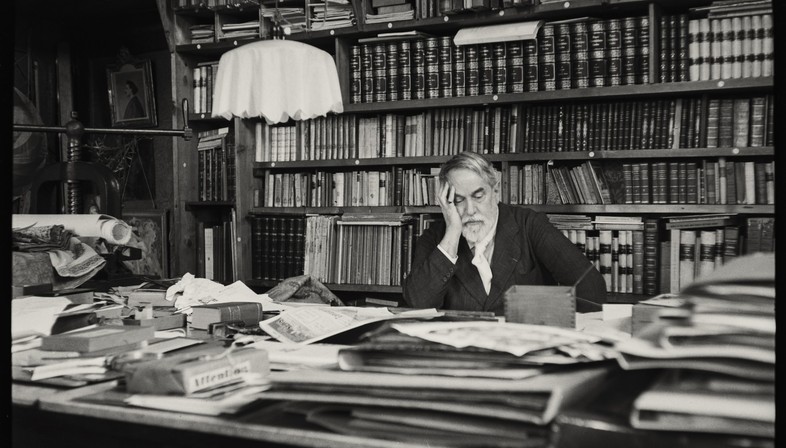 Campo San Beneto, Venice, not far from the Sant’Angelo stop of the vaporetto along Canal Grande. In the clear, calm air of a Sunday morning in April, swept clean by the strong bora winds of the previous night. Pier Luigi Pizzi, a great Italian master of theatre direction and set design, in splendid shape at the age of 92 (he was born in 1930, I keep repeating to myself, fascinated by his quick and tirelessly curious eye), takes me on a voyage of discovery of his latest creation, the new interior of Museo Fortuny. The Palazzo has finally been restored and reopened after the Acqua Granda floods of November 2019, which heavily damaged its ground floor; the work was supervised by the City and by Fondazione Musei Civici di Venezia, with significant private funding. The ground-floor portego and the first floor of Palazzo Fortuny have been open to visitors since 9 March 2022; the second floor will hopefully open in June. The new interior design of the entire complex, in collaboration with Gabriella Belli and Chiara Squarcina, aimed to ‘bring Mariano Fortuny home’, as Pizzi fondly says, ‘recovering ahd displaying the incredible heritage of paintings, books, sculptures, objects, clothing, fabrics, lamps, engravings, drawings and models that had been packed away in crates, stored in the Palazzo and the archives.’ 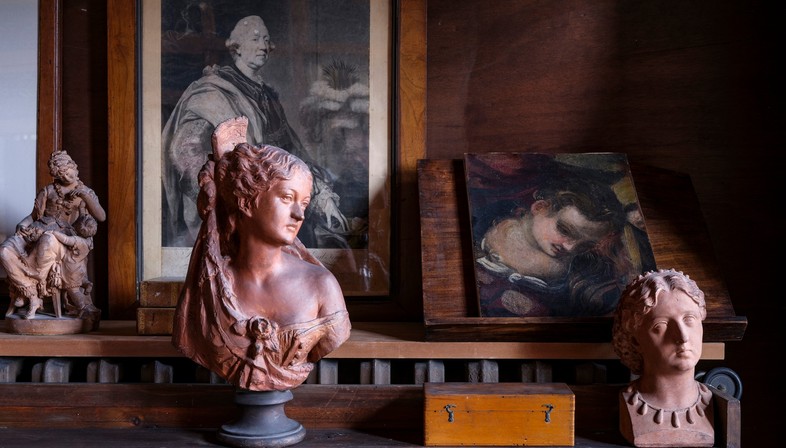 A legacy of inestimable value that had been set aside to make room for temporary exhibitions which overshadowed Fortuny’s impact on the Palazzo, which was his home, atelier and factory from 1898 until his death in 1949. Pier Luigi Pizzi has studied and explored the vicissitudes, thoughts, writings and works of Mariano Fortuny, who was born in 1871 in Granada, to bring the spirit of the tireless researcher and creator back to life, at least in a dramatic sense and in the installations in the building. What makes his multiform personality so unusual, according to Pizzi, is his ability to apply practical invention to artistic intuition, in a spirit that is much closer to design than to art. Fortuny drew, engraved, and painted, but above all, he invented procedures and technologies in a variety of fields, from fashion to theatre and interior design, patenting and registering all his inventions. He created pigments and resins, and the machines for printing on cloth that made him famous all over the world: he patented fifty paints (Fortuny temperas), designed clothing styles that have gone down in history, such as the Delphos gown, with his wife Henriette Nigrin, who was also his muse and partner, and came up with the technologies required to pleat the dress. He invented a dome permitting creation of diffuse light effects for a natural atmosphere on stage, including the look of a cloudy sky. He invented lamps made with fabrics, folding tables, and mobile shelves to contain artists’ paints and brushes with a built-in light. He designed and built the furnishings in the Palazzo, the display cases, the library cabinets, the easels: he was an all-round creative artist who surrounded himself with beauty, culture, and ideas in his Palazzo in the centre of Venice. 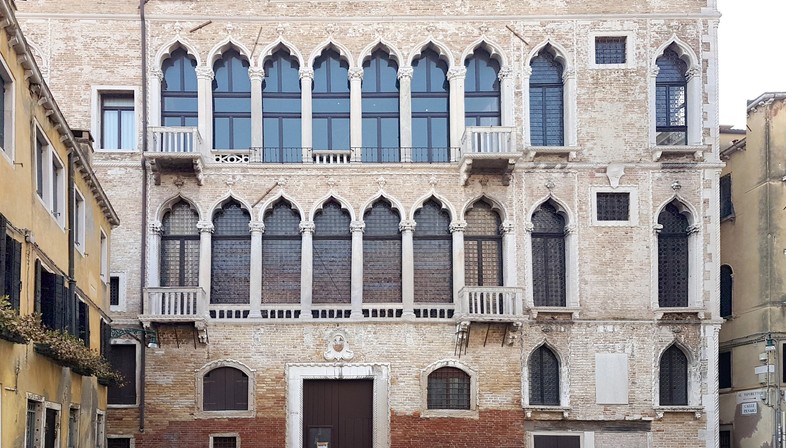 Pier Luigi Pizzi has brought light into the ground-floor portego and the noble hall, the breadth of which is revealed, 43 metres from the windows on one side to the windows on the other. As the day goes by, natural light is supplemented by lighting expertly designed by architect Massimo Gasparon. ‘The hall has been restored to the spirit of times gone by,’ says Pizzi, ‘when Fortuny and his wife received friends, intellectuals, artists, actors, and nobility from all over Europe in these halls. Here they showed them their creations, talked business, and entertained themselves discussing art and poetry’. The sumptuous fabrics on the walls are designed by Fortuny, as is the drapery hanging from the ceiling, just as Fortuny himself depicted it in a painting. 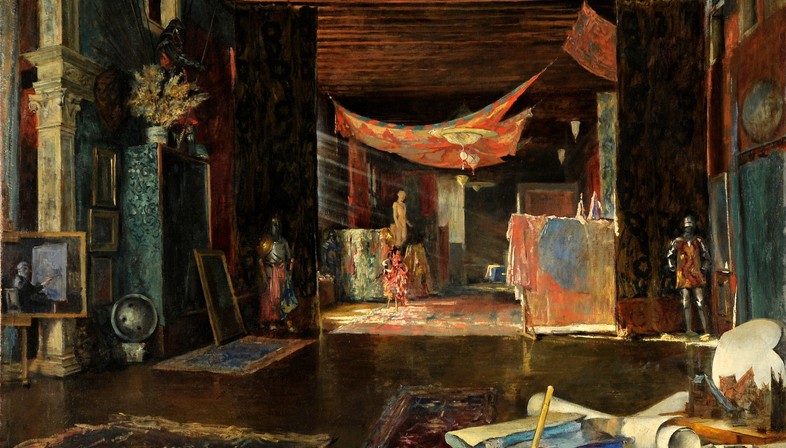 On one side of the hall is the winter garden, with a 140 square-metre fresco depicting nymphs, faunas and winged spirits among garlands of blooms; on the other side is a series of rooms including a hall of fashion featuring famous outfits, a hall of arms containing the ancient suits of armour, shields and helmets that inspired Fortuny in coming up with his creations, and finally the most intimate space: the painter’s studio. Pier Luigi Pizzi exhibits his easel with a seat, a self-portrait, the model’s bed, and the sculptures and animal skulls Mariano copied in his still lifes. This is where we feel his presence, more than anywhere else: it looks as if he has just stepped out, in a hurry, leaving an incomplete drawing on his easel. 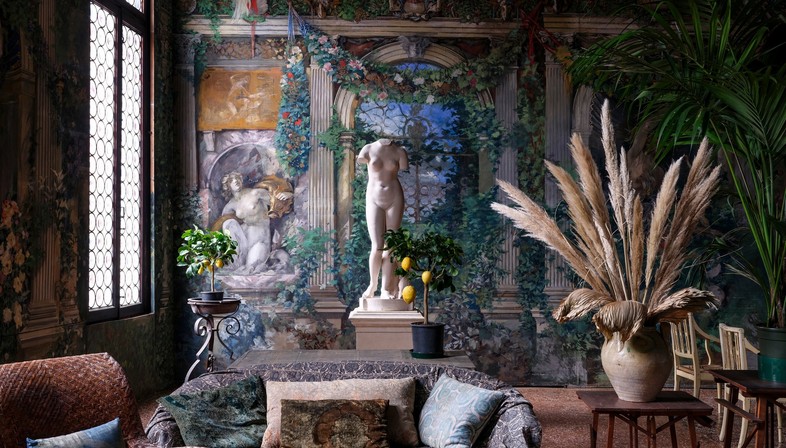 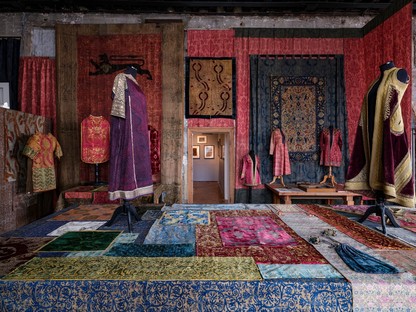 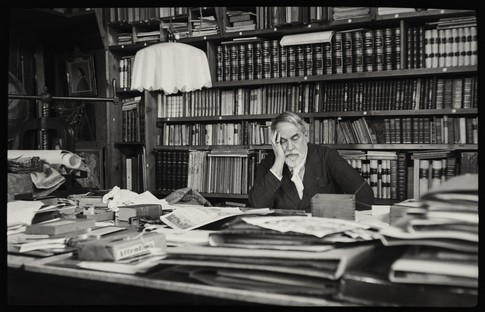 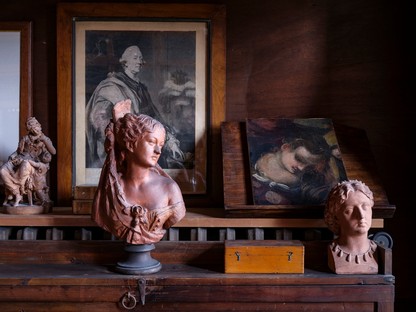 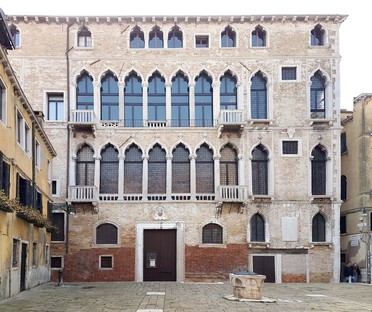 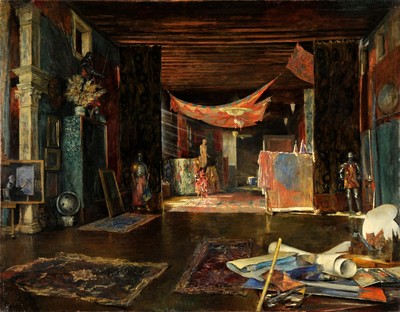 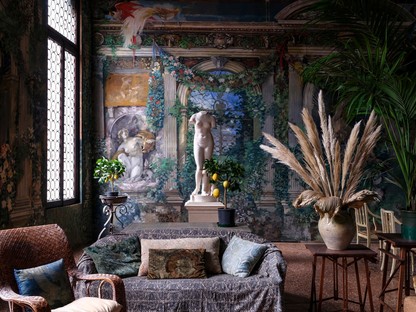 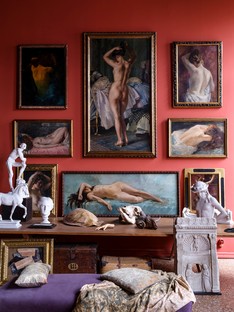 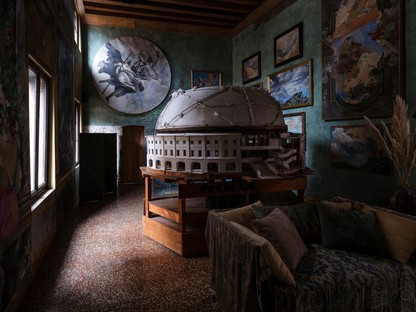 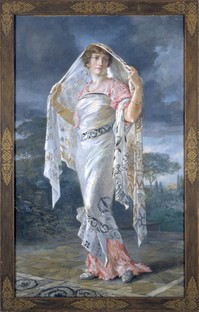 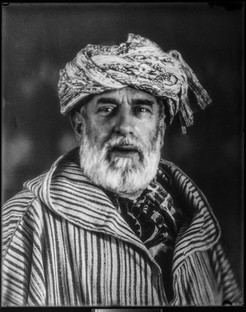 Ai Weiwei in Venice: Memento Mori, a monument to life made of Murano glass