“Understand me. I’m not like an ordinary world. I have my madness, I live in another dimension and I do not have time for things that have no soul”— Charles Bukowski 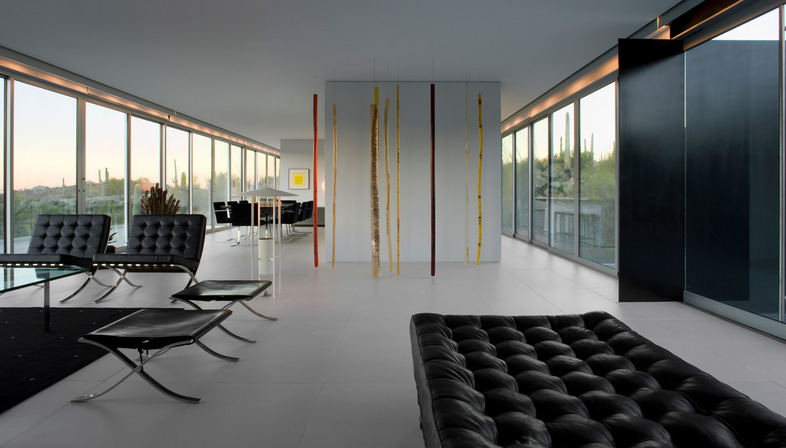 We live in an age in which the incessant and constant search for novelty gives us no respite. Normality frightens us, shunning us away from the courage to accept it, anguished by the idea of ​​remaining in the greyness of anonymity and not collecting enough likes on our social profile. Exaggeration is part of our life: the attempt to amaze and produce adrenaline are the components, not only of a certain cinematographic context, but also of the daily behavior of the majority. The more we exalt the novelty and we idolize the extravagance, aiming to achieve visibility and general praise, the more we align to a banal conformism and, paradoxically, the simplest things acquire a special charm. A friend, in this regard, told me with enthusiasm how much he loved the experience of living, while shooting the scenes of a film in a small island in the Pacific, among people not yet reached by the civilization of consumerism, where a can of Coca-Cola is called 'happiness', representing a pleasure that is not part of the routine of everyday life.

When I talk about courage I do not mean those radical-chic decisions that foresee leaving everything behind to cross a South Sea, and retiring to a Zen monastery in vow of years of silence for spiritual meditation: reactions that last the time of the exaltation. I think of alternatives that sound less rhetoric but authentic, determined by thoughtful reflections, not conditioned by fashions or trends but inspired by ideals and dreams and lived with coherence. Individuals who make such choices generally have very strong characters, are decidedly charismatic and not easy to encounter. They appear very different from those who are not willing to face difficulties and uncertainties, giving up the advantages of an apparently easier life.


However, this summer I had the opportunity to meet a very special person, who during his life has experienced with extraordinary steadiness the courage to follow what was more consonant with his philosophy as architect and man, preferring to the life in the city, with its opportunities and facilities, the solitude of the desert. Michael P. Johnson is, as someone has portrayed “one of the ‘endangered species’ in the field; he is one of the last representatives of artists who have never drawn a line between their life and work, who practice architecture on strong ethical codes and personal convictions”, Aris Georges. Distinguished by a very fascinating physical appearance, tall, lanky and with long, white hair, he emits a strong magnetism, above all for the gentle way of his manners and the energy that he emanates and is able to transmit. 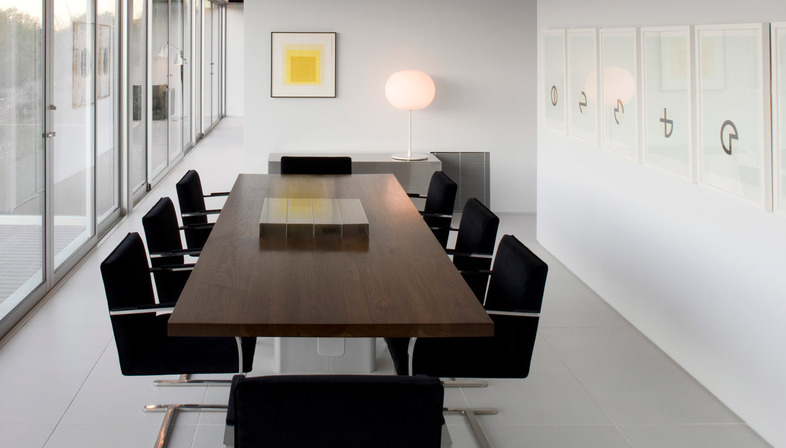 It is not only the uncommon decision he has made, but the life he has lived that have morphed him into a man you cannot describe in a few lines. It is important to retrace certain stages of his biography to learn about the influences that have been important in the formation of his personality. His father, a military man, discharged at the end of World War II, moved with his family to Wisconsin and represents a figure of primary importance in the development and educational growth of the little Michael. In fact, he will expect that his son, only ten years old, read five articles from the newspaper he chooses everyday, to later discuss them together, developing in the boy a political and social awareness as well as the pleasure for reading, interests that will become constant passions throughout his life. Michael will turn into an avid reader, fond about poetry, as well as theology and mathematics, maturing a highly rational and logical spirit that will imprint all the narrative in his works.

Those were the years of the Beat Generation, a youth movement that in the 1950s, in the United States, found its expression by rebelling against the impositions and taboos of a conformist and materialistic society. The forms of protest involved militarism, racial segregation and discrimination of those living in inferior conditions. Literary figures such as Jack Kerouac, Allen Ginsberg, Charles Bukowski and William S. Burroughs became the symbols of this discontent and the aspiration to be more open to our inner needs. A deep sense of social justice forced also Johnson to actively participate in the civil rights movements and toward the desire to have a life more in tune with his spiritual needs, leading him to settle in a small village near the desert, "home to horses, hippies and Harleys ... cowboys ... long-haired folks in flowy clothes…. artists and independent people”.

It will be the great attraction exercised on him, a young architect only 24 years old, by the visionary ideas of Paolo Soleri, to persuade him to encounter the colleague-philosopher on the desert plateau of Arizona, while he was engaged in the construction of the city of Arcosanti, based on the concepts of ‘arcology’ (architecture and ecology). From a communion of sharing needs of preserving the natural habitat and reducing energy resources, between the two grew a long friendship and a love for the desert, that will last a life time for Michael.

As far as the professional field is concerned, Johnson remains at first fascinated and influenced in the early works by the organic architecture of Frank Lloyd Wright, preferring natural materials, such as stone, wood and plaster, always trying, however, as he himself will say, to 'strip' the Wrightian style up to the expression of the Modern Movement of Mies van der Rohe and Walter Gropius, in order to find a perfect consonance between the theoretical principles proclaimed by rational and functional architecture and his social ideals. Keeping the integration to the environment by simple lines, he will come to prefer the sleek durability of iron and glass. 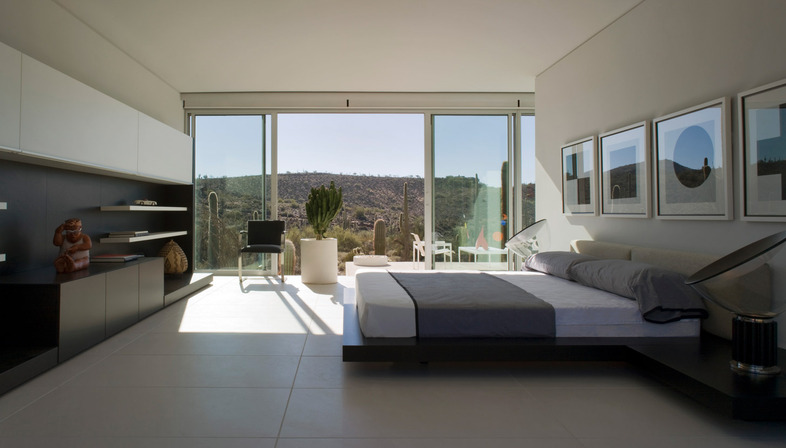 Maintaining the ideals of the past, those of a generation a little outside the box, who dreamt of reaching a happier, and more spontaneous world, more in harmony with nature, he chooses to live in the mist of the Arizonian desert, in Cave Creek, isolated from the chaos of the metropolis. Here he finds a strong empathy with the harsh and inhospitable, arid and essential nature, which does not concede distractions but helps to reflect on the mystery of our existence; he finds also a means to polarize on moments of slowness and rare beauty, on the subtle changes of light, color and texture, the attention of those who turn to him, entrusting him with the task of designing a house. Balancing aerodynamic geometries, developed and adapted to the landscape, austere forms, often cantilevered, that challenge the gravity, under the control of practical decisions determined by climate and environment, his creations express grace and elegance, proportion and scale, marked by a minimalism that speaks of ecological awareness, sustainable materials, frugality of life and refinement of details. Johnson cultivates light, comfort and functionality, shade and ventilation as constitutive elements of the interactive fabric that rigorously intertwines the DNA of his ethics. Housing projects such as Ellsworth, Parr, Bradley and Yoder Residences, strong and subtle gestures that dialogue with the context through the use of an ecological diction, impress for the power of their purity and linearity, due to the contrast between materiality and lightness. They have often been chosen for projects of photographic sets for ‘their sober sophistication, bold simplicity, balanced proportions and sleek industrial surfaces’, essentiality free from ornamentalism, offering absolutely neutral and unobtrusive backgrounds and platforms, that help to read the pieces of art and furniture chosen. The cost of the exterior for a building must not exceed, according to Johnson's ideas, that of the interior which, free from decorativism and mostly monochromatic, with a predilection for white, enhances the vastness of the space and welcomes without compositional hierarchies moments of personal taste.

Firm in his environmental belief to live coherently a green life and not just to talk about it, Michael drives 35 miles, the distance that separates Cave Creek from the city of Phoenix, once a week, concentrating appointments and errands, not willing to make any exception. A very admirable example to follow, in a moment of ecological crisis, which requires a bit of sacrifice from all of us. 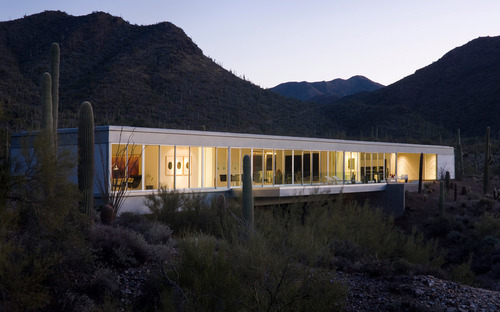 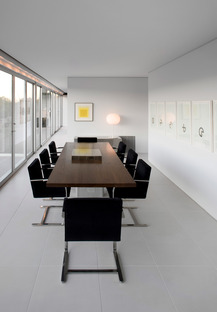 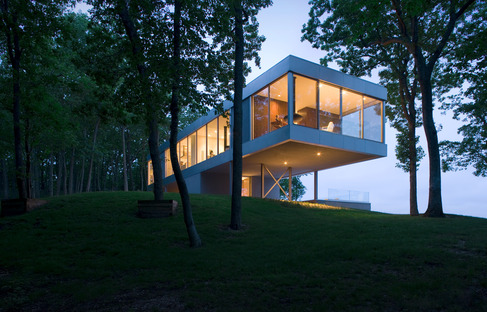 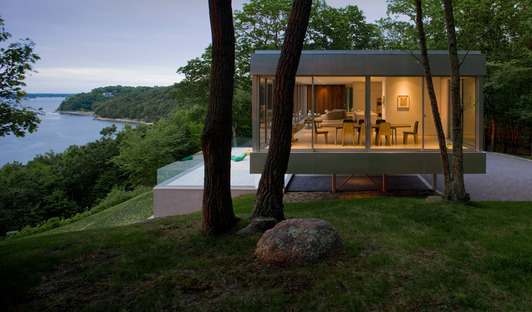 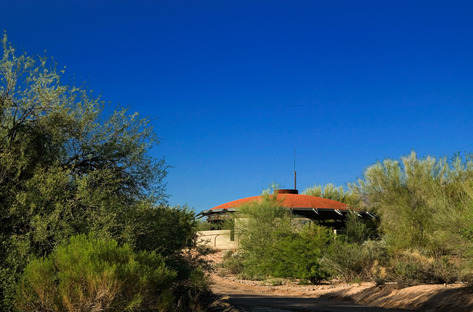 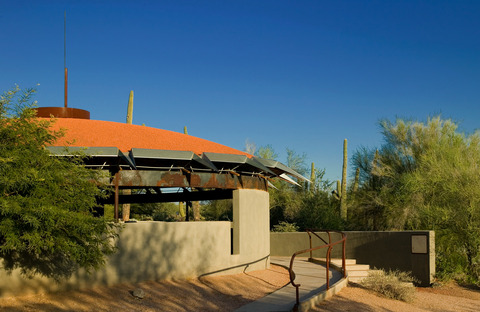