A complex, dreamlike and surreal installation recently invaded the Milanese spaces of NonostanteMarras, the showroom and gallery of the fashion creative who is fascinated by discarded materials and objects: ‘Generation, Re-Generation, Post-Generation&’ - as Marras has dubbed it - was designed to lend weight to the practice of regeneration, starting with ceramics. 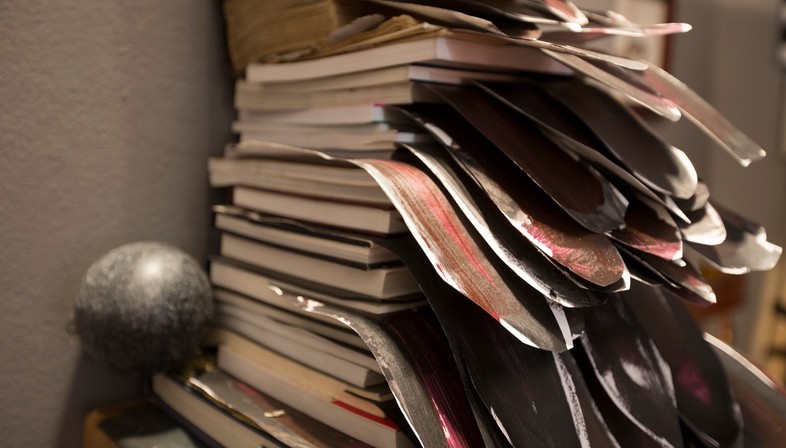 Antonio Marras defines himself as an animist, a seeker of things, a reanimator of waste products. A tinkerer, a rag-and-bone man, with a dash of poet thrown in. ‘Then, of course, I also make these rags of mine,’ he added, almost as if to justify the work for which he is so widely renowned. He guides me through the various spaces of his Milan workshop, illustrating in detail the many installations set up for Design Week. Marras pauses thoughtfully to explore materials and objects; he does not speak of meanings, nor does he associate lofty ideas or concepts with his pieces. He simply describes the creative process and tells me where he procured the materials. These installations have a strikingly dramatic presence: their sheer evocative power is enchanting, echoing with the memories and stories with which they are imbued. They are art in its purest form, living a life without words, without commentary. There are two constants here: first, the reclamation of everyday objects - or rather, pieces of them: drawers, books, frames, chairs, tiles and scraps of ceramics, headboards, mirrors, suitcases, worn-out frames, painted canvases, stained pages of old books, used footballs - and second, the colour palette: ivory, black, brown, burgundy in its richest, densest shade that has become his signature shade. 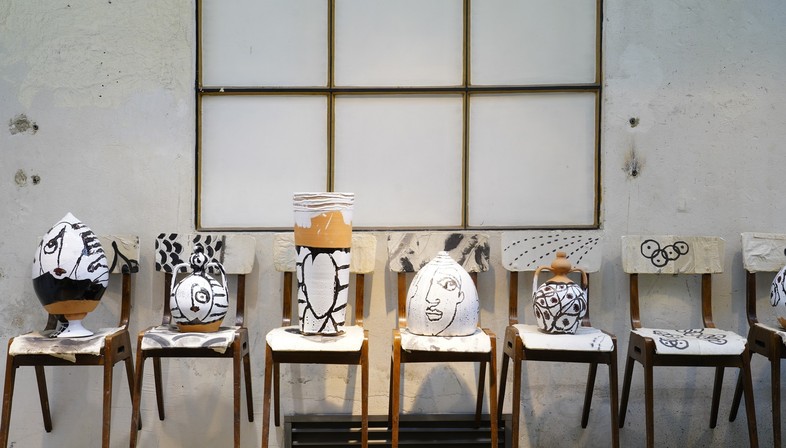 From unearthing discarded objects to composing them into a piece, the entire process is a work of art: there is a tower of suitcases entitled ‘Scale sconvolte’ [‘Disrupted Stairs’], with an accordion at the base and a small model boat placed on top; there is ‘Teresa, Jana portiera’ [‘Teresa, Jana the Goalkeeper’], an old disassembled loom, found in a tiny village in Sardinia, in which Marras has hung five footballs covered in fabric (once the playthings of his children when they were young); there is ‘Malelingue’ [‘Slanderers’/‘Evil Tongues’], a totem pole of sorts made up of a tall stack of old books with paper and fabric tongues sprouting from between their pages, with a white first aid kit at the very top. But the collection continues: there are also paintings turned the wrong way around, their backs adorned with old pages of the Gazzetta Ufficiale or a small papier-mâché leg or arm - perhaps belonging to a cherub or angel - salvaged from a craftsman in Lecce who was about to throw them away. Unsettling presences redolent of votive offerings. 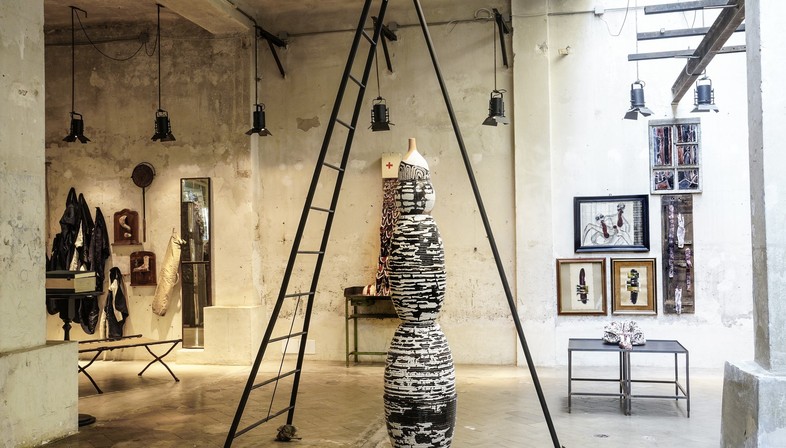 Then comes a series of ceramics: vases, baskets, pine cones, tiles of all sorts. Ceramic is unquestionably Marras’ material of choice: “It allows me to mould things with my hands. Touch is such a fundamental sense; touching is a physical need, an urgent requirement. I remember driving my mother up the wall as a child because I would touch everything, and of course every so often I would break something. For me, ceramic is like a blank sheet of paper. I sit by the potter’s wheel and together, we craft our vases”. Marras engraves lines into the white glaze of his vases, bringing out the bold black layer underneath; he uses this technique to outline faces, hands, figures of all kinds. Hands are ubiquitous in his work: “I have a deep obsession with hands - they appear in my drawings and also crop up in my ceramics”. A whole row of ceramic creations hangs on his wall, each with an arm joined together with string, just like the paper dolls we would all cut out as children.
And as the designer-cum-artist tells his story, his hands perpetually dart around as if to accompany the accents, almost moulding his very words: “For me, creating ceramics has become a moment of non-thought: when I’m crafting it, all the cares that gnaw away at me every day simply fall away,” he adds. In a corner stand the majestic totem poles created for the Museum of Ceramics in Mondovì, made up of a stack of vases crowned with figures of deformed roosters. “I take these animal shapes in my hands when the clay is still soft,” says Marras, “and then I mould them, reinventing them with imaginative plasticity”. 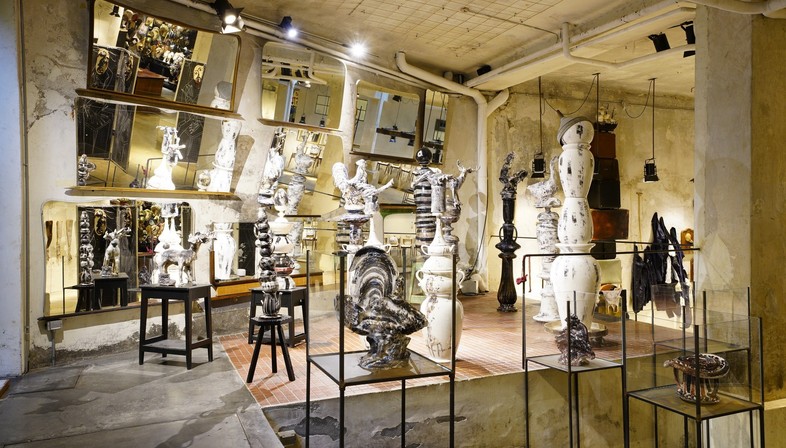 The character in whom Marras has identified his path of regeneration is called Cerchino (roughly ‘Little Seeker’ or ‘Little Circle’), the opposite of Pollicino [‘Tom Thumb’]: whilst the latter sprinkles crumbs and pebbles as he wanders, Cerchino (the artist’s alias) picks up anything and everything he comes across to give objects a second chance at life. “Cerchino loved pieces of copper, rusty iron, metal of all kinds,” goes the fairytale that accompanies the exhibition. “He was crazy about ceramics, terracotta and porcelain. He loved used, old, dirty and stained sheets of paper, books, pages of writings and drawings and paintings by unknown artists which he could work on, insert himself into, add to and change, making them into something other than their original mission. Cerchino hated waste, indifference and misuse”. As I gaze at the circular tower made up of old drawers that takes centre stage in the showroom, surrounded by clothing, Marras’ way of thinking suddenly becomes clear to me: there is value inside everything, and our job is to seek it out, salvage it and restore it. 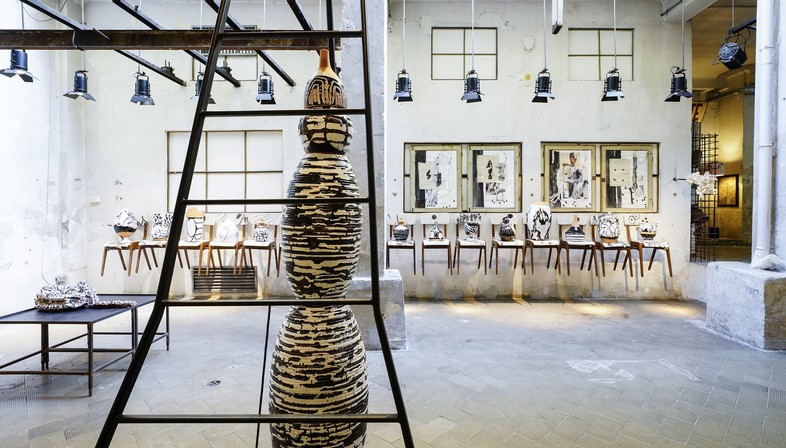 Captions and credits
All images are courtesy of Antonio Marras

01 Portrait of the Artist

03-13 Generation Re-Generation Post-Generation, installation by Antonio Marras for FuoriSalone 2022 in the NonostanteMarras space at Via Cola di Rienzo 8, Milan. 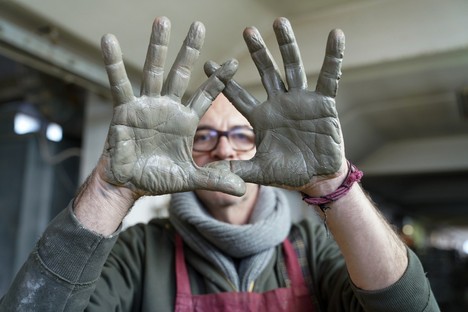 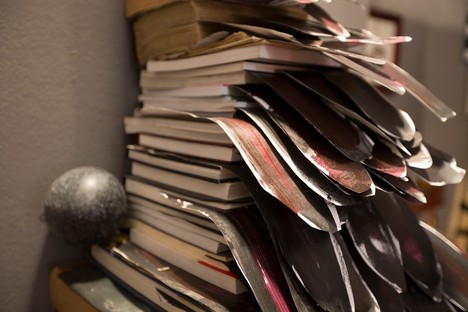 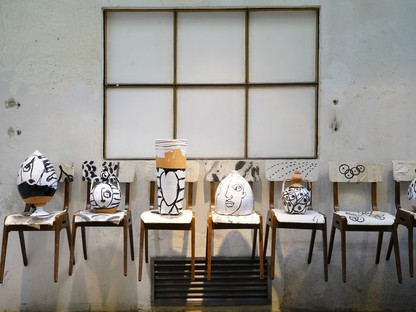 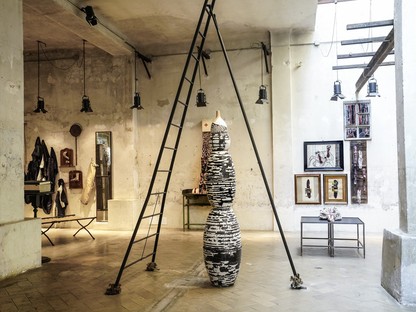 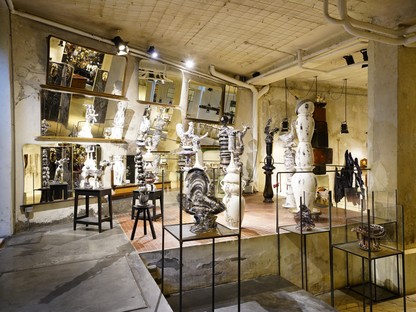 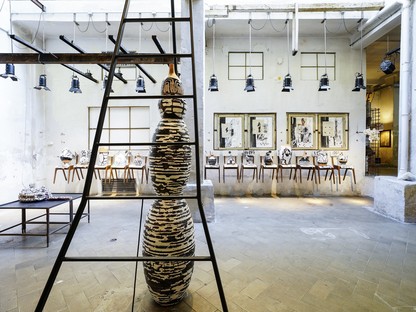 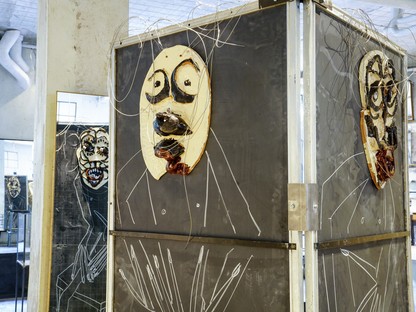 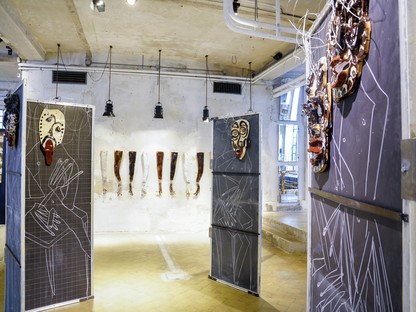 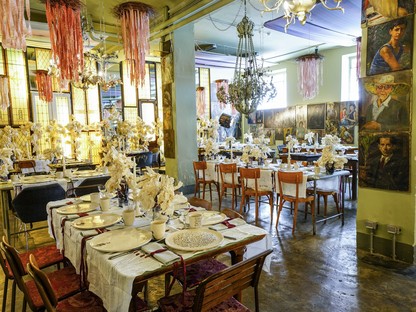 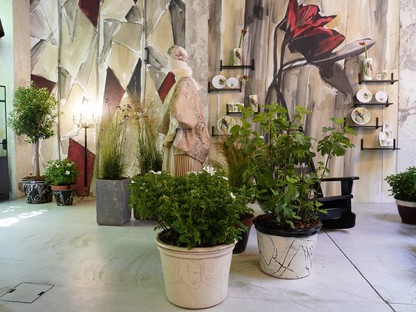 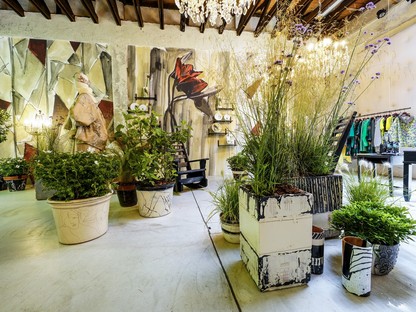 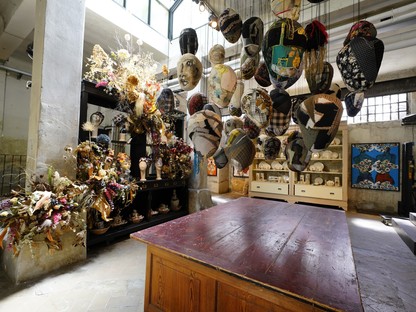 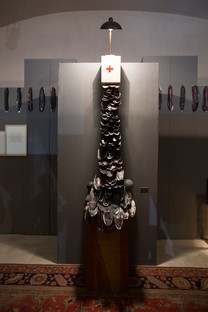 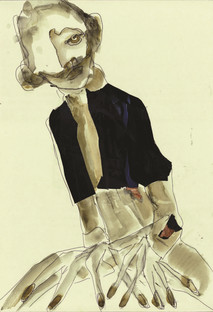