Wall Architects’ new village centre commissioned by the village committee of Sanhe, China symbolises the spiritual rebirth of the community. The young studio Wall Architects has designed a light, undefined structure of bare concrete and bare and white-plastered brick. 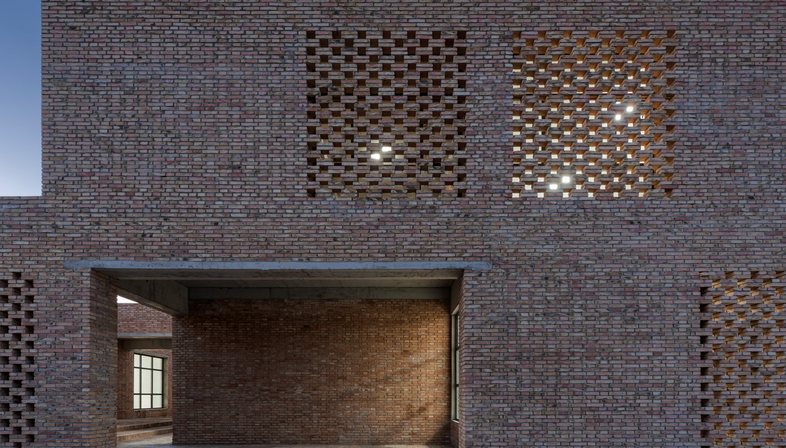 Young Chinese studio Wall Architects, founded in 2017, has designed a new civic centre for the village of Sanhe, in Fuping county, Shaanxi province, China. Wall Architects’ project is hard to define from the point of view of western culture, because it is a public space for the community in which commerce has a limited presence and the attempt to define the historic identity of Sanhe prevails.
In this building the architects of Wall Architects begin a voyage of exploration back in time, to trace the essence of life in Shaanxi territory, touching on the area’s social traditions and material culture, such as age-old local building techniques.
Here, the fast-growing, unscrupulous modern China that absorbs other cultures and turns them to a profit, without distinguishing between spirituality and the market, between East and West, between euphoric dynamism and crude reality, seems light years away.
The history of the farmers of Shaanxi is very real, a harsh, humble, modest reality that has been suspended, in which a historic abundance of raw materials has not prevented the community from losing its local values and identity.
But now that the new China once again recognises the value of spirituality and cultural heritage, the village is again seen as a public reality and a proud community. The completion of the new civic centre aims to relaunch the connection between spiritual tradition and material culture. The key to this renewal is rural, traditional architecture that draws on history to construct new kinds of spaces. The project aims to satisfy the fundamental material and spiritual needs of rural residents while at the same time leading the way toward a new form of construction of public works.
The Sanhe village committee, an expression of local democracy, made the decision to build the new civic centre. The village is the fifth level of administrative subdivision in China, and the village committee is an informal administrative body entrusted with implementing the policies and decisions of superior local and central authorities. Committee members are elected directly by village residents and exercise functions concerned with various aspects of residents’ lives, including public security, family planning, health, culture and education.
The new Sanhe village centre thus becomes a metaphor of a new “village" like an aggregation of cells including senior citizens’ housing, a rural medical centre, exhibition spaces illustrating the village’s history, an information centre partly dedicated to rural industry, a cultural centre, a reading room and a studio with annexed dining facilities. The new complex is located outside the historic centre of the village of Sanhe, surrounded by farmland, as if to represent a new centre for the settlement, a new village emphasising the functions of the traditional one in a better-equipped space.
The civic centre stands on two levels with a strong horizontal orientation. The first level is a single rectangular block interrupted by numerous windows and two passageways, which are treated like little green courtyards to provide breathing space between the building’s two parts. The second level occupies only a small block, towering in the centre like a sort of turret, while the rest of the space is used as a patio.
The crude concrete structure is mitigated by intersections with bare brick walls made of a traditional rough brick in a thousand different hues, painted white in some places. All the poetry of the new spaces for the spirituality of the village is expressed in blades of light between the open brickwork separating the spaces and functions in the centre and the admirably drawn perspectives between the spaces. The old world meets the new in this centre for culture, work and exhibitions, like a public plaza in the village centre which is intentionally left undefined, like a blank page with plenty of expressive potential. 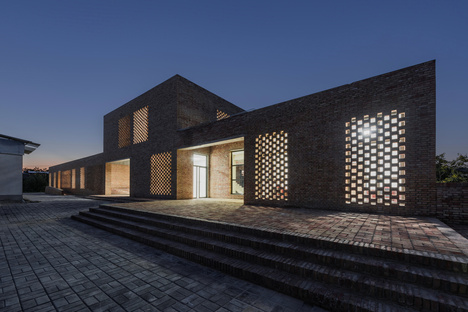 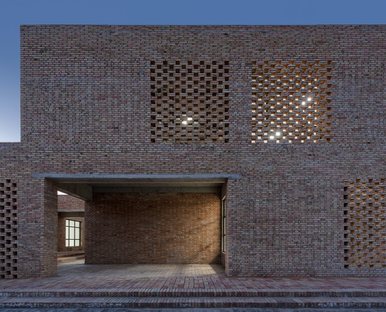 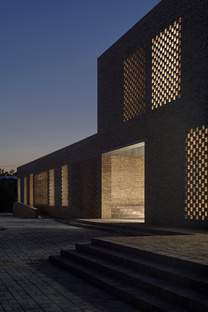 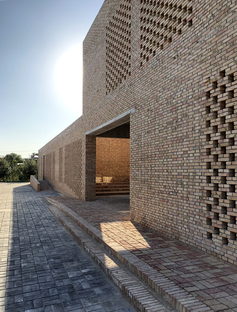 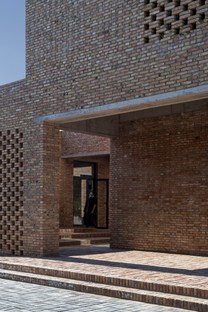 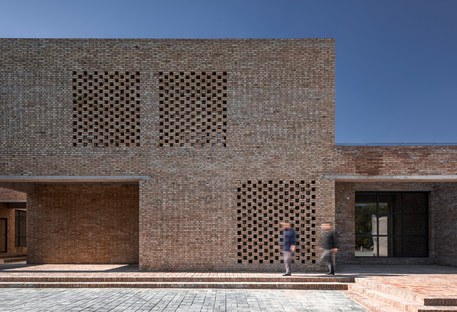 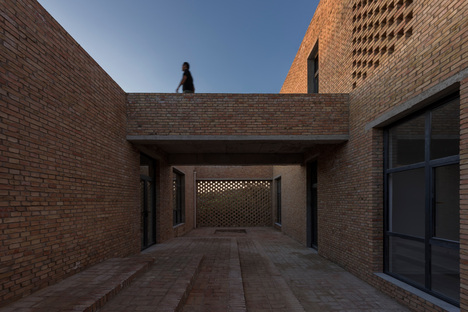 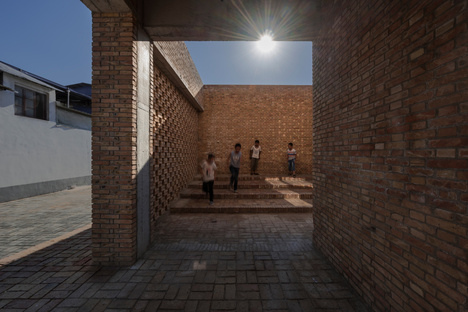 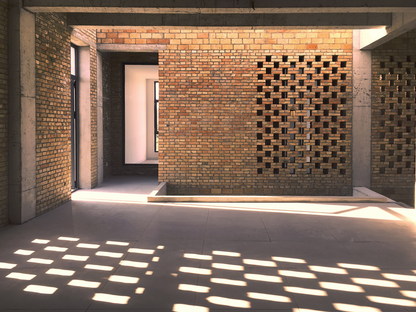 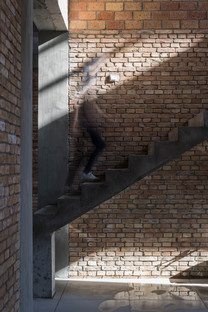 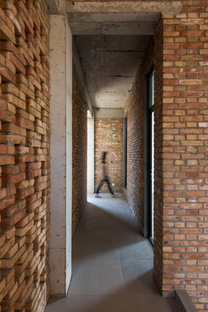 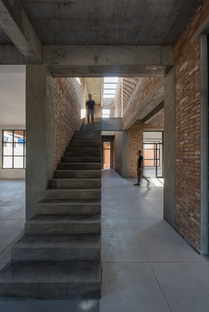 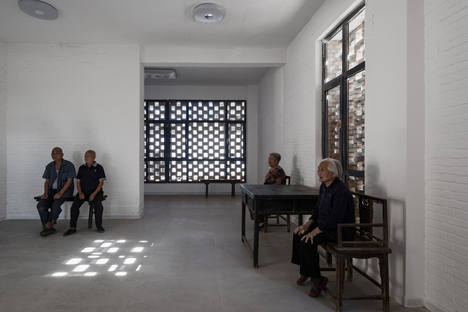 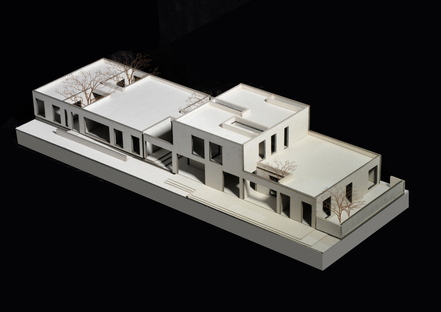 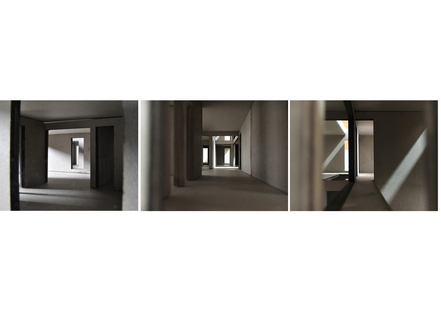 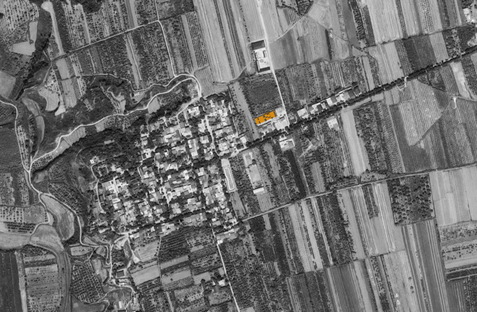 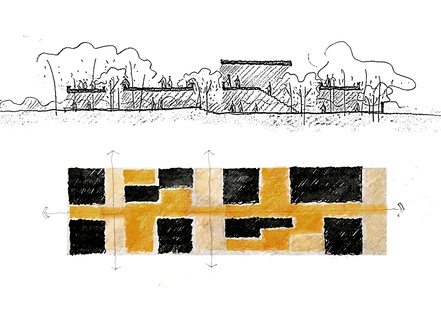 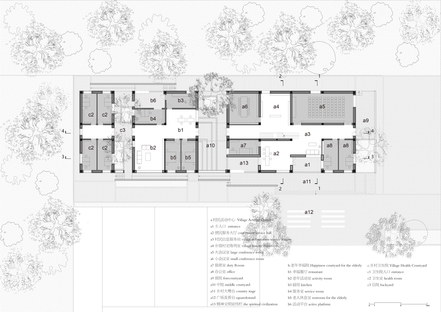 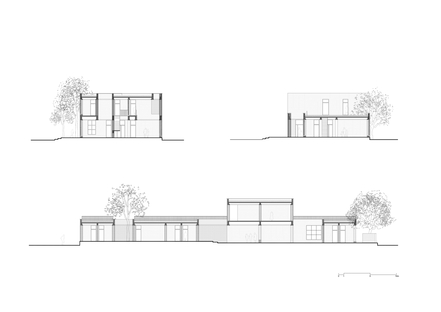 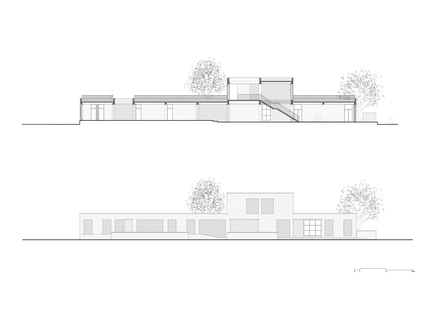 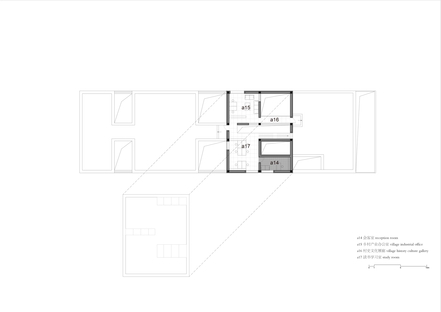 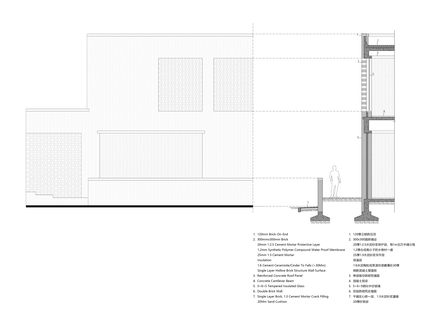