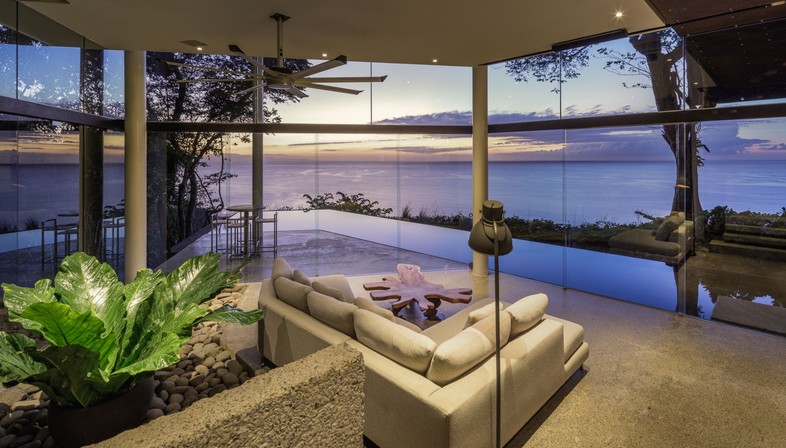 The Cocobolo house designed by Victor Cañas on Montezuma beach in Puntarenas, Costa Rica, is emblematic of cultural change in the area in recent decades. Known for its multi-ethnic character and uncontaminated vegetation, Montezuma used to be frequented primarily by nudists, hippies and artists from all over the world, who came to the beach to live a simple life in harmony with nature. The Cocobolo house is an expression of nature mediated by luxury and comfort, in which Victor Cañas and his studio interpret today’s new requirements. Their architecture reflects the new dialogue between humans and landscape in a project underlining the balance of power. The building attempts to minimise its impact on the earth with a basic structure: two concrete plates form the base and roof of the home, between which is an intangible volume consisting mainly of glass. When seen from above, the two slabs of concrete form a highly anthropized space in sharp contrast with the wilderness around it; what we see from a distance is the white roof extending out over the cliffs and the round pillars supporting it. The base, part of which is a black swimming pool, while part is bare concrete, covered with wood to form a patio, takes on the colours of the earth, as if attempting to disappear and blend into the earth.
The Cocobolo house, which, like many of the homes in Montezuma, is now rented out to tourists, stands on the edge of a 40 metre cliff forming the principal element the building relates to. Facing the Pacific Ocean, to the southwest, are the planes of the structure with their entirely transparent side walls, unlike the northwest side of the home, which is more compact, sheltered by concrete and steel.
The house is reached from the north, from a hill covered with Cocobolo trees, the tropical hardwood typically found in Central America which gives the project its name. The forest extends out to the cliff and along the canyon created by the Rio Montezuma; the home makes room for itself in the midst of the vegetation, without suppressing it, but allowing one of the tall Cocobolo trees to enter the construction.
Next to the building the architects designed a parking area, keeping the cars some distance away from the place where people and nature symbolically coexist. Big concrete steps imitating natural boulders lead down to the entrance to the home, marked by a rough concrete roof. The main door opens into a double-height foyer, separated from the living room by a wall to preserve the intimacy of the space and the privacy of the rest of the home. A solid wood staircase suspended over a garden of river gravel leads to the bedrooms on the upper level, while on the other side, rough concrete steps continue to the living room, extending out over the sea, bounded only by the frame of the glass doors. It extends out into a black overflow pool with a deeper swimming pool. A surprising mirror effect creates an illusion of continuity between the artificial pool and the ocean below it.
On a slightly higher level, the ground floor continues into the kitchen, which in turn communicates with a wooden patio and then an office, in a more private corner, with utility areas on the southwest side.
But the most surprising episode in the project may be found on the upper level: a Cor-ten walkway leading from the top of the stairs toward the void. Dividing the floor in two, with the same wooden flooring as the bedroom to the east, the steel bridge underlines the hierarchy between the master bedroom and the secondary spaces to the west. The architects describe this powerful straight line as a finger pointing toward the horizon. But this element also yields before the power of nature: rising higher than the roof, the Cocobolo tree cuts right through the bridge, which has an opening in its railing so that people crossing the bridge can touch it, and it feels like a part of the home. 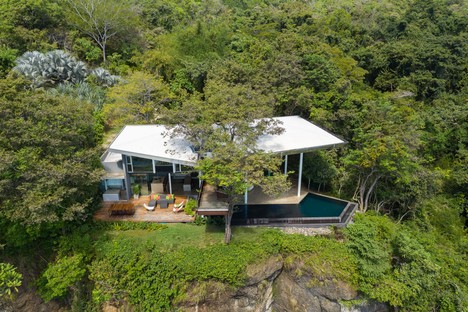 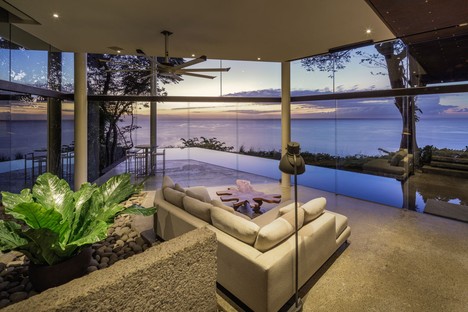 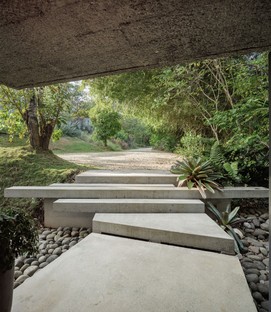 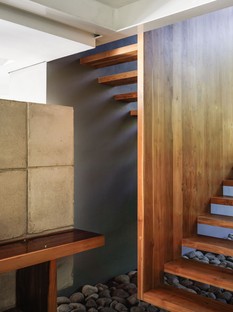 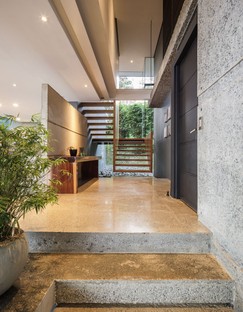 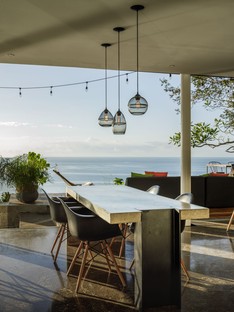 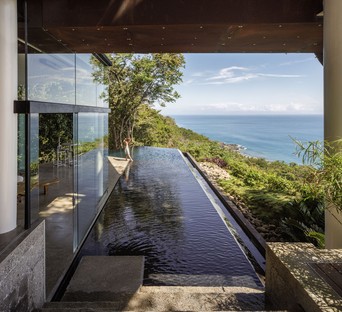 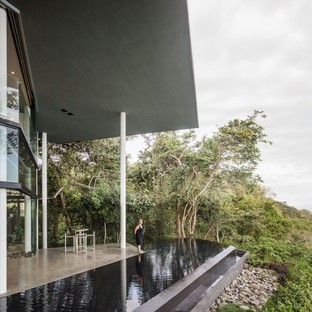 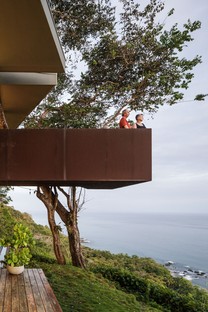 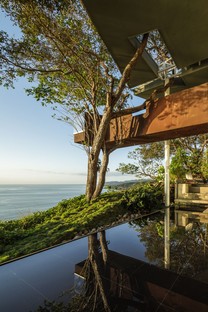 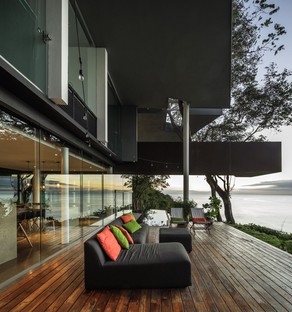 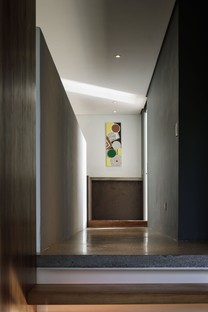 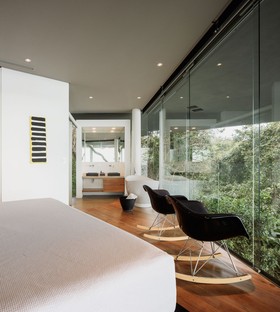 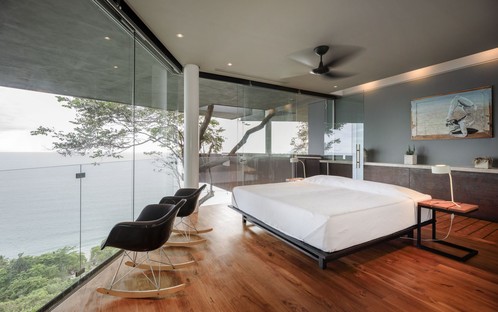 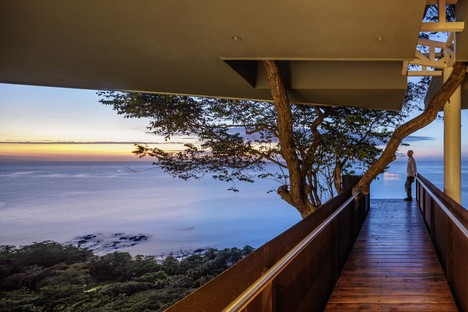 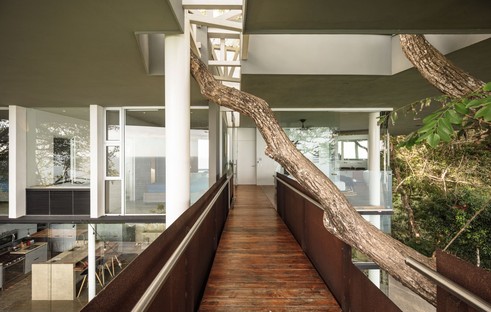 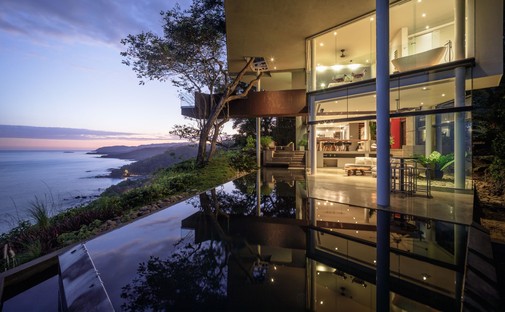 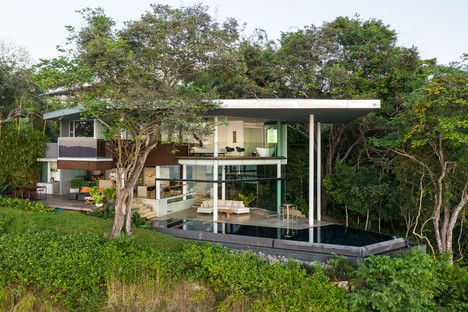 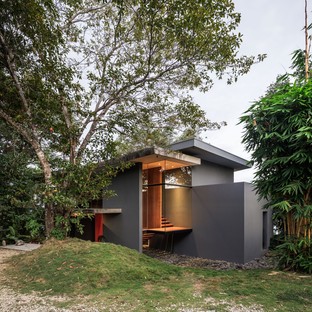 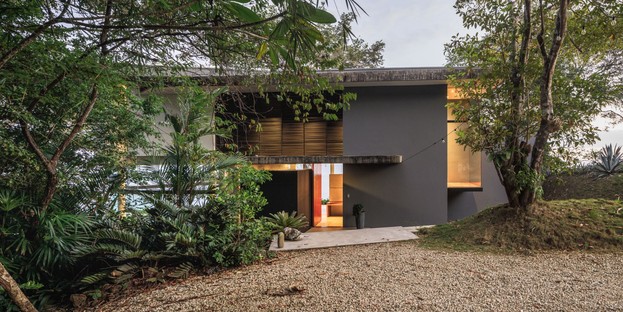 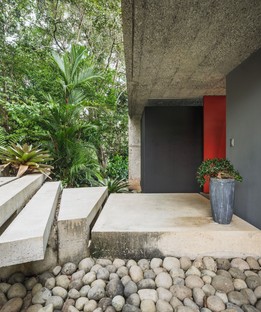 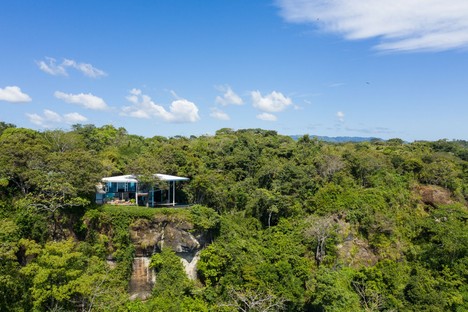 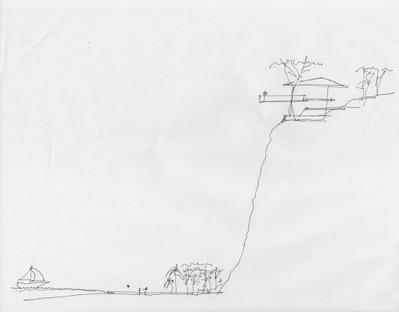 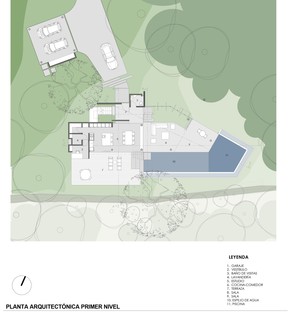 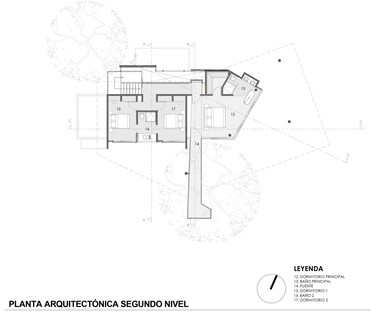 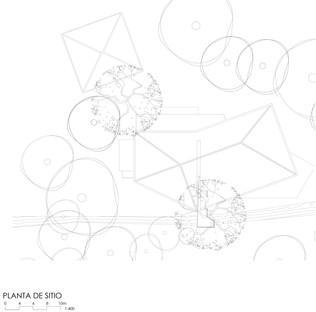