Vector Architects have designed a contemporary multilevel building in Bayuquan, China, an exhibition centre for the Vanke real estate group which becomes part of the city’s waterfront. The materials chosen for the building’s cladding underline a compositional solution in which the boundaries between inside and outside are blurred. 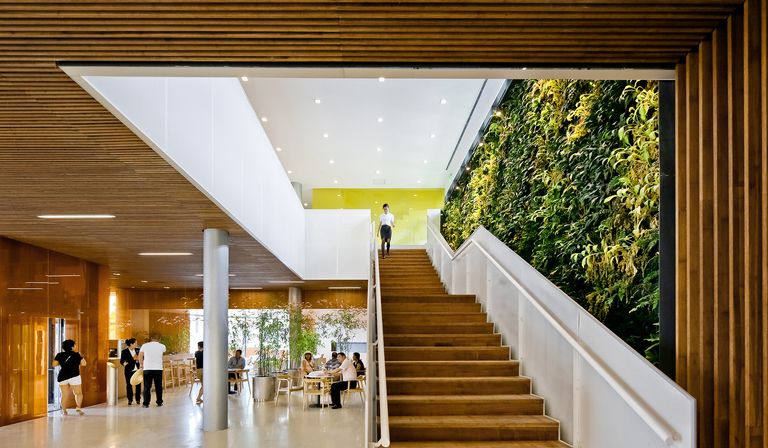 Vector Architects reflects on the potential of contemporary architecture, seeking to establish a dialogue with its surroundings in the city. In their plans for the Vanke Group exhibition centre in Bayuquan, China, the building’s functions are multiplied in relation to the landscape, becoming a landmark and a predominant urban element. Boundaries between inside and outside are eliminated in a hybrid form that attracts visitors and encourages users to make use of the space in creative ways. The resulting tower shape with four levels above ground is divided into closed spaces for exhibitions and conferences and open spaces on different levels, making entertainment into a cultural and contemplative experience.

The concept of the exhibition centre, like that of a museum or cultural centre, lends itself by definition to figurative interpretations, ensuring that the resulting image expresses their artistic content.
On a flat site without any visually prominent features on the Bayuquan waterfront, the project seeks above all to provide the city with a landmark, responding to the need for orientation and identification of the place.

The surrounding landscape, a flat area ending in the sea, completes the Vanke centre building, from which there are beautiful views of it. Its compact geometric volume is enlivened by openings created by the staircase as it winds toward the top, with a bamboo floor recalling the wooden colour of the laminate panels covering the entire building and allowing it to blend into its natural surroundings.

If we let our imaginations run wild, we might see a fairy-tale medieval tower in Vector Architects’s construction, observing the compositional inventiveness of the wooden pathway through the park and up to the viewpoint and terrace at the top. The external staircase is in fact independent of the building’s interior, but both come together on the terrace, where events and performances can be held that draw the audience’s attention to the building as an urban landmark.
The sea and the city may be observed from the two completely open walls to the north and south, while the curtain walls on the other sides draw the boundaries of the space. The aluminium panels to the east are completely perforated so that they shelter the terrace while offering discrete views of the building’s surroundings.

The architects use this pattern in the decoration of the minimalist space on the top floor, in which the path of the shadows gives visible form to the passage of time during the day. As the belvedere is accessible not only to visitors to the centre but to passers-by as well, via the outdoor staircase, the structure becomes an extension of the urban design of the waterfront. Winding around the Ginkgo Biloba trees in the park, the staircase offers users different points of view to make the most of the building’s surroundings. 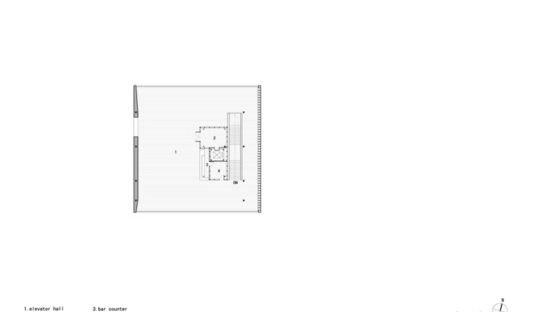 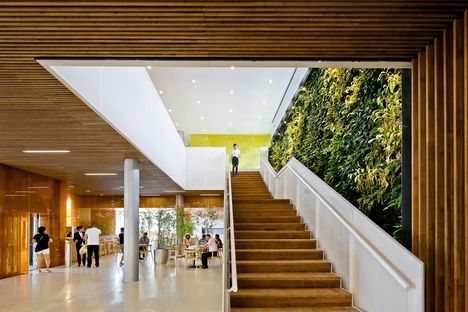 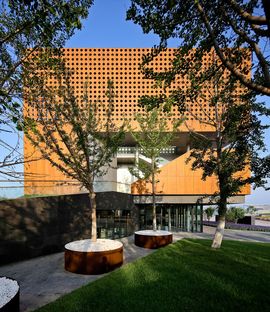 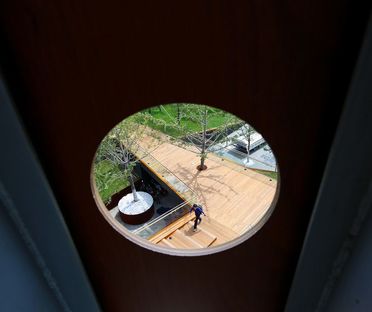 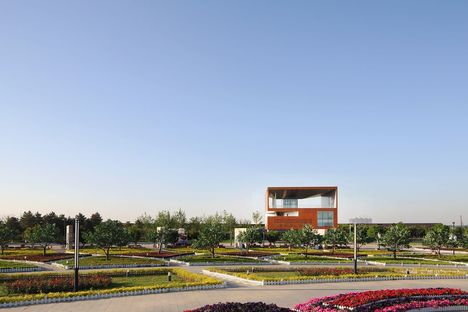 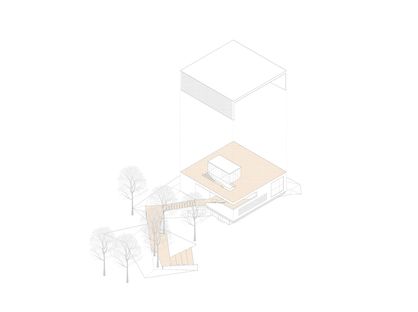 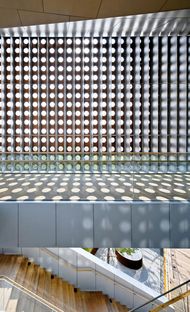 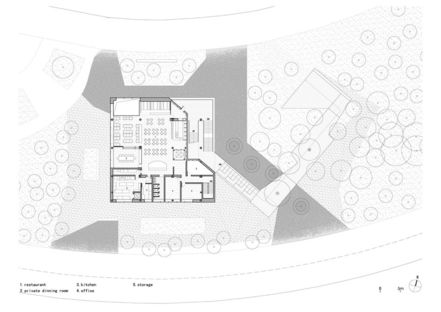 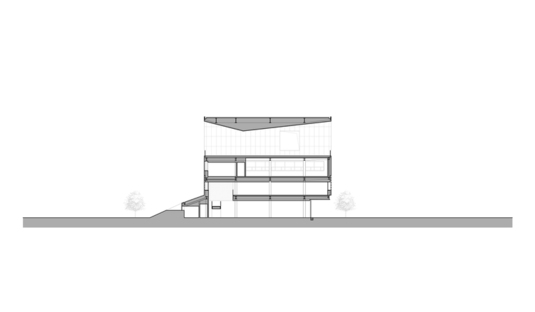 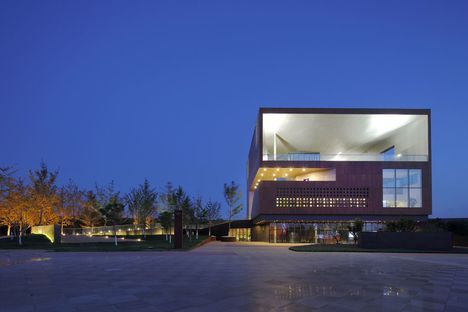 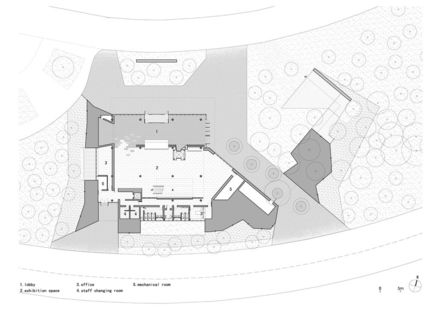 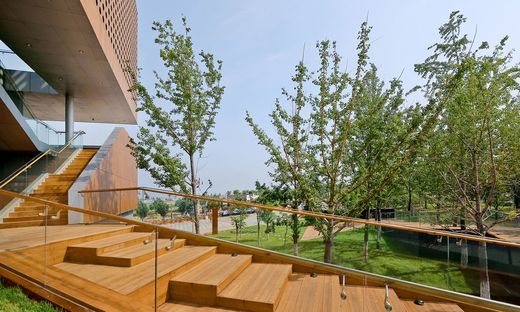 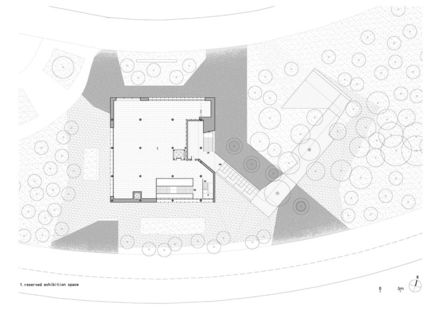 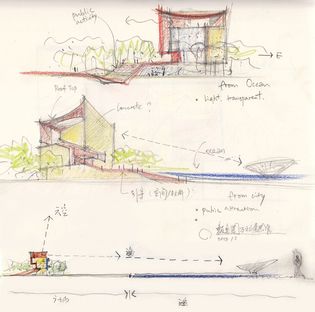 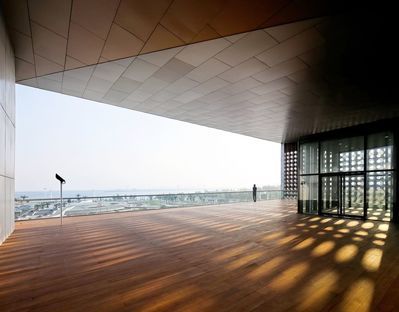 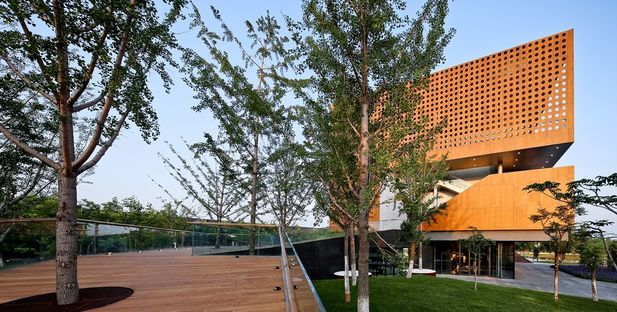 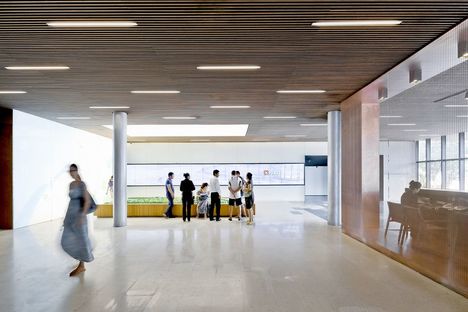