SOS Children's Villages commissioned Urko Sanchez’s studio in Kenya to build a new complex containing 15 homes for orphaned children in Djibouti. Urko Sanchez has designed a “medina” for children which makes use of traditional Arabian building techniques to respond to extreme weather conditions. 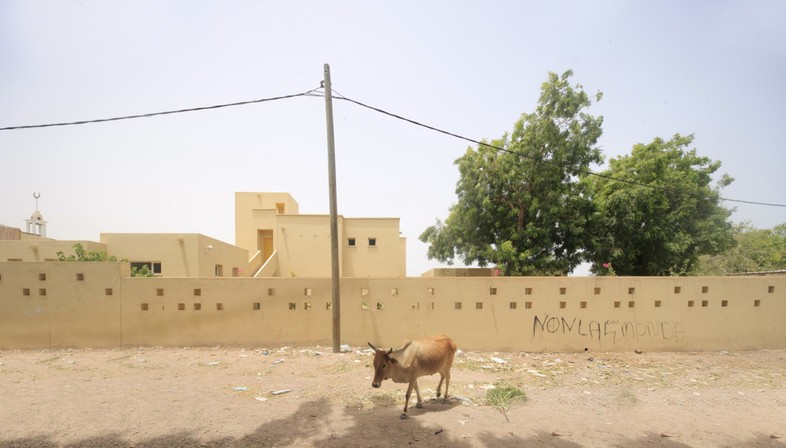 One of the countries where SOS Children's Villages works is Djibouti, in the Horn of Africa, with a village in Tadjourah, the country’s oldest city, capital of the district of the same name. In 2012 the NGO, which works all over the world to provide orphans with a permanent home and family, commissioned Urko Sanchez’s studio in Kenya to design a community of 15 homes in Tadjourah. The built project has now been shortlisted for the prestigious Aga Kahn Award.
The town of Tadjourah is known as the site that registers some of the hottest temperatures on earth over the course of the year, and this fact had a major impact on Sanchez’s design. Observation and study of local construction techniques was essential, particularly the passive ventilation systems traditionally adopted in places like this to combat the problems associated with the dry climate, taking advantage of the vicinity of the sea and the resulting air currents.
The 15 homes are designed as a little village within the city, with pedestrian lanes where children can wander about unaccompanied, as the general permeability of the houses allows adults to supervise them at all times. The centre looks like a sort of fortified village, a circumscribed, unitary place with buildings of various heights rising above its perimeter walls. The walls around it, which identify the space as a whole without appearing to discourage visitors, have small windows at regular intervals on all four sides, inspired by those of the windows within the complex, establishing a visual dialogue with the city around it. The concept of establishing a relationship between the children’s village and the city around it is one of the unique characteristics of SOS Children's Village’s projects, encouraging sharing of a number of social and medical services with the rest of the city.
On the other hand, the ochre walls around the Village identify a specific area with a precise identity for its residents, an area which has gained the respect of the community. The typological reference for the local population is clearly the Medina, the old quarter typical of Islamic cities, surrounded by walls, criss-crossed by numerous narrow alleyways, and containing a vast number of decorative elements such as fountains, gardens and monuments of value. The area is shut off to vehicle traffic, and the homes arranged within it form a sheltered microcosmos, facing one another and only rarely facing the world outside, to provide the occupants with a sense of privacy.
The intimacy of the houses, small in size and with certain well-defined angles of view, is combined with semi-public areas shared with other households, which people may access directly so that they become extensions of private homes. Each of these little open-air shared “squares” offers vegetation, furnishings to encourage people to stop and socialise outdoors, and playgrounds, places which are partially hidden in the tangle of pathways Sanchez has created in the village, but necessary to allow the inhabitants to get from one place to another, passing by private spaces and thereby encouraging the formation of relationships. The architect explains that the “square” plays a key role for nomadic peoples whose very identity demands a strong relationship with open space.
The architect continues by illustrating his approach to a project designed in a place where, “ as in many other places in Africa, there is a lack of regulation of constructions, which often leaves developers the freedom to build low quality, short-term rentable architectures, often leaving sustainability behind. For us, this freedom comes with great responsibility, and it was the ideal context to design a high quality, low budget compound.”
The urban planning principle underlying the medina, which makes use of the air currents that form in the lanes and the shade created by the orientation of the buildings, was a major source of inspiration. Sanchez studied the optimal arrangement and height of groups of buildings, the design of the pathways and the size of the windows and doors in the homes with the goal of creating passive ventilation corridors. “Wind catcher towers” are incorporated at critical points in the project to capture cool air and convey it to the lower levels, maintaining a flow of refreshing air throughout the interior spaces.
The minute urban fabric with construction of adjacent and even overlapping homes ensures that roofs become terraces and provide the shade so important in this climate. The alternation of different heights and layouts revealed by the façades and sections of the buildings mitigates the constructions’ impact on their surroundings. The overall permeability of the complex is reinforced in the interiors by the absence of doors in the openings and by use of the traditional mashrabiya, the latticework historically used in Arabic homes to provide ventilation as well as privacy. This also has an educational purpose, making it easy for the SOS mothers to watch the children, so that the children can enjoy free play in perfect safety.
Use of prefabricated concrete blocks was practically obligatory to cut costs, and photovoltaic panels were installed to make use of the strong sunshine to make the complex energy self-sufficient. The earthy-coloured finish on all the walls reinforces the complex’s links with the landscape, blending into it. Despite the area’s low rainfall, plants have been introduced in the project to encourage residents to take care of this natural element which brings well-being and helps cool down the spaces.
The children’s positive response has been shared by the people of Tajourah, who helped out with the construction of the village and have since continued to frequent the complex and help integrate it into the fabric of the community. 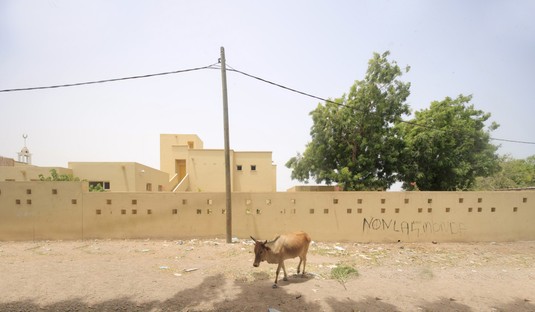 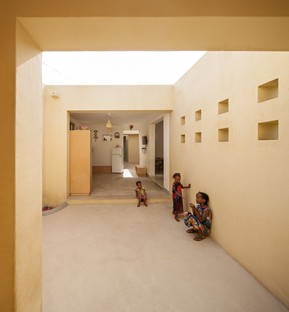 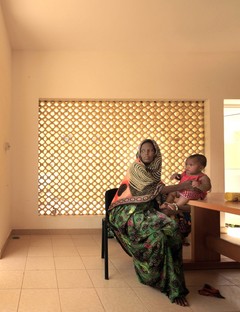 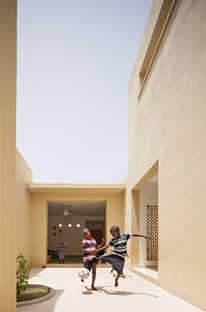 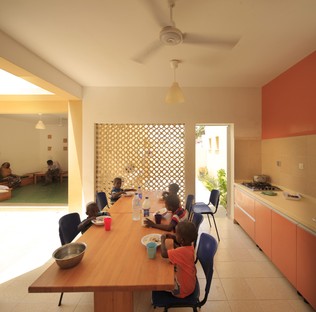 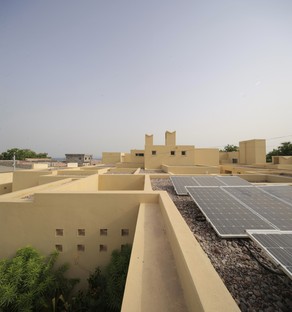 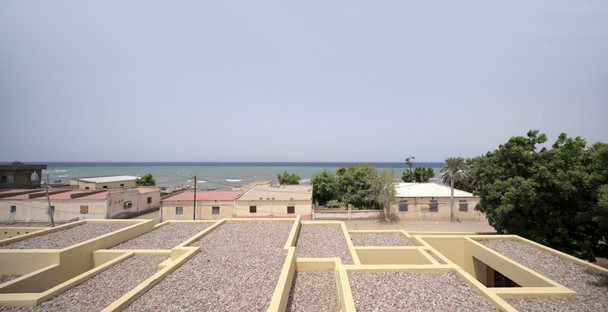 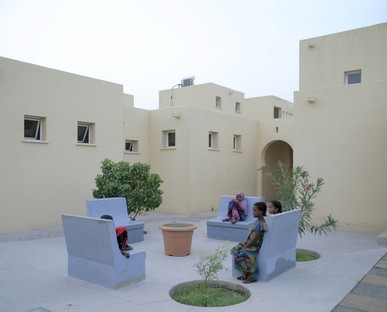 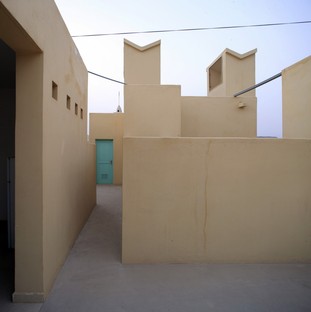 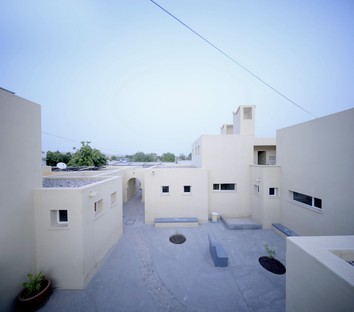 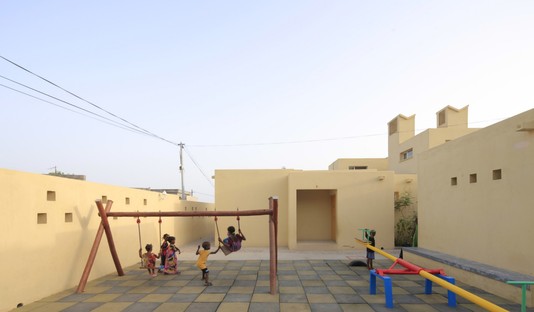 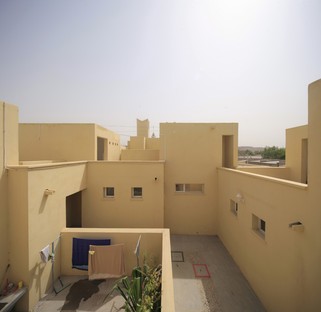 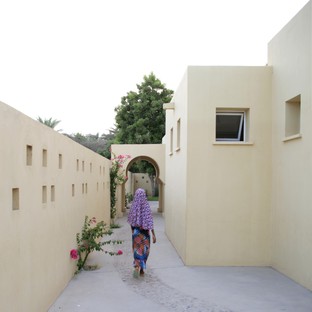 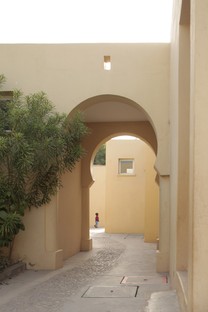 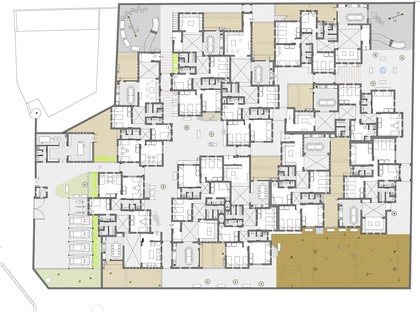 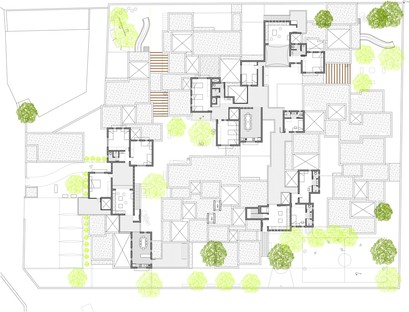 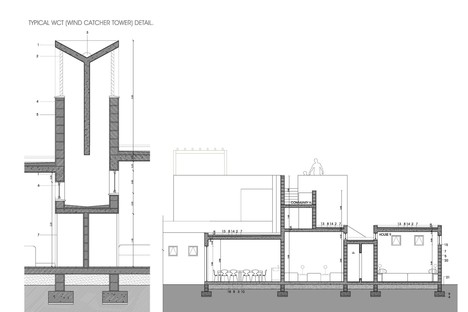 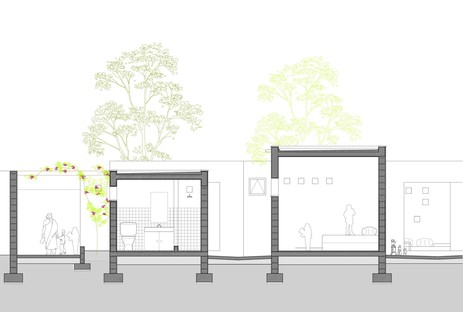