The twenty-sixth Architects Series will focus on international architecture studio Snøhetta. Scheduled for Thursday, November 10, the webinar will include the screening of a video followed by a lecture on the studio’s design approach delivered by co-founder Kjetil Trædal Thorsen. Beginning at 6:30 pm (CET) / 5:30 pm (UK GMT) / 12:30 pm (US EST), the webinar will stream live from the Iris Ceramica Group’s Milan flagship store. Register for the event on the Iris Ceramica Group website.
The Architects Series – A documentary on: Snøhetta is the 26th instalment of this online event organized by THE PLAN magazine for Iris Ceramica Group. The webinar will take place on Thursday, November 10, from 6:30 pm (CET) / 5:30 pm (UK GMT) / 12:30 pm (US EST) and will include the screening of a 30-minute video documentary followed by a lecture by studio co-founder Kjetil Trædal Thorsen. Participants will need to register on the Iris Ceramica Group website. The webinar will be streamed live from the Iris Ceramica Group’s flagship store in Milan.
For over 30 years, Snøhetta has been designing some of the most important public and cultural buildings in the world. The studio began life in 1989 with the winning design in the competition for a new library in Alexandria, Egypt. This project was followed by many others, including a commission for the Norwegian National Opera and Ballet in Oslo, and the National September 11 Memorial Museum Pavilion at the World Trade Center in New York.
The studio has remained true to its original interdisciplinary approach, integrating architectural, landscape, interior, product, graphic, and digital design as well as art across its projects.
The firm has offices in Oslo, Paris, Innsbruck, Adelaide, Hong Kong, New York, and San Francisco. Snøhetta is currently working on a broad range of international projects, including 550 Madison Garden and Revitalization in New York, the Theodore Roosevelt Presidential Library in North Dakota, the Shanghai Grand Opera House, Beijing Sub-Center Library, Esbjerg Maritime Center in Denmark, and the Stegasteiner in Brønnøysund for Norwegian Scenic Routes. The studio’s recently completed projects include the expansion of the Ordrupgaard Art Museum in Denmark; the Executive Education Center and the Cornell University hotel in New York; the headquarters of Le Monde Group in Paris; Under, the first underwater restaurant in Europe; the Times Square reconstruction; the expansion of the Museum of Modern Art in San Francisco; Lascaux IV: the International Center for Rock Art; Powerhouse Brattørkaia; and the design of Norway’s new banknotes.
Snøhetta’s working method simultaneously explores traditional handicrafts and cutting-edge digital technology. At the heart of all the practice’s work is its commitment to social and environmental sustainability so as to shape the built environment and products for the benefit of humanity.
Among a string of awards, Snøhetta has received the European Union Prize for Contemporary Architecture – Mies van der Rohe Prize for the Norwegian National Opera and Ballet, and the Aga Kahn Award for Architecture for Bibliotheca Alexandrina. In 2016, Snøhetta was named WSJ Magazine Architecture Innovator of the Year by the Wall Street Journal. For two consecutive years, the firm was named one of the most innovative companies in the world by Fast Company. In 2020, the studio was the recipient of the National Design Award for Architecture by Cooper Hewitt, Smithsonian Design Museum.
During the event, Kjetil Trædal Thorsen will present a lecture entitled “Continuous state of reinvention”
Kjetil Trædal Thorsen, co-founder of architecture and design practice Snøhetta, will take the audience on a journey through Snøhetta’s over 30-year-old history and philosophy, giving insight into its most defining projects
---> To participate in the webinar The Architects Series – A documentary on: Snøhetta, register via the following link.
The course has been submitted for approval by AIA CES (USA) and RIBA CPD (UK) for continuing education credits, and by CNACPP for accreditation of two CFPs (Italy only).
WEBINAR:
Thursday, November 10, 2022
6:30 pm (CET) / 5:30 pm (UK GMT) / 12:30 pm (US EST) - Welcome and screening of The Architects Series – A documentary on: Snøhetta.
07:00 p.m (CET) . Lecture / Conference presented by Kjetil Trædal Thorsen
Kjetil Trædal Thorsen
Kjetil Trædal Thorsen co-founded Snøhetta in 1989 as a collaborative architectural and landscape workshop with its values rooted in the Brundtland Commission’s 1987 World Commission on Environment and Development report on sustainability, Our Common Future. Today Snøhetta is an interdisciplinary studio involved in architecture, landscape architecture, interior architecture, art, product design, graphic design, and digital design, with projects often involving input from diverse fields.
Since the firm was established, Kjetil Trædal Thorsen has contributed to numerous projects, such as the Bibliotheca Alexandrina in Alexandria; the Norwegian National Opera and Ballet in Oslo; the SFMOMA in San Francisco; the headquarters of Le Monde Group in Paris; Europe’s first underwater restaurant, Under, in Lindesnes; and the Powerhouse Brattørkaia in Trondheim.
His work has been recognized with numerous awards, including the European Union Prize for Contemporary Architecture – Mies van der Rohe Prize, the Aga Khan Prize for Architecture, and the Global Award for Sustainable Architecture.
Kjetil Trædal Thorsen often lectures and speaks at conferences. Between 2004 and 2008, he was a professor of architecture at the Institute of Experimental Architecture at the University of Innsbruck, Austria. He is a frequent jury member of international design and architecture competitions and awards, such as the 2021 Obel Award and the 2022 Zumtobel Group Award. 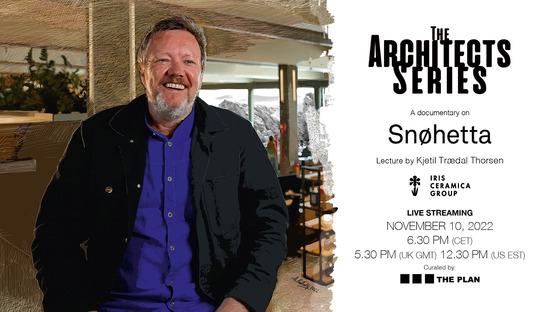