The Architects Series – A documentary on: HawkinsBrown

On Thursday 18 November, the twentieth episode of The Architects Series will host the architecture firm HawkinsBrown, with the screening of a video and subsequent lecture held by the founders Roger Hawkins and Russell Brown. Starting at 18.30, the webinar will be streamed live from the Iris Ceramica Group showroom in London, with the participation of the other company Flagship Stores in Milan and Berlin. Interested users can follow the event by registering on the Iris Ceramica Group digital platform.
"The Architects Series: A Documentary on HawkinsBrown” is the twentieth appointment of the webinar series promoted by Iris Ceramica Group and organised by the magazine THE PLAN, devoted to the stars of contemporary architecture. On Thursday 18 November, from 18:30, registering on the Iris Ceramica Group digital platform, you can watch the video-documentary lasting 30 minutes and the following lecture held by Roger Hawkins and Russell Brown, founders of the firm HawkinsBrown.
The event will be streamed live from the prestigious Flagship Store in London in the presence of a group of selected guests and with the involvement of the other company Stores in Milan. The elegant London showroom, located in the heart of the creative Clerkenwell district in Old Street (61-67), will set the scene for the event, during which the firm HawkinsBrown will use videos, images and words to describe their approach to the design world.
Founded in London in 1988 by Roger Hawkins and Russell Brown, the architecture firm HawkinsBrown has made its name on the national and international scene due to its ability to complete projects blending in-depth technical expertise and the understanding of the cultural and social context of the surrounding environment. With branches in Manchester, Edinburgh, Dublin and Los Angeles, the firm works on a wide range of projects, in the residential, educational, civil, cultural and health sectors, as well as infrastructure and transport.
In the infrastructure and transport sectors, HawkinsBrown was appointed by Crossrail Limited (Transport of London) to design three of the ten stations - Tottenham Court Road, Bond Street and Liverpool Street - on the new London railway, the Elizabeth Line. Responding to the needs of such a huge and complex project, the firm developed efficient solutions integrating the infrastructures into the community, improving the work of the railway staff and the passenger experience.
In the health field, HawkinsBrown developed the masterplan for the renovation of Eastman Dental Hospital, which will become the world’s most complete and coordinated neuroscience research centre. The building was designed using principles fostering cooperation and research, as well as the adaptability and modularity of the spaces.
In 2018, HawkinsBrown completed ‘Here East’, a major redevelopment project to turn the former Press and Broadcast Centre built for the 2012 London Olympics into a new district housing an auditorium and commercial spaces for creative and digital businesses in London. At the Queen Elizabeth Olympic Park, born from a large steel cage built to house the equipment and machinery required for the event is The Gantry, a small vertical village with twenty-one new coloured elements with the archetypal shape of a house hosting emerging businesses.
Over the years, the firm has won numerous prizes and awards, including the Architects' Journal (AJ) Practice of the Year and the AJ Employer of the Year, and was also selected for the RIBA Stirling Prize.
To take part in the webinar “The Architects Series – A documentary on: HawkinsBrown” you must register at the following link
Participating architects can obtain 2 professional training credits.
WEBINAR:
Thursday 18 November 2021
18:30 / Welcome and screening of the video-documentary “The Architects Series – A documentary on: HawkinsBrown”
19.00 Conference with Roger Hawkins and Russell Brown 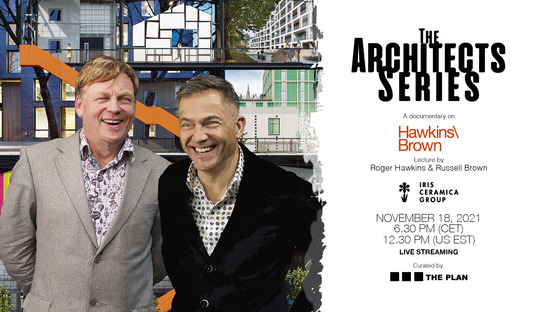