The Architects Series - A documentary on: GCA Architects

SpazioFMG per l’Architettura continues the series dedicated to the most innovative contemporary architecture practices of the moment. The next appointment with The Architects Series will be on Thursday 12 December at 6.30 pm, for the presentation of the documentary on GCA Architects.

The Barcelona firm GCA Architects will be showcased in the upcoming documentary in The Architects Series, the format curated by the The Plan magazine and featuring renowned Italian and international architecture practices at SpazioFMG per l’Architettura. The vernissage, which takes place on Thursday 12 December at 6.30 pm at Via Bergognone 27 in Milan, will present a screening of the “The Architects Series - A documentary on: GCA Architects” followed by a lecture by Josep Juanpere (founding partner), Andrea Navarro and Juan Velasco (associates) entitled “An insight into GCA architecture” at 7 pm.

Established in 1986 by Josep Juanpere and Antonio Puig, and subsequently joined by other partners, GCA Architects has a staff of over 90 professionals specialised in architecture and interior design. Characterised by a simple and minimalist design style, the studio has designed important projects in the hospitality and retail sectors, as well as corporate headquarters, residential buildings, and Michelin-starred restaurants.

Their approach to architecture is holistic and multidisciplinary, and combines artisanal elements with particular attention to technology and the environment, as evidenced by the design of the Platinum Building BCN 22@ awarded by LEED as the most sustainable workspace in the world.

Each project is approached with the commitment to create solutions that are tailored to the needs of the users and the sites, thanks to a multidisciplinary team that combines the experience of the senior partners with the freshness and innovation brought in by the new generations. A mix of skills that has led to renowned European and International projects such as the Hotel Arts (Barcelona), the Eurostar Madrid Tower Hotel (Madrid), the Pronovias offices and boutiques (Barcelona, ​​London, New York), the head offices of the Cuatrecasas law firm (Madrid, Barcelona, ​​Brussels, Lisbon, New York), MANGO design and logistics centres (Barcelona), The Hotel (Brussels), the Boho Prague Hotel (Prague), and the Puig Headquarters Office Tower (Barcelona). Projects under construction include The Student Hotel Barcelona, ​​a five-star hotel in Dubai, two luxury hotel rehabilitations in Budapest, the Downtown Hotel Kelowna (Canada), the Six Senses Hotel in Ibiza, the Hotel & Villas in Morocco, and a hotel in Oporto.

The practice and a number of their projects will be the focus of The Architects Series - A documentary on: GCA Architects, which will highlight the studio’s ability to design spaces that can be easily remodelled and to create works capable of adapting to changes in society and its needs.

Architects attending for the entire duration of the conference will be able to claim 2 CPD credits.

From 23 January to 14 February, every Thursday and Friday, from 4 pm to 7 pm by appointment only. 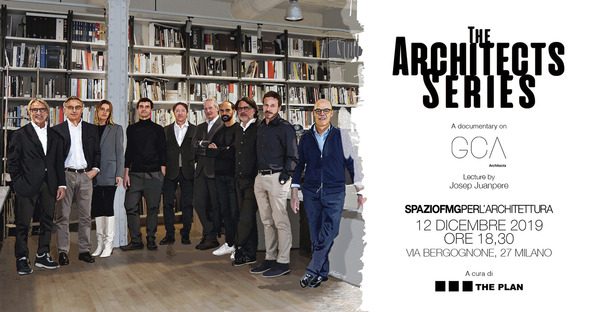