A surprising solution has been designed by Kobe-based firm Tato Architects for a new single-family home in Takatsuki, a city in the Osaka Prefecture. Two spiral paths that meet at various points offer an interesting range of variable routes through the house. 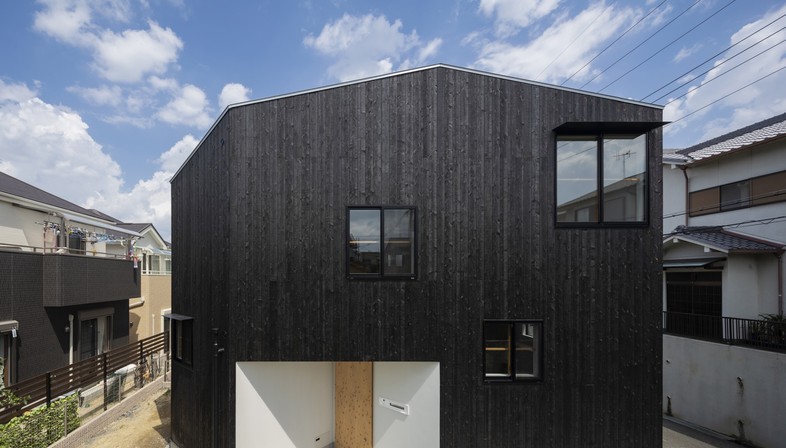 Once again, we find ourselves examining the work of Yo Shimada, founder of Tato Architects in Kobe, a firm mainly engaged in residential projects in Japan, such as the interesting house in Sonobe, Kyoto Prefecture, posted by Floornature some time ago. The house, which has been dubbed a “functional cave”, is located in Takatsuki, a city in the Osaka Prefecture, and stands on a small lot of a little over a hundred square metres in a suburban residential neighbourhood. The area is on a slope and has terraces which make the land irregular, offering a certain amount of variety between the heights of the houses. However, the scale is still small, matching that of the surrounding two-storey houses, and this provided the basis for the design of the functional cave.
The idea of the cave-house - or rather, the retreat for the family - has been a popular theme explored extensively by Japanese architects in recent years. Privacy is one of the issues related to living spaces, made increasingly urgent by the rising cost of land leading to homes being built at minimal distances from one another so as to make use of every last square metre available. As such, Japanese architecture has, for some years now, responded to this challenge with an introspective rethinking of the concept, minimising or indeed removing any dialogue with the outside world.
The research proposed by Yo Shimada in this case does not entirely cut out a view of the neighbourhood, but it does strongly push the living experience in a hermetic - perhaps even forcibly intimate - direction. As the starting point for the project is the challenge of balancing the small area available with the desire to maintain a scale suitable for the context, thus ruling out any towering constructions, Tato Architects’ focus was on how to make the most of the horizontal space. The house in Takatsuki features a continuous floor layout that spreads across a series of terraced interior floors. The wooden structure contains two spiral paths, connected at the entrance at ground level and on the terrace roof, in which the rooms are divided not by complete walls and ceilings, but rather by portions of intermediate floors. Instead of creating distinct spatial and functional separations, the interior is treated as a dual path of interpenetrating places. According to Yo Shimada’s thinking, the idea was to create a sense of expansiveness inside a small house - in other words, for the space to be perceived as much larger than it actually is in objective terms.
As a result, this structure - which stands at a height of just two floors - actually holds an incredible 16 different levels which extend in various directions, resulting in an interior which is similar to a cave tailor-made for the living requirements of its inhabitants.
This concept was first tested by Tato Architects when designing a house in Miyamoto. On that occasion, the vertical spaces between the different steel levels had been left open, creating a ‘floating space’ effect and structuring a sort of single room made up of many interrelated parts. In the Takatsuki home, however, the choice of wood as the structural material - for budgetary reasons - led to the adoption of vertical infill panels. This was done so that the available volume would not be perceived as a single unit, but rather as a path guiding the inhabitants through terraced floors placed at height differences of around 70cm, where the gap between each one is a wall, used as a barrier to create intimacy and sometimes used as a support. The floors then become tables on which to work, eat or play.
The rectangular floor plan is ordered according to a 45° diagonal grid, previously used by Yo Shimada in the house in Sonobe with the aim of increasing the level of interpenetration between the various rooms.
In keeping with this order, the house flows upwards, following two spiral paths that stem from the entrance, crossing over in the living space, which features a kitchen and dining room. Here, in the ideal centre of the house, the paths split once again before finally being reunited on the roof.
In a project designed with a view to making the space as open and shared as possible in order to functionally expand it, the boundary between semi-public and private has been carefully defined. Maintaining privacy and intimacy has been managed by designing bedrooms which do not communicate with other rooms on the ground floor. All the other spaces, meanwhile, are both rooms with specific functions and passageways through the house: the children’s play area, the lounge and dining room, the study, the roof terrace and even the bathroom (which is a shared space in Japanese culture) are transitional spaces where activities intertwine, with one always involving another. This philosophy of life is particularly well expressed in the perspectives created by the space, where each room ends and continues into the next, whether it is moving upwards or downwards.
As for the colour palette used here, there is a strong contrast between the wood flooring and the white plaster of the walls. The “cave” is made into a welcoming home with a multitude of inventions and details in the décor, such as the three-petal metal lamp on the dining table, the hatch on the wall at the entrance, which opens directly onto the postbox, the sink and dressing table ensconced in a small brass-clad alcove, and an assortment of other tiny hidden cupboards dotted around. The children’s room itself is designed as a wooden tunnel or secret slide which they can use to go from one part of the house to another without being seen. 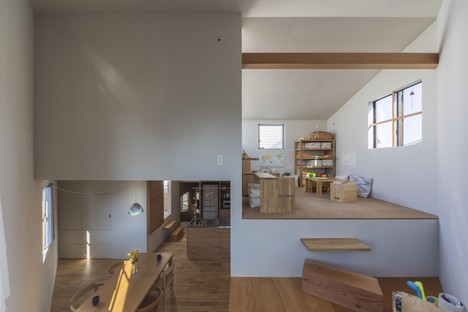 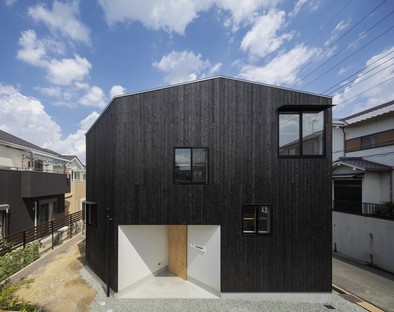 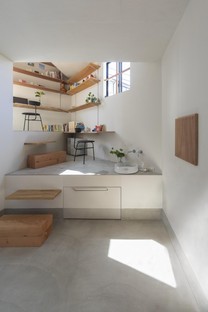 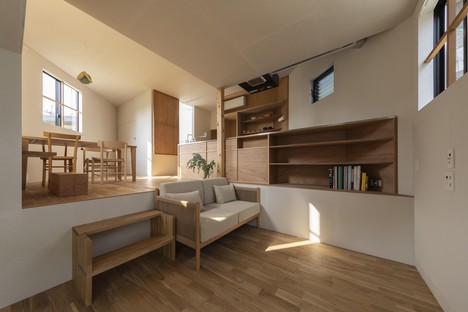 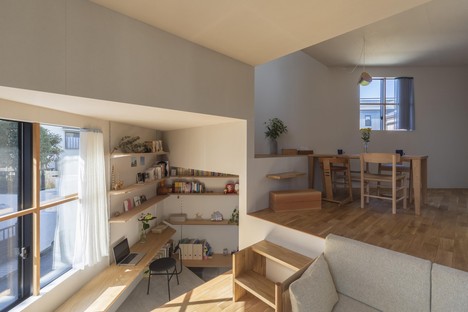 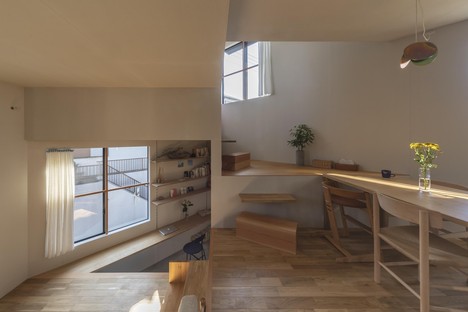 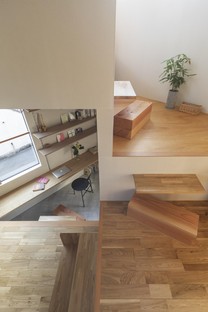 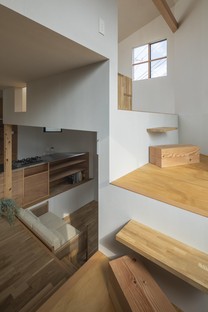 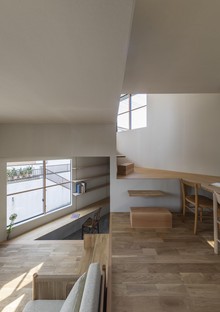 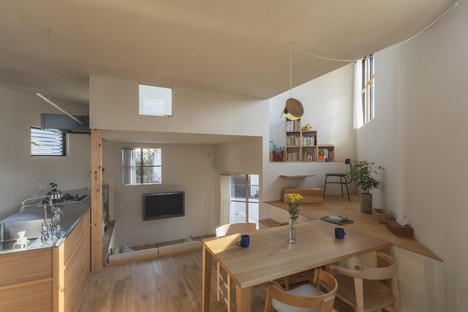 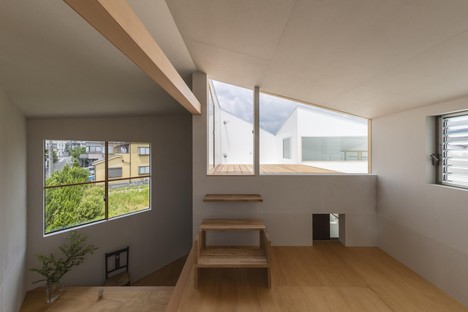 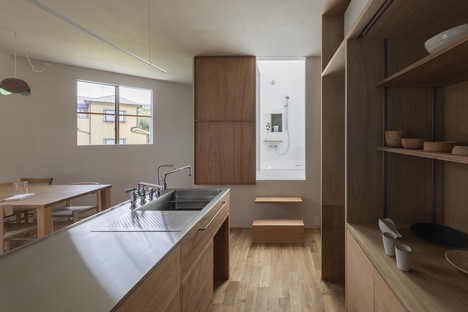 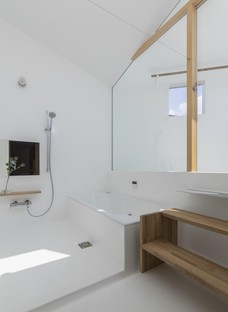 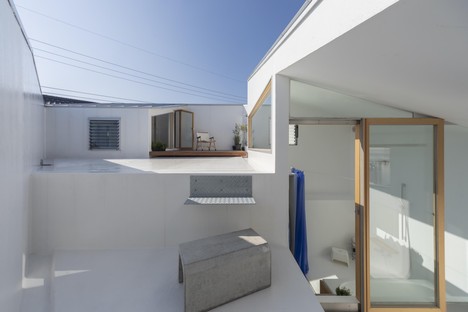 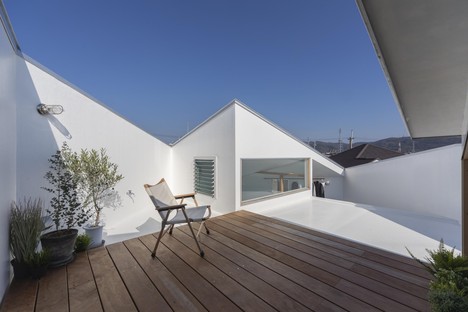 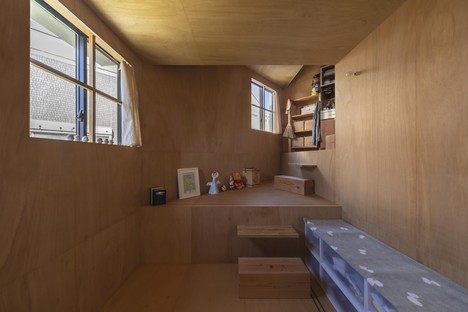 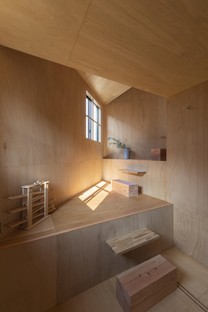 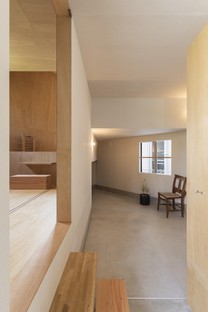 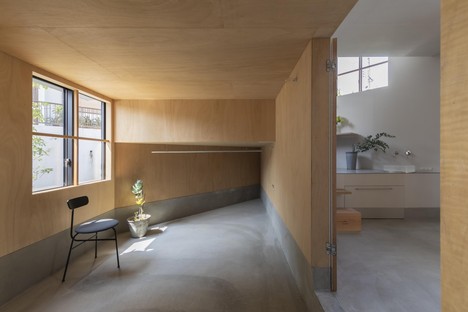 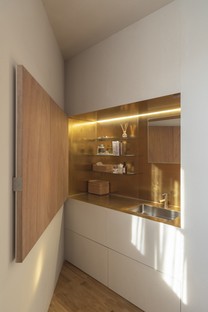 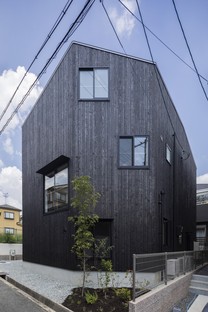 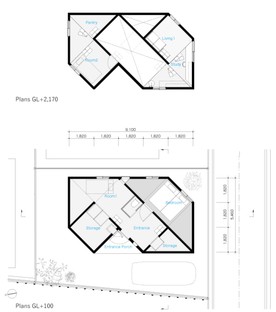 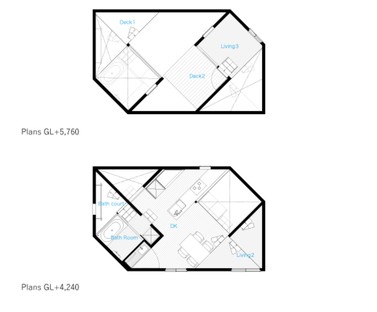 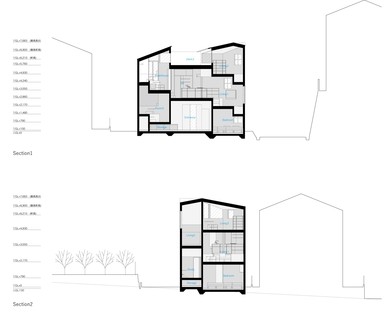