Tato Architects / Yo Shimada has designed the Blend Inn, a small hotel in Osaka. Its raw cement skeleton can be used as the basis for any design. Furnished with colourful interiors, the Blend Inn by Tato Architects aims to encourage people to rediscover the neighbourhood. 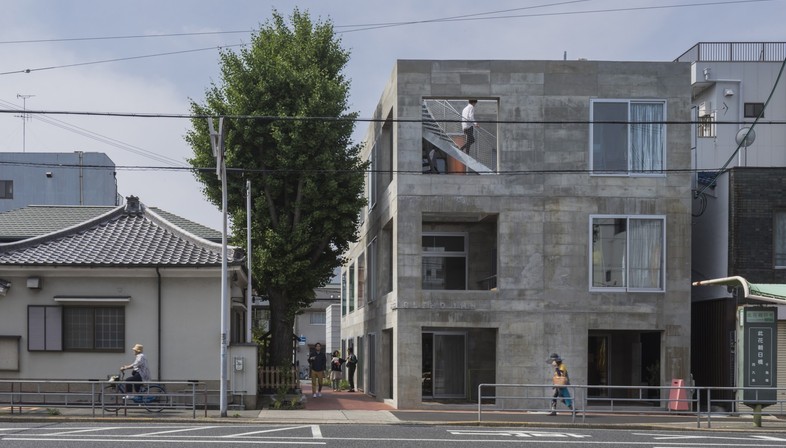 Yo Shimada’s firm, Tato Architects, helped to design a new building intended from the outset to be a tool for promoting the neighbourhood it would be located in. We are near Nishikujo Station, one of the stations on the circular line in Osaka, Japan, an area often frequented by artists and in which many of them have decided to set up their workshops. The disorderly atmosphere of this neighbourhood has stimulated the idea of a freer and less mainstream lifestyle, a tone set largely by the architecture. And it was from an artist and a construction company whom he decided to involve that the project was born - the project of creating a new hotel which would fully inherit and exemplify the philosophy of the neighbourhood, becoming its standard-bearer.
The financial problems that arose were resolved by the arrival of a real estate company, which bought the property with the agreement to rent the interiors of the new complex to the company. And that is exactly what happened. However, as there was no precise and definitive use established for the long term, Tato Architects’ design was developed according to a principle of flexibility of use which affected the structure first and foremost. The choice is based on a reinforced concrete skeleton, a box made up of 3.2m-sided cubic modules, spread over 3 levels with a flat roof, in which large square windows have been set. The regular scansion of the façades and the resulting formal banality make this architectural object very visible in its neighbourhood, without immediately marking it out as a hotel.
Left entirely exposed, the hollow concrete block alludes to the image of open construction sites, temporary structures, as well as abandoned and occupied buildings. This hospitality operation aims to echo the culture of street life, urban performances, impromptu installations. The presence of different-coloured curtains in every window is, from a distance, the only clue to any kind of internal coordination. However, upon closer inspection, the idea of being faced with some sort of shared residence takes shape thanks to the presence of external paving in water-permeable bricks which surrounds the building on three sides, invading the private road to the east until it skirts the hotel’s dependance building. The concept of sharing the public-private space, as announced by permeable façades with a strong visual impact like those at the Blend Inn, is confirmed by a private street which, with this complete overhaul of the flooring, is opened up to public passage.
The crossing of a perceptual boundary between private and public also involves the first space for access to the hotel on the north side, which adopts the same brick surface, in a sort of porch which acts as a filter between the street and the entrance proper.
Inside, beyond the reception area, the ground floor has a large hall suitable for enjoying a meal or simply chatting. Overlooking the street to the east with four windows is the heart of the hotel, a double-height space which links the reception floor with the first floor, containing the rooms. The service areas, such as the kitchens, have been placed on the opposite side, and are free to use for the guests, along with the block of bathrooms which continues up to the second floor and the stairs. Overlooking the ground floor, the hallway on the first floor offers the rooms a long, narrow bar-style table as a place to share. The rooms are all square, except the ones which combine two modules to accommodate more than two people. A module on the second floor houses an external metal cantilever staircase over the entrance, which leads to the terrace.
The furnishings are an integral part of the design and subscribe to the same philosophy that aims to establish a link between the new building and the experience of the neighbourhood. Created with recovered materials or by recycling and adapting pieces of disused furniture, they were made by local artists and associations. 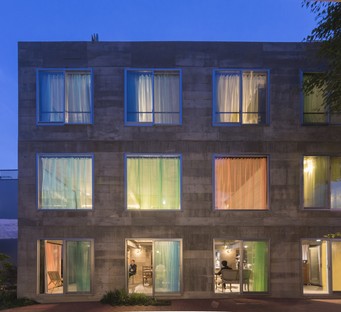 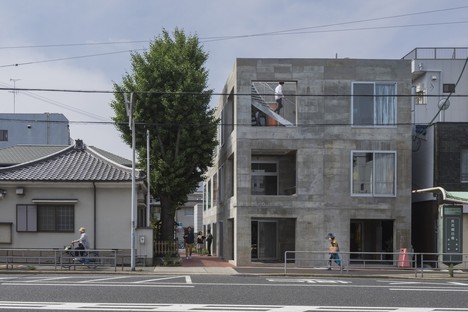 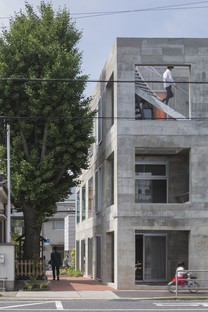 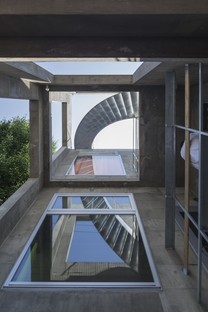 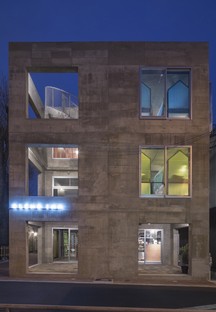 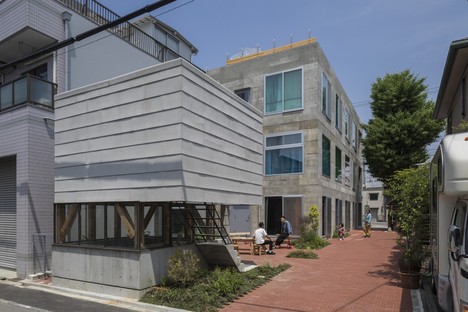 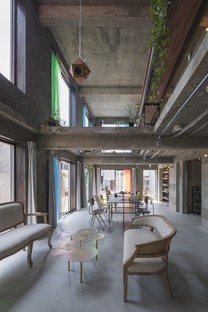 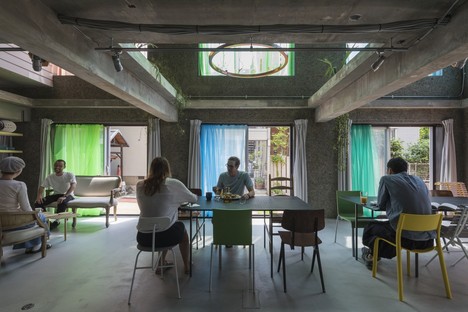 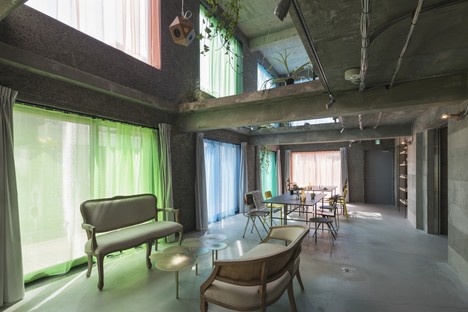 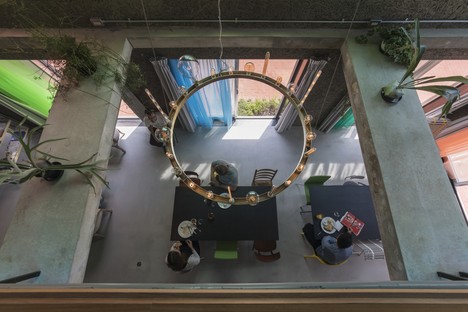 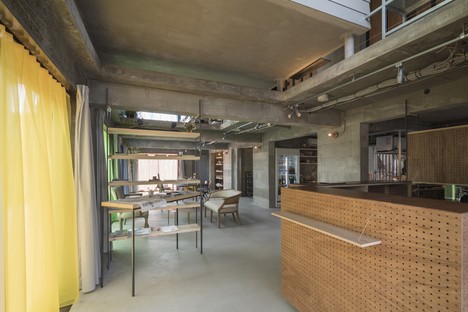 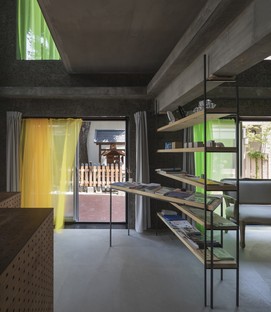 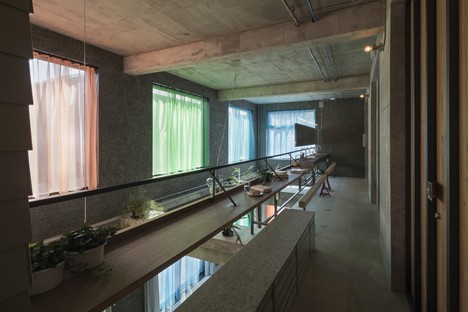 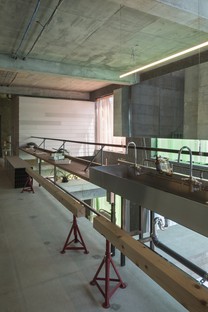 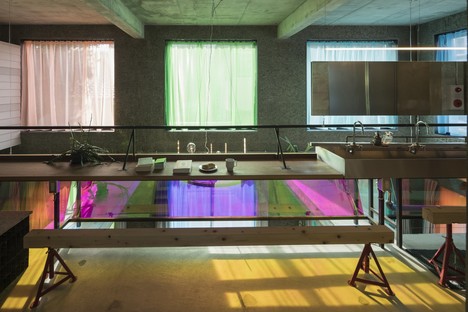 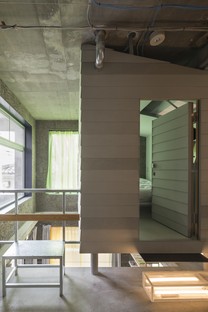 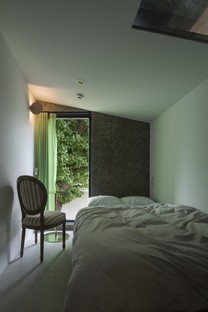 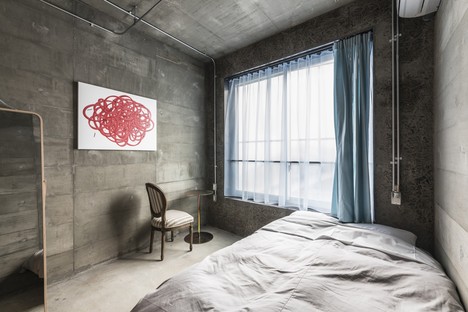 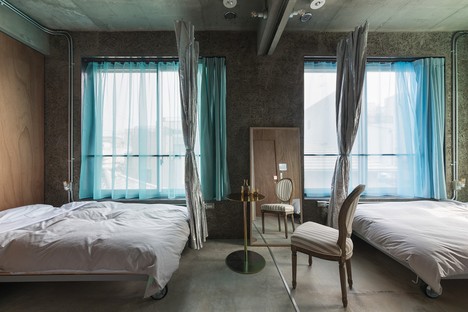 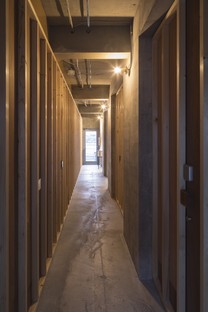 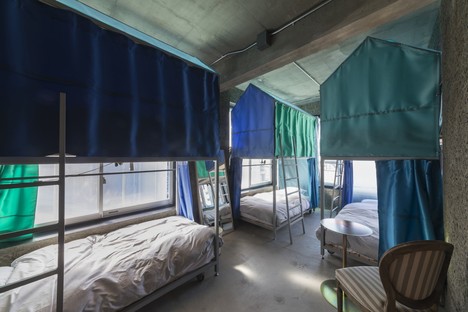 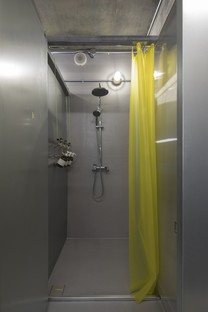 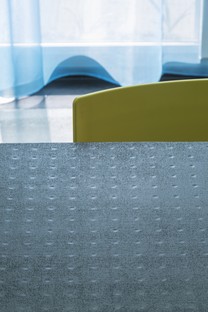 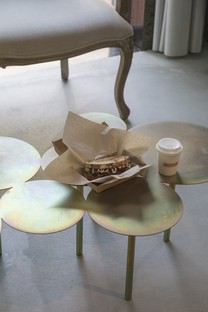 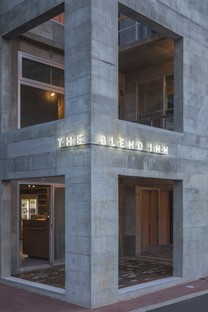 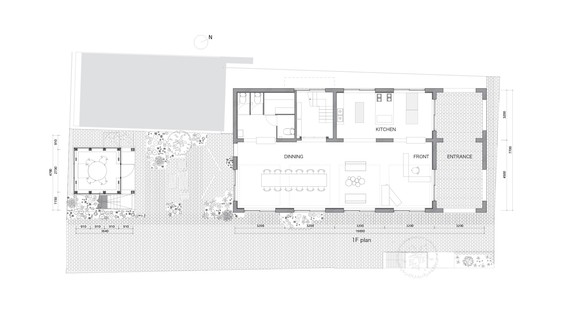 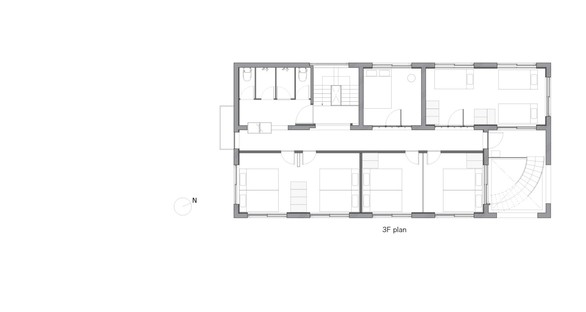