The design of the new Centro de Atención Integrada at the Universidad de Los Andes offered Taller de Arquitectura de Bogotá an opportunity to make the amphitheatre-like plaza across from the centre into a new focus for the neighbourhood. 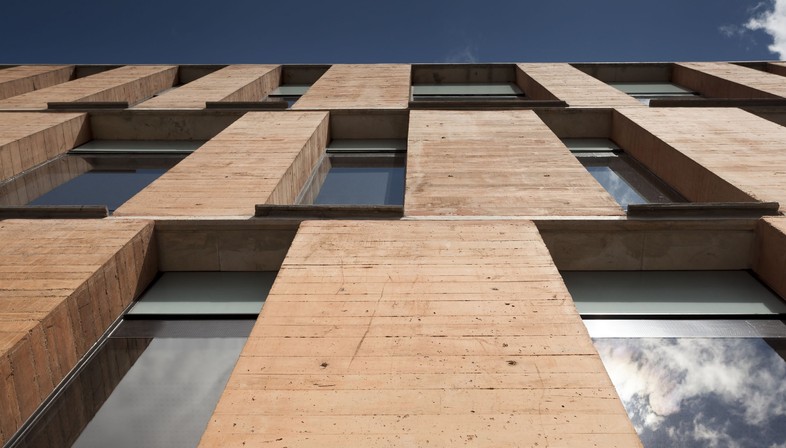 Education is a key theme in the work of Taller de Arquitectura de Bogotá (Daniel Bonilla + Marcela Albornoz), interpreted in terms of its social implications, and present on an urban scale in the Centro de Atención Integrada project at Bogotà’s Universidad de Los Andes.
On the topic of the relationship between solids and hollows in architecture, the architects say: “From a general perspective, the building or project can´t exist successfully without enduring a good relationship with its setting, regardless of its urban or rural condition.” The urban context of this project is the Universidad de los Andes campus in the eastern part of Bogotà, with the Monserrate mountain behind it. The original core of the Los Andes Campus was built in the 1940s and then expanded over the next 60 years until it covered about 10 hectares, a sort of “scattered campus” built on an irregular topography which had to be taken account in the buildings, neighbourhoods, streets and spatial connections. Its vicinity to the touristy central La Candelaria district and the presence of a number of important historic buildings standing out in the more minute structure of the city constructed over the years made it necessary to integrate the existing buildings with new, more flexible and functional ones capable of establishing spatial cohesion. In their plans for Centro de Atención Integrada (CAI), Taller de Arquitectura de Bogotá had to deal with a heterogeneous context, fitting the new service building into its surroundings with a dynamic image and an inclusive attitude.
The new student services centre had to connect, physically and symbolically, the two groups of buildings in block N, between Calle 18a and Carrera 1, which were very different in age and finishes. But it was immediately clear that they could act together on a larger, urban scale, taking into account not only the need to construct a representative architectural fulcrum but the opportunity to identify and qualify the irregular space on the slope across from the centre. They transformed the street into a terraced plaza paved in brick, identifying a well-defined and appropriately designed area in which to hold outdoor meetings, assemblies and entertainment events. With this end in mind, they planned a small bar on the northeast corner, visually balancing the entrance to the eastern sector. The principal element of cohesion was colour, with use of the different colours of the brick, a very common building material in Bogotà, in all the materials used to identify various sites involved in the project. From the bare red-coloured concrete of the Centro de Atención Integrada to the brown cor-ten steel identifying its entrance, also used to build the café and the other portal to the east, and the brick floor covering the amphitheatre plaza, with the buildings around its perimeter providing a natural backdrop: in their use of materials, the architects created a predominantly monochrome project in which the various components are clearly part of a new whole.
In addition to the element of colour, the three volumes share façades marked by vertical panels sharing a common expressive idiom. The CAI building, an almost perfect cube on three levels, plus two underground levels, has an openwork façade alternating coloured concrete walls with floor-to-ceiling windows, creating a bold, vital rhythmic image through the alternation of solids and hollows. From the streets leading to the new plaza the volume of the CAI is clearly visible, dominating the scene, and the other two buildings forming the outer corners, the café and the entrance to the eastern sector, offer a new focus for the neighbourhood and the campus. 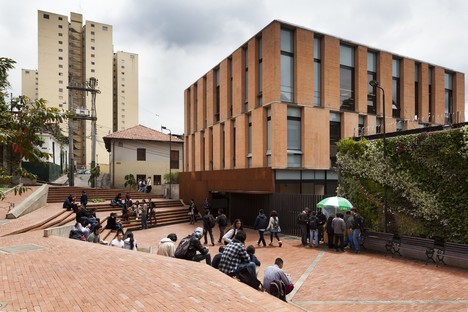 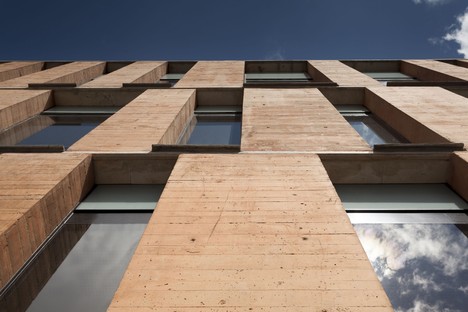 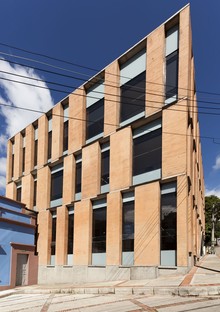 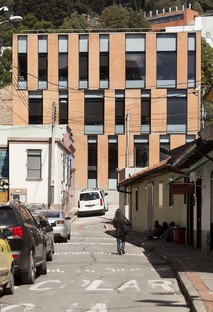 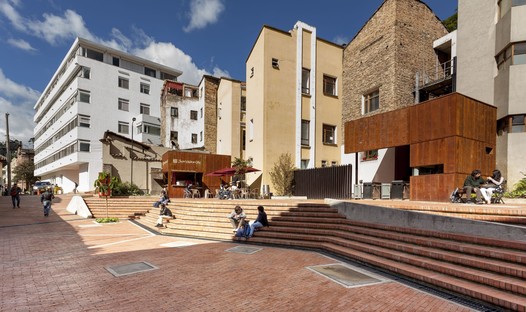 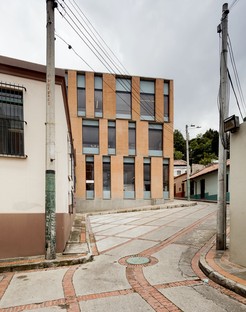 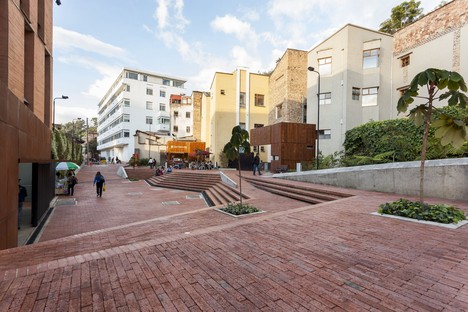 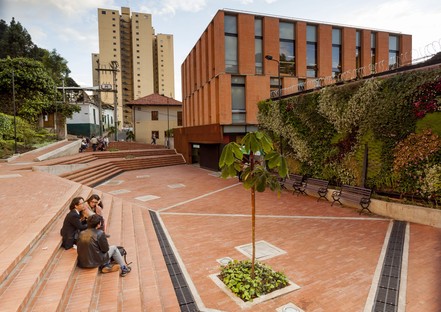 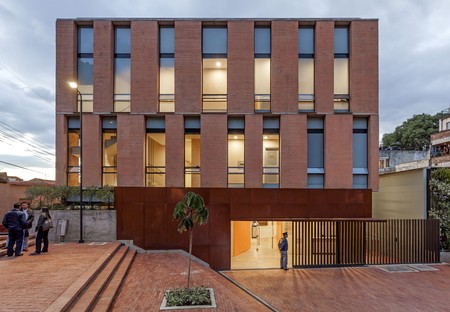 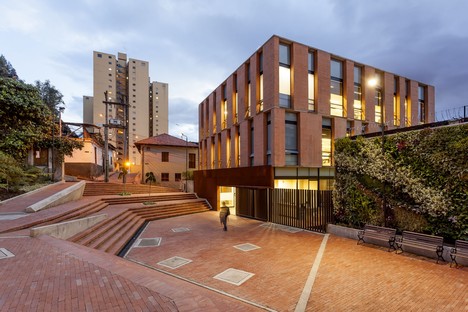 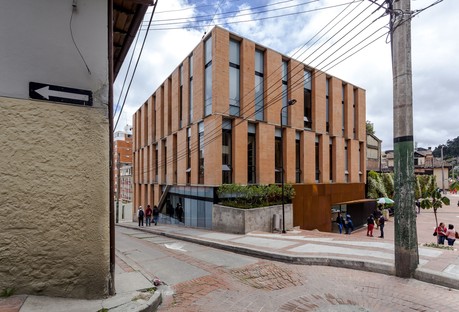 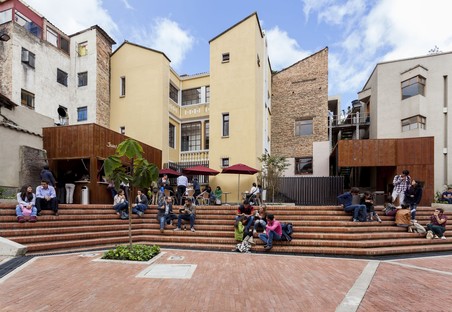 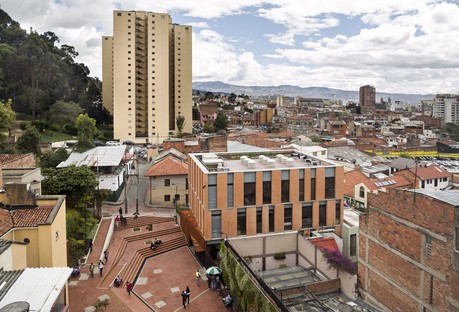 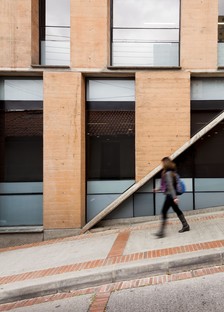 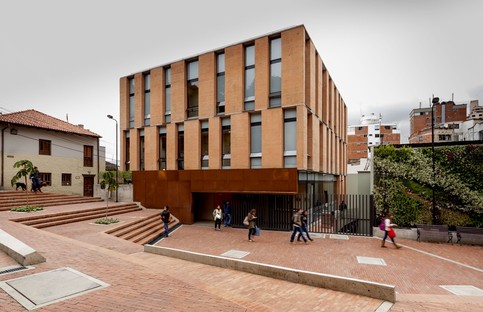 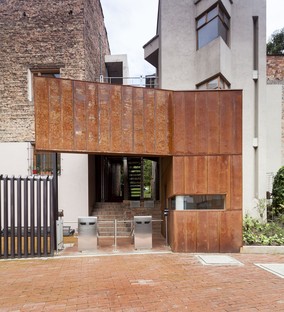 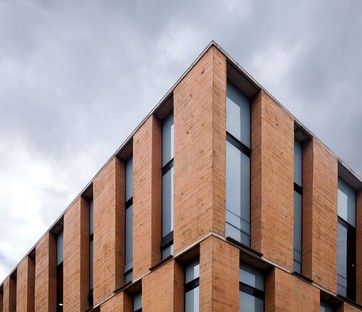 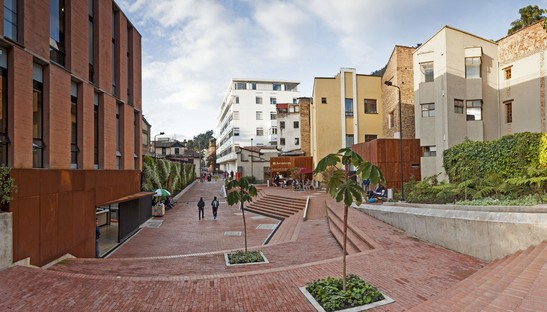 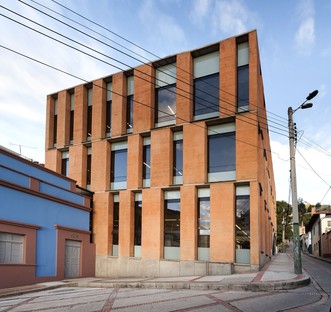 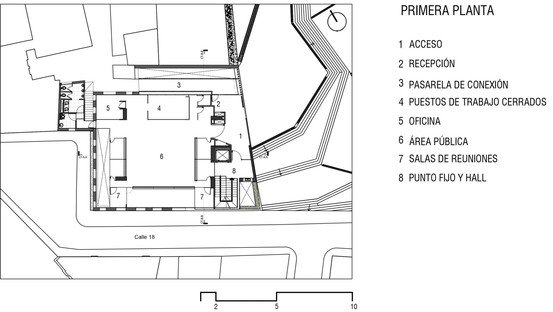 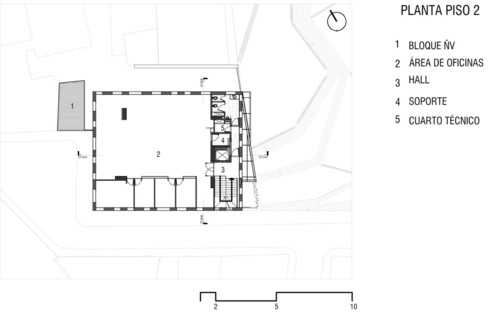 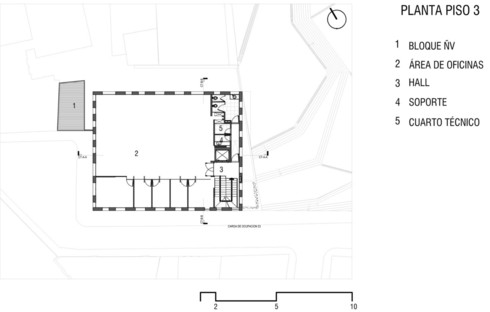 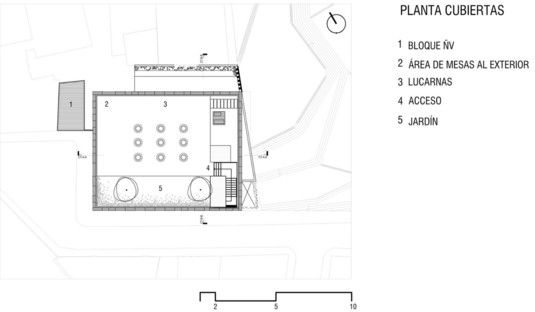