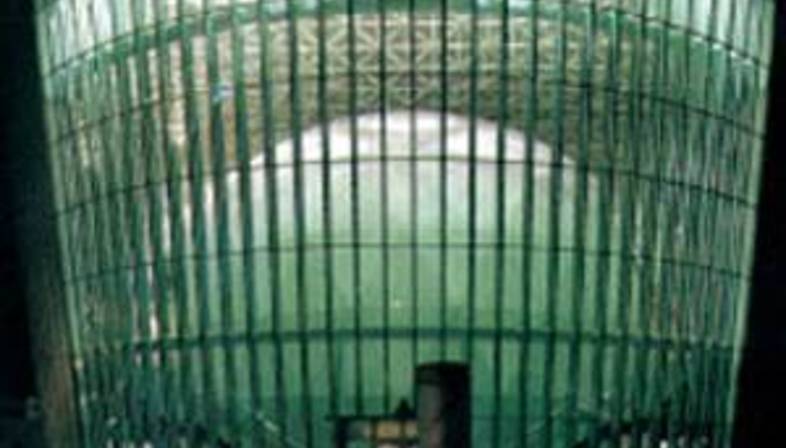 Suntory Museum in Osaka is one of Tadao Ando's most successful expressions of his favourite theme: the relationship between man, water and architecture.
The cultural complex commissioned by Suntory, a Japanese liquor manufacturer, incorporates a gallery of art and design, a 3D IMAX cinema, a series of shops and a restaurant.
Each of the elements in the composition is handled separately and has its own relationship with Osaka Bay and with its natural surroundings.

The land on which the building rises is located inside Tempozan Harbor Village, a recreational park in the heart of Osaka Bay adjacent to the Kaiyukan Aquarium.
The lot was initially separated from the sea by a strip of land owned by the Town of Osaka, and Ando had to fight hard to extend the museum's land, partly because the Construction Ministry requires high protective piers along the waterfront.
It wasn't easy for the architect to persuade the authorities of the feasibility of his idea of creating a plaza with steps leading down to the sea that would be a meeting place, a place for concerts and events, making familiarity with the water a part of everyday life.

In the end the museum was built with a plaza leading down to the sea, 100 metres wide and 40 metres deep, featuring a series of pedestrian paths, ramps, and stairways and a semicircular amphitheatre for open-air events.
Five monumental pillars rise at the water's edge, repeated on a breakwater constructed 70 metres out to sea to reinforce the sense of continuity between the plaza and the ocean.
The Suntory Museum building rises on the northern edge of the plaza and consists of an overturned truncated cone volume intersected by solid bodies rectangular in shape.
Each volume has its own function: the truncated cone houses the spherical body of the IMAX theatre, while the two parallelepipeds intersecting it contain the museum and the restaurant.
The two projecting parallelepipeds are oriented along visual axes and terminate in large panels of glass framing a variety of views over Osaka Bay: the restaurant faces toward Kobe, while the art gallery, arranged perpendicularly to the pier, looks out to the horizon, offering splendid views of the sunset over the ocean.
The building's distribution centre is a first-floor hall accessed directly via an escalator.
The hall is designed as a raised public space offering a spectacular view out over the bay. The shops, restaurant and cinema face onto it, and the cinema's entrance hall is directly connected with a panoramic terrace. BR>The museum itself, located on an upper level, is arranged in two parts: a flexible space for temporary exhibitions and a portion with well-defined spaces housing the museum's permanent collection.
The Suntory Museum is built out of a variety of materials: the large truncated cone is composed of a reticular spatial structure covered with stainless steel and glass in the central part facing the sea, while the rest of the building is built of pre-stressed reinforced concrete. 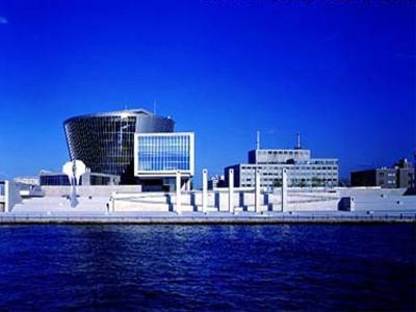 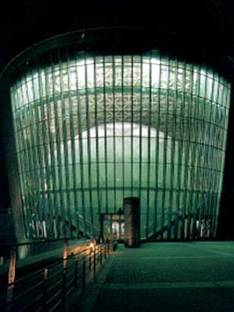 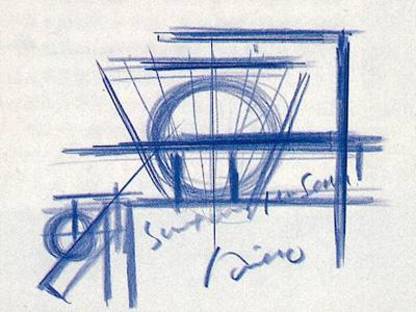 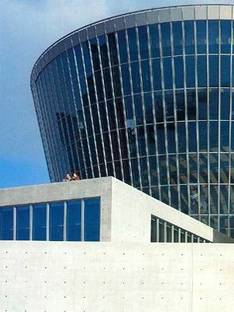 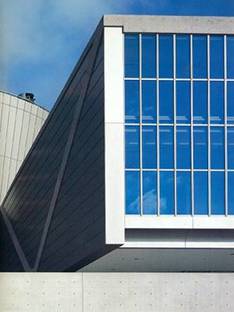