Known for its position as the gateway to mountain Ishizuchi and for its natural springs, the small town of Saijo, in the prefecture of Ehime, is the site of reconstruction of an ancient temple dating from the Edo age, built two and a half centuries ago and now fallen into decay. 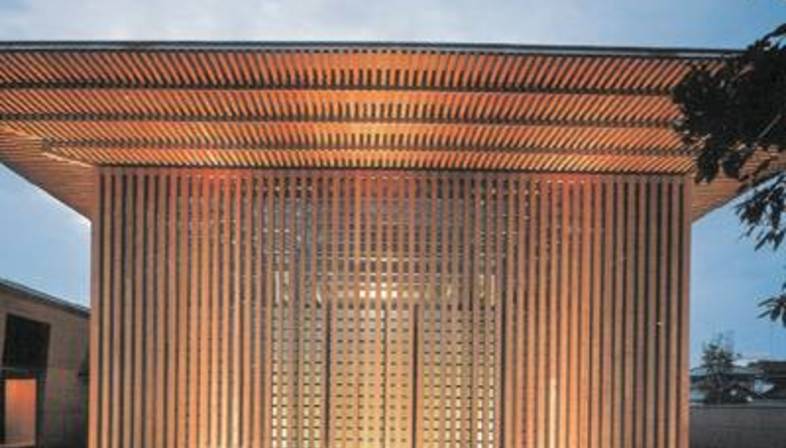 The temple is no longer adequate for use in religious rites, but the monks have expressed a need for an area where they could hold community meetings, a space open to all, as well as a reconstructed guest room and housing for the monks.

Though there were no particular conditions applicable to the design of the temple, the architect referred to the original temple and attempted to preserve the Japanese building tradition, conceived of as an assembly of many wooden elements, returning to the theme of a single structure as a union of many parts, each rich in tension.

After consideration of a number of alternatives, it was decided that the building should be built with a structure of laminated wood, a highly effective material with a layered composition which can create uniform effects and may be used without any waste.
Thus the architects came up with the idea of a large space covered by three layers of crossed beams supported by sixteen columns divided into four sets.
The biggest room is a solemn open space, filled with light, with a floor covered by a hundred mats, bordered by a screen of frosted glass and surrounded by an outer wall consisting of poles measuring 15 x 21 cm, set 15 cm apart and separated by glass inserts to create an effect of indefinite separation of interior from exterior.

Light and the outdoor environment penetrate into the building through the glassed-in wall, and people outside can see what is happening inside the building. The effect of light weight created by the use of wood is accentuated by the presence of water all around the building, which increases the temple's mystical appearance, especially by night, when light from inside the building is reflected on the lake.
The surrounding context was maintained unaltered, in accordance with Japanese architectural tradition, leaving the stone walls and trees on the site untouched.
Though permission was given to do away with the entrance pavilion and the bell pavilion, it was decided that they should be left in place in order to preserve the original geometry of the site, abandoning pure geometry to create a path that winds around the pavilion.

Tadao Ando himself noted, once the project was completed, that the unplanned elements fit perfectly into the context, increasing its value and creating effects of depth in the architectural spaces, and that the design of the building evolved bit by bit, without following any prior plan, gradually rediscovering the value of memory of tradition and the mystic essence of the place in a progressive dialogue with context which gradually took form in the process of definition of the architecture. 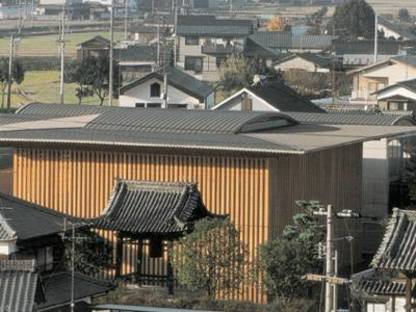 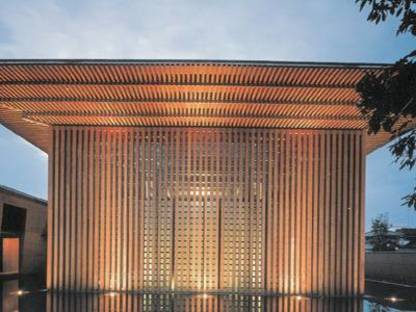 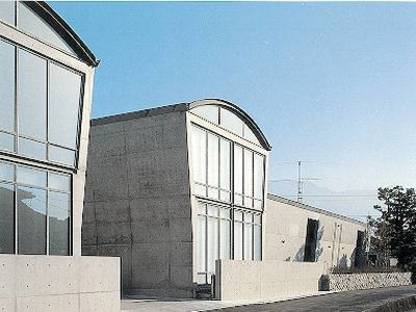 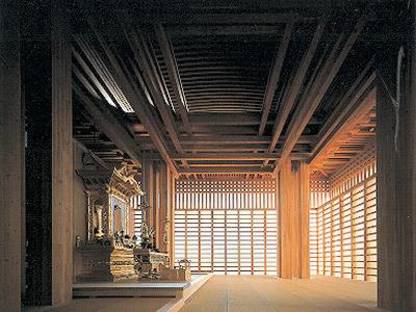 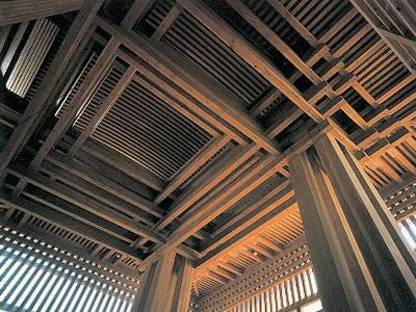