On October 1, the new museum designed by Tadao Ando in the Shunde District in Guangdong province, China opened its doors to the public. For his design, the architect was inspired by ancient Chinese cosmology and by the water pavilions typical of the Lingnan area, yet, as the architect says, based on the western style’s use of light. The museum houses the art collection of the He family, consisting of works of international contemporary art, along with works of modern and contemporary Chinese art. 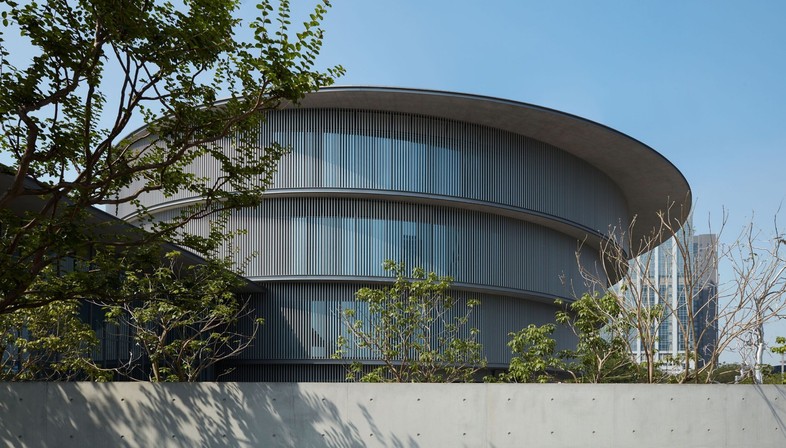 Guangdong province, in Southeast China, lies in a strategic position on the border with Hong Kong and Macao and is part of the geographical area known as Lingnan that extends south of the Nanling Mountains. A region with a strong industrial sector but where, according to the client, a static vision of art dominated. The new museum designed by architect Tadao Ando and which recently opened its doors, fits into this context.
The museum was created to house the large He Jianfeng art collection, ranging from painting, calligraphy, photography and sculpture, and which includes both works of international contemporary art, as well as works of modern and contemporary Chinese art. Taking advantage of the strategic location in the central part of the Greater Bay Area, the future Chinese Silicon Valley, the client hopes that the museum can become a gateway to the culture and arts of the territory, an important centre of communication between the local context and the world. Moreover, the museum would also serve as a hub for the dissemination of art and artistic culture in the community, promoting an idea of harmonious life through the sharing of culture and art.
The "He" museum takes its name from the client, yet it is a word that has multiple meanings in the Chinese language, including "harmony and equilibrium". A harmony that architect Tadao Ando sought out by drawing inspiration from ancient Chinese cosmology, philosophy, western style’s use of light and Lingnan’s terrain. The building’s shape is reminiscent of ancient Chinese cosmology, based on the idea of a square flat earth enveloped by spherical and divine skies. Ancient traditional architectures typical of the area are easily recognisable thanks to their circular plan, which aspired to reflect the divine idea of a "round sky". In the Lingnan territory, in fact, numerous circular pavilions built on the water still exist.
The museum, made of fair-face concrete, a distinctive feature of Tadao Ando’s projects, consists of four overlapping circles that expand from top to bottom. A shape which in addition to recalling the traditional architecture of the territory, inevitably also evokes New York’s iconic Guggenheim Museum. The heart of the new museum is the full-height central atrium, flooded with natural light from the large circular ceiling skylight, while also serving to give visitors a sense of sacredness. From the atrium, the double helix staircase rises up for the entire height of the building, translating the shape of the DNA staircase into architecture and adding dynamism to the exhibition spaces. Natural light, which enters through the large central skylight, as well as from the brise-soleil covering the façade, enhances the forms and creates intricate plays of shadows in the exhibition spaces that change throughout the day. Outside, the museum’s front courtyard has been fittingly named the "crescent garden" thanks to its half-moon shape, once again linked to the cosmological concept that inspired the museum's design. Besides playing a cooling role during the summer, the pond that is part of the garden and that surrounds the building creates a pleasant illusion, causing the museum to appear detached from the earth and suspended towards the sky. 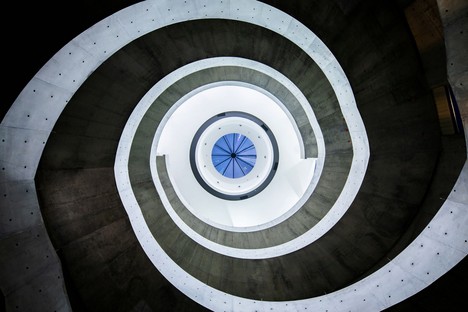 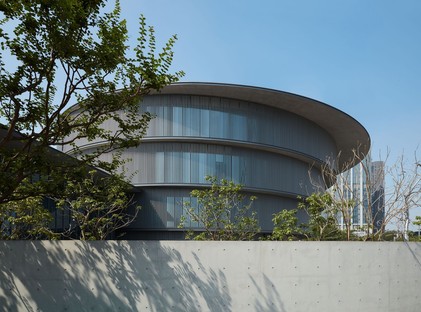 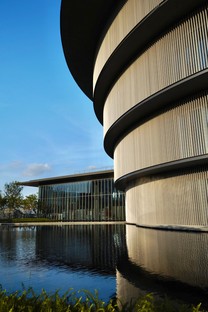 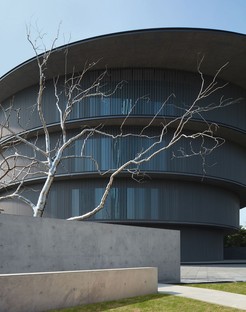 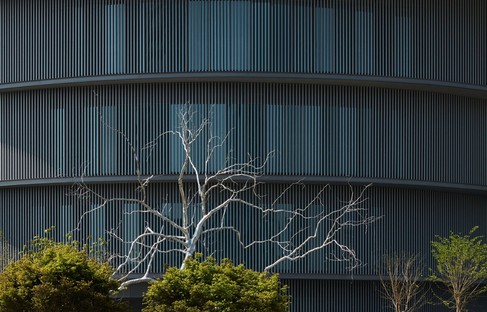 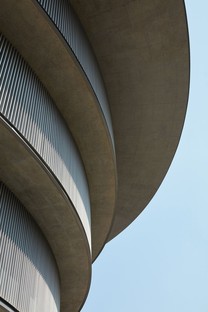 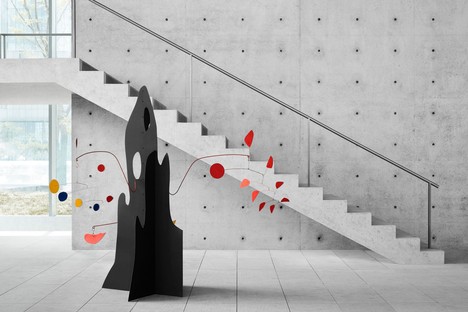 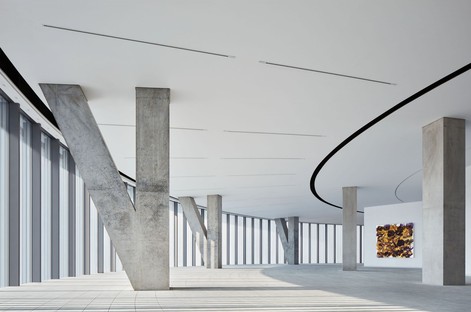