SBG architetti has designed the new Sports Centre in the municipality of Rozzano. In an area characterised by large spaces with green lawns, the architects have created a relatively small building that fits well into the local context and, in the evening, offers passers-by a dynamic cinematic game. 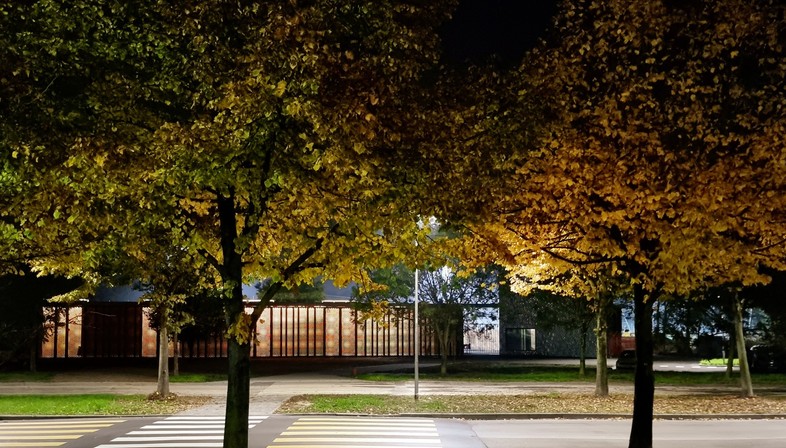 The new Sports Centre designed by the SBG architetti studio for the municipality of Rozzano – and recently completed – is a small structure created to accommodate local sports events related to both amateur and competitive football. The selected site is located on the outskirts of the Parco Agricolo Sud Milano ,a rural area in the southern part of the municipality of Rozzano, almost on the border with the municipality of Basiglio. The landscape consists of large areas with green lawns, witnesses of the agricultural past of this strip of territory of the Metropolitan City of Milan. On a planimetric level, the area develops in north-south oriented routes, deriving from the pre-existing irrigation system. Not far off, along Via della Cooperazione, which delimits the project site to the north and west, a number of social housing projects have recently been completed.
In this context, architects from the SBG studio, commissioned by the Municipality of Rozzano, have designed a single-storey building that elegantly fits into the urban and natural environment. In the evening, the building offers passers-by a fascinating dynamic game, reinforcing its role as a landmark and gateway to the Parco Agricolo Sud di Milano.
The centre meets all the dimensional requirements of a neighbourhood sports facility and the structure that accompanies it consists of two volumes: the tower which houses the bar and a long volume at the direct service of the sports area, where the changing rooms are located.
The latter, which develops in length along Via della Cooperazione, is a 1-storey building facing the road, even if the double row of trees and the cycle and pedestrian path, which delimit the road axis, act as a visual and physical filter. Along this north-west side, the building's façade consists of panels composed of a double layer of laser-cut perforated sheet metal, powder coated and created according to the architects' design. The panels delimit and close off the unheated walking space covered by the projection of the eaves, from which users can access the changing rooms. Through the special design of the façade, the architects have thus obtained a decor element that produces dynamic, three-dimensional effects, simply by shifting the observation point. On the opposite side, towards the sports field, the volume's façade is plastered in grey, while the entrances to the changing rooms are hidden by three walls parallel to the façade.
The “bar” volume, on the other hand, is a tower with a square base, covered with tiles in different sizes that reflect the sunlight and the colours of the surrounding landscape. Between the two buildings, a joining space is created that marks the spectators' entrance, while the athletes have a separate entrance at their disposal on the east side of the building, through the corridor servicing the locker rooms.
The lighting of this space, as well as its yellow colour, are an integral part of the carefully studied design of the main façade of the building. The architects have, in fact, tried to achieve the same dynamism and three-dimensionality as the façade, both during the day and in the evening, enhancing the role of the building as an urban landmark. 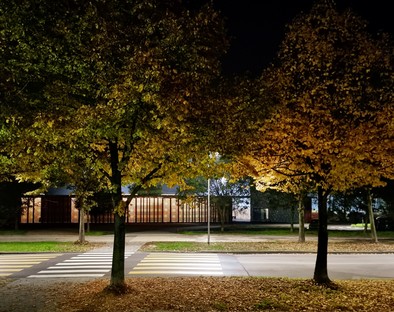 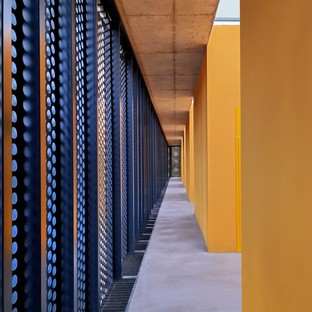 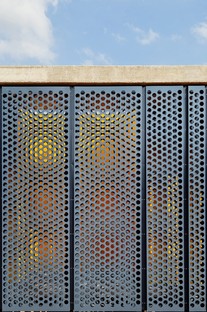 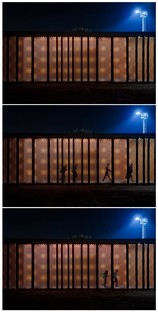