Romàn Cordero's cliff dwellings win a prize at Next Landmark 2014

Romàn Cordero and Izbeth Katia Mendoza Fragoso’s study of cliff dwellings won a prize on the Next Landmark 2014 international architecture contest. Cliff dwellings, the winner in the research category, is a model of a self-sufficient symbiotic structure permitting use of the planet’s vertical surfaces as a human habitat. 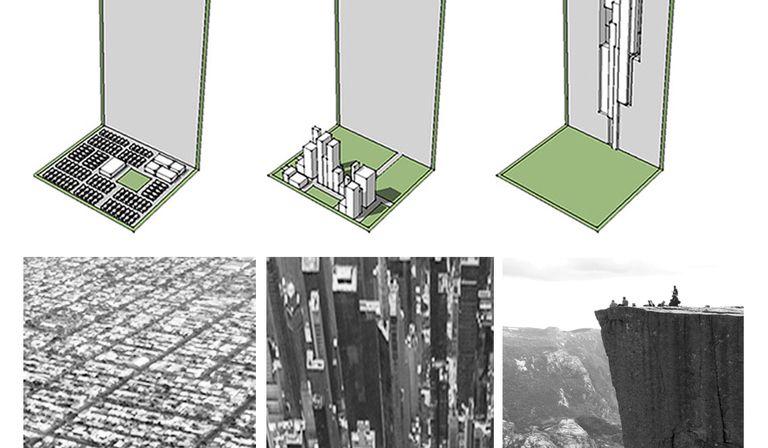 Next Landmark, the international architecture contest organised by the Floornature portal, presented an award in the research category to an experiment in living which borders on the utopian. “Cliff dwellings” is a construction imagined by Romàn Cordero and Izbeth Katia Mendoza Fragoso: a settlement built into the rock, including a whole series of services, such as entertainment, healthcare, parks, etc. Cliff dwellings is not intended for a specific location or tied to particular features, but is a hypothetical model for living on vertical surfaces which may be applied anywhere in the world.

The vertical habitat generated in soil or rock is in symbiosis with the natural element, creating good living conditions for numerous animal species: the model takes advantage of the construction’s good exposure to provide a connection with the outdoors while offering shelter and protection. Depending on the geographic location and the climate where it is built, the soil provides shelter for colonies of termites, meerkats, and ants digging long vertical tunnels; birds such as woodpeckers, squirrels and wood-eating animals find the perfect conditions to make their homes in the wood and make use of natural hollows or dig dens, such as those in the trees. Thus the natural element becomes a structural system and shelter.

Man has also built model settlements in the rock in the past. Only a few of them have been preserved over the centuries, such as the rock settlements of Petra in Jordan, Bamiyan Valley in Afghanistan with its famous Buddhas, destroyed by the Taleban in 2001 and now partially rebuilt, Uchisar plateau in Turkey, with its fortress on the peak blending into the rocky landscape and underground tunnels exploiting the natural cavity in the tufa stone, or the cave village of Guyaju, not far from Beijing in China.

As human beings, we do not simply settle an area but adapt it to suit all our requirements, both functional and aesthetic, analysing perceptive and proxemics models. Art is the exploratory vehicle that best translates our needs and our questions, our relationship with the landscape and our idea of a home in nature, the eternal dialogue between existing and new constructions. In representing the balance between history and future, defined in terms of new models of the vertical city, the cliff dwellings architects look at the work of artists, particularly those who have dug into solid matter and investigated how its heart can respond to human needs. These artists include Eduardo Chillida, with his imposing sculptures inspired by the Basque tradition, and Jorge Yazpik, who works with stone, with small slits like windows or big openings like majestic portals.

The results of the study, which incorporated some fascinating historical and sociological history, is the utopia of a model vertical stone settlement, an alternative to the skyscraper model that was so much abused in the twentieth century. According to the architects: “We have been developing thru the years unsustainable models that year after year are taking more territory to satisfy the necessity of grow. The typical skyscraper offered the chance to have a compact surface in ground in order to have more free horizontal space, but at the end, if we built a lot of them (as the current time) we will end in a sort of situation very linked with the previous one mentioned”. The idea behind the cliff dwellings is reduction of environmental impact by taking energy directly from the soil in which buildings are constructed, taking advantage of climatic conditions to produce renewable energy. Horizontal surfaces, freed of the urgent need to build and make space for our cities, can thus become green lungs for the common good.

As we have seen, this is a utopian project, the purpose of which is not to attempt immediate realisation of a model of rock dwelling but to open the doors of design to new territories for exploration in order to reduce soil consumption. 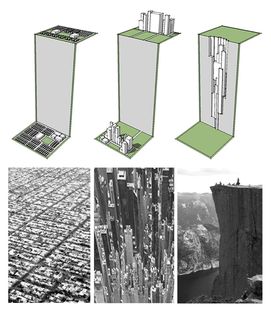 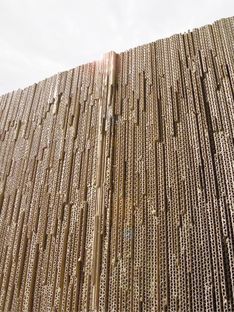 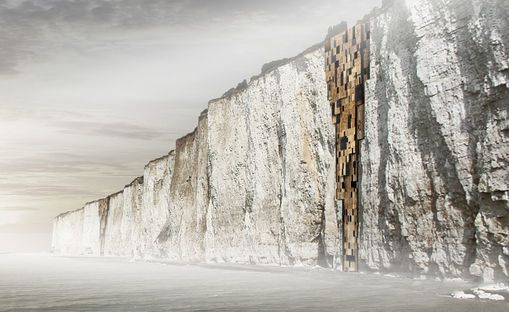 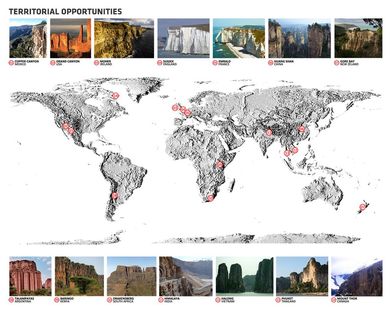 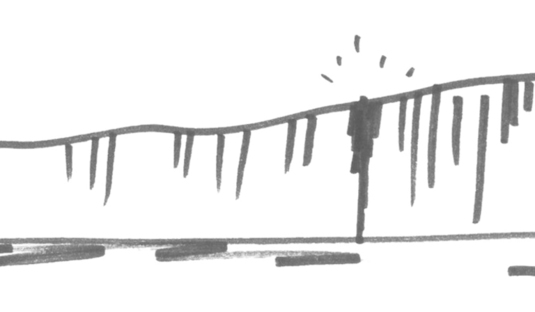 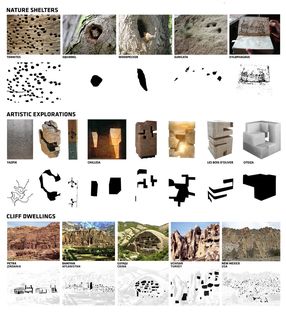