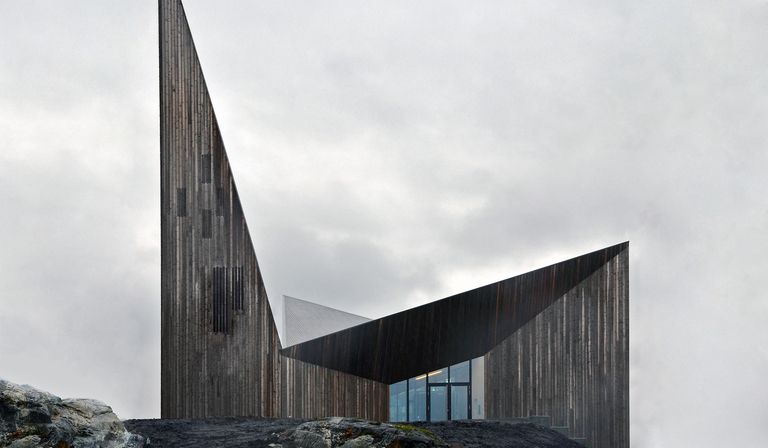 Knarvik, a town on the west coast of Norway near Bergen, now has a new Community Church. Reiulf Ramstad Arkitekter (RRA) designed the building to be not only a sacred space but a public building for activities of social interest, to be used by the congregation but also by the general public.
Reiulf Ramstad Arkitekter (RRA) of Oslo drew on the landscape and history of Norway and specifically the Bergen area with its marvellous historic wooden churches. Knarvik Community Church might be seen as a contemporary interpretation of this history and these building techniques, identifiable in its façades made with boards of local timber.

Winner of a competition held in 2010, Reiulf Ramstad Arkitekter (RRA) formally developed the traditional layout of a place of worship with a rectangular floor plan, with a single nave, a gabled façade and a bell tower to one side. Despite the complex three-dimensional vision, made up of severe geometries rising upwards – seemingly derived from the harsh landscape of the fjords – the layout on two levels is extremely simple, organised around the big sacred space. The bell tower is in the spire rising on the façade of the church, welcoming the faithful and holding up the little cross. The volume, with its monolithic floor plan, becomes expressive in the roof, which expands on the theme of the spire, the tip, the oblique line, in three more forms rising from the base of the façade upwards. This architecture, which is best seen from above ground level, seems to be striving to release its inner energy, raising its “tips” toward the sky. The absence of a base, and the fact that it rises out of the earth in a position dominating the town of Knarvik and its fjords, implies that this power is derived directly from the rock on which the building stands.

This explosion of energy is actually mitigated by the choice of material, vertical strips of aged local pine wood (a variation on the horizontal strips used in the region’s historic churches) used on all the surfaces outside and inside the church and all the furnishings. The modern windows are accentuated vertical cuts with a single pane of glass, adding rhythm to the side and back façades, with a big rose window drawn in the wood. What looks from a distance like a wooden sculpture on an architectural scale turns out on close inspection to be transparent, letting daylight filter inside and making the building a bright landmark at night. The interiors are designed to be used together, joined by sliding and glass doors such as those between the large foyer and the worship hall on the first floor. The recessed façade, made partly of glass, ideally extends the space into the churchyard. 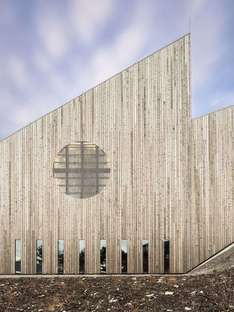 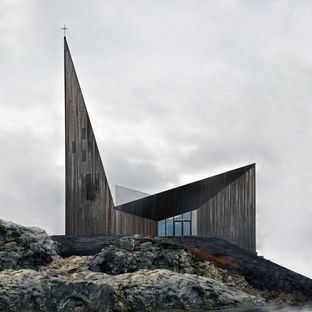 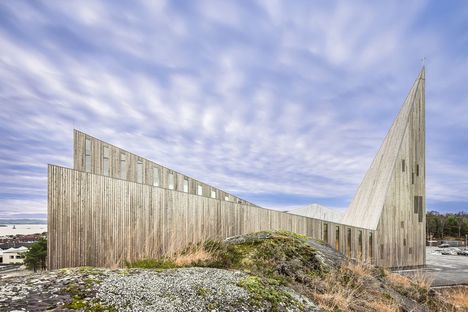 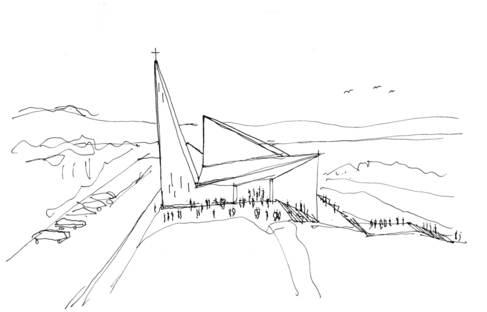 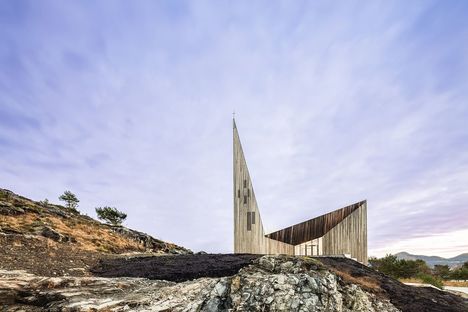 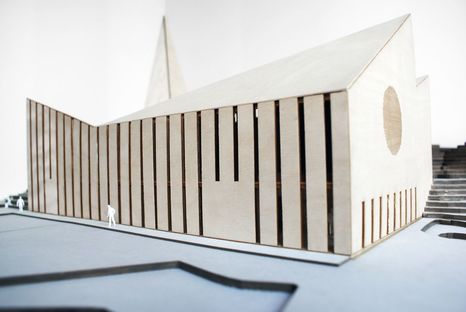 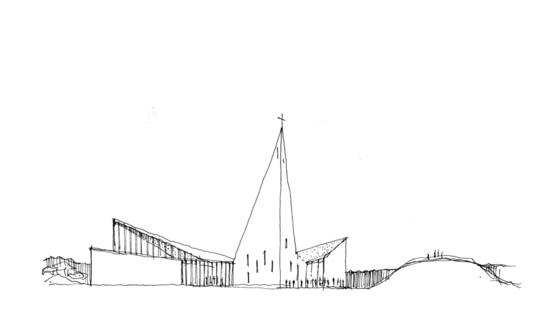 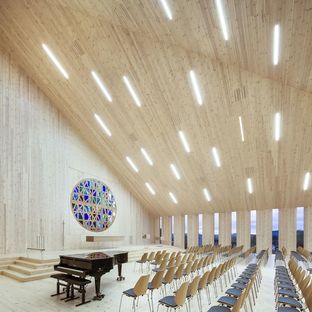 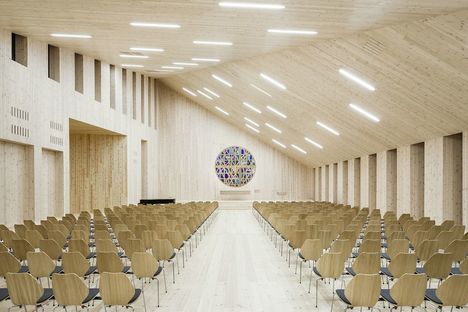 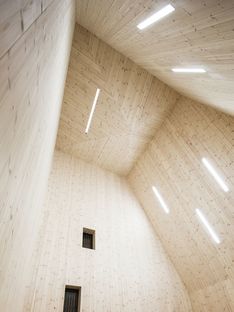 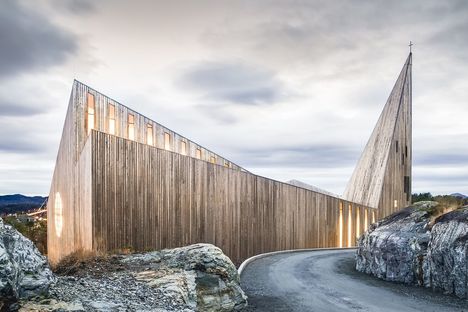 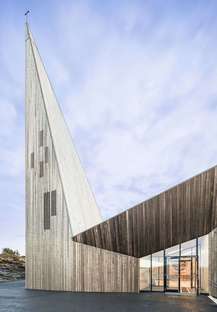 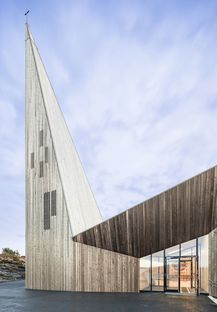 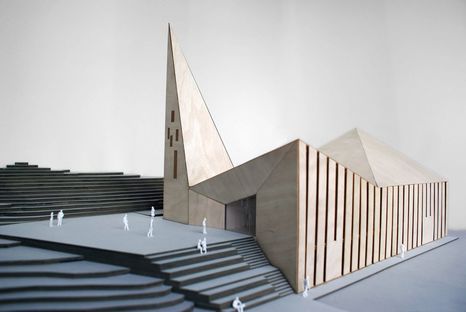 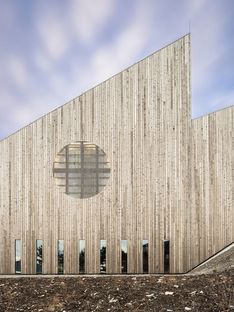 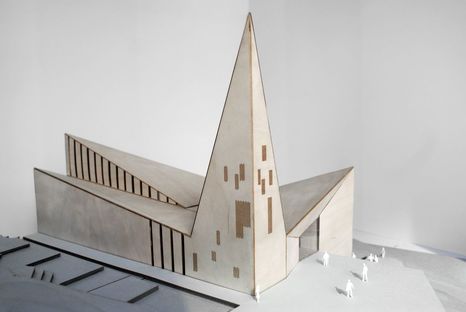 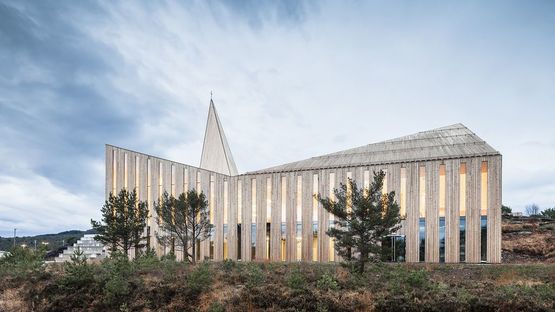 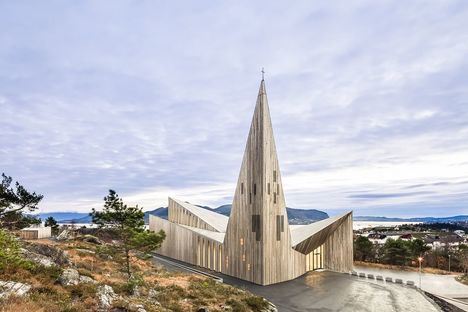 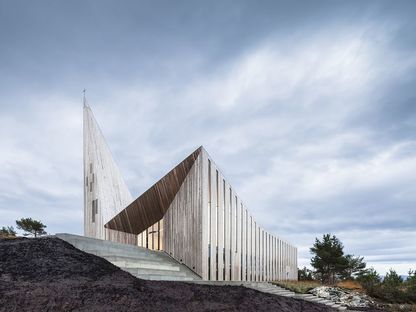 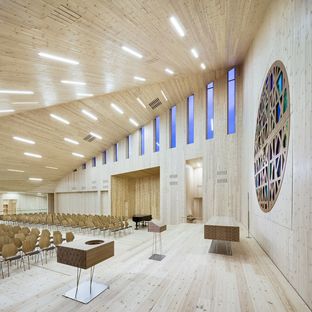 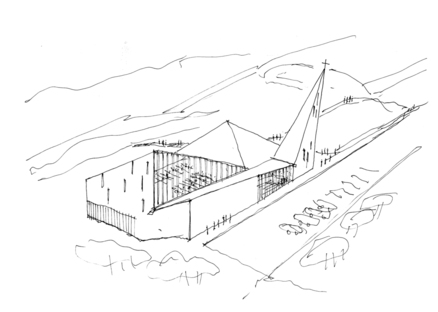