In the heart of green Umbria, in central Italy, the old historic Federici pasta factory was brought back to life as the headquarters of Talenti, Italian company specialised in the design and manufacture of outdoor furniture, with an attentive project designed by the Progetto REb studio founded by architects Filippo Cagnotto and Luca Tedde. In the large grain storage silo the studio’s architects recognised a functional volume representative of the identity of the historic pasta factory, transforming it into one of the characteristic elements of the new headquarters, as well as a strong landmark for the local context. 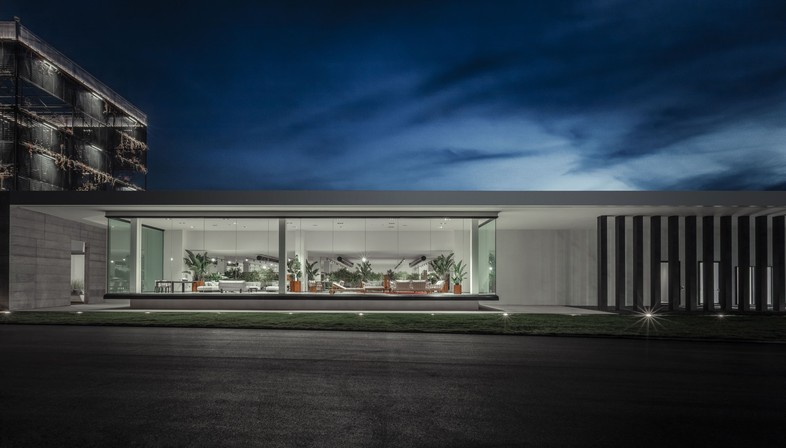 In Italy’s green heart, in the town of Amelia (situated in the province of Terni in central Italy), in an area characterised by a strong rural dimension and where agricultural crops blend seamlessly with the natural landscape, architect Filippo Cagnotto, one of the founders of the Progetto REb studio, completed the design for the new headquarters of Talenti, Italian company specialised in the design and manufacture of outdoor furniture, founded by Fabrizio Cameli. The site selected for Talenti’s new headquarters is the old historic Federici pasta factory, an important operator of the local agri-food sector and of the area’s economic and social fabric, that found itself in financial difficulties and was forced to shut down in the early 2000s. Elements that clearly demonstrate the importance of the site's recovery for the local territory. Architect Filippo Cagnotto thus found himself needing to respond with an architecture which, beyond the aesthetic and the construction-related values, also incorporated a strong element of identity relating to the surrounding landscape. Element that he aptly recognised in the large grain storage silo, a functional volume representative of the identity of the historic pasta factory, today transformed into one of the characteristic elements of the new headquarters, as well as into a highly recognisable landmark for the local context.

Talenti’s new headquarters covers a total area of approximately 80,000 m2, with a built surface of about 20,000 m2 that includes the offices, the logistics centre with the warehouses and a large 2,000 m2 showroom. As architect Filippo Cagnotto explained, the guiding idea behind the design of the new venue was to create paths, both internal and external, characterised by a strong presence of green spaces enclosed within well-defined architectural lines. Carefully eliminating all the unnecessary elements, the architect was able to bring out the pure and strongly industrial forms of the original building, restoring them and giving them a new skin within an innovative and contemporary building. The result are well-designed, clean and elegant spaces, with great attention to detail and to the comfort of Talenti’s employees. The search for defining a fluidity in the paths and in the spatial distribution of the different functions of the site, translates into a new concept for the company’s offices and warehouses. In the offices, for example, the architect designed a large open space, where the divisions between the different departments fall upon elegant metal bookcases. Divisions that are not clear-cut separations, instead favouring interconnection and the exchange of ideas between employees.
The beating heart of the new headquarters is the showroom, where, to be able to appreciate the different collections in a plausible context, the spaces are dominated by a strong presence of greenery and natural light from the large windows. This space houses all the exclusive collections designed for Talenti by leading designers including Ludovica and Roberto Palomba, Ramon Esteve, Marco Acerbis, Cristian Visentin, Nicola De Pellegrini and Jean Philippe Nuel.
The large vertical installation of the tower dominates over everything, a bright lighthouse at night and the site where the company’s most iconic pieces are on display. The perforated metal sheets of which the tower is made cleverly allow the green to develop and grow along the walls. The plants selected for the installation change in appearance and colour with the seasons, a direct reference to the versatility of Talenti’s collections and to the local context, in which the tower becomes a highly recognisable landmark. 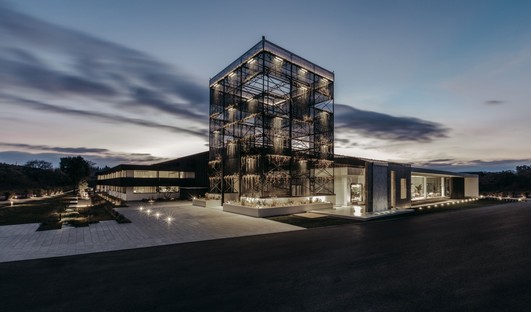 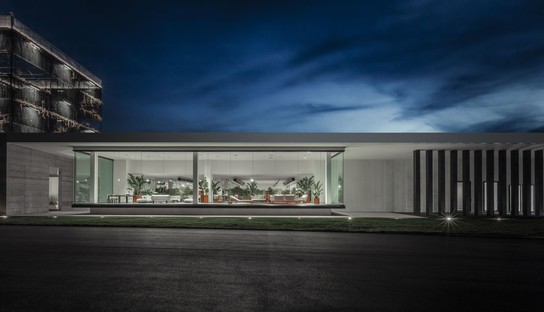 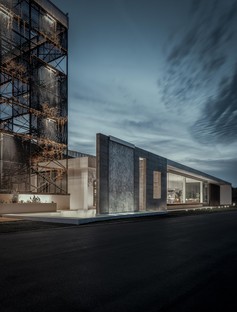 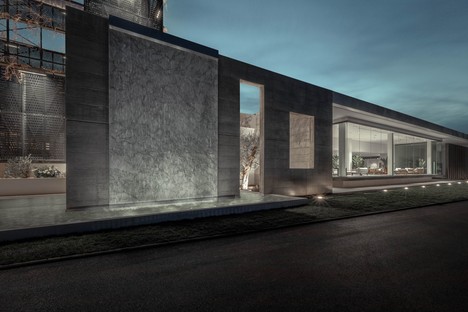 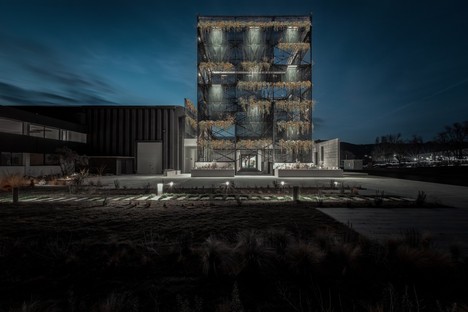 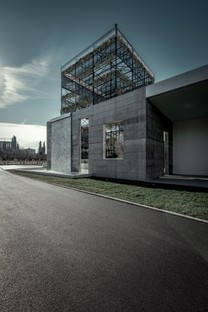 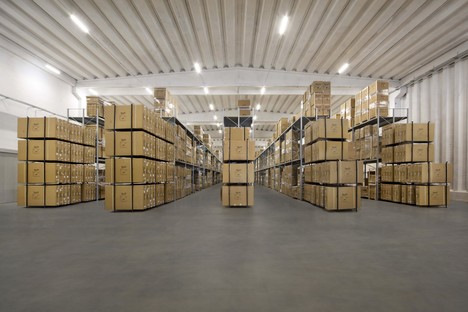 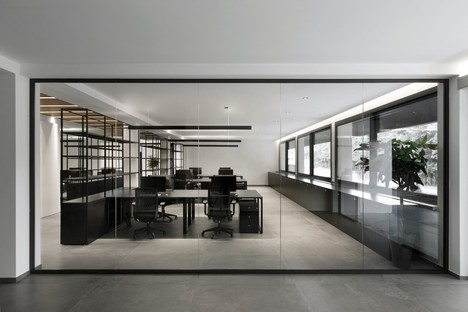 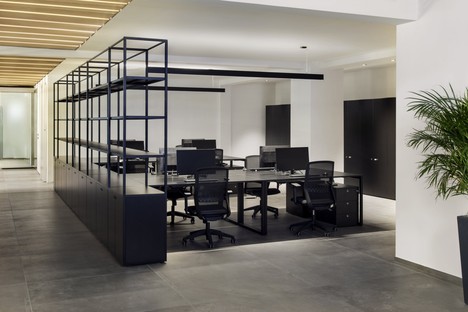 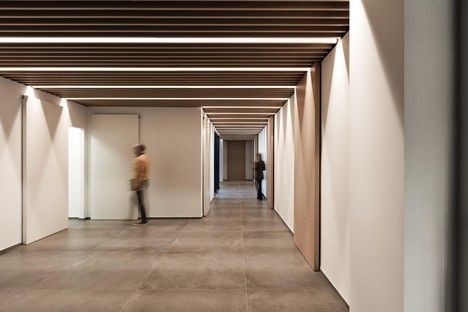 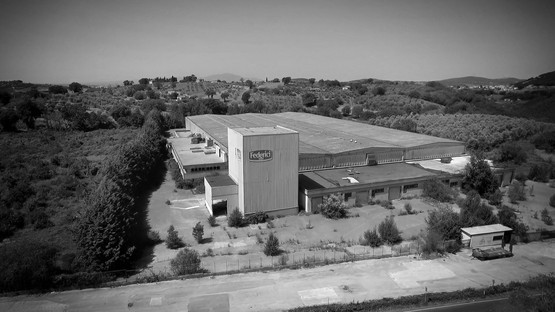 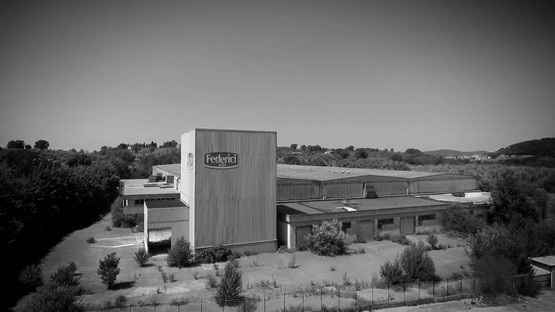