It looks more like an antenna than a tower, rising 1776 feet toward the sky - a number intentionally chosen to recall the year of America's Declaration of Independence: The Freedom Tower will be the world's tallest building and stand on the site of the Twin Towers. The symbol is simple but it gets the message across, commemorating the tragedy of September 11 in the sky, while Michael Arad's Reflecting Absence does the same in an underground space.
But unlike the memorial, the Freedom Tower is not intended to evoke memories of the past; it rises upward, bright and shining, representing optimism and a vision of the future.
The 541.4 metre building will be built to plans by Daniel Libeskind and David Childs, though the New York Police Department has demanded a series of changes to the project for security reasons. The foundation plate (a 200 foot or 60.96 metre square) will be shifted 90 feet (27.4 metres) from West Street, because the biggest worry is the building¿s vulnerability to another attack, this time from the ground by a car bomb most likely to come from West Street.
The building will be reinforced with a concrete wall covered with steel and titanium.
The base of the tower will therefore no longer be shaped like a parallelogram, but like a cube; it will change shape as it rises upward, transforming the square base into eight isosceles triangles so as to form a perfect flat octagon halfway up. At the end of the tower, a 276 foot spire lit up by night will rise upward to recall the torch of the Statue of Liberty. 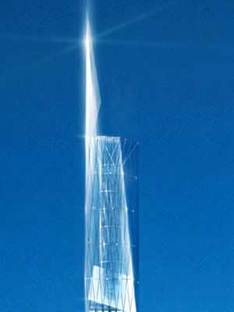 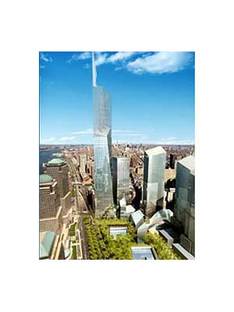 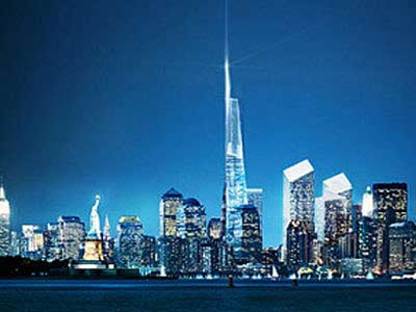