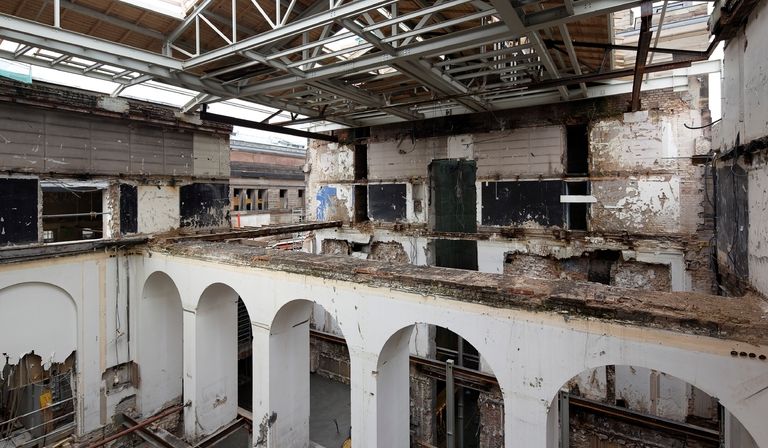 After 7 years of work, the restoration of the BNU Strasbourg’s National University Library by Michelin et Associés, winners of the 2006 competition, was finally completed at the end of 2014. The new National University Library in Strasbourg takes into account the stratification of time, and Michelin et Associés have restored the distinguishing features of this historic monument while adapting it to meet today’s requirements.
Founded in 1871, Strasbourg’s National University Library benefitted from the German Empire’s policy of reconstruction after the end of the Franco-Prussian war leading to the annexation of Alsace. For 25 years the library was located in Palais Rohan, until the majestic building designed by August Hartel and Skjold Neckelmann in the historic revival style, overlooking Place de la République, was opened in 1895. When Alsace was returned to France, government investment in culture continued, and by 1918 the library had more than 1,100,000 volumes, making it the second largest in France. The new complex was bombed in the Second World War, and the 1950 restoration gave the interior a very different layout from the original.

Michelin et Associés’ work on Strasbourg’s National University Library, which the French now abbreviate as BNU, makes the most of the original building’s symmetrical square layout and monumental façades. The project underlines the centrality of the foyer and the dome above it, adding a spiral staircase from the first to the fifth floor which visually links all the levels and reading rooms. In a form of dialogue appropriate for its historic revival style, with the big volumes and grand symmetrical spaces of the original construction, the new staircase fits into the empty space in the centre of the building without physically “filling it up ”. Its transparency and the resulting perception of lightness allow us to see beyond, so that we can glimpse the full extent of the foyer and the height of the building’s floors. Its structure, result of a contemporary idiom that dialogues with the nineteenth century lexicon by contrast, is supported by stainless steel cables forming two upside-down truncated cones joined in the middle, just under the base of the dome, to let light filter through from above. In the gravity created by the importance and imposing style of the historic building, the staircase fits into the space like a separate architectural construction without weight, which nonetheless maintains an image of grandeur created by its vertical rise of more than 27 metres and the tension inherent in the spiral structure.

Major restoration operations were performed on the four courtyards at the corners of the foyer, which are covered over with glass roofs and contain big reading rooms. The indirect natural lighting, the chosen materials, the transparencies and whites of the vertical surfaces isolate the surrounding environment from the original historic structure. 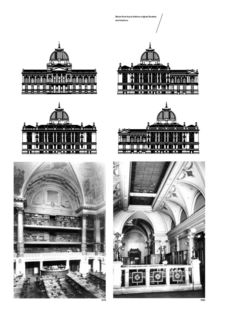 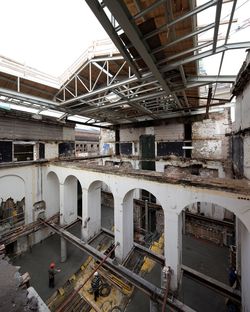 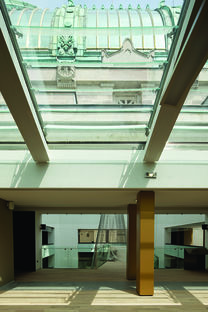 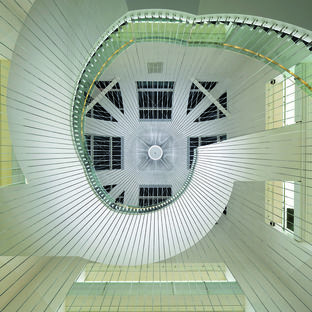 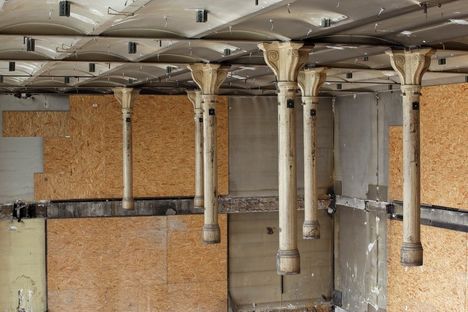 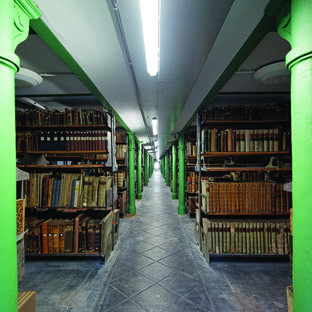 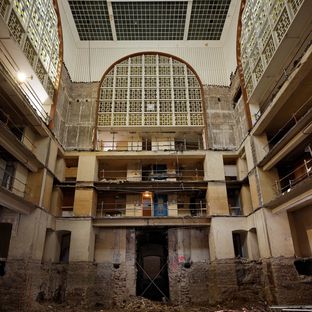 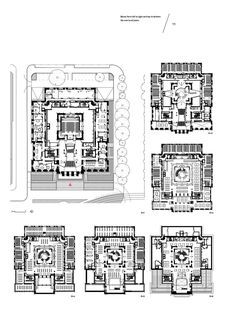 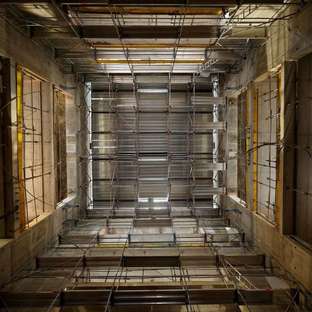 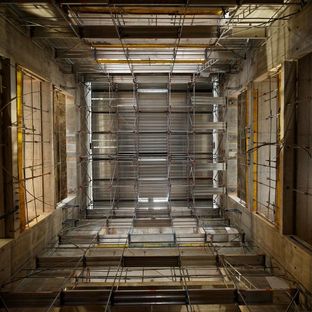 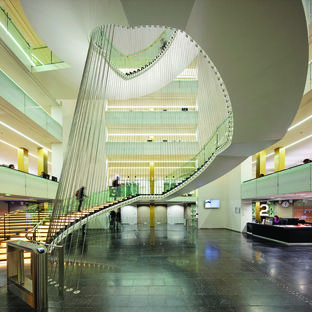 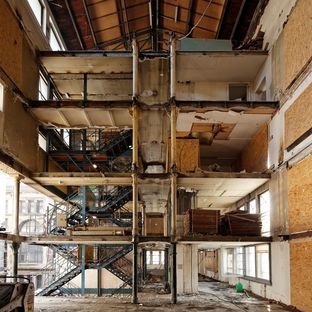 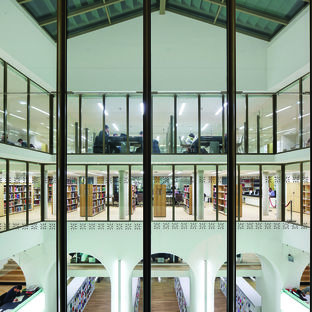 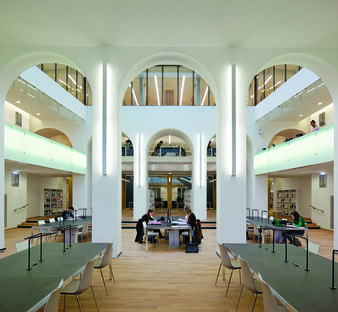 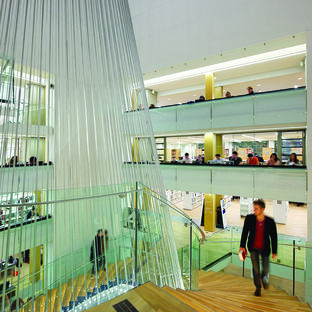 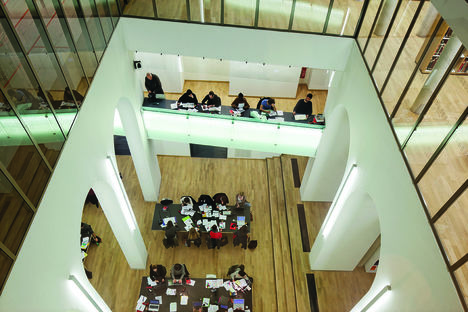 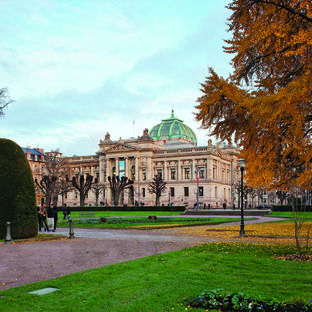 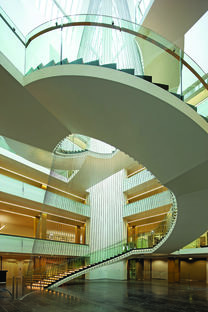 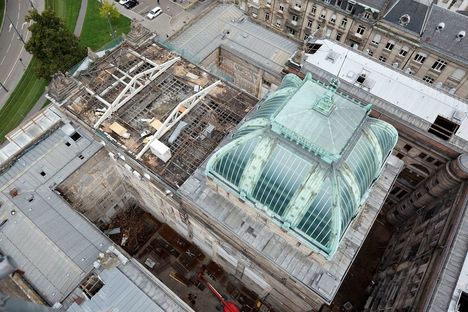 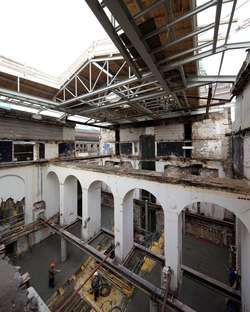 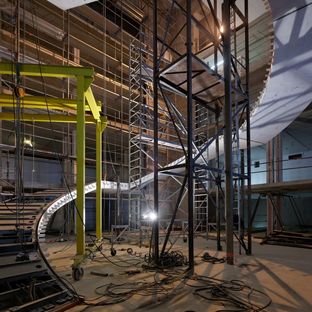 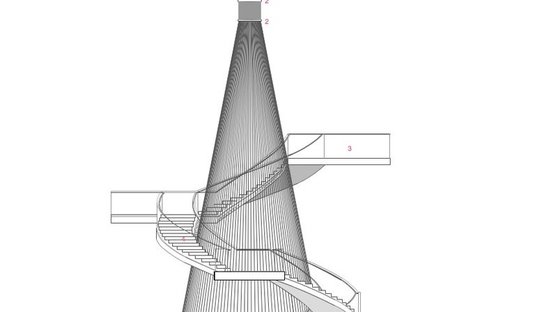