Inspired by the history of Cordova and the days of the Califate, Mecanoo’s Courthouse stands in the Arroyo del Moro, of which it has become a symbol. Dutch studio Mecanoo has built a big concrete complex broken up by green patios. 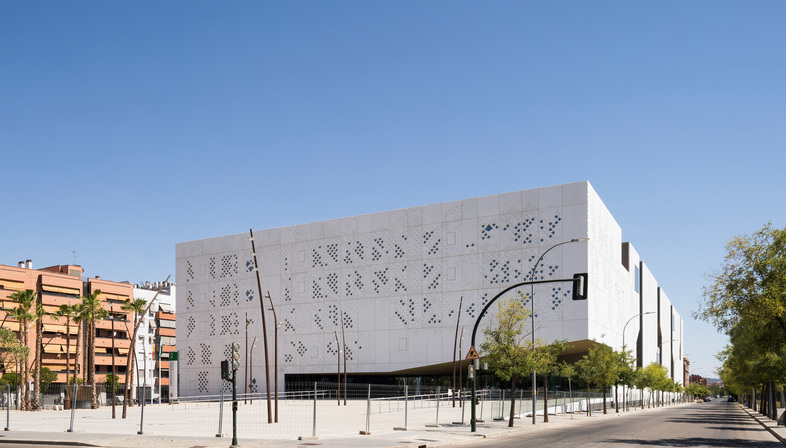 Other photos...
A new white building stands out among the residential blocks of the Arroyo del Moro in Cordova. This imposing contemporary building, clearly demonstrating the inspiration of its Moorish past, is a new Courthouse built by Mecanoo, the Dutch studio famous for buildings such as Birmingham Library in England and Llotja Theatre and Conference Centre in Lleida, Spain, the significant façade of which is treated as a means of communication with the city.
Cordova Courthouse continues this study, presenting decorated concrete walls inspired by the Arabian style. The Andalusian city’s history and traditions owe a lot to the domination of the Omayyad dynasty in the 10th century after Christ, when a califate was founded in Cordova, ushering in a time of great economic prosperity. The new building stands out in an outlying district to the northeast of the city, standing on a lot shut in among tall towers of apartments overlooking Calle Isla Gomera and Calle Isla Formentera. The other walls face green areas, a football field to the west and the Huerta del Sordillo gardens to the north, with which the new complex dialogues thanks to a symbolic garden of palms in the square in front of the main entrance.
The fibreglass-reinforced concrete panels covering the structure are perforated in a geometric pattern, creating fragments of different sizes, partly decorated and partly made of glass, acting as sunbreaks for the classrooms inside. Rather than making reference to specific monuments in the city, Mecanoo has designed the building in an Arabian style incorporating the arabesque motifs associated with the idea of Middle Eastern culture in the world, especially Europe. While the decorative level is the most immediate level of representation of Mecanoo’s message, the project is particularly noteworthy for its treatment of volume. By studying the blocks making up the urban fabric of the Arroyo del Moro, their compactness and recognisability, the project develops a monolithic monumental architecture which is then broken up, literally opening up to the view of the neighbourhood: the idea of a “city within a city”, as the architects of Mecanoo say. A rectangle based on the shape of the lot is cut into many parts, opening fractures which become the same number of patios, connecting the interior with the streets around it.
As a result, the monolithic initial set-up revealing the building’s unity is fragmented and given motion by the deep cuts created by these courtyards, which let light and air into the heart of the building. Seen from above, the structure does not seem extraneous to the make-up of the city as it has expanded into this outlying district by a process putting together orderly blocks. After all, the building constructed around a courtyard is typical of Mediterranean architecture, to which the Courthouse clearly pays homage.
Observing the layout of the floors, the building has a central backbone extending along its entire length, forming an axis of circulation to which all the blocks separated by patios are connected. The ground-floor entrance is located on the northern wall, on a slightly sloped paved plaza; it is a monumental door consistent with the building’s scale and the importance of its public function, but its asymmetrical position on the façade makes the entrance look more inviting, mitigating its imposing nature. On the same level as the plaza, the courthouse has an open ground floor containing public areas such as the courtrooms, the marriage registry and the restaurant. The archives and prison cells are on the underground level, while staff offices are located on the upper levels. 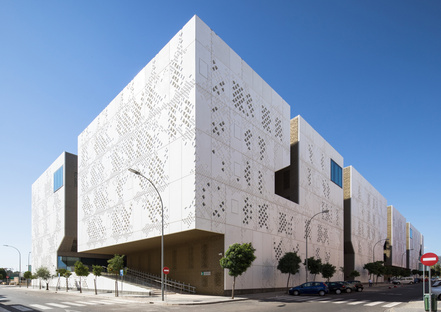 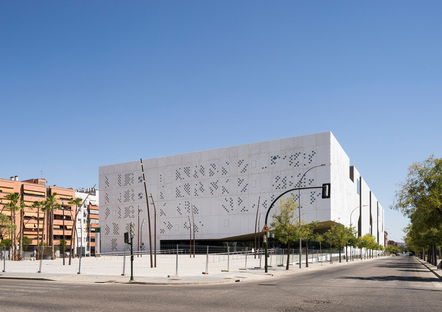 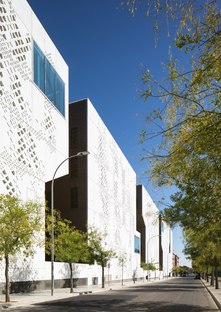 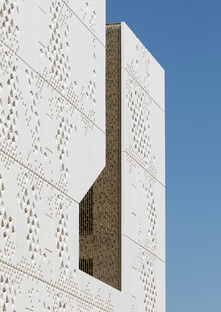 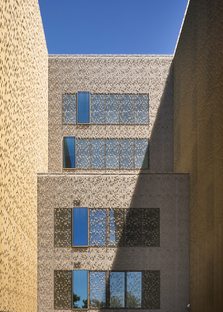 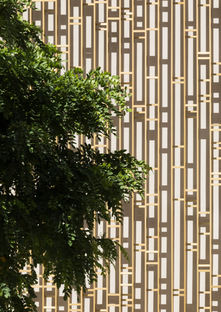 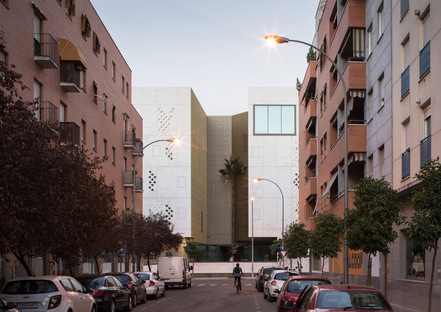 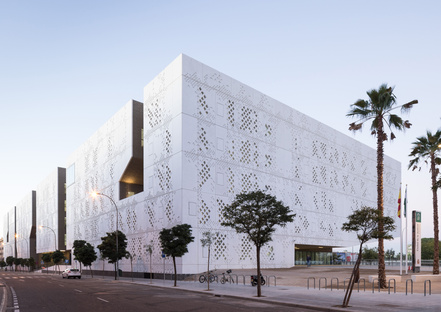 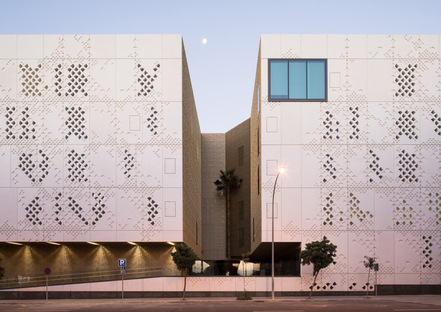 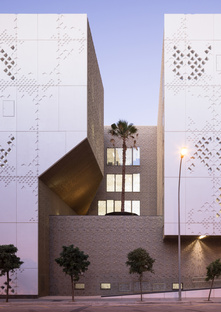 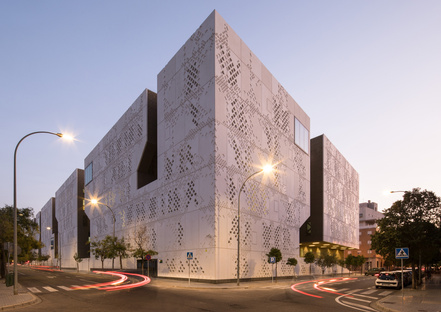 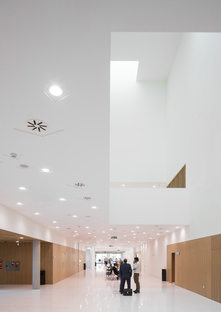 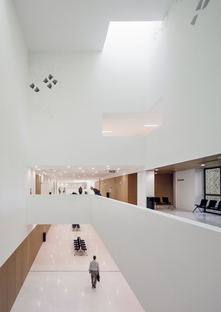 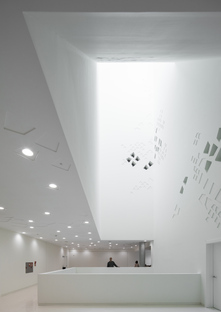 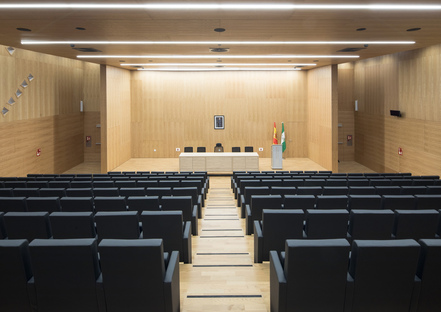 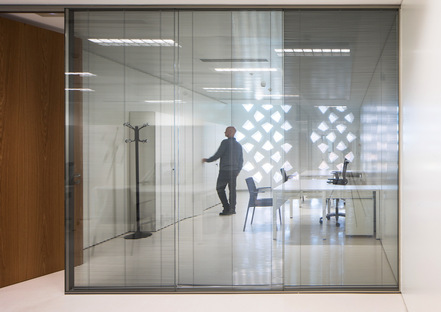 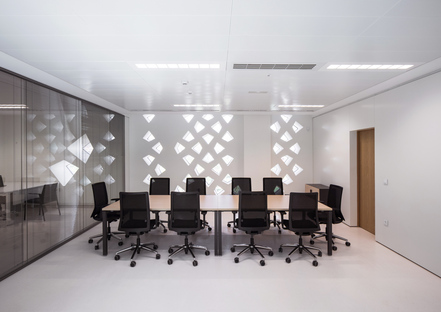 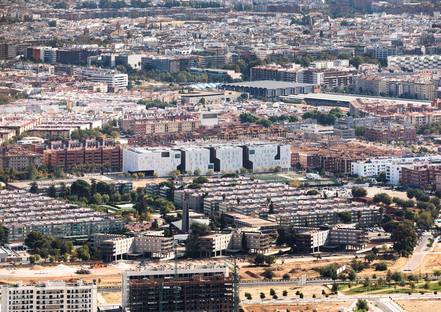 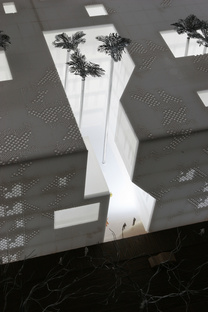 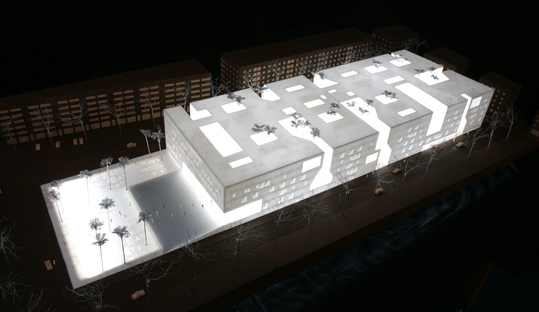 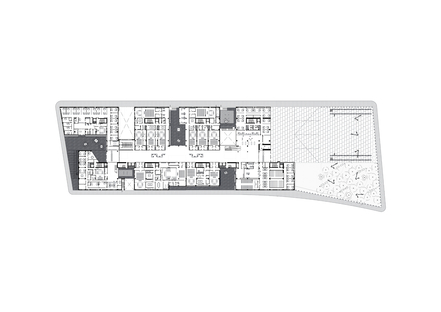 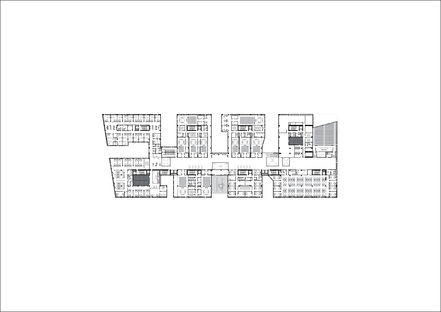 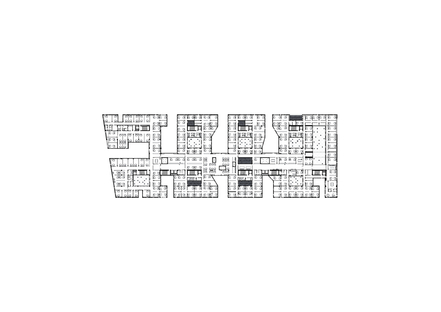 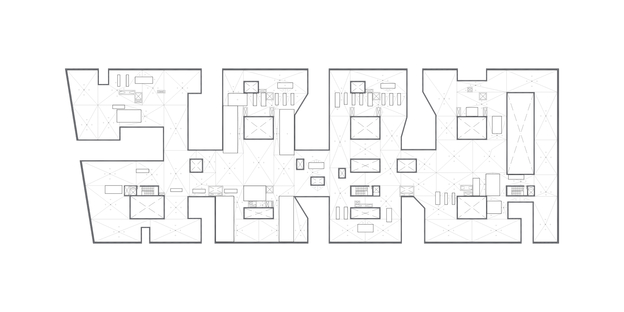 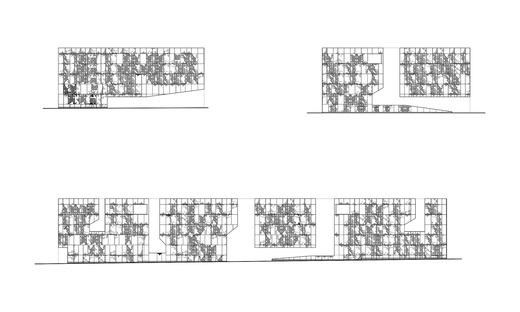 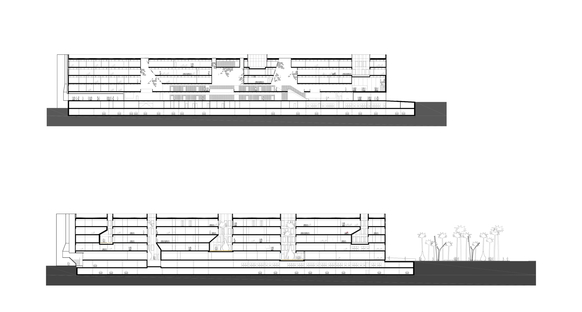 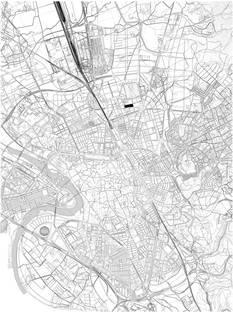 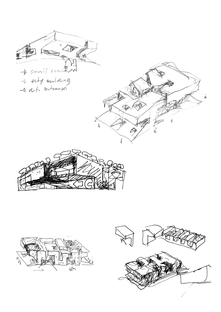