Architect Manuelle Gautrand and her studio have designed an interesting project for Montpellier: the “bijou”, as the Occitan word “Belaroïa" indicates. Located between the city centre and the new urban development areas, the project is a mixed-use complex consisting of two hotels, apartments, a restaurant, a SPA, a business centre and an underground car park. 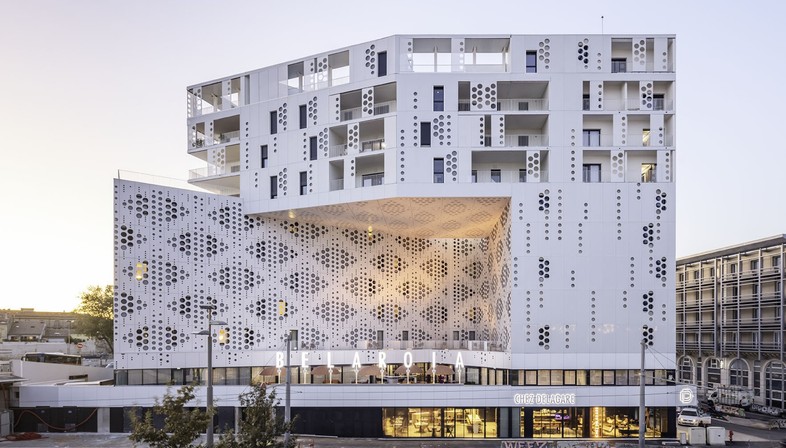 Looking at the intricate light effects, both natural and artificial, on the façades of the new building designed by the Manuelle Gautrand Architecture firm, it is easy to understand why it was named “Belaroïa”, an Occitan term that can be translated as “bijou”.
We are in Montpellier , France, in a strategic position between the city centre and the new urban development areas, opposite the Montpellier-Saint-Roch railway station. A key position thanks to which Belaroïa sets the standard, as well as being the first completed project of the new ZAC Nouveau Saint-Roch development area.
/> The building designed by architect Manuelle Gautrand and by her firm, is a mixed-use complex consisting of a 3 and a 4-star hotel, 12 apartments, a restaurant, a SPA, a business centre and an underground car park.
The relatively small size of the lot placed significant limits on meeting the client’s demands. The architects overcame these limits brilliantly by working on an overlapping of volumes intended for different functions and sharing part of the vertical circulation routes among the various functions.
The first building volume is a podium which follows the triangular shape of the lot and which groups together common functions such as the business centre, the underground car park and the restaurant, as well as the entrances of the others. From this podium two volumes rise up: the Campanile Hotel and the Golden Tulip Hotel. The façades of the two hotels follow, respectively, the North and East alignment of the roads delimiting the site. The third main function played by Belaroïa, namely its residential function, is fulfilled by the upper volume set between the two previous ones and occupying a South-West position along the third side of the triangular lot. 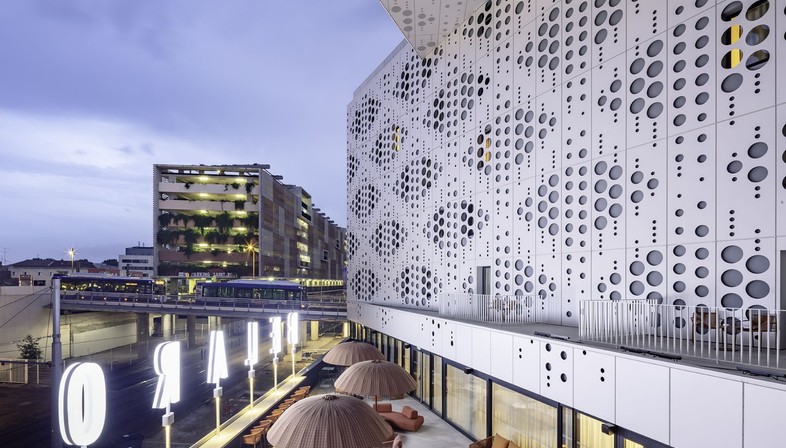 The volumetric continuity of the complex is ensured by the homogeneous cladding system that covers all the façades, cancelling out the distinction between the main façade and the secondary ones. White was chosen to reduce heat absorption, while the use of solid or perforated panels is dictated by the specific needs. The hotel room windows for example are characterised by large round openings, while to protect the apartment terraces and guarantee a little bit of privacy to the inhabitants, the façade panels have been designed to slide rather than being set in place.
The articulation of the volumes creates a concave shape and gives life to a truly special space: a café with a scenic lookout terrace over the surrounding urban context. An exclusive meeting place not only for the various functions performed by the complex, but also for the city. The architects have created a true urban living room facing the southern sun, while at the same time protected from excessive summer sunlight. A space that offers itself to the city thanks to the privileged position of its podium and that looks towards the railway station, the distinctive element of the entire neighbourhood. 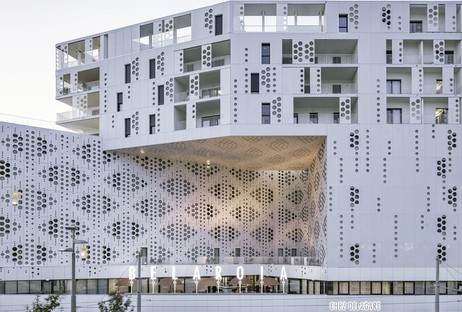 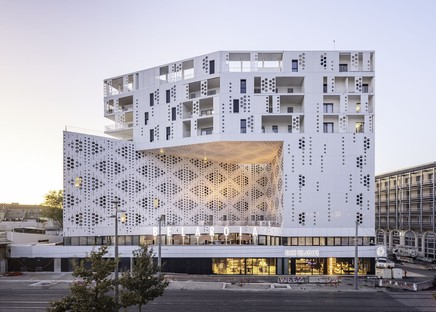 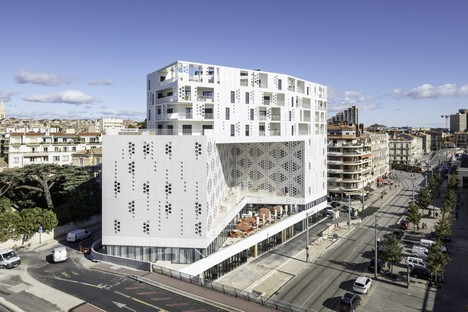 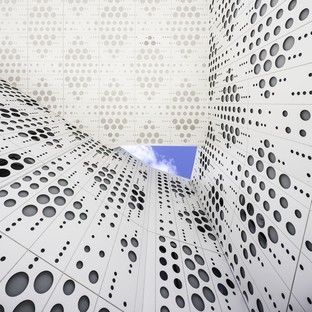 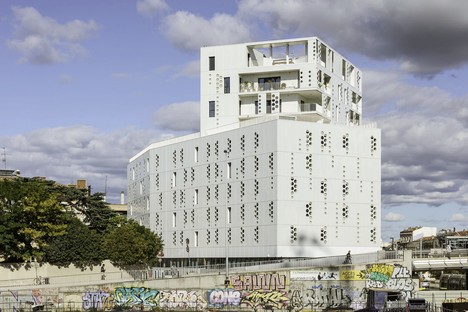 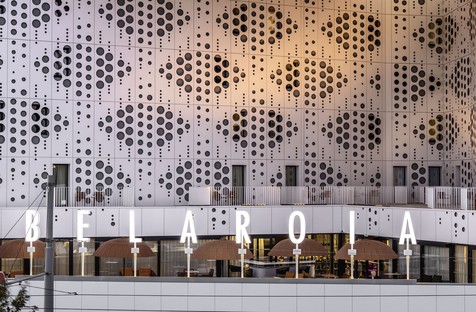 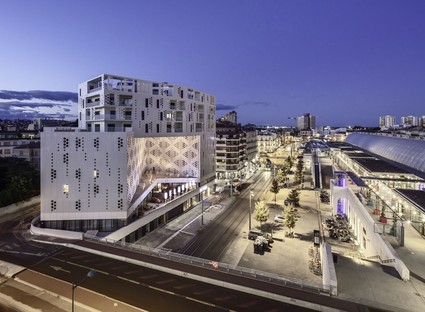 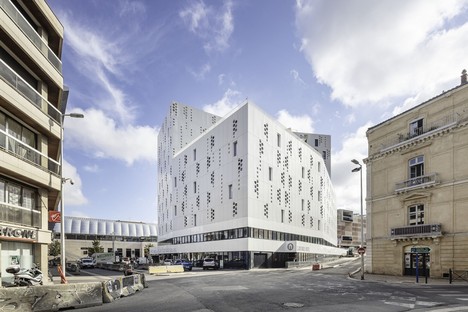 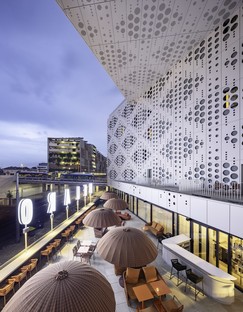 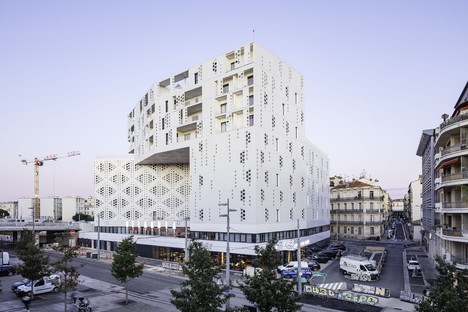 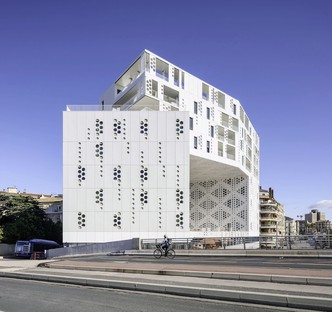 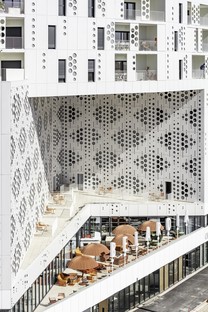 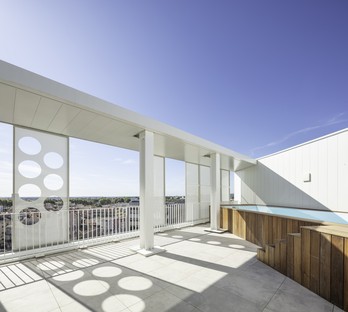 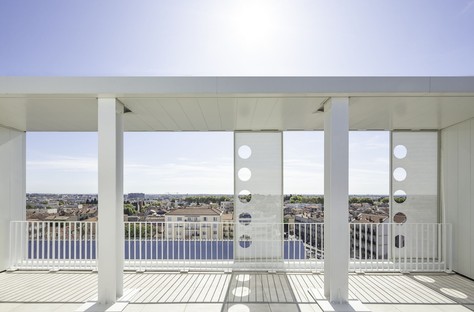 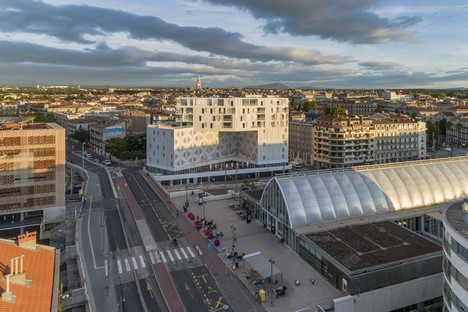 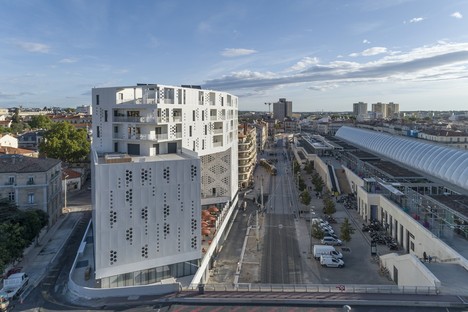 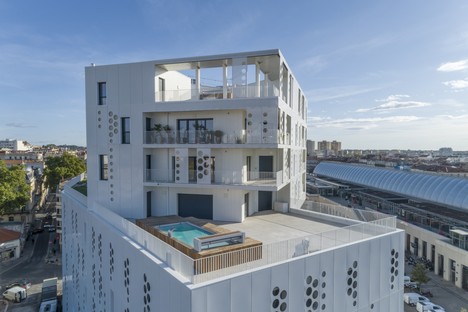 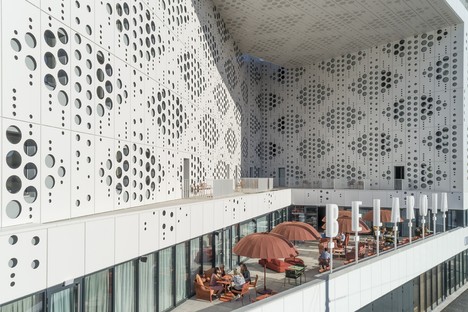 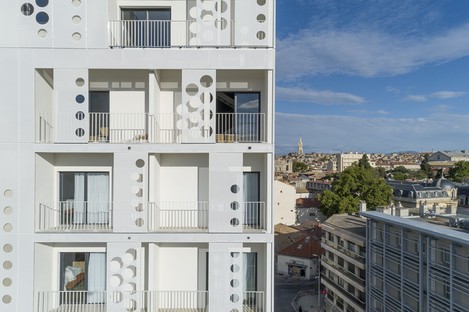 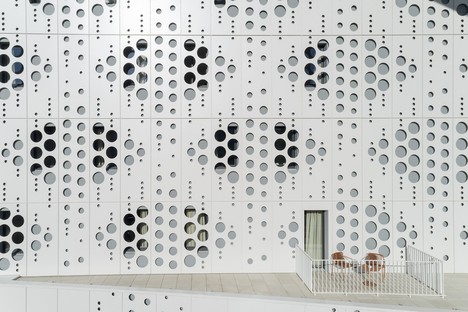 BIG The Museum of the Human Body, Montpellier, France