Architect Giorgia Dennerlein created the interior design for the new lounge area and suites at Manfredi Fine Hotel Collection, a five-star luxury hotel located in sumptuous Palazzo Manfredi, in one of Rome’s most prestigious neighbourhoods. The building, renovated to plans by architect Matteo Thun, was constructed over the ruins of the Ludus Magnus, with a view of the Colosseum. Near Rome’s Ludus Magnus, the famous gymnasium where Roman gladiators who performed at events in the nearby Colosseum used to train, architect Matteo Thun planned the renovation of a sumptuous building: Palazzo Manfredi, an early twentieth-century construction that Thun has transformed with a rationalist design, replacing the original red plaster with a strictly regular grid of perpendicular travertine blocks, defining and adding rhythm to the walls while framing the floor-to-ceiling windows.
The project was developed in partnership with architect Giorgia Dennerlain, who took care of the interior design in the Grand View Suites Ludus Magnus and the new outdoor lounge, The Court.
The building’s monumental qualities and prestigious setting were the principal challenge the architects faced, for the hotel building is adjacent to one of the world’s most important and best-known archeological sites, a classic symbol of the city of Rome: the Colosseum. The iconic monument is clearly visible from all the windows in the suites and dominates the panoramic view from the new lounge area, the ideal setting for enjoying the view of the Colosseum. 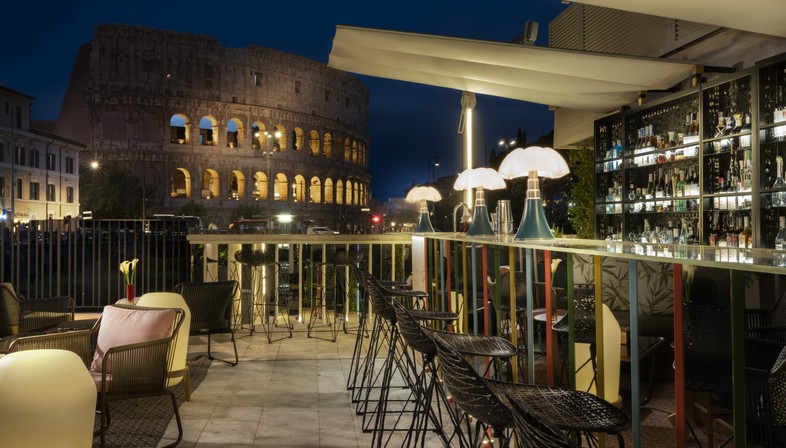 Architect Giorgia Dennerlein designed the bar and lounge areas in The Court, the dramatic new lounge in Palazzo Manfredi. The two spaces mirror one another and flow into each other; the lights and furnishings interact with the space and are strategically arranged to create an evocative space, like the ideal stands in an open-air theatre from which to enjoy panoramic views of the Colosseum and the nearby Ludus Magnus. Like the building’s façade, designed by Matteo Thun, Giorgia Dennerlein’s interior is clad in slabs of travertine, the marble typically used in imperial Rome, creating a material bond with the site’s ancient history. The marble of the 7.5-metre-long bar counter is interrupted in the middle, replaced by diamond-point mirror inserts and coloured strips creating optical effects: a solution that lightens up the solid volume and puts the right emphasis on the use of colour. Colour is characteristically an important factor in Giorgia Dennerlein’s projects, as demonstrated by the combination of different colours and patterns she has chosen for the furnishings, textiles and forms of her interior design. 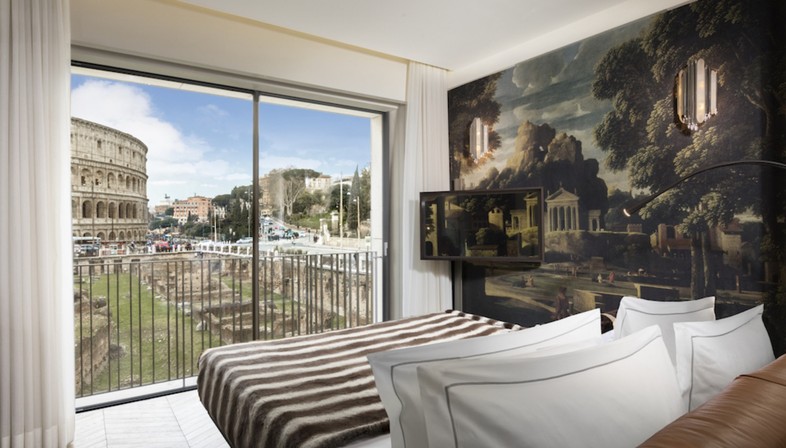 Grand View Suites Ludus Magnus consists of apartments of various different sizes between 45 and 100 square metres which the noble Manfredi family decided to convert into suites for the adjacent Hotel Palazzo Manfredi. Giorgia Dennerlein has designed the suites as large open spaces; the furnishings and a number of carefully studied transparencies differentiate and subdivide areas intended for specific functions, such as the bedroom area or the wellness area with bathtubs and walk-in showers. The architect uses carefully chosen furnishings, finishes and textures to give each suite its own unique identity even while preserving a unified character throughout the building. The walls, for example, bring to mind classical landscapes and themes, creating clear references to the architecture visible through the windows inside the suites. 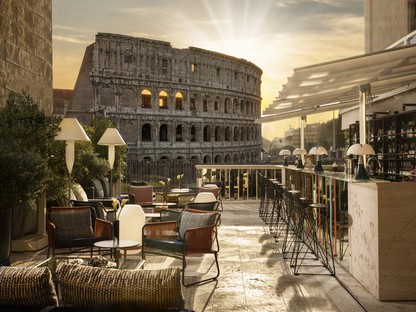 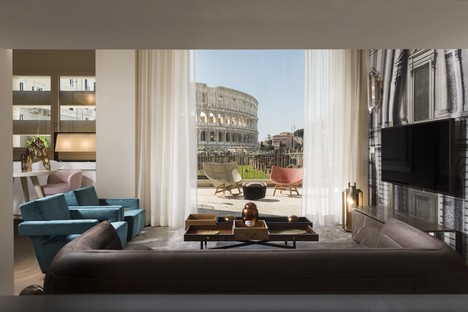 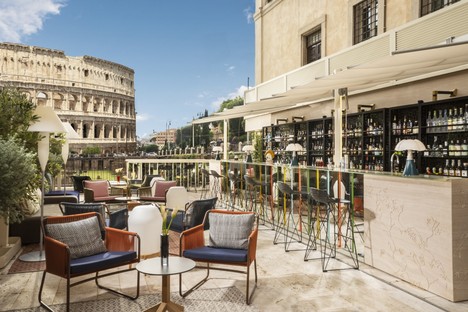 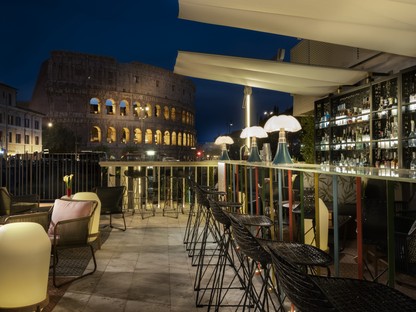 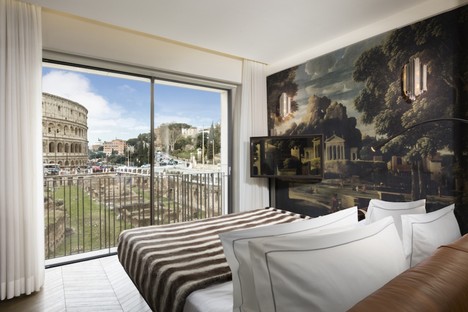 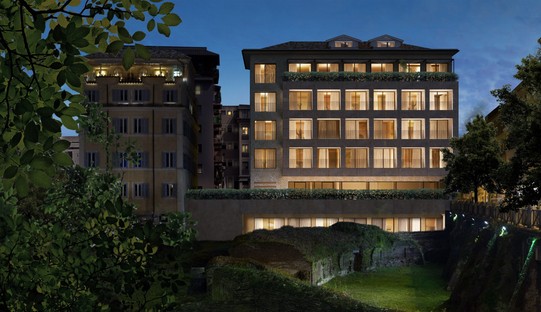 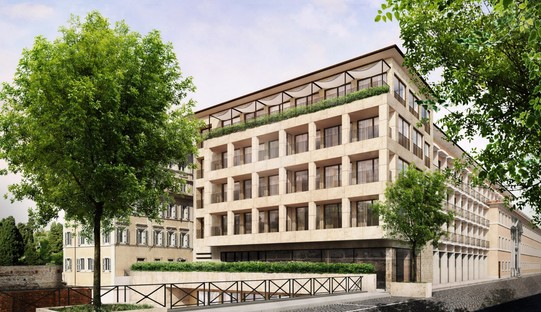 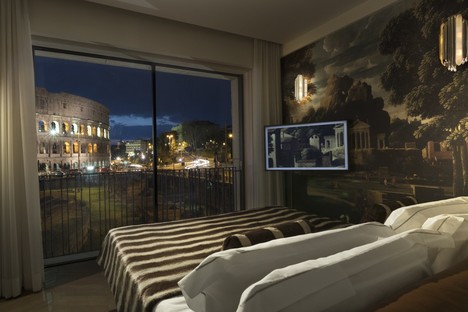 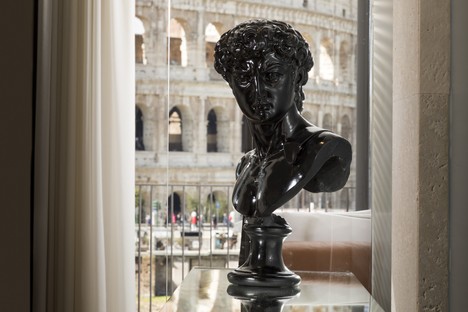 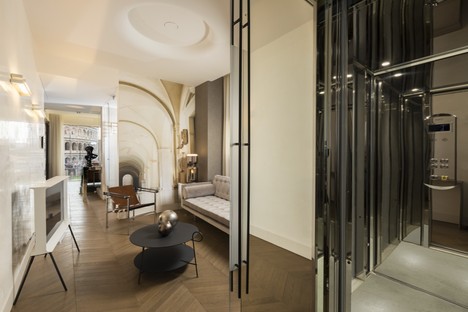 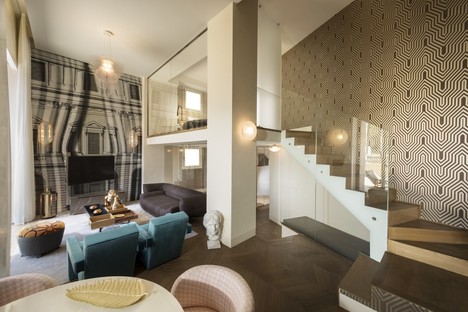 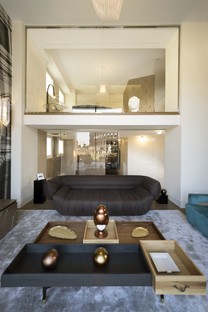 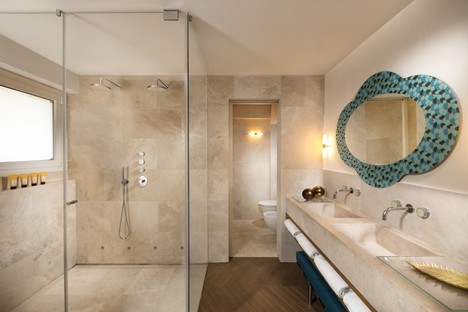 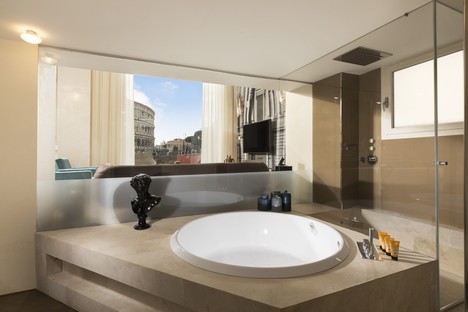 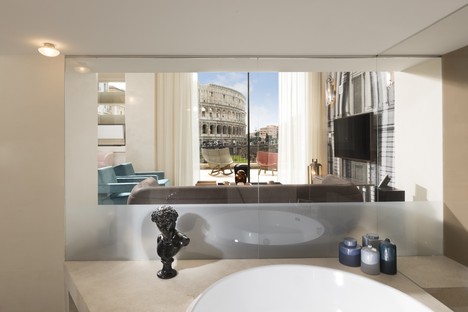 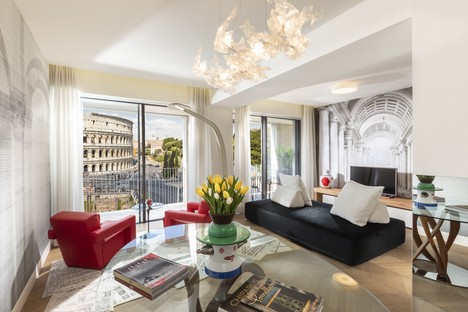 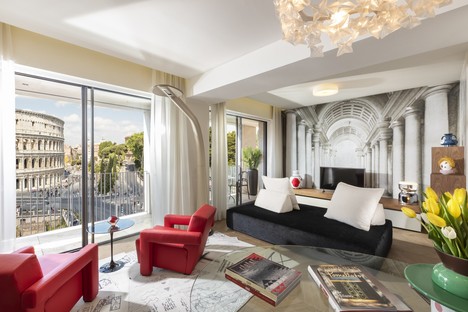 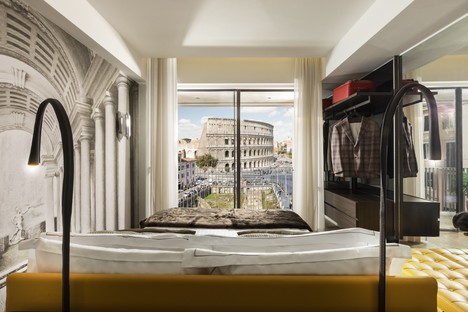 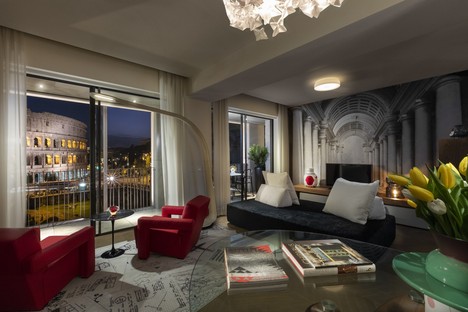