Spanish studio Linazasoro Sanchez has designed a new office and congress centre in Troyes, studying and updating the history of the site in a project that combines the existing context with the new modern look of the city of Troyes. 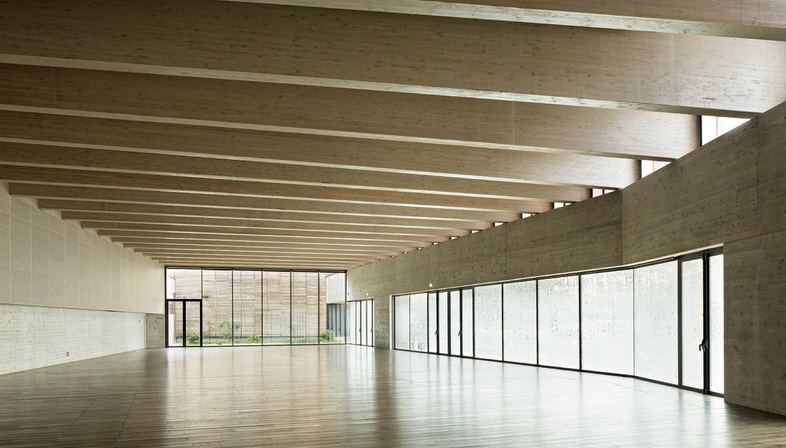 According to architects Linazasoro & Sanchez, who designed the new office and congress centre in Troyes, the city centre has been subjected to a number of upheavals since the French Revolution that have changed its layout, destroying evidence of its medieval origins in some places. This is the case of the series of the primarily residential buildings that stood on the lot where the office and congress centre now stands: Gothic homes had sadly been knocked down and replaced with public buildings.
José Ignacio Linazasoro and Ricardo Sánchez, in partnership with Thienot-Ballan-Zulaica Architectes, constructed a centre that fits into a stratified context: timber frame homes with masonry infill are combined with nineteenth-century public buildings with mansard roofs, seeking to locate a vocabulary that sums up their forms and composition with the goal of creating something that the community can identify with on a historical level. Created as an expansion of the Préfecture de l’Aube complex, the congress centre stands on a narrow lot between Place de la Libération and Rue Charles Gros, and treats its surroundings in the form in which they have come down to us as contributing to the definition of an architectural scale that contemplates both monumental and small-scale actions. The comparison is with austere, majestic Gothic churches such as the nearby Basilique Saint-Urbain on one hand and with single residential buildings on the other: lower, more modest, standing side-by-side in a densely packed, indistinct weave. And so Linazasoro & Sanchez’s project includes large-scale elements such as an 800-seat auditorium, encased in a concrete volume with south-facing floor-to-ceiling windows, a multi-purpose hall opening directly onto Place de la Libération and a block containing the council hall which juts out over Rue Charles Gros, recalling the overhanging rooms of medieval timber homes. But the large volumes are equally broken up, their façades interrupted by timber frames, so that the visual impact of the concrete structure above is broken down into smaller elements treated like separate spaces, the offices inside the building, joined together in the complex. This composition is based on an analysis of the centre’s current and historic context, which, in the architects’ words, is inspired by the method and solutions of German and Italian post-war architects such as Rudolf Schwarz and Franco Albini.
The layout of the complex is in turn fragmentary, composed of separate but connected parts, as if to imitate the layout of a historic city centre: the arcade over the entrance on Place de la Libération which connects the new wing to the Prefecture building on the upper level, the street that narrows to join Rue Gros with the auditorium and the inner courtyard, the foyer on multiple levels leading into the auditorium, and so on.
The unity and monumental scale of the concrete are the elements used to give the place importance, while the delicate fragmentation characteristic of timber recalls the minute, historic dimension of dwelling-places. Timber and concrete continue on the inside of the building, as in the multi-purpose hall, where a solid wood roof is supported by concrete arcades. The resulting formal solution is perfectly contemporary, containing no obvious homages or references. 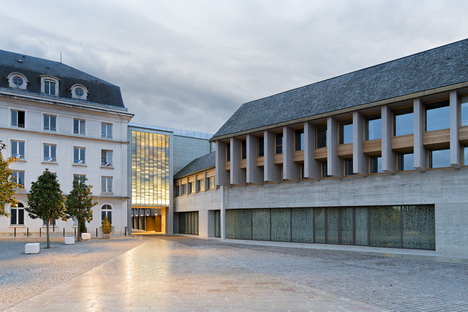 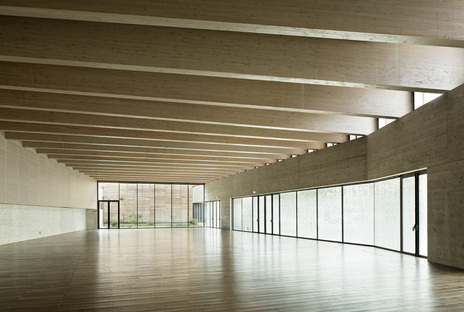 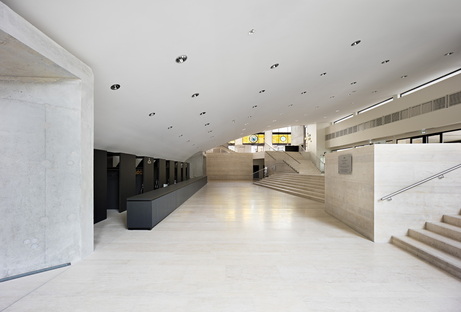 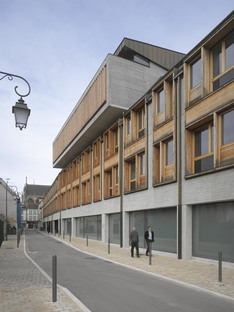 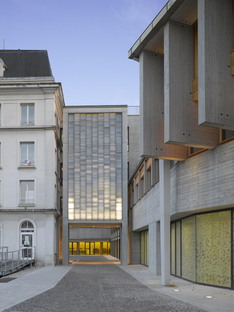 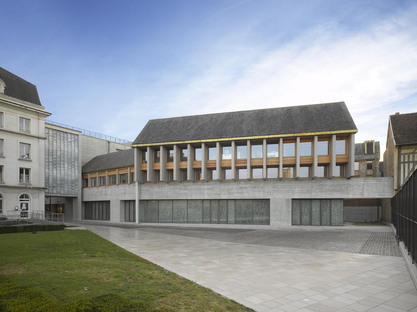 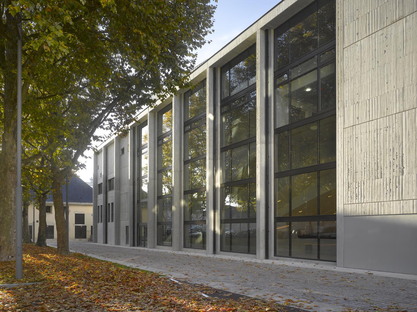 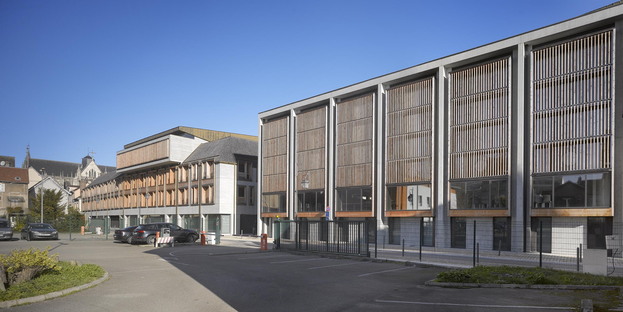 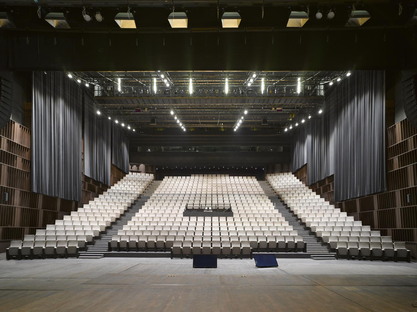 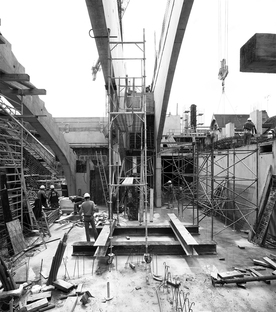 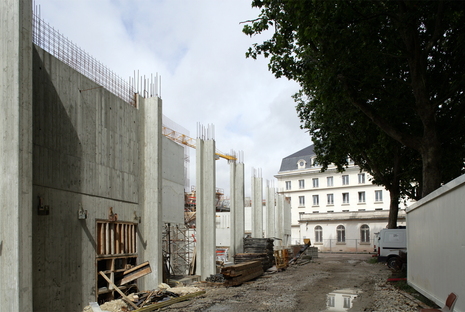 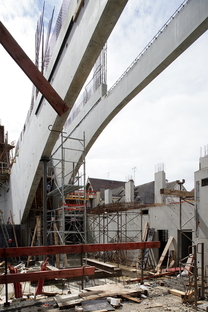 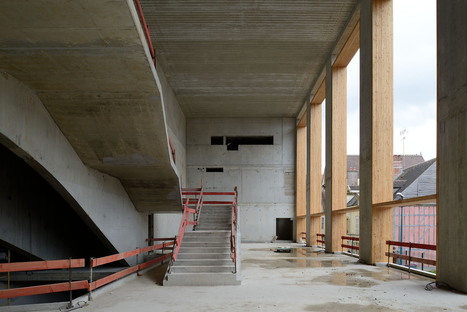 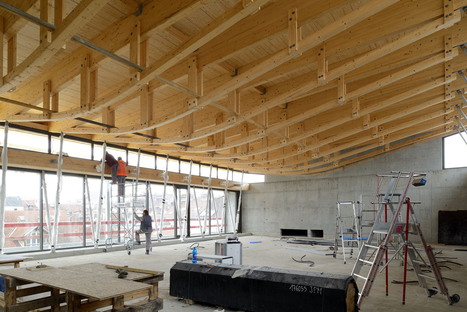 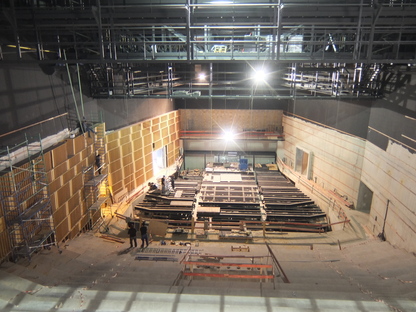 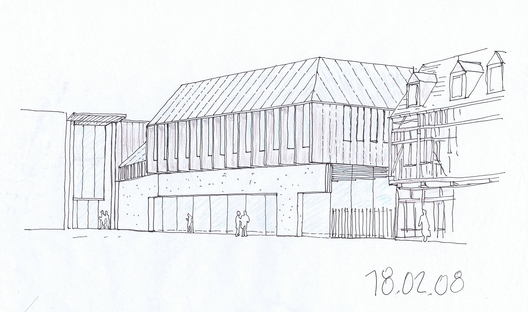 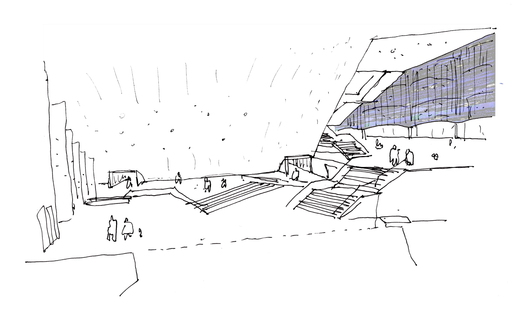 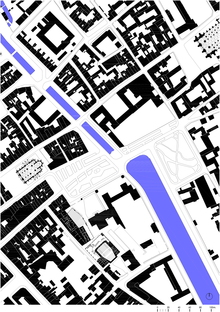 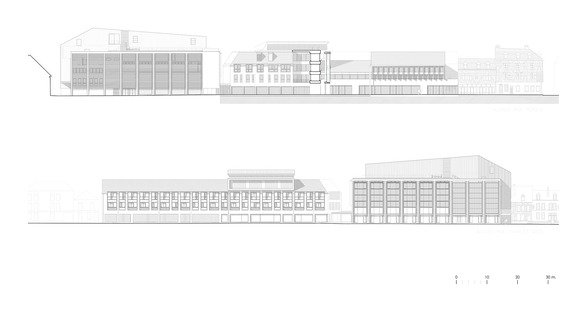 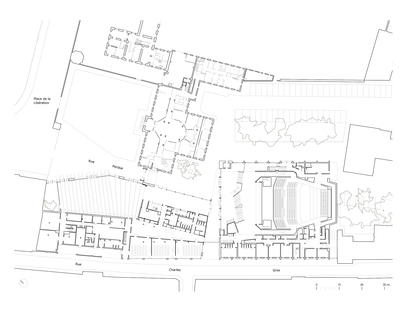