Li Xiaodong and the school on the bridge

Li Xiaodong has created an ambitious infrastructure for the Chinese community of Pinghe: a bridge linking two castles on opposite sides of a river, joining the past with the future, a passageway with an educational function producing an innovative combination of the functional and the symbolic. 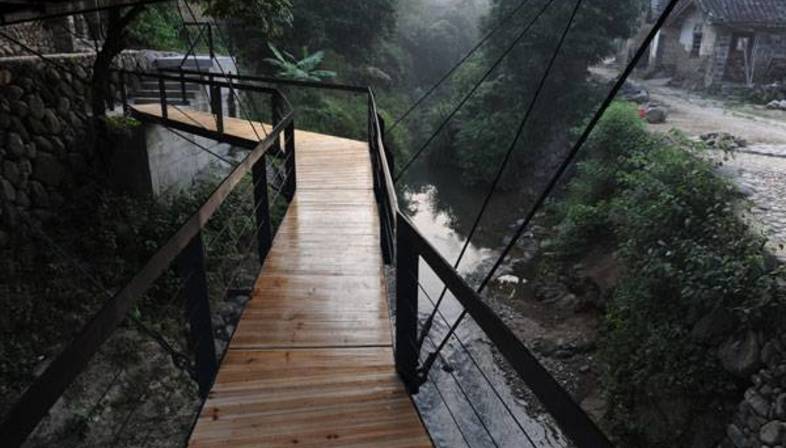 The plan for the school bridge in Pinghe, in the Chinese Province of Fujian, is part of a complex community revitalisation project including renovation of the two castles that overlook the city centre and construction of service facilities for the young. In Li Xiaodong’s project, the bridge is a symbolic element which not only physically connects the two parts of the town divided by the creek but has the additional purpose of making children’s education a central focus in the town in order to ferry the community into the future in the best possible way.

Commissioned by the town authorities, the infrastructure was to link two monuments representing local history, two 17th century castles situated on either side of the river. The province of Fujian has more than two thousand castles of this kind, now Unesco World Heritage Sites. Uninhabited since the early twentieth century and now in very poor condition, the castles are still considered the heart of the village, and are to be converted into hotels to give them a new role to play in the town. Construction of two classrooms for children aged six to eight inspired the idea of combining the project with a pedestrian bridge which, when crossed, brings each person into visual, auditory and perceptive contact with the children’s activities. Much more than an ordinary infrastructure, the project permits two ways of crossing and has four access point, creating a direct walkway from one bank to another and then, at a slightly higher elevation, a second covered path which is also a place of entertainment and education. The lower walkway zig-zags to allow people to enjoy the beauty of the landscape. Two steel tie rods anchor it to the upper block containing two classrooms on steps, across from each other, with a corridor running alongside them and linked by a small central room which is a place for people to stop, rising into a raised plaza. Cement platforms support a steel and glass structure with wooden sunshade slats all along the entire horizontal face of the bridge/school. The light screening that attenuates the light and reduces perception of the inside from outside, protecting the children’s feeling of cosiness, does not prevent them from seeing the landscape, which is integrated into the concept of the architecture. Wood, serving a dual function as flooring and covering for the facade, is the material filling the perimeter traced by the metal skeleton.

The bare architecture is enriched with definition of many details: the southern wall of the classroom, which, unlike the others, is made up of eight elements anchored to the ground by a central pin along a track, which can turn 45 degrees to open up the room so it can be seen from outside. Or like the tunnel and slide for the children, made entirely out of metal and built into the staircase at the exit: it is not obviously a toy, but is a harmonious part of the design of the stairway, leaving it up to the children to discover and use it. 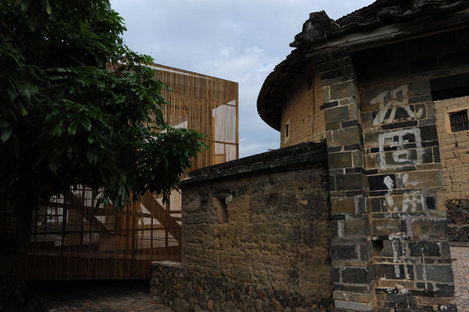 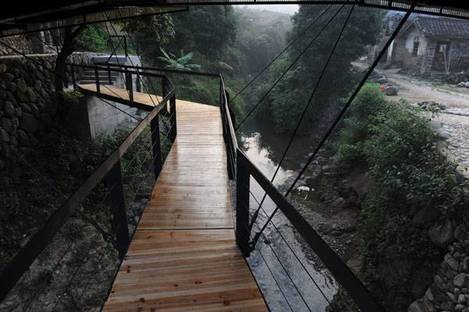 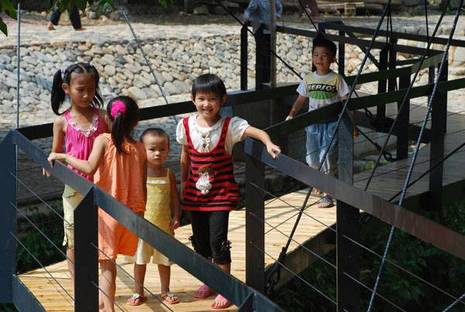 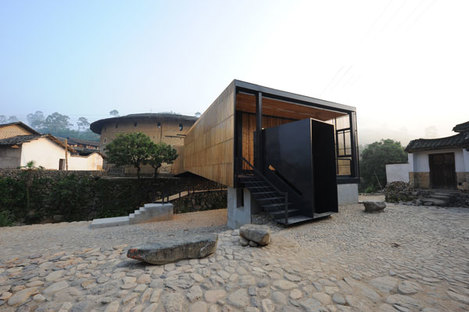 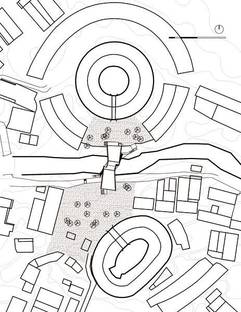 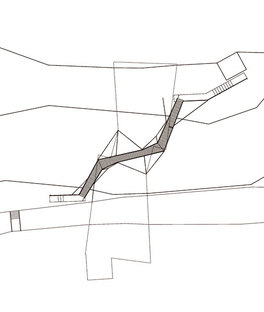 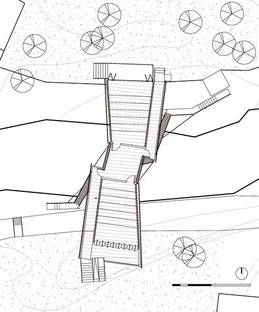 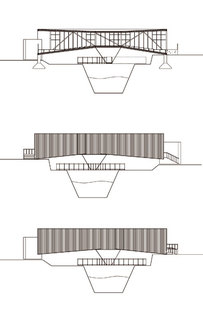 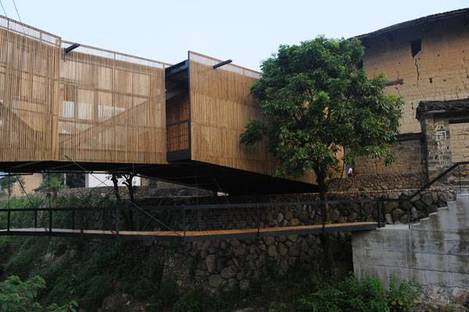 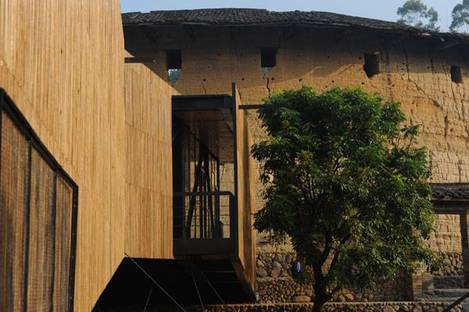 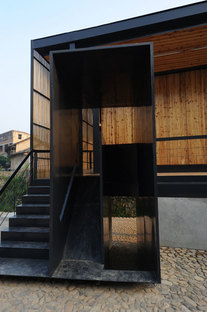 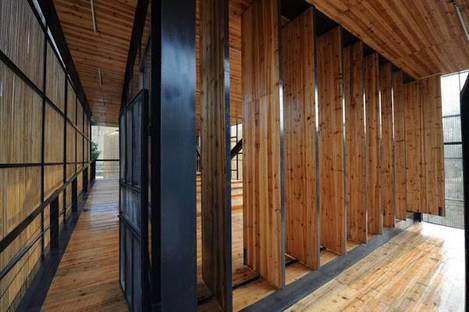 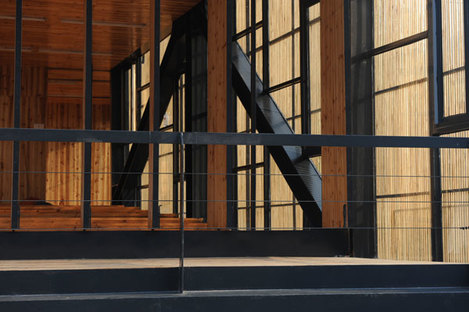 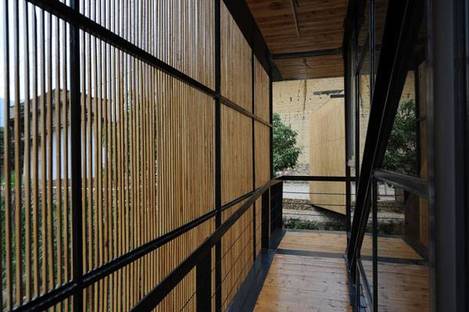 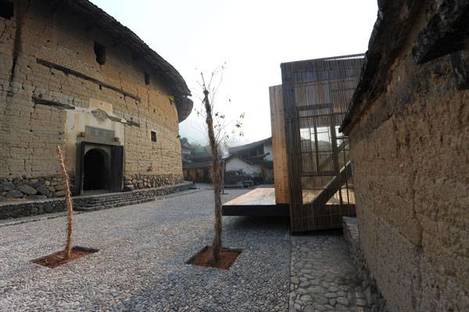 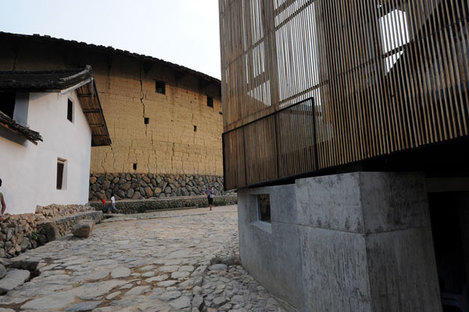