The plan for the new Victor Jara cultural centre in Soignies, Belgium, reconciles the demands of architecture with those of urban planning to create a scene that adds life to the city centre. Use of combinations of materials such as local stone cladding with glass and creation of a form that follows the lay of the land underlines the building’s context and underlines its role in the community. 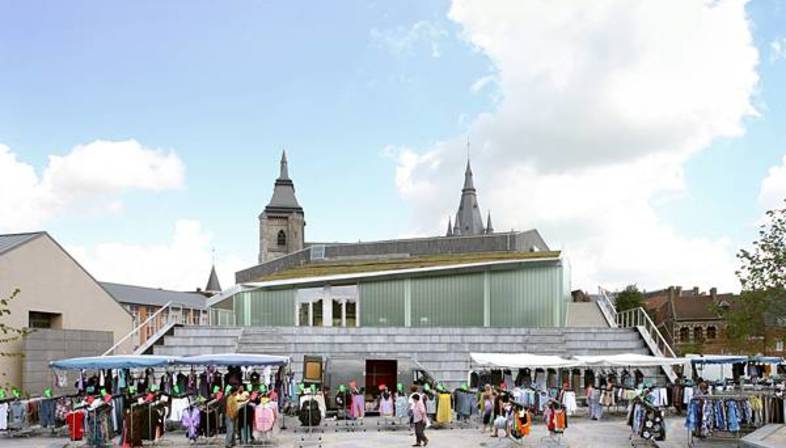 Starting with an architectural project to revitalise a whole neighbourhood. This is the outstanding commitment undertaken by the town of Soignies, which held a competition in 2005 to design the new Victor Jara cultural centre, which the municipality founded after receiving a legacy in 1971 with the specification that it must be used to build an arts centre to benefit the town. The community’s vocation was accepted by L’Escaut architectural studios, which presented a project including not only a 600 seat theatre but, reducing the building’s size and concealing the facade behind a flight of steps in Van Zeeland Square, also creates an outdoor “stage” for hosting events in the town’s thriving cultural life and folk traditions.
The multifunctional nature of the project translated the client’s mission to create space for a variety of different art forms, from theatre to performance art, from exhibitions to concerts, from entertainment and fun to education, with the full involvement of the community to create a symbolic building in which the show is not only contained inside and reserved for a cultivated elite that can afford to pay for tickets, but extends outside, where the performances can relate to the urban landscape around them and the way it changes every day.
The site is in the city’s old centre, near the building that is still considered the symbol of the town: a 12th century collegiate church, and so the new construction does not attempt to dialogue with its rising spires on their own level, but is designed to conceal its presence behind steps as wide as the whole square, which is a trampoline leading the eyes beyond, to the spires and the sky. At the top of the steps, clearly inspired by an amphitheatre with the square as its stage, is one of the entrances, hidden in a translucent pane of glass made up of the units characterising the side walls, breaking up the monolithic building created with cladding of grey-blue local stone. The eastern and western walls also deny their function as facades, for the design of the routes makes them into a circuit of stairways leading into the square from the collegiate church to the north.
Its abnegation reveals the building as a place that is intended to be used, not seen, a place to climb onto and from which to observe the surroundings from different points of view, as the building’s form submits to its surroundings and pays homage to them, like the stairway which starts at the old underground river bed, like the volume of the eastern wall jutting out over the courtyard, or like the western wall which, with its motion, welcomes the square fitted out by artist Domitienne Cuvelier with furnishings that invite people to stop and use it. 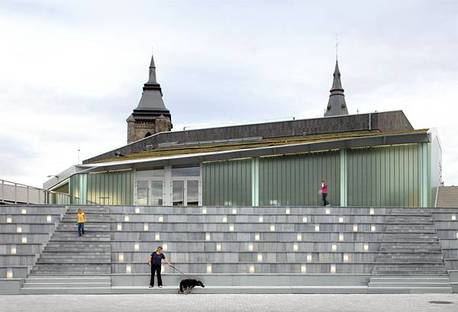 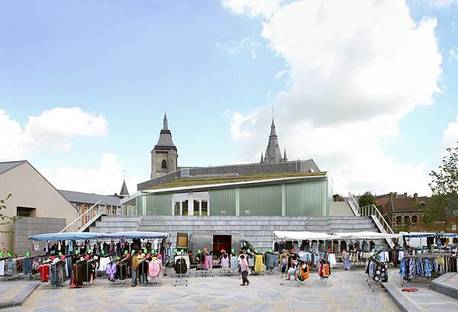 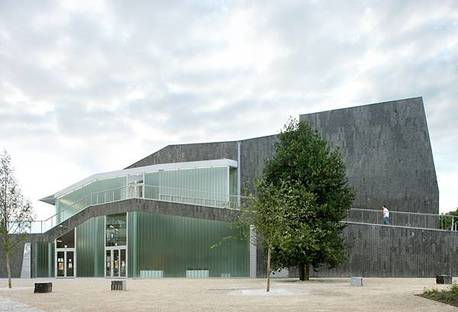 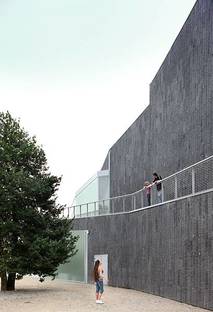 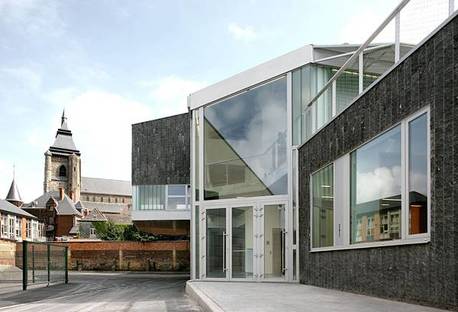 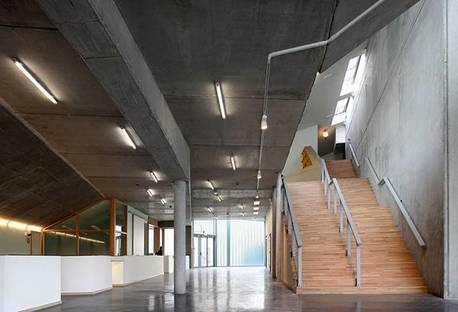 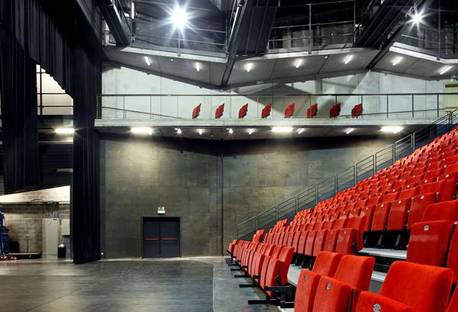 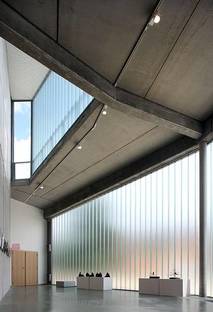 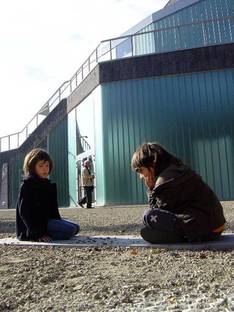 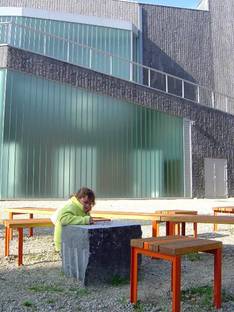 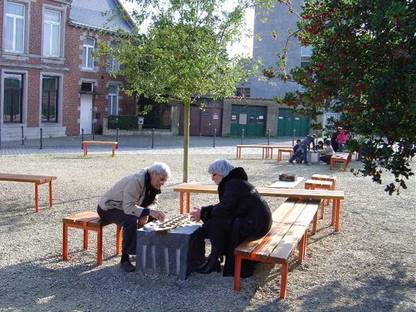 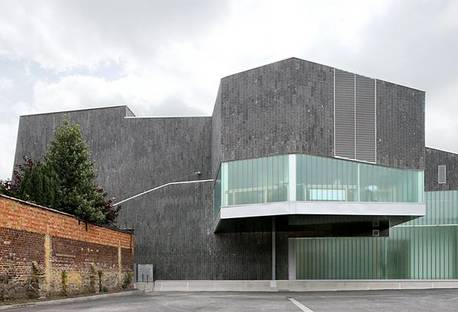 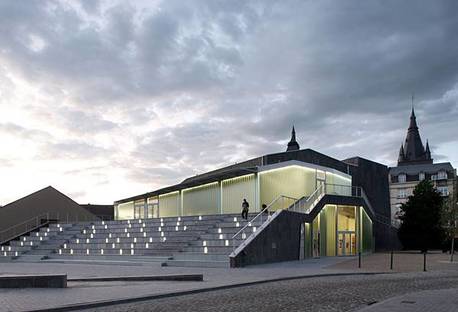 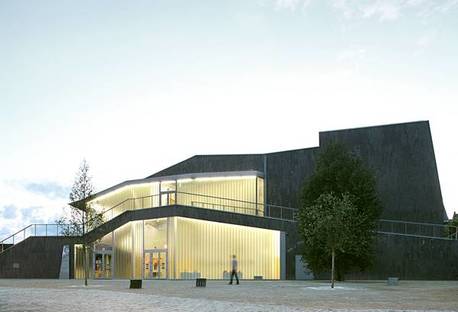 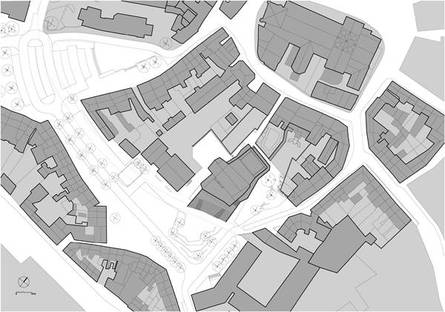 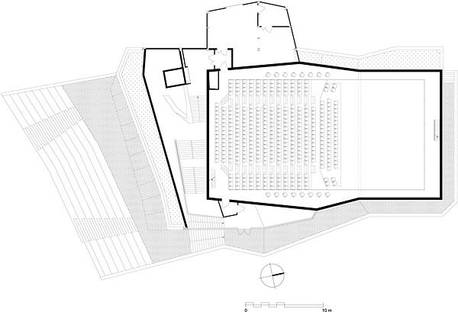 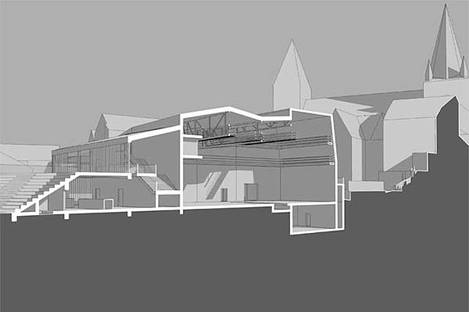 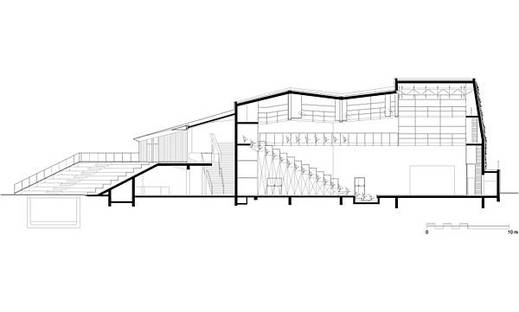