Architecture in countertendency, the Outrial house near Warsaw looks to the past and pays an explicit tribute to Le Corbusier, offering his compositional and figurative principles once again in a home with a contemporary spirit. 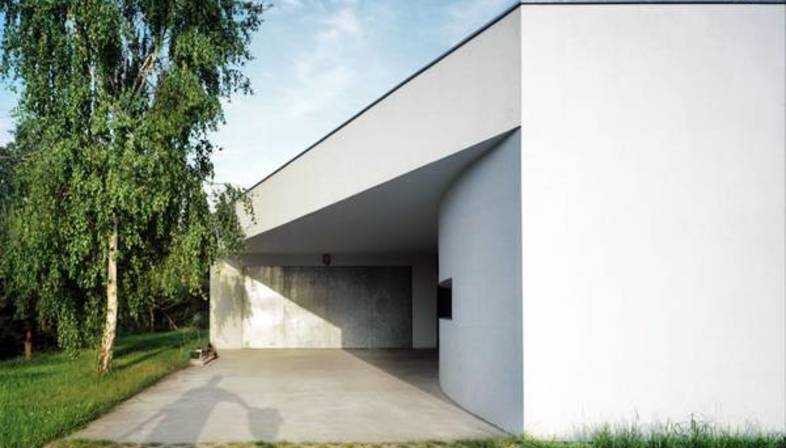 In contrast with the predominant trend in thought of current architecture, which aims to display its soul to the outside world and features distinctive surfaces that impose themselves on their setting, the Outrial home by KWK Proms, Robert Konieczny’s Polish studio, is introverted architecture, where every compositional element is placed to define and improve internal fruition and where the natural landscape blends in to complete this function.
Situated in a neighborhood of Warsaw, it is the home of a musician on a plot of land in the middle of the forest with, on three sides, a view of countryside and vegetation and complete freedom to interact with its setting, without boundaries or problems of privacy. The dialogue with the landscape developed by the designer can be seen not in the building's elimination of barriers or in its simple design as a transparent home, but in the choice of privacy that involves nature blending with the interior of the architecture, rather than the contrary. This is a lesson of the Modern Movement, which this project is clearly inspired by, and once this analogy is revealed we also discover a range of tributes to Le Corbusier’s many buildings. The natural landscape that the Outrial home is part of provides a path to vision and fruition of the design, whose white plastered brick looks for the metaphysical monolith effect of the Ville Savoye.
The roof garden, which cloaks the whole house in green, giving the impression that it has been dug out of the ground, is in reality nature constructed like the roof garden of Poissy. The close relationship between nature and artefact, between the exterior and the interior, is underlined by the stairs which, as in Poissy, lead to the roof from the inside of the home. A circular connection, a spiral staircase, leads once again from the living room to the roof and the summit, with the most panoramic viewpoint of the house.
Inside the rectangular plan the curve of the stairs to the roof garden continues down to the main entrance and dictates the division of the home into day and night areas. The break in the terrain, from which the stairs originate, is also the location for a glass wall that illuminates the living room , whose non-transparent continuation has rectangular openings forming a door from floor to ceiling and strip windows. The geometry of the plan does not impose modularity on the facades, which are all different. The three entrances to the living room on three sides mean that there is no main facade, but that the architecture should be contemplated as a whole. 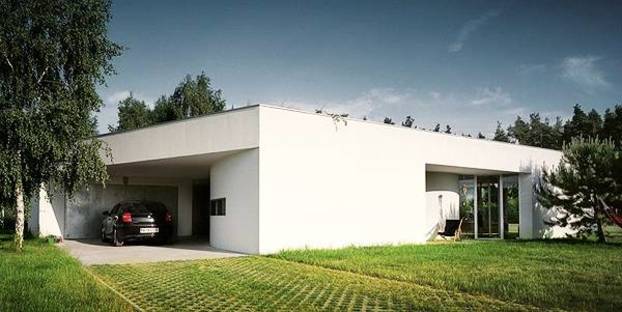 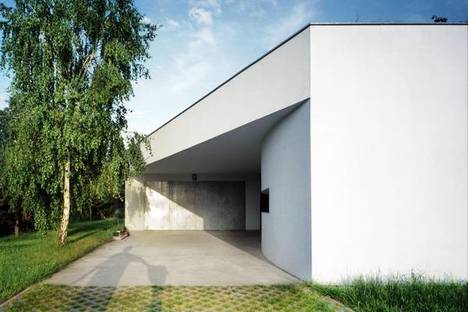 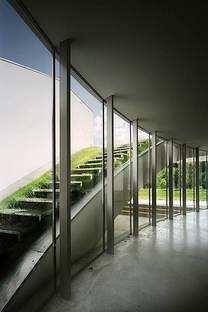 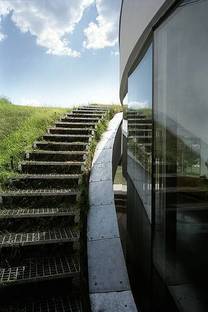 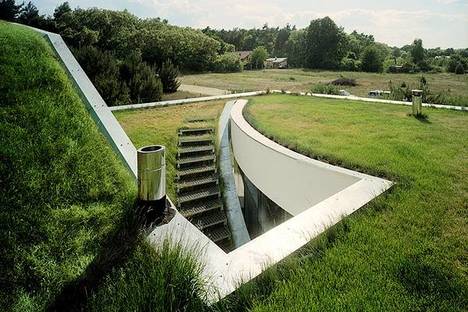 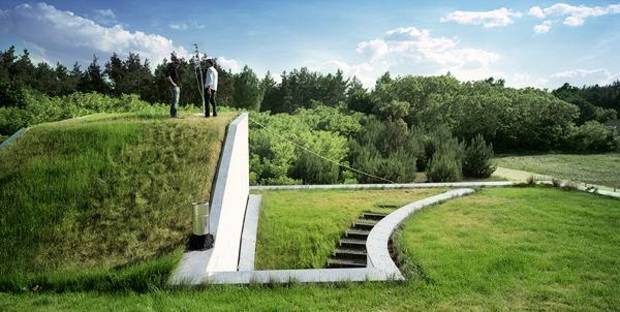 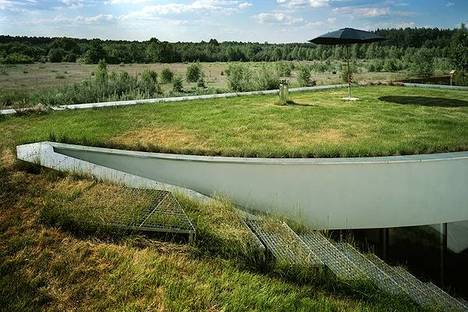 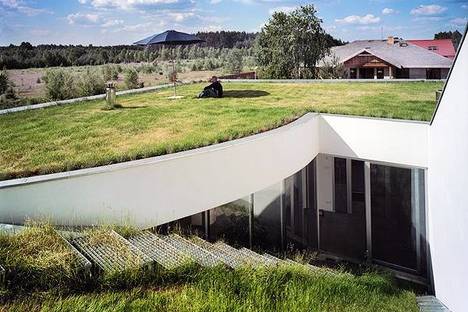 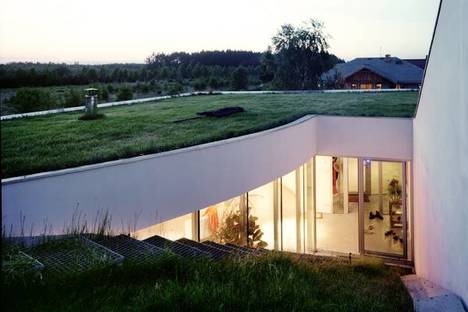 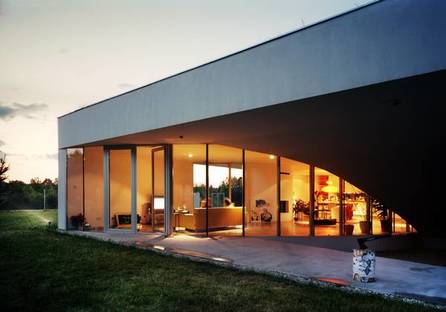 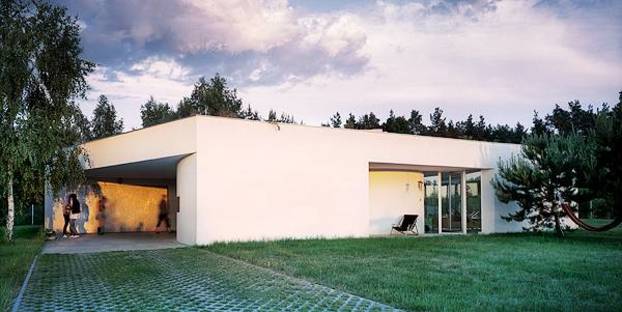 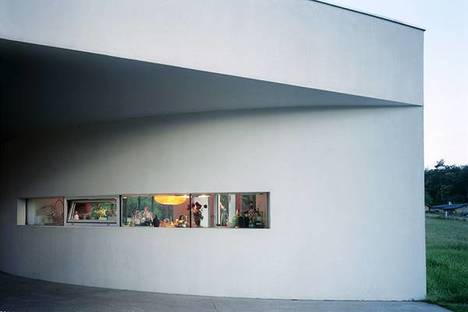 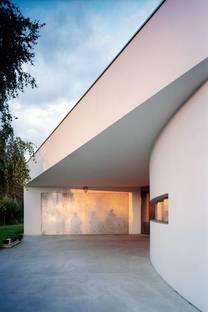 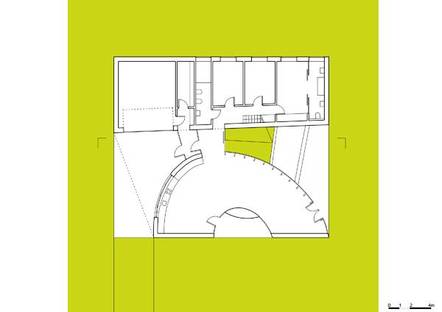 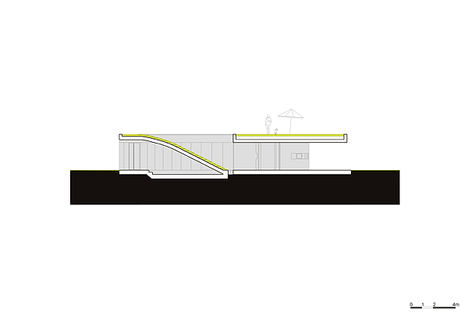