The new sports and recreation facility in Saint-Cloud, on the outskirts of Paris, designed by Christophe Ouhayoun & Nicolas Ziesel (Koz) makes a building for children into a bold landmark. In this toy-building, the colours of the glass in the façade reflect the colours of the spaces inside, and the different colours help children find their way around. 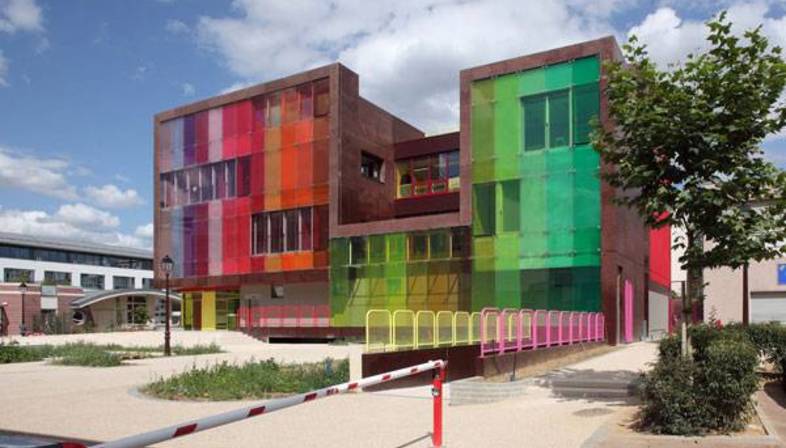 Building for children has an educational purpose that gives it great responsibility, not only towards the children who use it but towards the neighbourhood in which it stands. Demonstrating impressive sensitivity in relation to such a complex universal theme, the city authorities in Saint-Cloud, on the outskirts of Paris, announced a competition in 2004 for construction of a sports and recreation facility, choosing a highly expressive design with the intention of creating an urban landmark in an undistinguished neighbourhood of ordinary residential buildings. The building, designed by the French studio Koz, stands on the edge of a plaza and garden open to the public as well as to the centre’s users, for the client wished to integrate the children’s activities into the neighbourhood.
The compact image created with prefabricated cement panels is dematerialised by the rhythm of the facade infill of coloured and translucent glass units. While the building’s outer wrapper has a unitary, monochrome appearance, the colours of the glass are designed to permit identification of different spaces within the building from the outside. The different colours in the facade units, red, yellow and green, make the building look as if children had painted it in stripes, colouring outside the lines and up to the railings identifying the entrances: the railings are red where the glass is red, yellow where it is yellow.
Interpretation of this toy-building is accentuated by the hollow in its centre, which lets in plenty of natural light inside thanks to the addition of glass elements and contains a ramp leading from the second level to the outdoor terrace. Many of the interior furnishings encourage playful interaction: wall climbing fittings are used as decorative elements on a whole wall of the gym; the ramps to the terrace have a yellow floor with a wave design like a beach, identifying them not as ordinary passageways but as play areas; all the spaces are bigger than the regulations require to give the children plenty of room to run, play and move around in the greatest possible freedom.Compositional choices privileging aggregation of parts without any clear separations are underlined by the message conveyed by the colours: while the presence of a colour in each sector of the building identifies the places available for welcoming the children and group together all the activities in their imaginations, use of different colours in different spaces provides a means of spatial orientation. In addition to the well-known expressive stimuli created by colours in children, the colours are used to help them understand the building’s architecture: red glass on the outside corresponds to an area with red walls, making it easy for children to find their way around and indicate the activities that they have participated in during the day even from outside the building.Learning from the history of school buildings and transitional spaces, Koz distributes the spaces on the basis of fluid routes so that users in any room have many different views of the other rooms and of the outside, encouraging them to understand their surroundings, both near and far way.
The relationship with the landscape is reciprocal, in that while children can observe the world outside, the neighbourhood can perceive the activities going on inside the building through the translucent glass; and when the children go home to sleep at night, the colours and lights inside continue to remind them that they will play again the next day.
by Mara Corradi 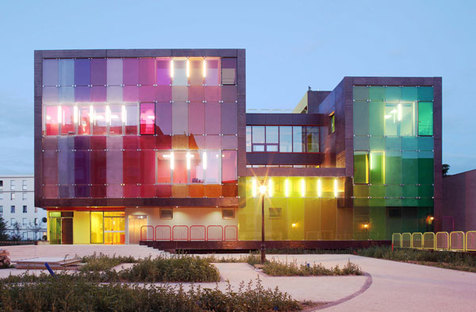 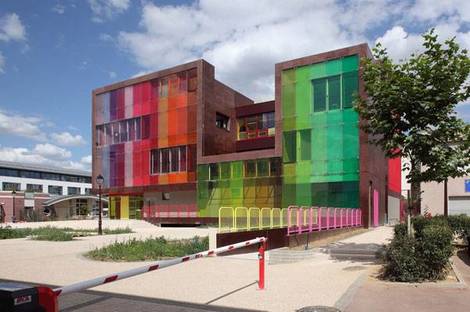 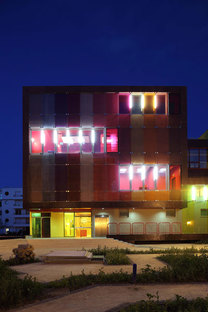 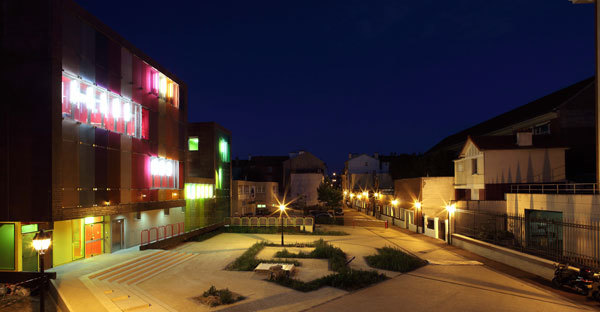 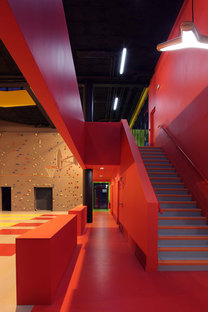 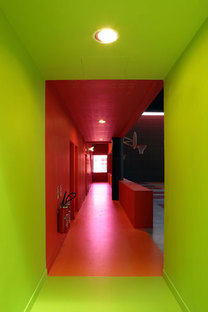 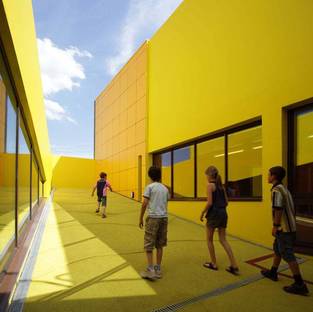 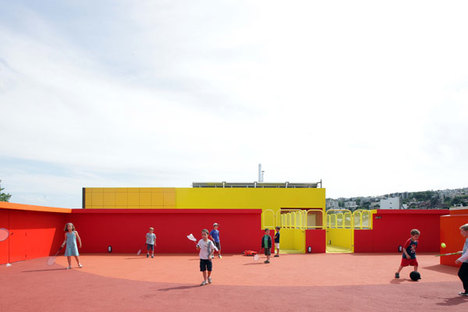