The Living-garden house in Katowice, Poland, is the first project by Robert Konieczny – KWK Promes to focus on the theme of integration of dwelling-place and nature. Robert Konieczny studies the co-penetration of greenery into the home as a key element in residential architecture. 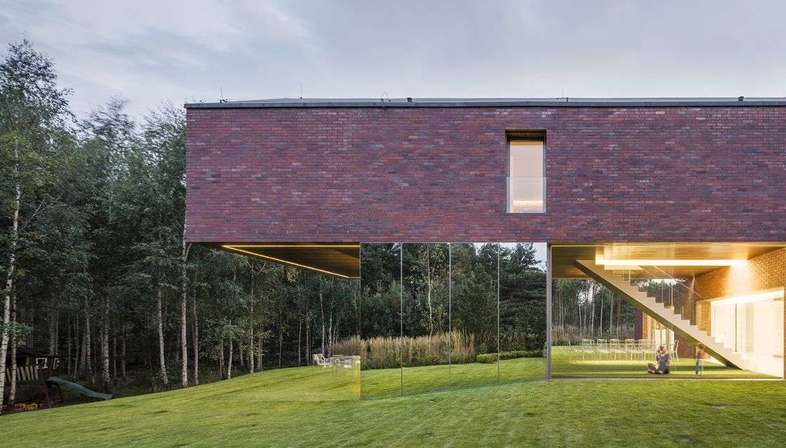 The first project to be built as part of a wider-ranging study, the living-garden house in Katowice, Poland is a study exploring the synchronism of the built and the natural by Robert Konieczny – KWK Promes.
Robert Konieczny had already investigated the boundaries between home and garden in his Outrial House project in Warsaw, in which he was guided by the principles of Le Corbusier’s Rationalism. In the Living-garden House we may see a new international style emerging as the idiom of the moment, translated into large minimal spaces overlooking the greenery through vast windows. In Konieczny’s philosophy, this spatial composition responds to the needs of today’s way of living, lacking integration with nature, which is normally treated as part of the background rather than an essential part of the home and people’s way of life.

The principle inspiring KWK Promes’s study is that of complete symbiosis, obtained by reflecting on the needs linked with various different functions and therefore spaces in the home. If we observe the day/night dichotomy from the point of view of design for living, while the spaces in which we rest require isolation, privacy and darkness, the places where we perform our physical and mental activities during the day require sunshine and nature as sources of energy and wellness. In the Katowice project the architect takes this universal principle beyond simple rules of sunlight and darkness, designing a living area which has no clear boundaries with the outdoors, in which the garden surrounding the home physically enters the indoor space to become the living room floor: in short, the living room becomes a living-garden.

The design of the whole home revolves around this living-garden, which in this specific case recalls the Polish familok, the typical late 19th century home of the miners of Slesia, with its red brick walls and big gabled roof. Reflection on the quantity of light and interaction with the natural landscape led the architect to design a large closed volume facing the road at ground level, identifying the boundary between private and public space, and a second volume the same size above it, oriented perpendicularly to it and overhanging the garden. The volume underneath this suspended shape is the living-garden, whose walls, partly covered with reflective material and partly transparent, amplify the illusion that the garden continues into the home. With a grass floor (artificial grass at the moment, but it will one day be real) mirroring the lawn and the trees around it, this space does away with all boundaries, becoming the ideological and functional fulcrum of the home. Furnished with a big table, also transparent, and a home theatre, it is transformed from a place of passage to an important part of the house at various times of the day. An open staircase cuts the space in half, rising to the upper level, where white surfaces, brick walls and panes of glass clearly reflect the international style. 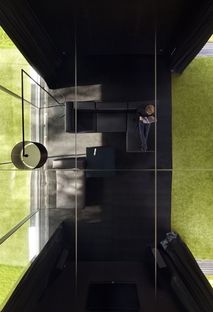 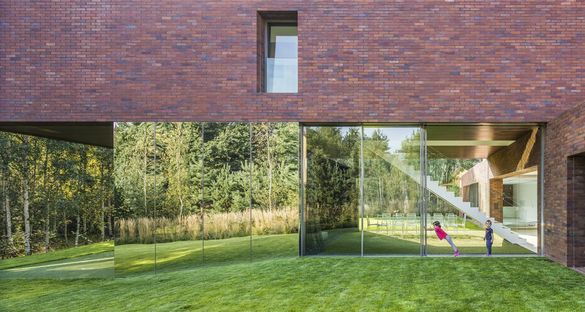 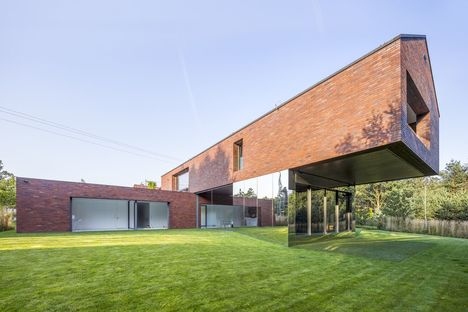 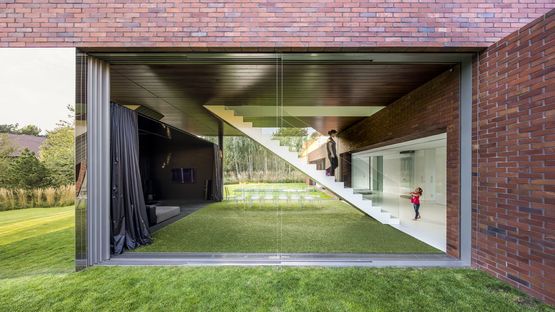 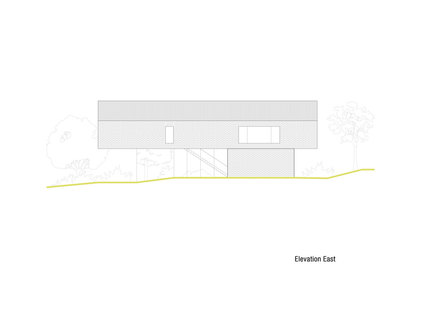 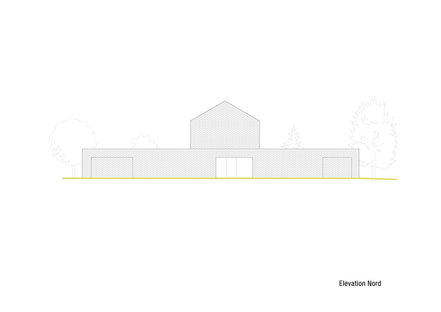 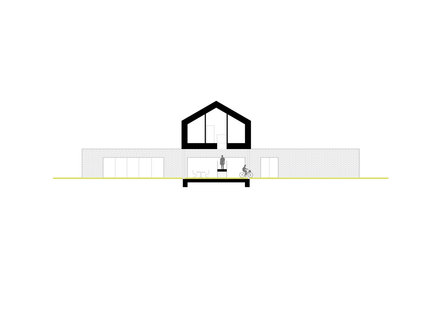 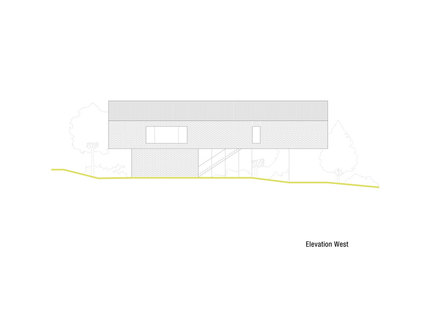 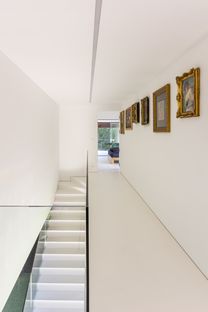 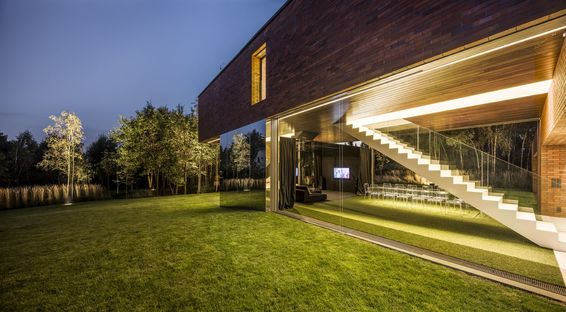 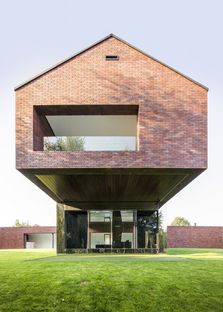 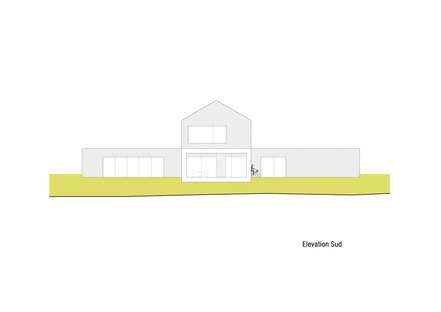 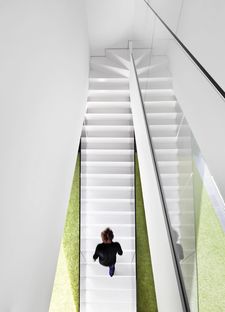 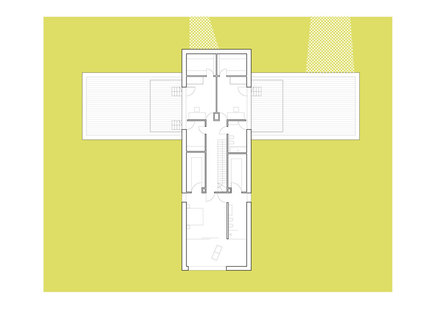 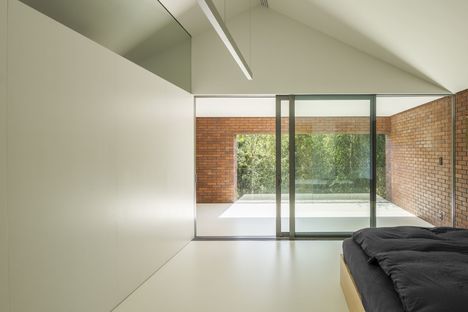 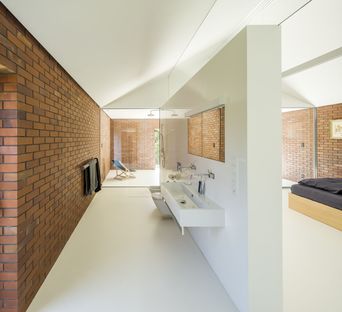 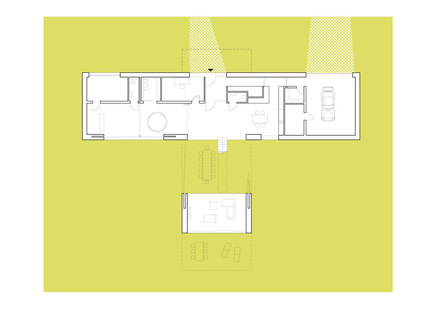 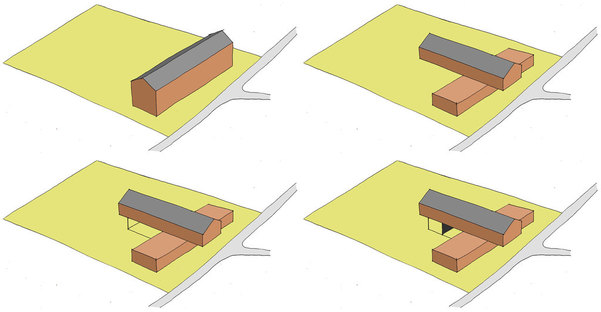