José Adrião has converted a Fado singer’s house in the Mouraria in Lisbon into a bar and restaurant where Fado is sung. Casa da Severa, an old apartment building on 4 floors, maintains the same outer volume, while the interiors have been demolished to form a single open space for the restaurant. 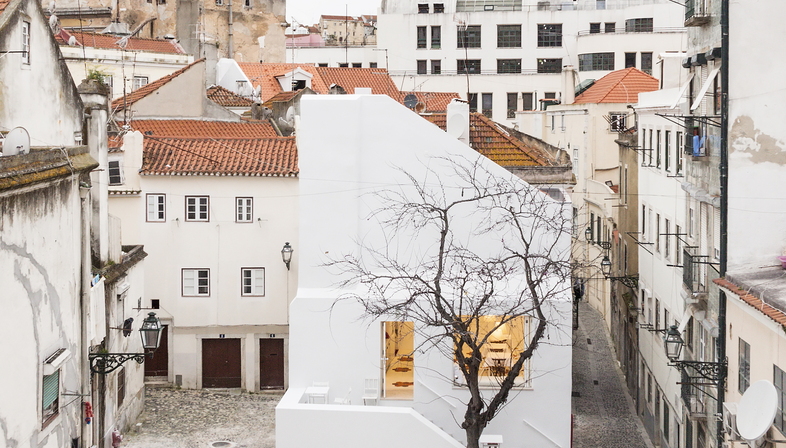 
José Adrião displays great sensitivity in his project in Lisbon’s Mouraria district, converting the old Casa da Severa into a bar and restaurant where Fado is sung, operated by the Museu do Fado in honour of singer Maria Severa. To reach Largo da Severa, you have to pass the chapel of Nossa Senhora da Saúde and continue along Rua da Mouraria as far as Rua Capelão, in a very closely-built district. Largo da Severa opens up suddenly, with Casa da Severa on one side, extending out into the square to become its visual and functional focus. The building originally had three floors plus an attic, divided into six tiny apartments that had fallen into decay, with inadequate sanitary facilities and structural problems. The building’s shape, its position in relation to the public square and its history inspired José Adrião to preserve, renovate and adapt the outer walls of the building while demolishing the walls inside and building new levels to adapt the construction for use as a restaurant.

The main façade of the building still maintains its original design, though the volumes have changed: the emerging part rising up to the roof has been preserved, but set back from the street to make way for construction of a masonry outdoor staircase leading from street level to the restaurant entrance on the first floor. The staircase provides a direct connection between the restaurant interior and the square, underlined by a large low window at restaurant level, which is also used as a public seat, so that the square becomes a part of the room.
Inside, the original subdivision into floors, which no longer exists, is revealed by a stringcourse and a different wall colour from the traditional white, which has been maintained on the exterior and in the lower restaurant level. The southern wall preserves the original windows, now renovated, filling the single space with light: 24 square metres, with a very open feel thanks to a ceiling up to 6 and a half metres high. The round window on the southern wall confirms José Adrião’s love of unexpected little openings joining spaces together and letting in light.

The lower level, containing the kitchens, toilets, technical premises and storage area, has been treated in a completely different way, colouring all the surfaces bright red to match the fabrics in the restaurant and the floor decorated with hexagonal red ceramic tiles. On summer evenings, the architect says, the restaurant puts tables outside and Fado can be sung on the staircase, making it a neighbourhood event. 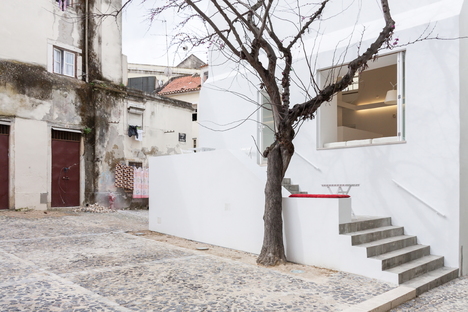 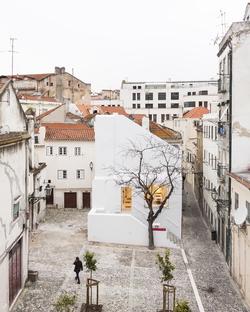 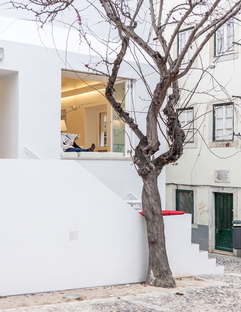 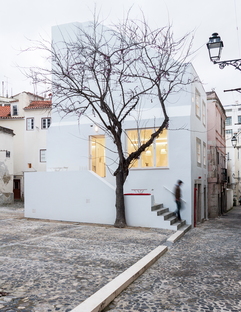 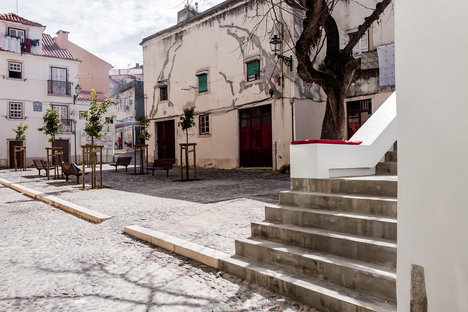 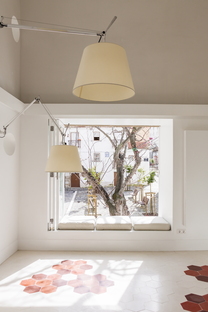 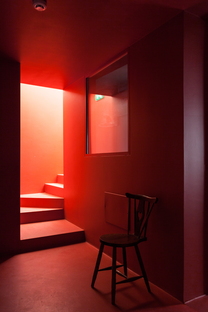 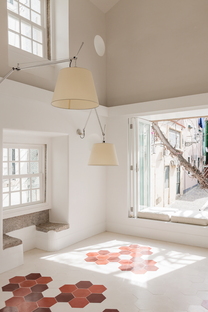 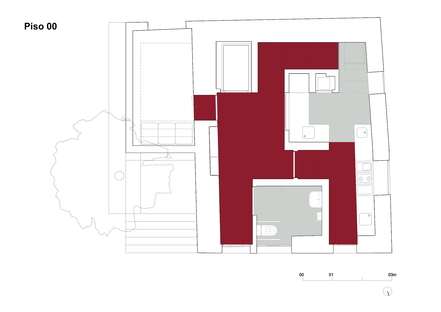 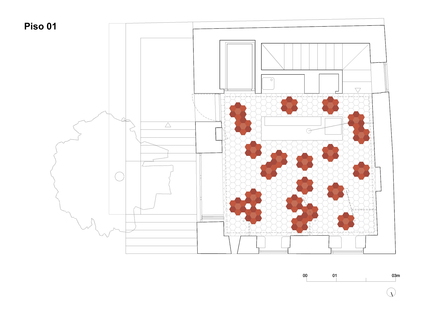