Chosen from among thirty-five proposals, Jean Nouvel's plan for the new Guthrie Theatre in Minneapolis is the French architect's first project in the USA. 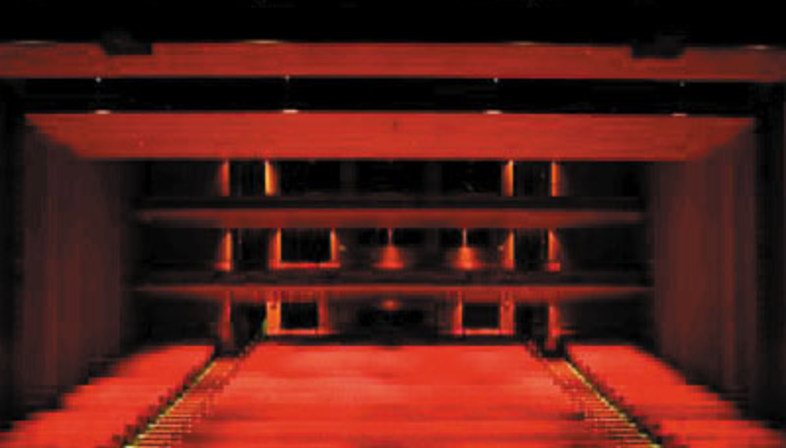 Not far from the Mississipi River, which flows through the city, the new theatre complex may be considered the starting point for a wider-ranging urban and architectural redevelopment project in this prevalently industrial area. The goal is to transform the area with structures and infrastructures that will transform its nature, attracting investment in the areas of culture and services. The State of Minnesota has set aside a considerable amount of money for the project, about 1/3 of the 125 million dollars required to complete the work.
But the project was promoted primarily by the theatre company, which aims to achieve international standing and was in need of a larger space and more efficient facilities in order to do so. Jean Nouvel's project was chosen in 2001 after a scrupulous selection process which involved conducting interviews in potential architect's studios.
Guthrie Theatre company is named after Tyron Guthrie, who founded it in the sixties and opened the theatre designed by architect Ralph Rapson.

The fate of this structure, famous for its stage extending out toward the audience and surrounded by seats on 3 sides, remains uncertain. A committee is fighting to preserve the building, but it seems likely it will be torn down. In any case, Jean Nouvel proposes a similar type of stage for the new theatre.
But there are also two other halls: a 700 seat hall and a smaller 250 seat one. The building, constructed on a 25,000 square metre lot, is much more complete than the old Guthrie Theatre, not only because of the greater amount of space available but also because of the additional facilities it offers, such as rehearsal rooms, office space and restaurants.
The volumes making up the theatre complex are visually dominated by the large cylinder containing the main hall, which has more than 1,100 seats. The rectangular volume containing the foyer has the same impact, extending horizontally toward the river and the waterfall.
Glass and metal surround the forms of the whole complex: on the ground floor, the transparency of glass seems intended to lure the public inside, while the other levels have a more enclosed, compact feel created by use of blue metal. The façade is enlivened with engravings showing scenes from the history of theatre.
The new building is characterised primarily by the articulation of horizontality and verticality, and the effects created by light and reflections on its façades. 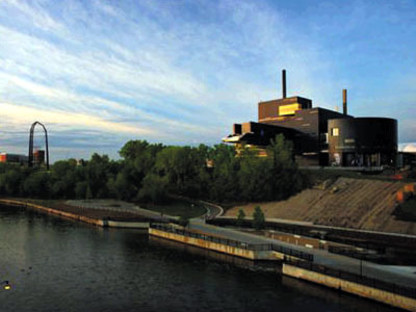 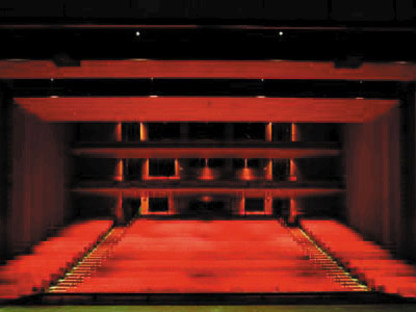 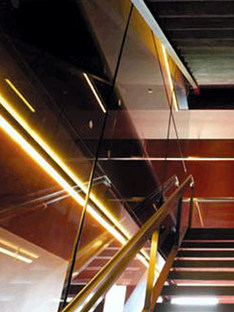 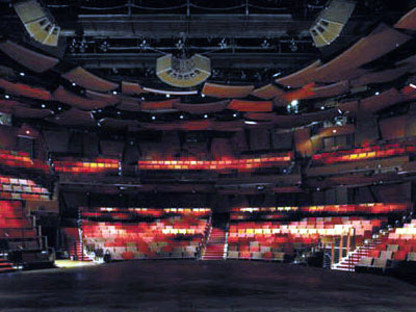