The Altamira caves in Cantabria in northern Spain are famous the world over for the rich decorations discovered in them about 150 years ago, dating back to the upper paleolithic 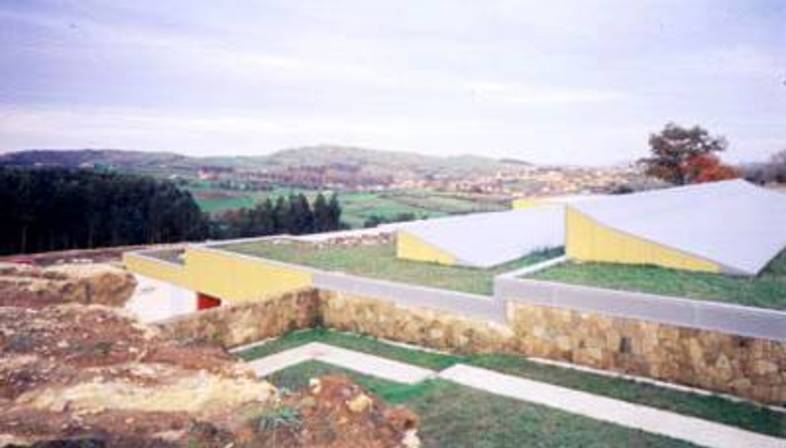 These hand-painted decorations depicting huge prehistoric bison in vivid shades of red are among humanity's oldest works of art. The archaeological find has made the caves a tourist attraction since the early decades of the twentieth century, but their condition deteriorated rapidly due to the excessive number of visitors until they were closed to the public in 1979.
With the passage of time the authorities realised that a reproduction of the caves must be made to protect the originals from further damage. As a result, Museo Nacional y Centro de Investigacion de Altamira, the scientific institution concerned with management and protection of this monument, commissioned a reconstruction from architect Juan Navarro Baldeweg, who completed the work in 1997.

In 2000 the Altamira caves museum was built to exhibit artefacts and testify to daily life in the stone age. A research centre was built alongside the museum to promote exchanges with other world organisations dedicated to the study of the upper paleolithic.
The project included not only construction of the copy of the original cave but improvement of the conditions for the cave's preservation and use of equipment for scientific purposes of conservation and research.

This is why the reconstruction of the cave and the museum are built in a single architectural complex, in a place permitting reproduction of the light conditions and orientation characterising the original cave.
The administrative offices and library on the upper floor form a single body with the cave, extending over the Santillana del Mar hill in three segments structured around an entrance hall for receiving visitors which hosts permanent and temporary exhibition spaces, multi-purpose rooms, a meeting room, a bookshop and a restaurant.

The reproduction of the vestibule area where the humans lived before the collapse which shut off the cave mouth attempts to reproduce the physiognomy of the entire area about 14,000 years ago, when the paintings were made. The copy emphasises the relationship between living space &#8211; the vestibule area &#8211; and the ritual space, with the cave ceiling decorated with multi-coloured paintings of bison.
The building follows the slope of the hill with terraces, which form an ample panoramic terrace for visitors at the western end of the construction. Despite the attempt at perfect integration of the territory, the architecture reveals a strong will to assert its own form, expressed in a particularly flexible geometry which adapts to the slope to create a sort of artificial topography.

Baldeweg designed the cave entrance with great accuracy, even reproducing the little depression in the earth which marked the cave entrance in the stone age and gauging the amount of light reaching the ceiling to allow the visitor to admire the reproduction of the original paintings in its full splendour.
The project emphasises the unique nature of this wonderful place, with its typically Mediterranean stone walls and architecture formed by highly precise, soft lines. The presence of a 150,000 square metre park recalling the landscape of the area in the paleolithic age and constituting an invaluable reserve adds to the natural beauty of the building. 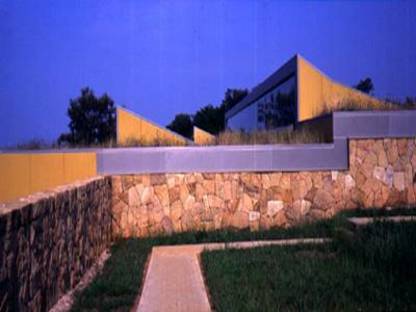 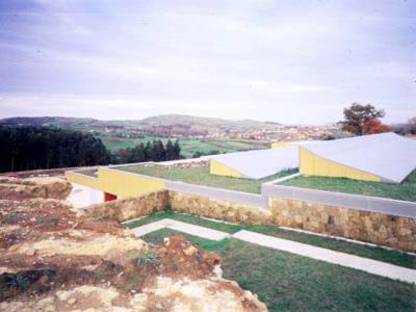 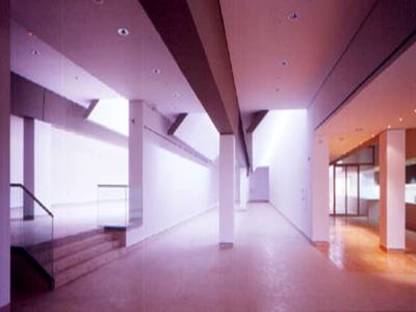 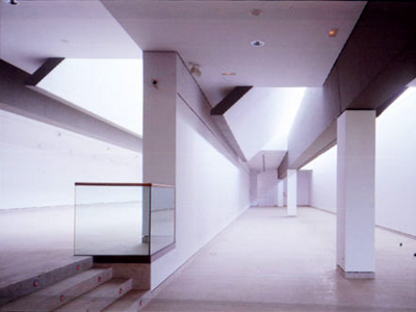 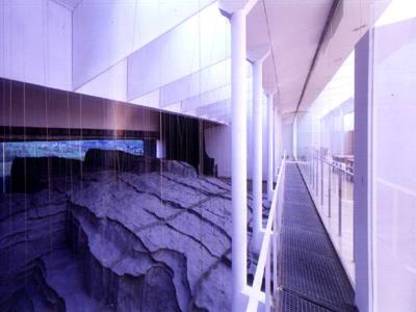