H&P Architects’s AgriNesture is a low-cost housing project which is easily repeatable and incorporates agricultural practices. In Mao Khe Town, Vietman, H&P Architects experimented with the AgriNesture home as a solution to demand for housing combined with loss of arable land. 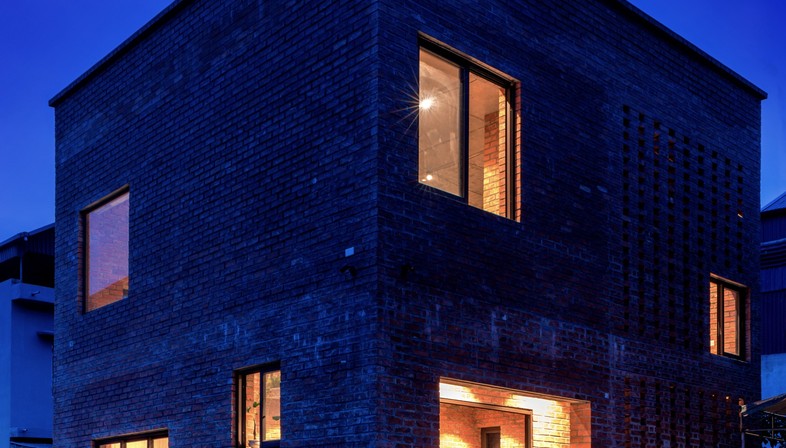 Vietnamese studio H&P Architects came up with this interesting project combining the concept of “nesting” and rooting with cultivation of the soil in response to the country’s increasingly urgent demand for housing. Known as “AgriNesture”, the architectural practice developed and tested by H&P Architects in Mao Khe Town, in Vietnam’s QuangNinh province, focuses attention on artificial, planned development of the natural environment using materials immediately available on-site.
Floornature’s mission demands a special focus on environmental sustainability, and we have often reported on developments in construction in areas experiencing particular difficulties as a result of climate change and the resulting modifications to urban environments. Vietnam is one such area, where difficult conditions are apparent in architectural renewal projects designed to respond to the phenomena of mass migration and major environmental change. In 2016 we published a photo feature by Milanese photographer and film director Lorenzo Ceva Valla demonstrating the visual impact of the human presence in the crowds of metropolises such as Ho Chi Minh and Hanoi. This is the reason for the importance of the results of research and study proposals by studios such as Vo Trong Nghia or Tropical Space which have formed in the country and are constantly exposed to its evolution and problems.
H & P Architects is a young studio founded by Doan Thanh Ha and Tran Ngoc Phuong, who met while studying at Ha Noi Architecture University. They began practicing their profession right after graduating in 2002, attempting to take architecture’s social implications into account in their work on projects in disadvantaged and poor areas, coining the slogan “Architects for the poor”. Their experiments led to definition of concepts linked with the idea of necessity, such as necessary space (the minimal amount of space for good quality of life), necessary materials (use of low-cost, recycled and locally available materials), necessary technologies (appropriate to difficult contexts such as hand craftsmanship or traditional building methods, combined with knowledge of current developments to improve performance and a participatory approach to promote a critical conscience and a sense of responsibility to the community).
This reflection is a result of long-term observation of the anthropological phenomena taking place in Vietnam. The architects themselves note that 70% of the country’s population makes a living primarily from agriculture in rural areas, but twenty years of rapid industrialisation and urbanisation have subtracted millions of hectares of arable land, leaving almost three million workers unemployed. The country’s population has grown by more than 15 million, driving urgent demand for housing, and massive waves of construction have led to conversion of what used to be rural areas for residential use, generating vulnerability in changing communities. The relationship between humans and nature has been a great source of concern as a result of the severe natural disasters such as floods that often affect these areas.
How to respond to the demand to provide housing for new generations of migrants from the countryside to the city without profoundly altering the relationship with the land, and with farming, that is traditionally a part of this country? The AgriNesture project offers a model of a minimal home for urban settlements that still allows room for farming. The nest metaphor is perfect, because it is something between dwelling space and cultivated land.
The standard envisages creation of a very inexpensive frame of reinforced concrete pillars and floor slabs raised about 45 cm above ground, or 120 centimetres when building in areas susceptible to flooding. Almost cubic in shape, on two levels, the model home can be built with three kinds of curtain wall, depending on its geographic location: rammed earth walls 30 cm thick, or a double skin of brick totalling 30 cm thick, or brick infill only 10 cm thick, with a metal trellis on it for growing climbing plants such as grapevines. As an additional expansion, the open spaces between the levels may be closed and the construction raised by one level, extending the concrete structure and building a green roof at the top of it on which to plant crops to support the family. Simple, economical building methods based on local traditions encourage the inhabitants themselves to further develop their homes, using the techniques most appropriate to their site and available resources to complete and finish the buildings. The involvement of other individuals also generates an effective organisation of work.
Repetition of this living unit – which can also be used to construct social centres, health centres, schools, etc. – in a grapevine structure generates interstitial shared spaces in which to build new relationships. 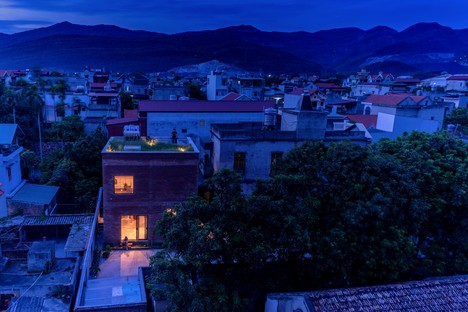 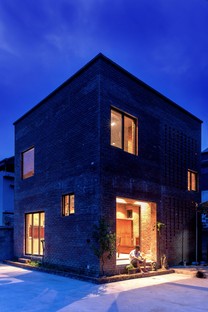 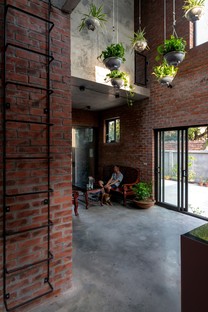 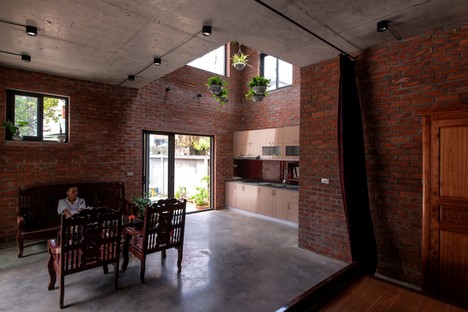 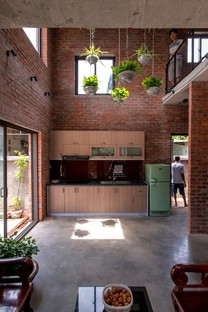 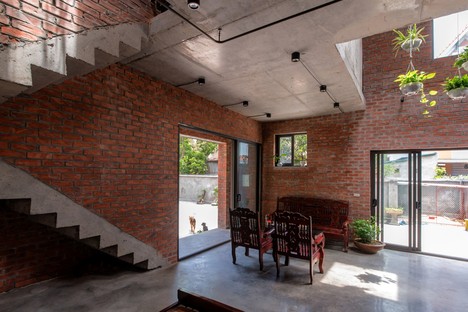 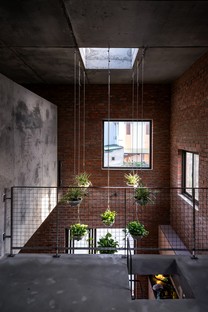 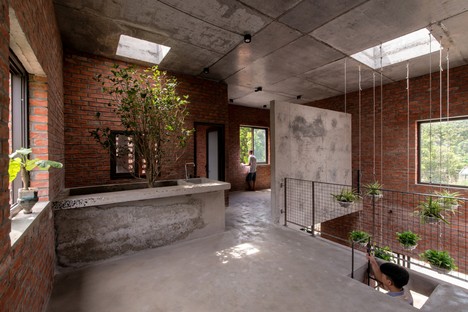 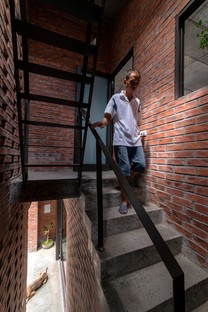 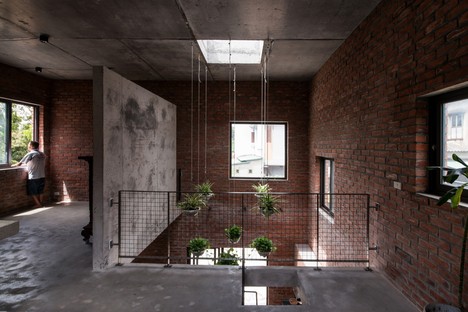 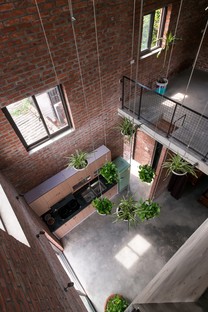 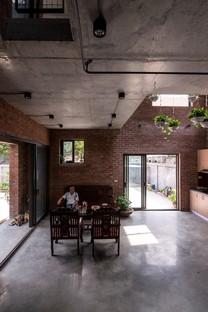 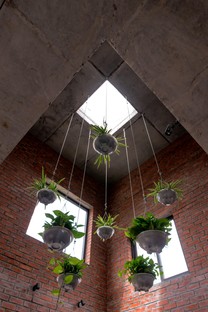 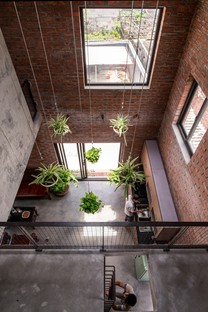 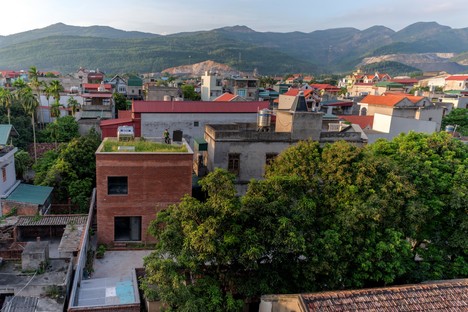 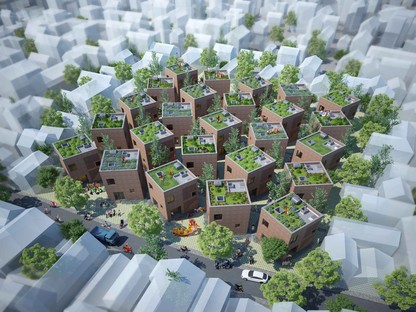 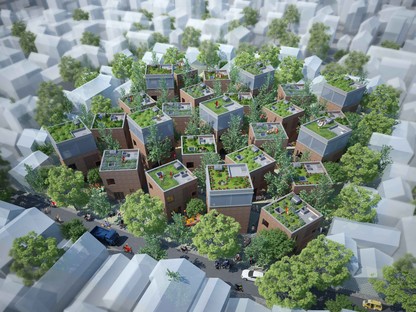 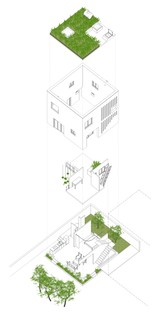 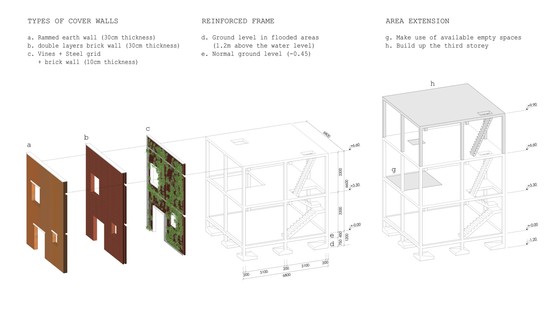 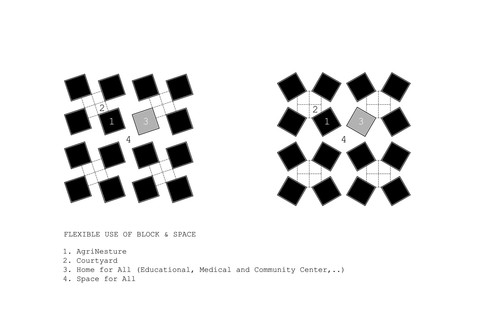