A “simple” house, as far removed as imaginable from a high-sounding title such as “House of the Year”. And yet, it is the winner: House Lessans. The house designed by the McGonigle McGrath architecture studio in County Down, Northern Ireland won the prestigious title that the Royal Institute of British Architects awards annually to the best residential project in the United Kingdom. 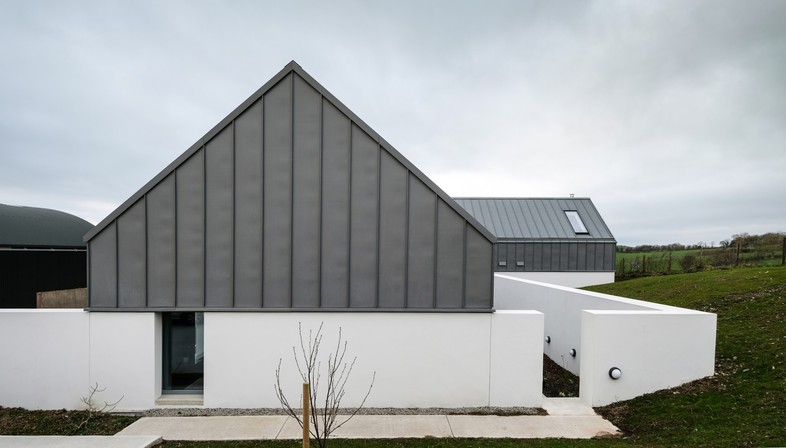 On November 13 the Royal Institute of British Architects (RIBA), the professional organisation that brings together UK’s architects, announced the winning project of one of its prestigious annual awards: the House of the Year prize, which recognises the best residential buildings built on British territory.
The winner was selected by a special jury among the eight finalists and was announced during a Channel 4 television broadcast, which has followed the final phase of the award for a number of years. The House of the Year 2019 is House Lessans, a residential project designed by the McGonigle McGrath architectural studio in Northern Ireland. With great attention to the natural as well as the built context, the architects designed a beautiful new home on the site of an old farmhouse. A house that the jury referred to as “exquisitely” simple and which is as far removed as imaginable from a high-sounding title such as "House of the Year". The jury recognised that the McGonigle McGrath architecture firm not only created a refined work, using an apparently simple architectural language and with great attention to every little detail, but also that it achieved such an important result realising the house with a rather limited budget. The project designed by the McGonigle McGrath architecture studio fits into the rolling landscape of County Down in Northern Ireland. Preferring linear shapes, together with simple and regular volumes, the architects constructed a new building which, together with the existing structures, constitutes an architectural ensemble well rooted in the landscape and in its rural context. A detail that has not escaped the attention of the RIBA House of the Year 2019 jury. The president of the jury, architect John Pardey, pointed out that House Lessans represents a true paradigm: a contemporary architecture that seamlessly reflects the local, vernacular and cultural context. The estate consists of the house, an existing barn and other agricultural buildings on the sides. The new building features white concrete walls, with the upper part and the pitched roofs covered with zinc sheets. Solutions and materials that echo the adjacent barn, typical of the local rural architecture, rooting the house into the county’s agricultural landscape.
The house consists of two L-shaped perpendicular volumes. Inside the house, the architects designed essential and minimal environments, with large windows that offer sweeping views of the beautiful green and of the rolling landscape. The living area is a spectacular double-height space with an open-plan kitchen and huge windows overlooking the outside. The three bedrooms, on the other hand, are equal in size and have been designed as restrained and private environments, overlooking a tranquil and sheltered courtyard garden for additional privacy.
The project was conducted with great attention to every little detail. The architects favoured basic building materials, with a layout of the environments and spaces consistent with the limited budget available. 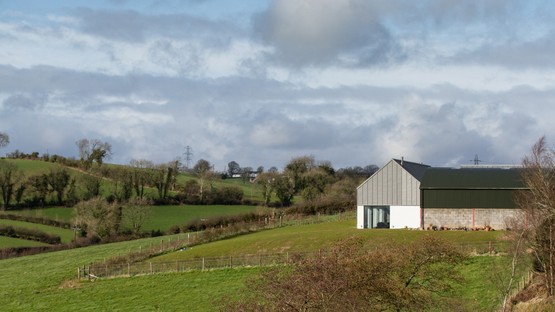 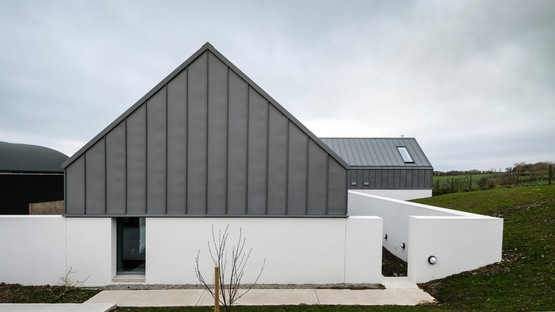 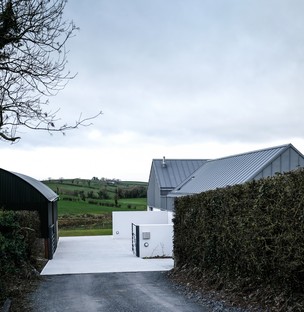 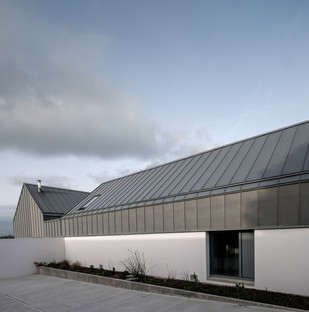 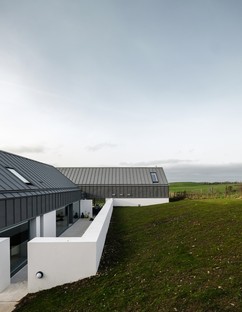 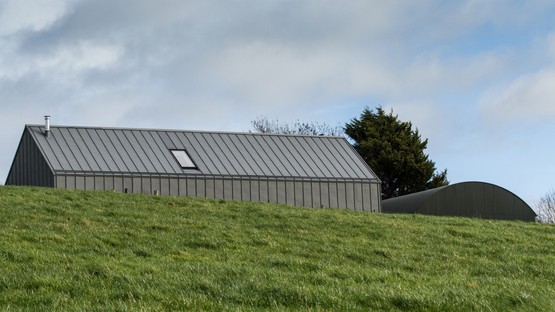 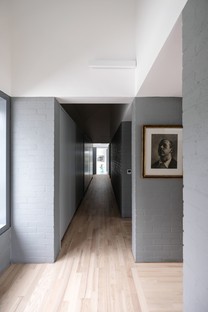 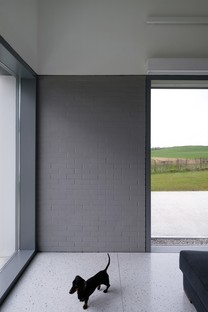 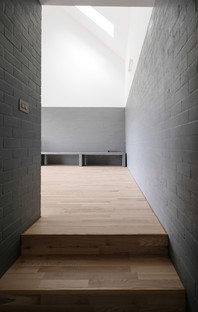 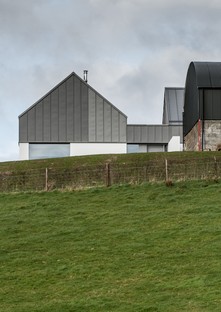 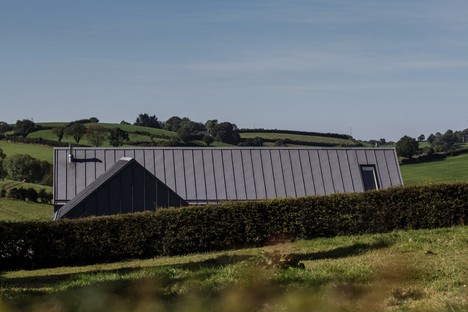 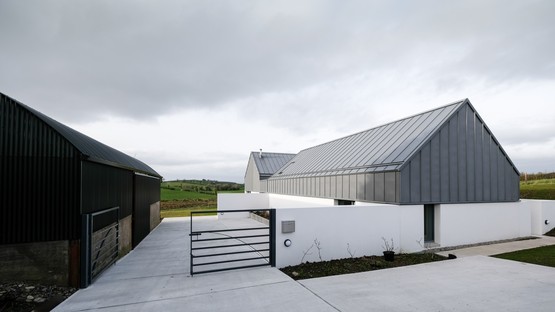 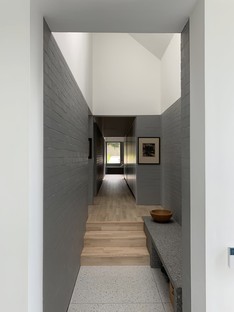 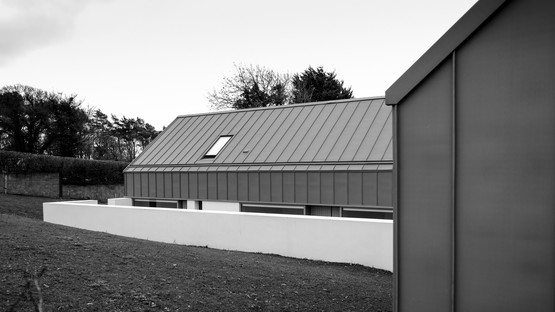 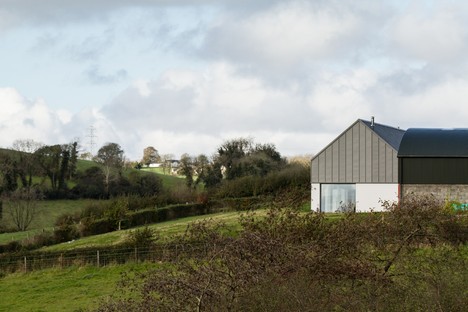 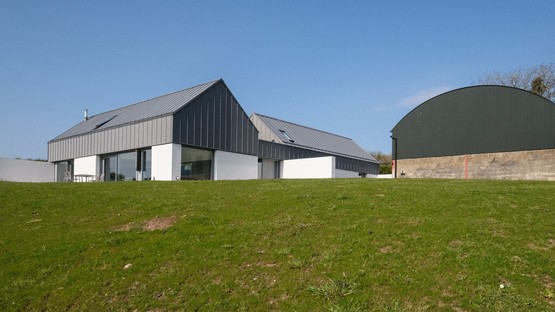