Ever since Berlin was restored to the status of capital city of a united Germany, public institutions and business have been setting aside large quantities of funds for rapid reconstruction of many parts of the city. Potsdamer Platz will once again be a symbol of the frenetic life of the city, just as it was in the 'twenties, when it was the liveliest, most dynamic place in Europe. 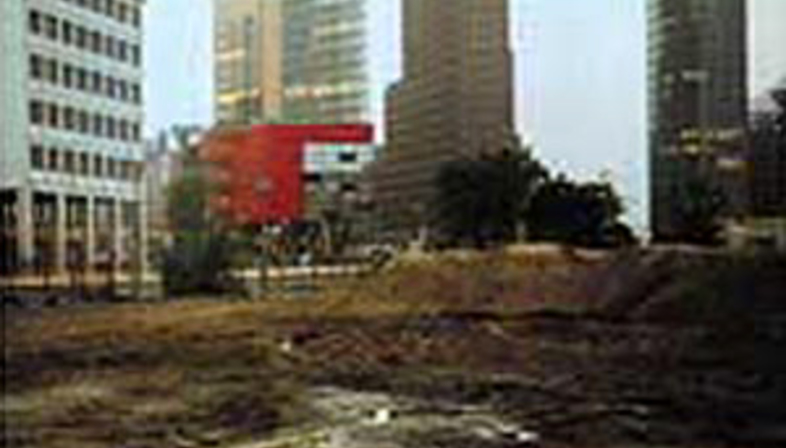 Until not long ago, this square located at a crossroads between east and west was razed to the ground; now it is home to cafes, restaurants, cinemas, theatres, offices and residential buildings.
Given the huge size of the area (600,000 square metres), the project was built on the scale of a small city; in 1993 Renzo Piano and Christoph Kohlbecker came up with a master plan which also involved other architects, including Isozaki, Kollhoff, Moneo and Rogers.
The style of Hans Kollhoff's office tower stands out as different from that of the surrounding buildings, integrating morphology, type and function in a construction that revolves around volumetrics, studied down to the tiniest variation with the aid of scale models.
The construction rises on a triangular lot between Neue Potsdamer Strasse and Alte Potsdamer Strasse; its unusual form grafts the block and inner courtyard onto what is clearly a tower structure.
The building has a two-storey base of greenish grey granite and clear glass facades; its iridescent profiles stand out to trace the bounds of the city block with precision.

Both entrances to the foyer are mediated by two arcades, while the base provides access to the panoramic elevator only; the main hall is one of the most interesting parts of the building, along with a loggia measuring nine metres high in its centre.
The building's form recalls the skyscrapers of Sullivan and Burnham and of German industrial architecture; the portion facing onto the square is the most slender part of the structure, which consists of a complex variety of volumes and heights when seen from the south, made up of a variety of components measuring twenty-four, thirteen and seven storeys in height.
Kollhoff's tower is in a central position between the towers designed by Renzo Piano and Helmuth Jahn, and has an indirect relationship with the square, emphasising the role of volume as a whole. 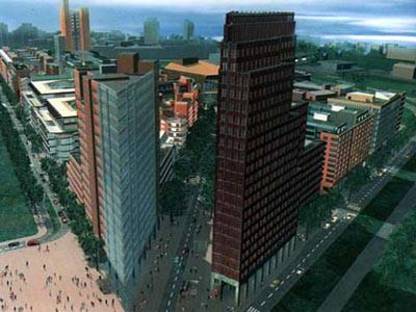 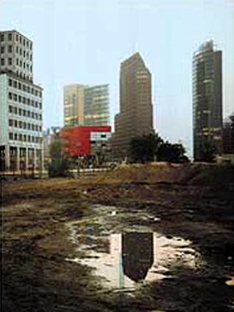 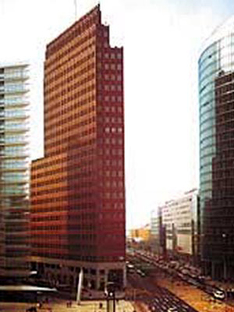 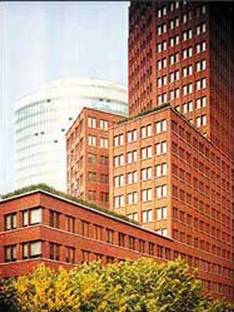