The five Nordic countries - Denmark, Iceland, Finland, Norway and Sweden - have decided to build their embassies in the same place, near the Tiergarten in Berlin. The decision underlines the concept of the "common", giving a strong united image to five countries whose impact is normally relatively limited. Here they renounce their individuality in favour of union in another step toward globalisation.

The basic scheme has a solid form, a "whole" obtained through a play of empty and full volumes. The outlines of the original form are clearly evident, in that the buildings follow the outer perimeter exactly, and a strip of copper connects them in the empty areas. The strip winds around the structures it encloses just like a skin, giving the complex a uniform appearance which has a strong impact on its surroundings. The divisions between the six buildings are toned down so that they become a landmark in central Berlin, looking larger than they really are.
Empty volumes are formed here and there in the compound by "hollowing out", required not only to define each of the embassies and allow it to function but, above all, to invite communication among them. These empty areas defined by the facades of the buildings seem to create a suspended tension recalling the original state of the "whole".

FELLESHUS- "a home for all"
The entrance to the compound is conceived as a structure for welcoming embassy personnel and a meeting point for visitors and Berliners. It is the most visited building in the compound, representing a point for exchange of cultures and information and offering facilities for a variety of cultural activities: an auditorium, conference halls, exhibition galleries and dining rooms.
The disposition of volumes in the Felleshus is characterised by a wooden façade, relatively closed-off, which contrasts with the open spaces inside the building.

The strip of copper enclosing the six buildings is an independent element which adds continuity, a fluidity which sometimes flows freely without touching upon any structure. The copper sheets are assembled on a steel structure with the inclination required to control the quantity of light, wind and visibility.
The strip is made up of 3,850 sheets of copper with a total length of 226 metres.

The architecture blends in with its surroundings on the outside but is perfectly clear and well-defined in the interior, symbolising the tension between nature and refined culture. The plaza in the centre of the complex is paved with flooring of Norwegian and Swedish origin. All entrances are identified by wooden flooring representing a threshold between the city space and the building's interior. Water, a symbol of the sea connecting the Nordic nations, flows through the complex in geometric forms, even cutting across the strip of copper almost as if to allow all the embassies the possibility of "reflection" ... on the water. 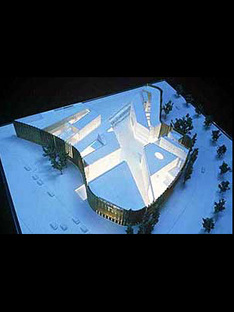 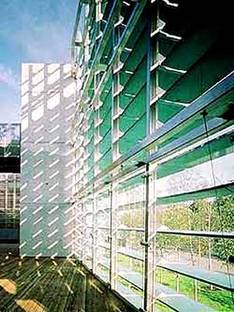 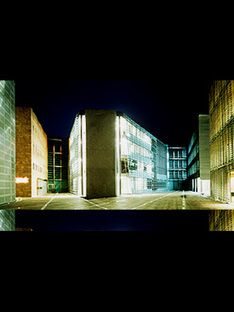 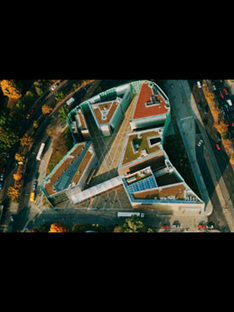 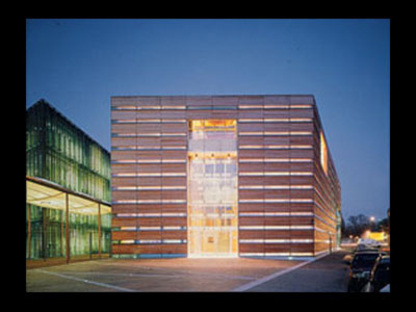 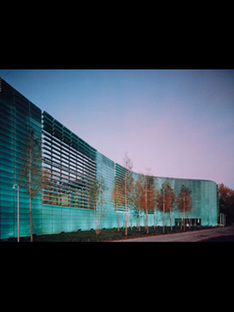