The architecture of Fjordenhus, the new landmark built in the port of Vejle and designed by Olafur Eliasson + Sebastian Behmann with Studio Olafur Eliasson, appears to be inspired by the eternal erosion of the boundary between land and sea. 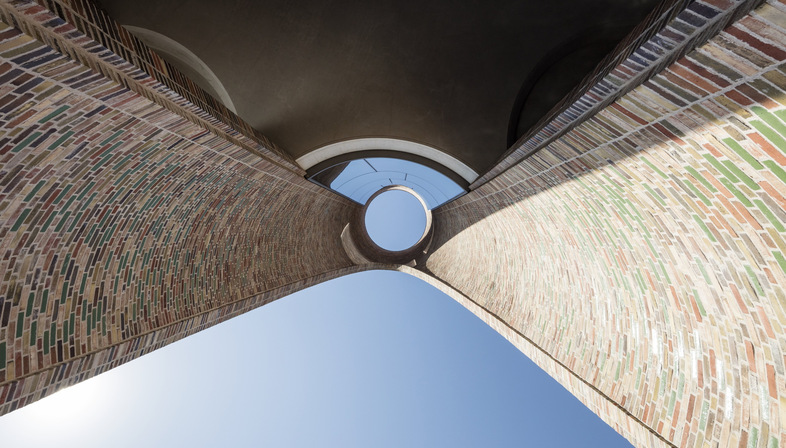 The Fjordenhus, or fjord house, designed by Olafur Eliasson + Sebastian Behmann with Studio Olafur Eliasson, is part of a larger project by the Danish municipality of Vejle, the town on a fjord in Jutland that stretches east to the mouth of Kattegat. Known as the Vejle Harbour Development, the plan, which began in 2011, included the new headquarters of the KIRK KAPITAL A / S investment company, a new island - Harbour Island – with twelve residential and commercial buildings and the municipality’s new tourist port. The masterplan proposal for Harbour Island was developed in partnership with Studio Olafur Eliasson, Lundgaard & Tranberg Arkitekter and Vogt Landscape Architects. Based on plans by Vejle Municipality to create an active connection between the centre of Vejle and the port, the headquarters of KIRK KAPITAL was to become its symbol and a new landmark.
This is why a specific area of the Fjordenhus has been destined for public use for various cultural events, in order to perceive the building as the end of a walkway that leads from the town centre to the port area, focusing attention on it and inspiring its development.
The choice of Olafur Eliasson, a great artist with an ability to visualise space as an architect, can be explained in this sense, giving the work great importance. Amazing cultural gestures like the Fog Assembly in Versailles in 2016, that invited spectators to move and experience the installation that created fog, or like the Your rainbow panorama, the circular coloured glass walkway 150 metres long placed on the roof of the ARoS Museum of Art in Aarhus, attracted the attention of the community and created a great media buzz.
The port area of Vejle had already been a centre of international architectural interest with the building of the residential project named The Wave by Henning Larsen Architects, the same international studio in partnership with which Olafur Eliasson designed the now legendary Harpa Concert Hall in Reykjavik.
With the Fjordenhus project, which led to the creation in 2014 of the Other Spaces Studio, a company in which Eliasson’s artistic component was applied to the experience of Sebastian Behmann (his historic partner in Berlin) in the field of architecture, Vejle and Danish architecture have become the focus of public architectural debate once again, in a project financed by private clients but with a strong public spin-off.
Naturalistic and organic inspiration is behind the architecture of Fjordenhus, whose sculpted volumes seem to allude to rock erosion caused by waves, to the millennia-old and constant wear of the rocks and the eternal boundary between the land and sea. In reality, the metaphor is the result of a mathematical process that intersects truncated cones and cylinders, creating full and empty spaces, multiplied for the four main volumes that once again intersect with each other. In reality, the metaphor is the result of a mathematical process that intersects conical trunks and cylinders, creating full and empty spaces, multiplied for the four main volumes that once again intersect with each other. The ambiguous 28-metre high structure is located in the waters of the port of Vejle, linked to the quay by an invisible floor built below sea level and by a jetty. This single, slender point of access makes the architecture stand out against the maritime backdrop, giving it an austere appearance. The majestic, 3D parabolic openings that mark out its shape, offer glimpses of its tortuous central spaces, making it difficult at first glance to distinguish the interior from the exterior. The concrete structure is almost completely covered in bricks, which not only recall the traditional silos and docks of ports but create uniform primary and secondary facades, increasing interest in this new mysterious architectural object.
It is initially difficult to define its function, if you don’t know that it is the headquarters of KIRK KAPITAL A / S offices, set on four glass floors in the building, above the dual-height reception that occupies the whole landing area of the walkway. This level represents the true moment of interaction between public and private spaces, between property investment and urban space. In these spaces, which are only partially enclosed and covered, practically still immersed in the port landscape, overhanging the water that insinuates itself between the curved surfaces of the structure like the sea between the rocks, Olafur Eliasson has designed a permanent art gallery open to all for his work. His very definition of the Fjordenhus as a total work of art is not excessive, if one thinks that as well as the architecture he has designed all the art works of the reception area and the four upper floors, as well as all the furniture and lights. 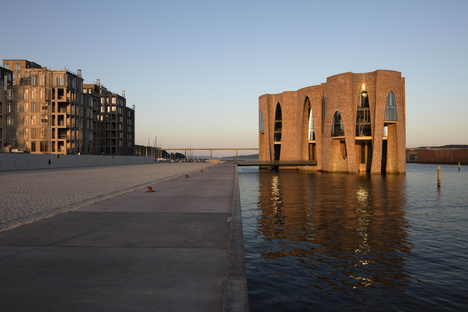 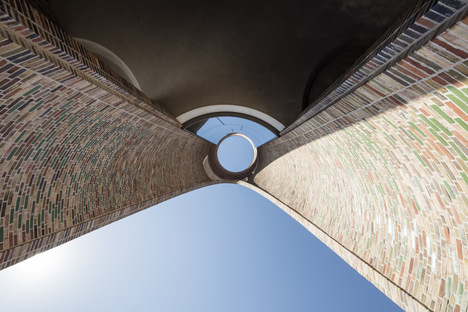 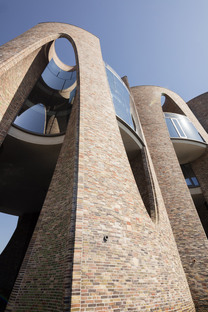 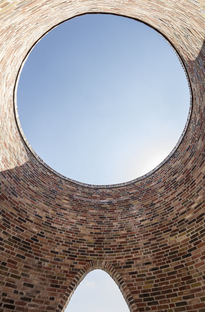 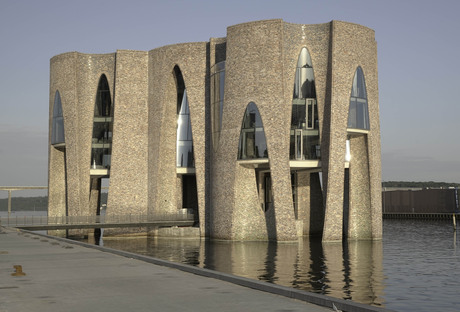 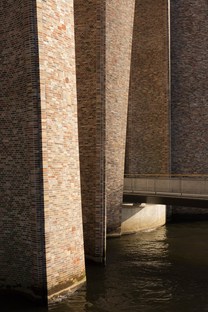 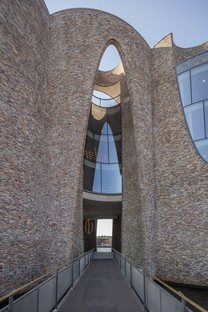 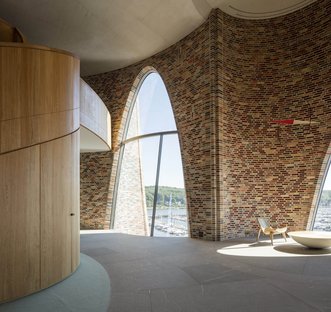 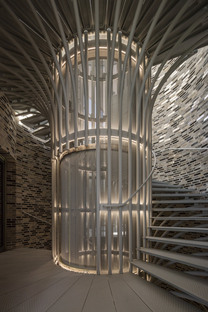 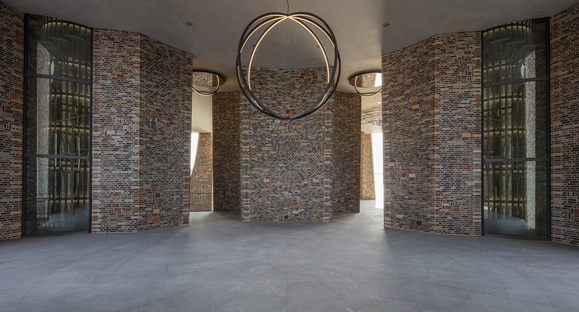 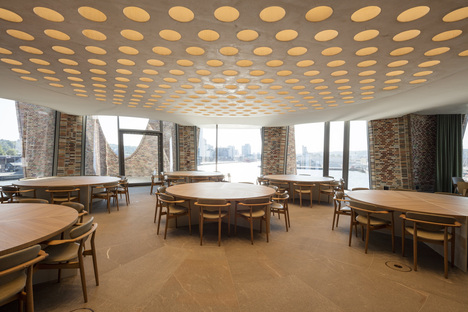 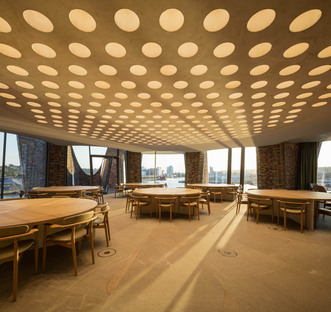 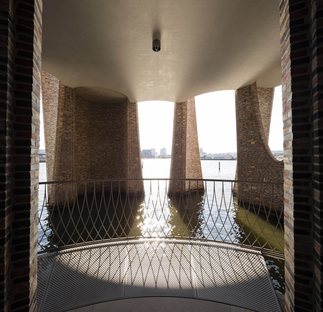 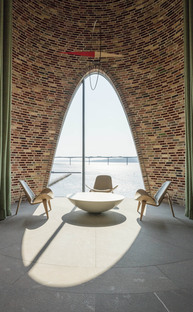 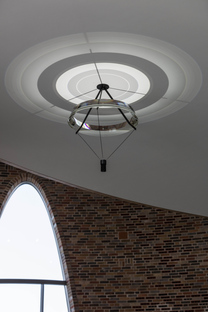 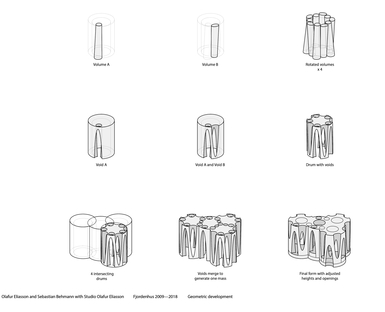 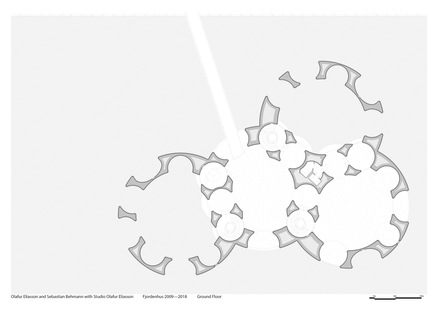 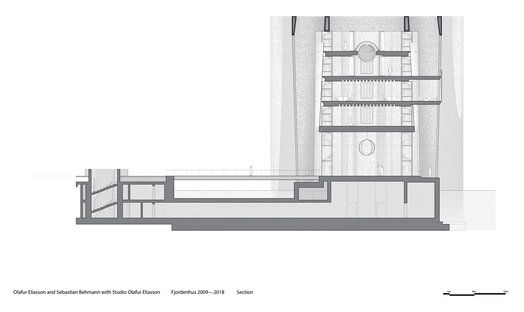