The Gharfa Pavilion is a new work created by Edoardo Tresoldi through Studio Studio Studio, an interdisciplinary laboratory founded by the artist to collaborate with musicians, designers, architects, filmmakers in hybrid and unconventional cultural projects. Gharfa is an experiential pavilion built in Riyadh near the At-Turaif District, a UNESCO heritage site, within the “Diriyah Oasis” temporary creative project designed by the Designlab Experience studio from Dubai.

Studio Studio Studio is a new collaborative project, an interdisciplinary laboratory founded by Italian artist Edoardo Tresoldi. The initiative aims to involve musicians, designers, architects, filmmakers and other artists in hybrid and unconventional cultural projects, interpreting the latest cultural contaminations and drawing from these the languages of tomorrow.
Italian artist Edoardo Tresoldi established himself on the world stage with his evocative and ethereal works, starting with his famous installation for the Early Christian Basilica of Santa Maria di Siponto. For this work completed in 2016, which sees the convergence of contemporary art, archaeology and architecture, the artist was awarded the Gold Medal for Italian Architecture 2018 - Special Prize to Architects’ Client. Tresoldi’s works, inserted all over the world in archaeological contexts, public spaces, as well as contemporary art and music festivals are all characterised by the use of the transparency of wire mesh combined with industrial materials. The artist uses these metal sculptures, which draw or evoke architectural elements, to transcend the space-time dimension and dissolve the physical limits of the actual work.
The new Gharfa project, a pavilion built in Riyadh, Saudi Arabia, also falls in this architectural paradigm, involving several artists through the Studio Studio Studio collaboration. Gharfa is an experiential pavilion that is part of the “Diriyah Oasis” temporary creative project, created by the Designlab Experience studio from Dubai. The “Diriyah Oasis” project was completed on the north-western outskirts of Riyadh, near the At-Turaif District, a very important historical and political site. The site in fact served as the original residence of the Saudi Royal Family and the country’s first capital from 1744 to 1818. A place of great importance also when it comes to architecture, thanks to the various works in the Najd architectural style typical of the Arabian peninsula, which in 2011 became a UNESCO world heritage site. 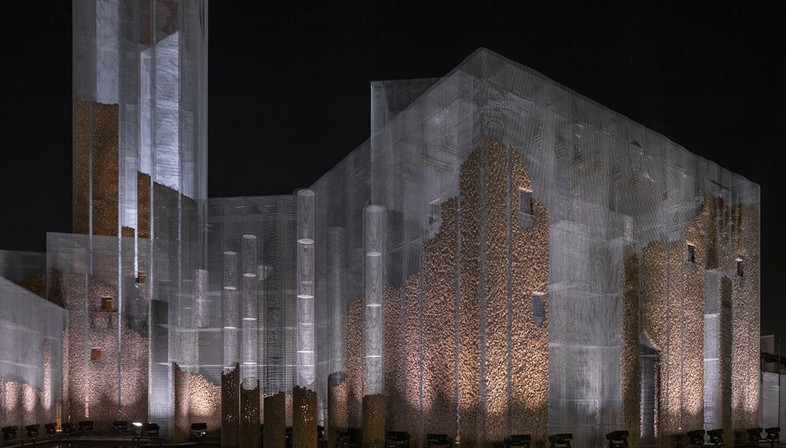 The Gharfa Pavilion is inspired precisely by the nearby ruins, whose spirit is recaptured through the creation of a large sculpture which visitors can cross. An imposing architectural fortress, which reaches 26 metres at its highest point, barely giving a glimpse of what it contains. For this work Edoardo Tresoldi collaborated with designer Alberonero, musician Max Magaldi and with green designer Matteo Foschi from the Odd Garden studio. The artists involved use their own languages and mediums to narrate the different spaces and functions of this site-specific installation: meeting, rest and contemplation.
The structure, depicted by volumes and voids, is defined by Edoardo Tresoldi through the use of wire mesh and cork. The artist draws intimate spaces and narrow paths that invite visitors to enter the volume and discover its contents.
Inside the structure, resorting to theatrical artifices created using scenic materials that are never hidden, but always visible and indeed exhibited as parts of the actual installations, artists stage the intimate relationship between man, landscape and architecture. Each element has been conceptualised as stand-alone, but at the same time as part of a composition. The soundtrack by musician Max Magaldi, for example, has been designed to perceive the musical composition in its entirety only in the centre of the structure as along the way, each visitor can create their own audio mix. 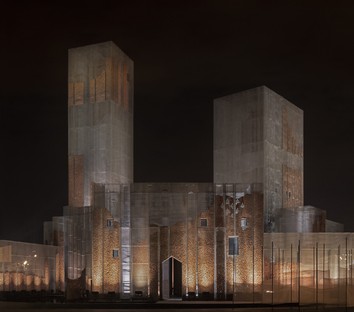 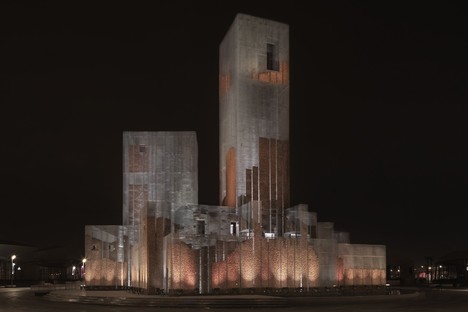 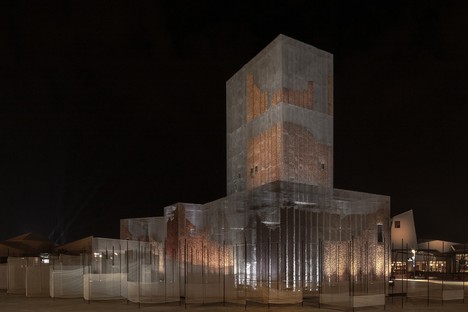 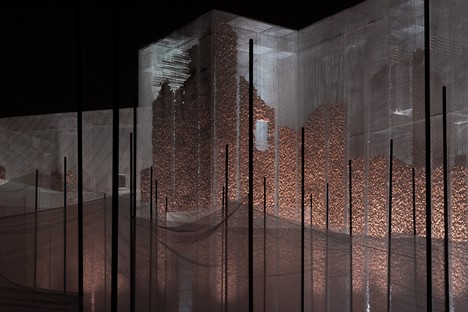 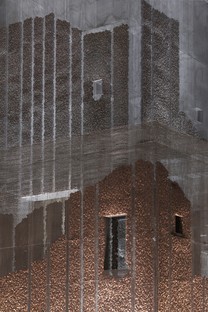 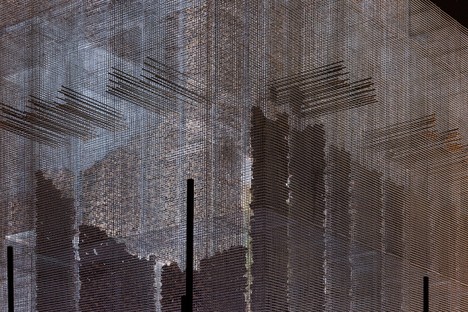 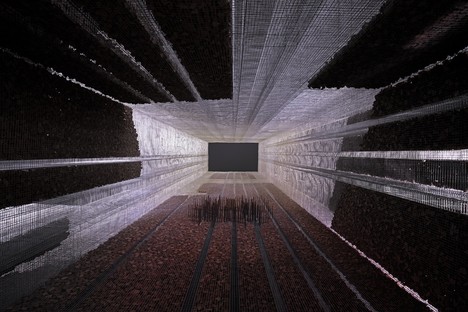 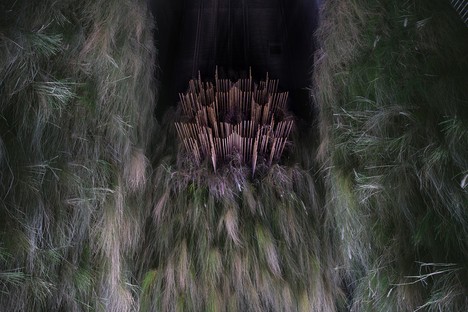 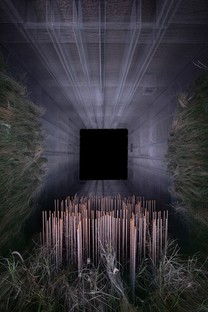 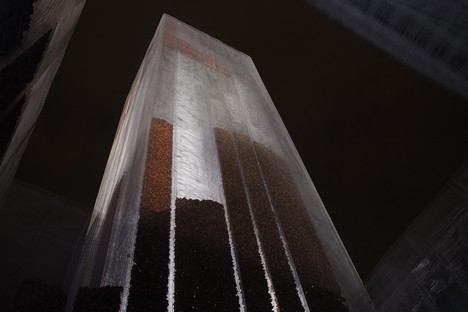 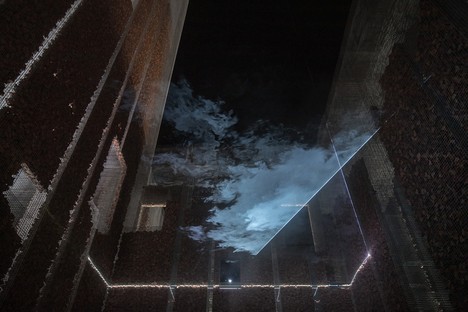 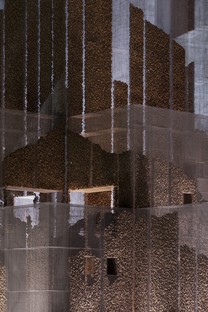 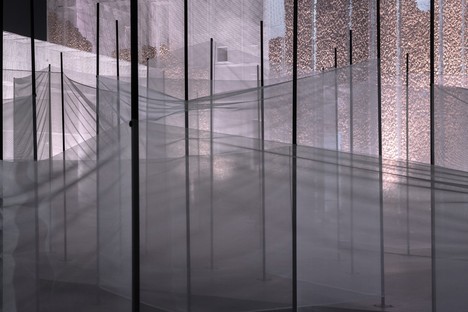 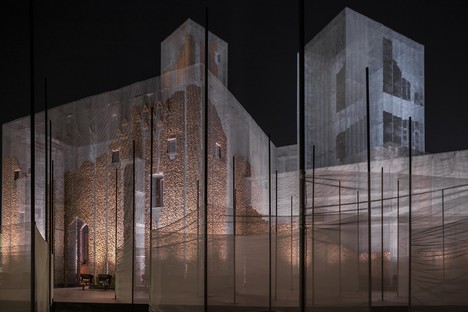 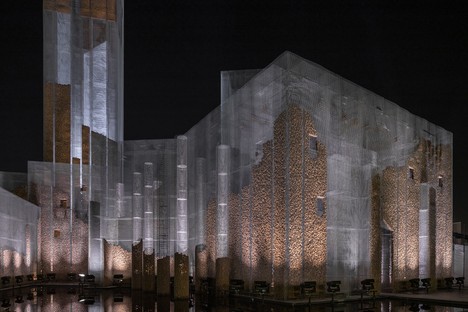 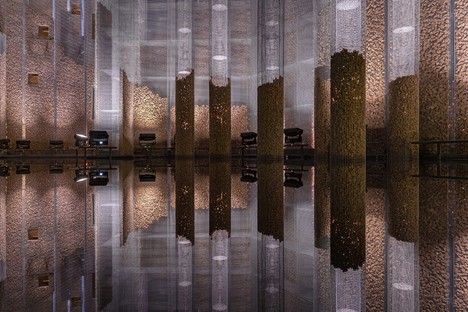 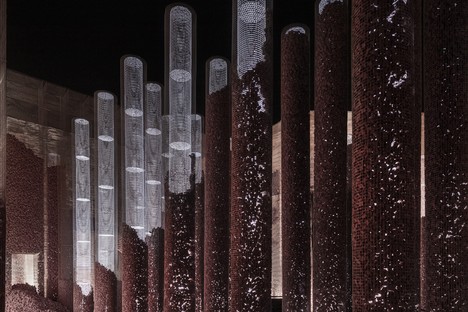 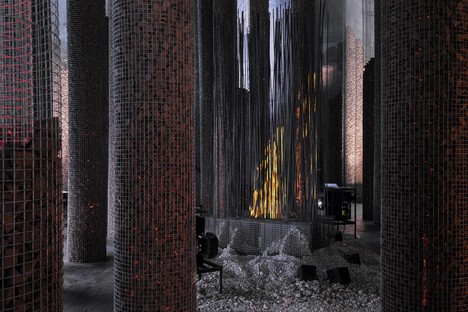