Amongst the various examples of new residences built as part of the ReConstruir México project, in the wake of the 2017 earthquake, we present the House for Rosario in Ocuilan, by Dosa Studio + Rojkind Arquitectos. 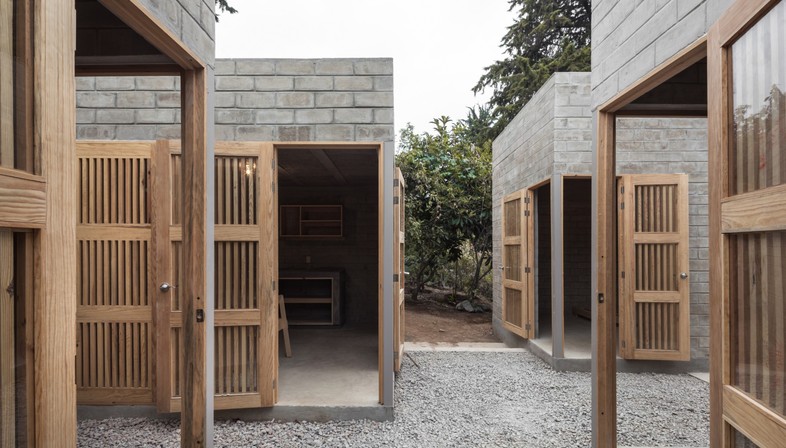 The young Mexican firm Dosa is involved in a property reconstruction project in the wake of the terrible earthquake which hit Mexico in September 2017. Amongst the buildings which have been constructed following the tragedy - which claimed many victims and damaged entire villages - is Rosario’s house, as the designers at Dosa Studio call it, in the village of Ocuilan. Particularly badly affected by the series of shocks that followed the initial one, which came on Thursday 7 September 2017, Ocuilan had more than 800 buildings damaged and more than 250 houses rendered uninhabitable, according to sources from the Agenda Informativa de México.
Like Dosa, over a hundred Mexican and international architecture firms joined the project ReConstruir México, which was launched with the aim of joining forces to carry out conscious and sustainable reconstruction project in the various zones affected by the earthquake. By the beginning of 2019, in Oculian alone, 16 new homes had been built and already handed over to the owners, whilst many more were being designed and completed. Dosa Studio was assigned to the Hernández family, comprising Rosario, her husband Mayolo and their little son Íker, who are dedicated to cultivating plants. For the Mexican firm, this was not their first experience of participatory design. Indeed, we recall the interesting results of Casa Palmas in Texcoco, in which Dosa’s architects were directly taken on by a much larger family than the Hernández family to create a new home capable of improving the living conditions of each member. This was a very different situation, as there were no natural disasters involved, but what makes these experiences comparable is the principles that guided the development of the project. The designers had only 50m2 of living space available to them, and had to use it to organise the life of a family, all under the constraints of a limited budget which led to the use of quick and modest building techniques. On the other hand, the underlying wish has always been to create an architecture intended to last over time, one which therefore did not simply settle for the minimum living parameters, but rather offered a better quality of life to the families involved compared to what they were leaving behind: a house built as a simple agglomeration of rooms over time, in the case of Texcoco, and a house severely damaged by the earthquake, in Oculian. In both situations, the architecture was understood to be a solid starting point for reconstructing the existence of the family unit.
For this to happen, Dosa Studio, which worked in collaboration with Rojkind Arquitectos, decided to involve the history of the Hernández family itself and the memories of their home as it was conceived and built before the earthquake. The original house was described as a set of individual volumes corresponding to the main conventional living functions. The new design of Rosario’s house maintains this subdivision, streamlining the living space into 4 distinct blocks: the kitchen, the lounge, and two bedrooms, the master bedroom’s en suite having an independent entrance. The blocks, all of different heights as if imitating a small village, are placed in a circle around a central courtyard, a private square that constitutes the real living area. Moving between the rooms is primarily done from the outside, as before, but the insertion of numerous doors, all facing this new central ‘room’, promotes reciprocal dialogue between the rooms.
The routes become crucial, marked as they are at the access points to the ‘square’ by steps and concrete slabs, tangible thresholds of the house. The misaligned stepping of the four blocks creates unusual views between the walls, which have one or more trees as a vanishing point, their being symbols for the family of their main business, which is linked to the land and the wealth provided by the vegetation, which endures and resists any natural disaster.
The modest materials are the same ones used for other houses involved in the reconstruction following the earthquake: “ecoblock” for the walls, a building material with low thermal conductivity, similar to concrete blocks but made up of a mixture of cement, lime and sand mixed with earth obtained locally; as well as local wood for all the door and window fixtures and the furnishings.
Whilst from outside, the sight of the walls formed by the blocks suggests a hermetic architecture, from inside, the shutters break the monotony of the walls by allowing for a soft light to enter. There are no fences all around the property, nor has a covering for all the blocks been included, but, as Dosa’s architects point out, the presence of the greenery was sufficient to suggest a border, and the shadow of each volume exists as an extension of the private space. 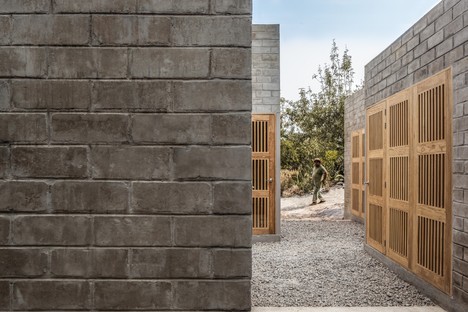 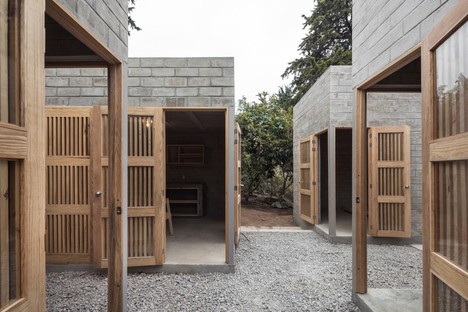 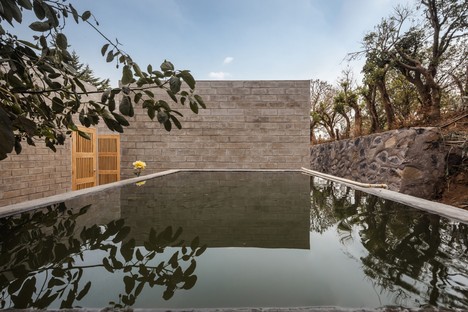 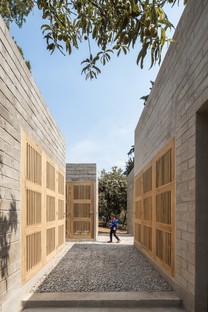 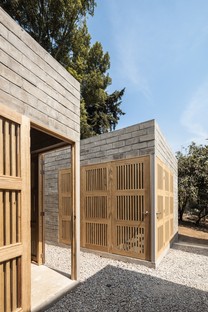 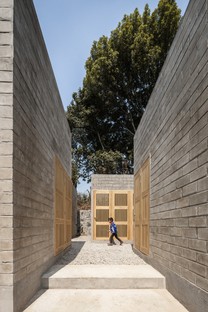 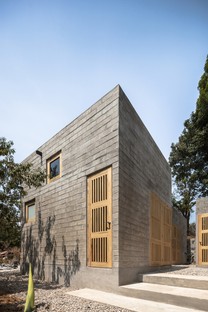 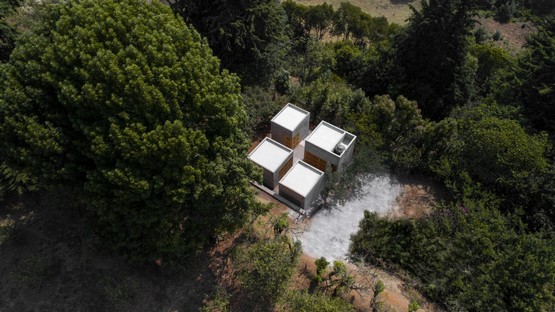 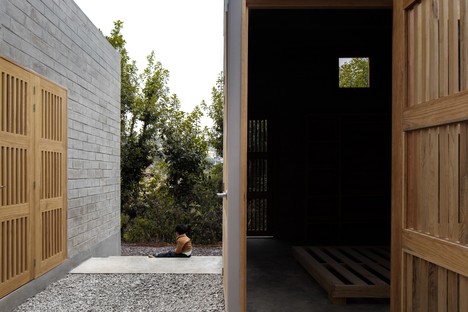 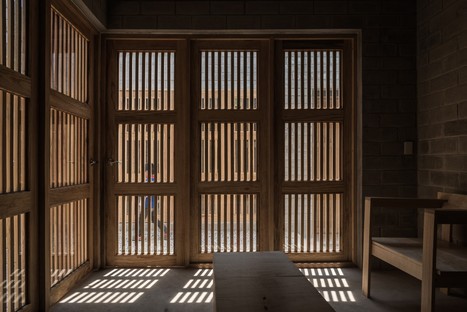 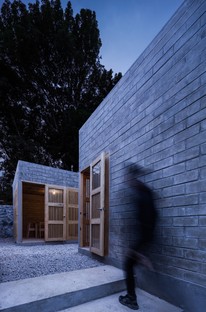 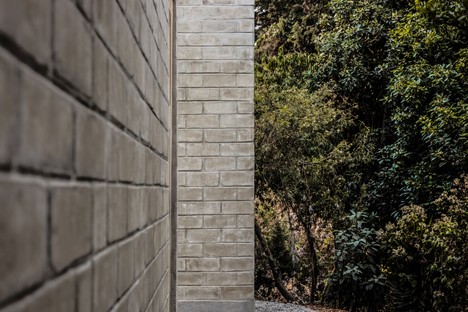 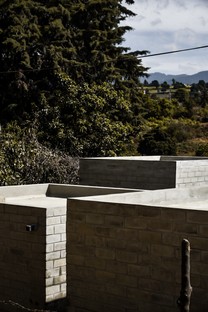 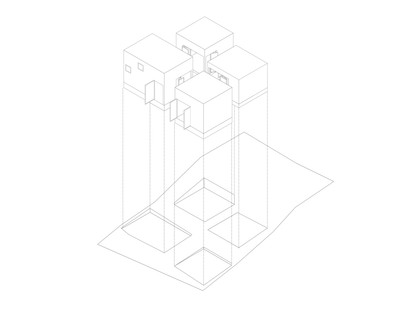 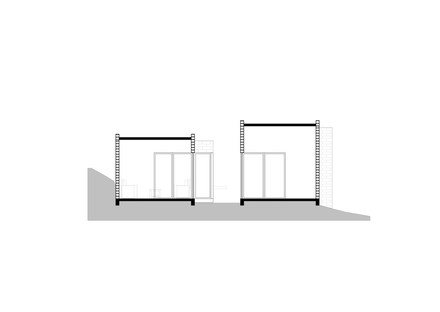 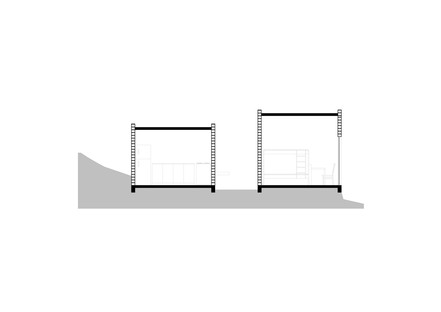 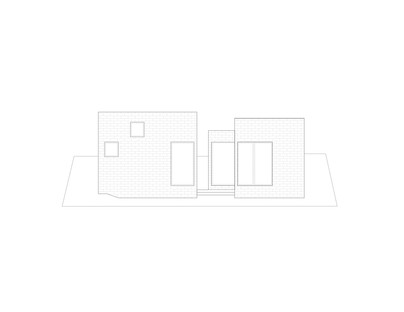 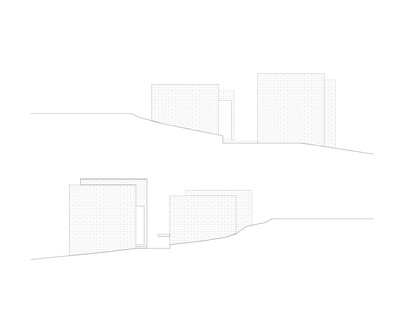