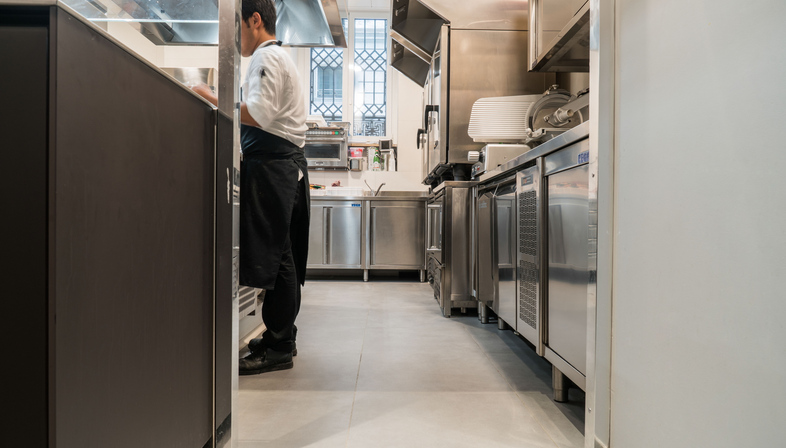 Drawing on their experience designing Identità Expo, the wine and food area in Expo 2015 in Milan, which served about 172 thousand meals in just six months, Digit & Associati worked on an equally prestigious project, the new Identità Golose Milano. The project was inspired by the international congress of the same name founded by Paolo Marchi and Claudio Ceroni, which has been representing Italian and international cuisine through conventions and creative initiatives for 15 years. But this time it is not a temporary event; the architects have designed a permanent space, the fascinating, historic former premises of Fondazione Giangiacomo Feltrinelli, which was established here in 1973 and has now moved to new premises in Via Pasubio.
The first international hub of gastronomy, as its founders described Identità Golose, is a big showcase of Italian and international food in the centre of the city of Milan. At Via Romagnosi 3, close to Teatro alla Scala and the fashion district, Digit & Associati mediates between historic details that had to be preserved and emphasised and contemporary design of a place that was to host restaurants, conference halls, meeting rooms and other hospitality facilities. Places on the border between private and public, but also between inside and outside, such as the pergola at the end of the exhibition route.
The visual permeability of the spaces and direct communication between halls are key elements in the definition of the guidelines governing the layout.
The foyer on Via Romagnosi, where the original high vaulted ceiling has been preserved, affords access to three functionally separate areas. The most important and prestigious of these is across from the entrance door: on the other side of a big wall of glass is the Sala Ovale (the former Fondazione Feltrinelli reading room), with a glass block vaulted ceiling built in the ’50s that the architects decided to restore as a fulcrum of light in a space of warm, light colour. Its central position and layout made this hall the heart of the Identità Golose project and spaces: this is where press conferences will be held, as well as conferences on various food-related topics, and this is where the most prestigious events will open and close. With its capacity of 90 people, the space is directly linked to the second exhibition route in the programme, which focuses on tasting: the new project has added two symmetrical glass doors at the end of the room, connecting it with the kitchens on one side and the reception and dining area on the other.
Going back to the foyer, two more doors appear before the visitor, one on the right, leading into a more private area, with a waiting room and two small halls for use as private meeting rooms or dining rooms, and one on the left with a brass door leading directly to the tasting area. This material becomes the trait d'union between all the spaces, appearing again in the door handles, lamps and columns in the restaurant.
The floor and wall surfaces take on particular importance in these areas, characterising the style of the interiors. In the technical kitchen areas on Via Romagnosi, FMG Fabbrica Marmi e Graniti’s Roads Grey Calm 60x60 ACTIVE tiles cover the floor, while Trax White 60x60 ACTIVE tiles cover the walls with soft, balanced, natural colours, with the intention of creating a welcoming environment for the people who work and cook there.
In the area where visitors are welcomed, overlooking the Sala Ovale, a big panel of glass offers a view of the chef’s table, suggesting moments of entertainment and sharing of knowledge. Behind the Sala Ovale, the wine bar introduces visitors into the tasting rooms, one with 70 seats and a cocktail area and another in a “bioclimatic pergola" facing onto a brightly lit inner courtyard covered with ancient wisteria vines. More glass between the two rooms lets light from the patio penetrate as far as the kitchens, mitigated by a floor of Roads Grey Calm 150x150 ACTIVE slabs. The large size of FMG Fabbrica Marmi e Graniti slabs visually amplifies the size of the rooms even when they are completely full, and contrasts visually with big square sound-absorbent panels on the roof that ensure perfect acoustic comfort.
The new Identità Golose hub covers several areas, including utility and storage spaces on the first floor and in the basement, but is easy to understand at first glance thanks to well-designed routes and links between different areas, which appear cosy, familiar and attractive. The warm hues characterising the whole interior make it an interesting place to meet and have fun after a busy day of big-city life in Milan. 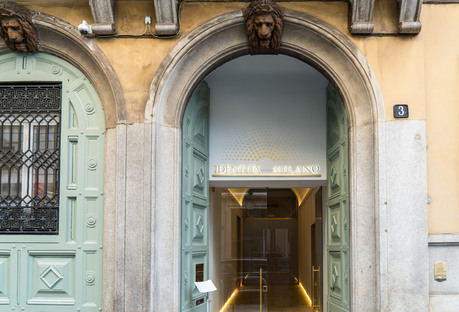 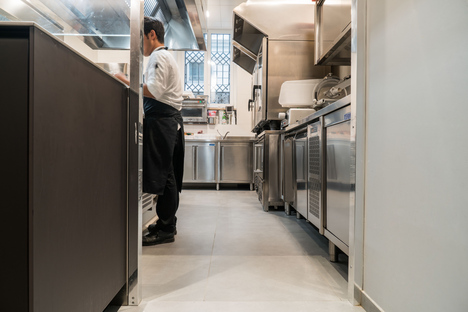 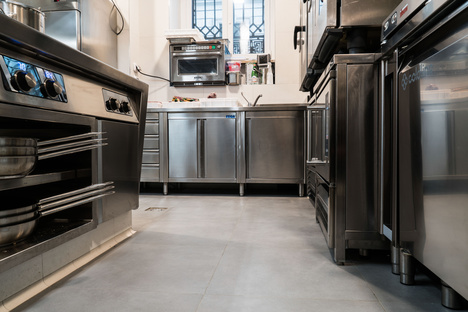 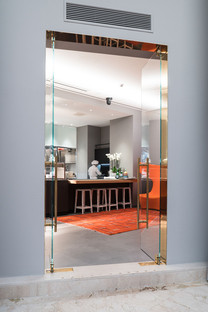 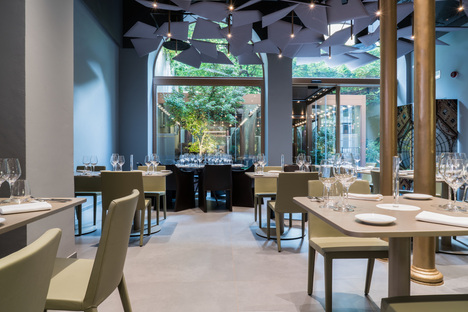 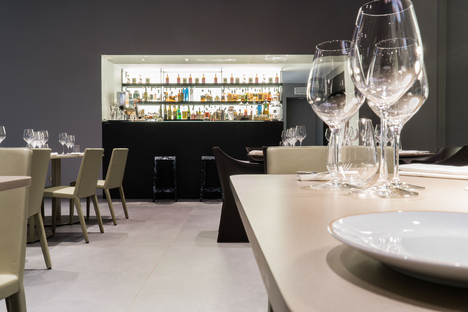 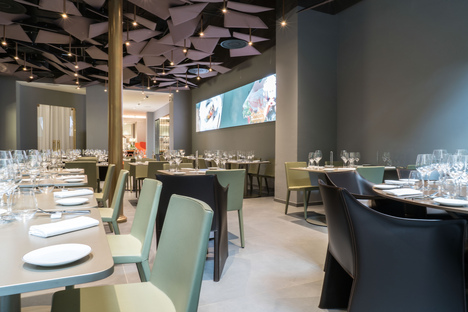 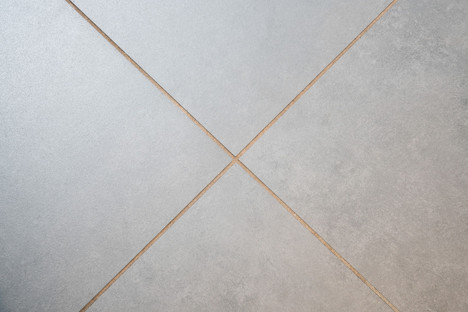 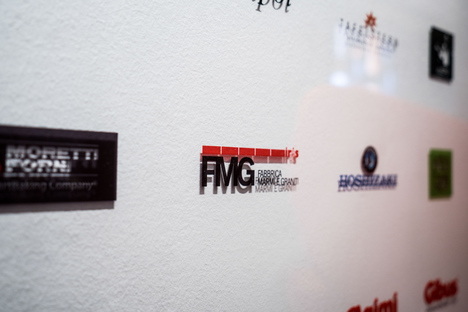 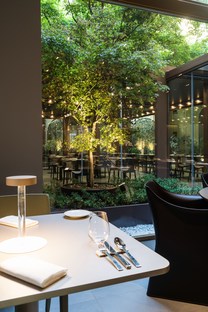 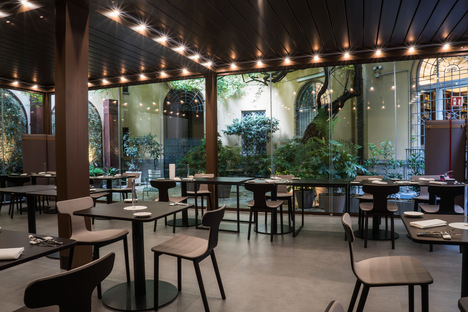 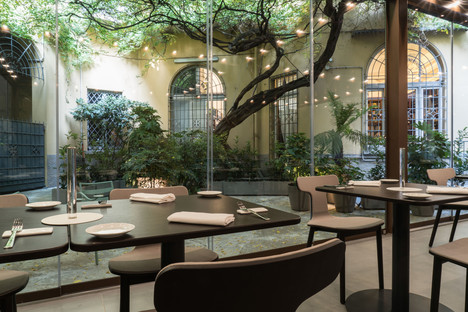 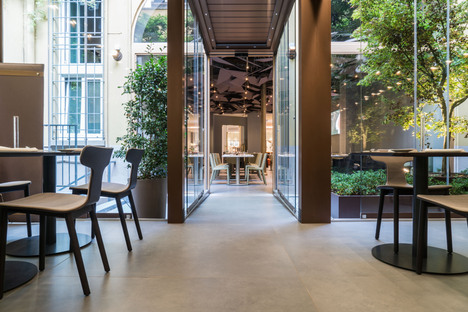 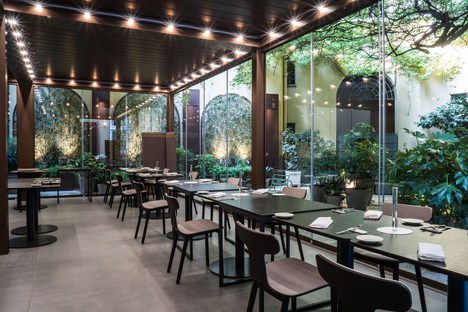 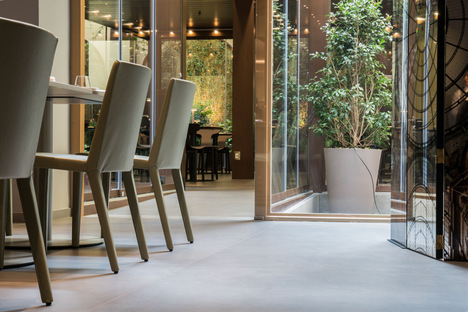 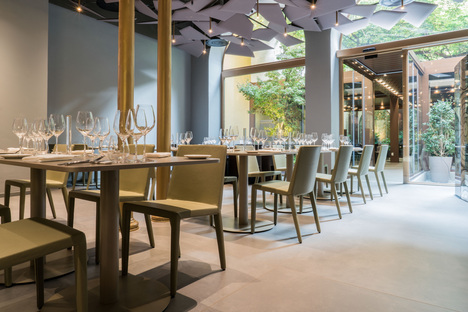 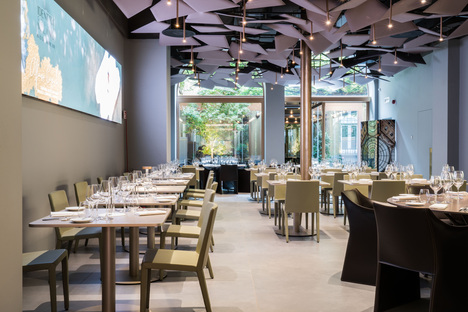 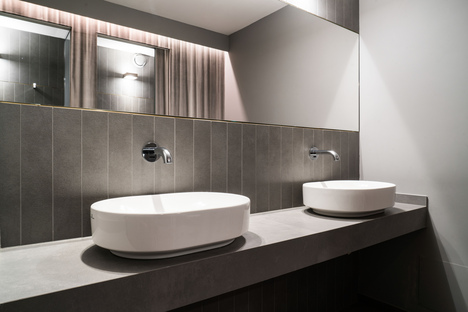 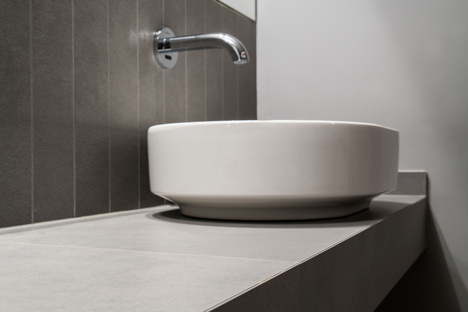 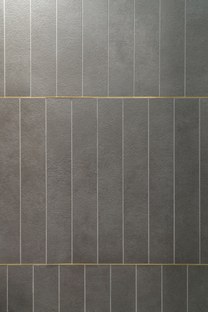 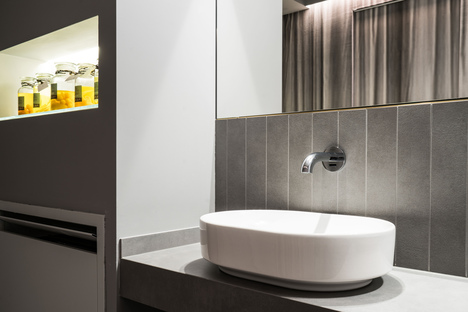 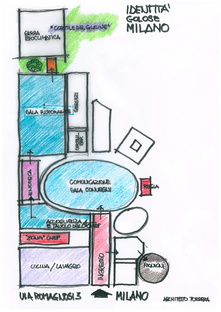 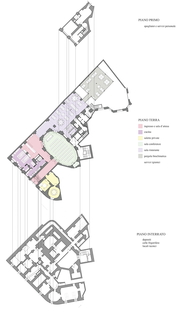