A colour palette which evokes an elegant and refined industrial atmosphere is undoubtedly the common feature linking the two recent interior design projects by the DiDeA Architetti Associati firm in Palermo: the Procopio restaurant/pizzeria and the Antica Birreria Heineken. 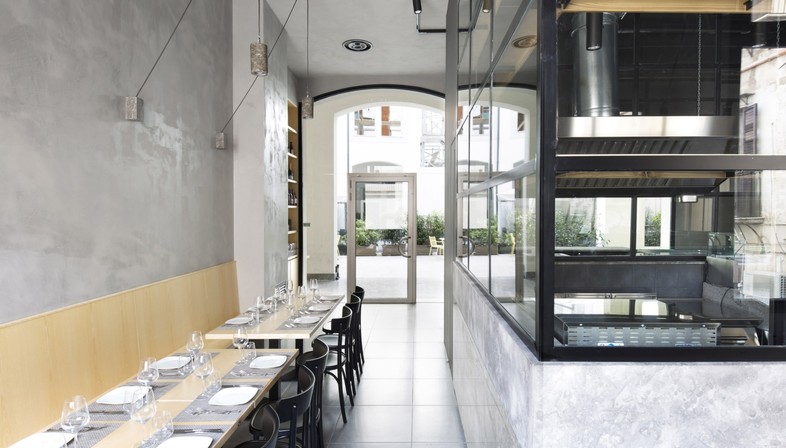 In Palermo in two different parts of the city, in the historical centre and on the corner of two major streets between the Uditore and Borgo Vecchio neighbourhoods, the DiDeA Architetti Associati firm was at the helm of the renovation and interior design project for two venues: a restaurant/pizzeria and a brewery. Two different projects which share a similar colour palette redolent of an elegant and refined industrial setting. Upon closer inspection, other elements common to the two interior design projects can also be recognised. They were both achieved by renovating and giving new life to commercial premises located on the ground floor of residential buildings, but one element which simply cannot go unnoticed is the “sartorial” attention to architectural detail and the choice of materials. This is a distinctive feature of all the projects brought to life by the DiDeA Architetti Associati firm which we have already noticed when presenting other commercial interiors designed by the architecture firm, such as the Muddica bistro in Milan, as well as others back in Palermo, including: the café and lounge bar Ai Giudici, the gourmet burger restaurant Tritalo and the restaurant Dadalia in the famous historic market in the heart of Palermo, the Vucciria. 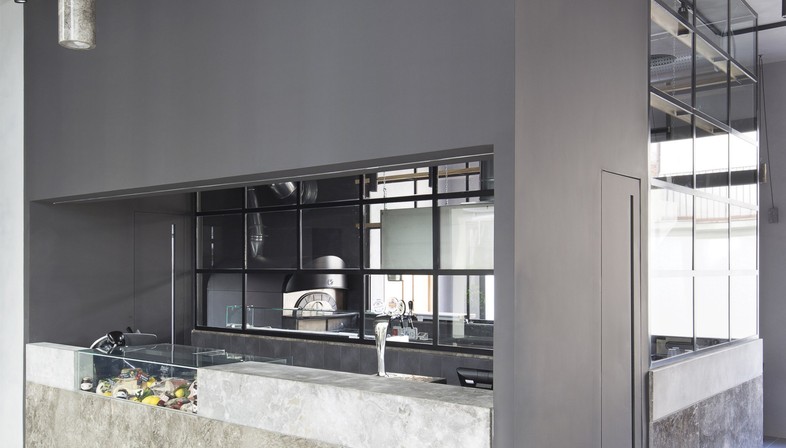 The restaurant/pizzeria Procopio was set up in premises on the ground floor of a residential building in the historical centre of Palermo. Through two large windows, the restaurant/pizzeria directly overlooks the internal courtyard of the building. One of the two large windows is the entrance to the restaurant, which runs lengthways with openings on both sides. The centre is occupied by a well-defined volume that includes the sales counter and the kitchen. Customers can watch their food being prepared thanks to a system of iron and glass frames that allow for the kitchen to be entirely visible from the dining room. Its transparency also ensures that the right amount of sunlight can reach even the kitchen area.
The concept of the project is linked to the definition of this imposing service area which, like a large grey box, occupies the centre of the space. The colour palette, all in shades of grey, is interrupted by the furnishing elements. The architects chose ashwood inserts for the wine cellars and bench along the wall, and black wood for the chairs. The Antica Birreria was set up in a former clothes shop, a space located on the ground floor of a residential building on the corner of two major roads in the city of Palermo. The large windows facing the streets ensure good indoor lighting. Due to the difference in natural light across the areas of the space, the architects decided to set aside the brighter area along the street fronts to the customers, whilst reserving the area deeper inside for the service rooms and kitchens. Taking into account the requests of the client, the owner of other “old breweries” in the city, for this interior design project the architects returned to the somewhat dated format halfway between a Northern European brewery and an Italian trattoria that characterises the group’s other locations and modernised it. The notable presence of pillars, even in the centre of the room, was an important stimulus for finding furnishing solutions, such as wainscoting and benches, that could integrate them and/or climbing plants that could mask them. The elements chosen for the interior design are fine and sophisticated materials which, when combined, have brought to life a bright and elegant space with refined touches of an industrial look. 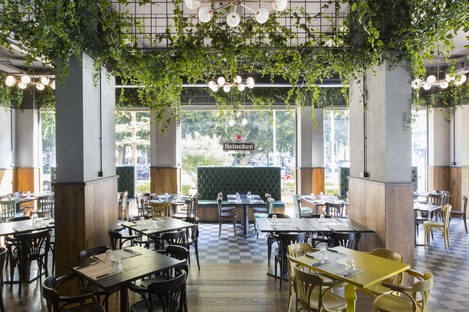 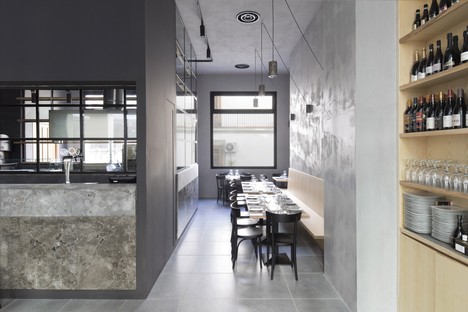 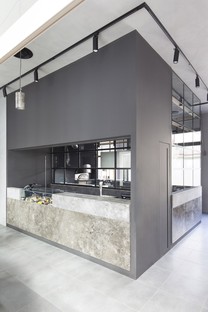 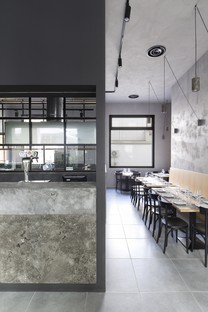 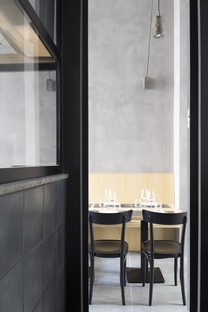 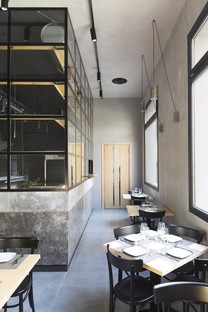 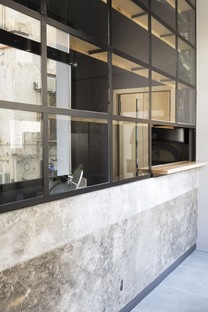 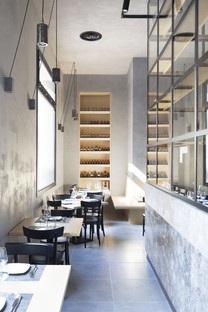 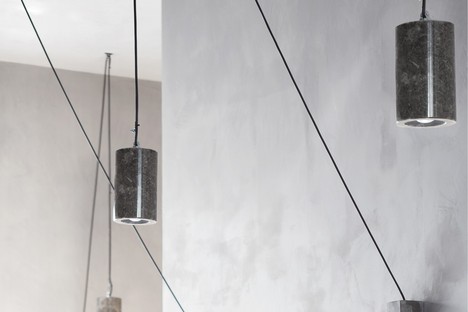 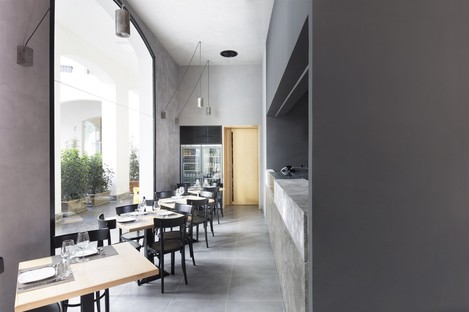 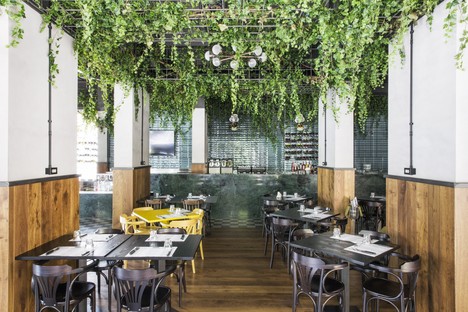 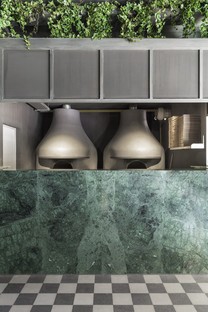 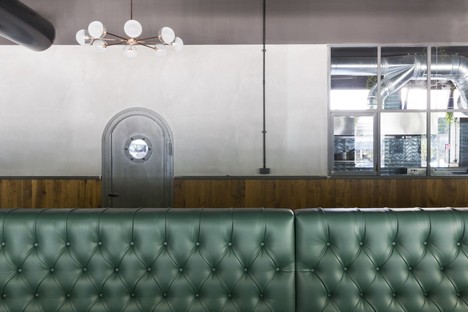 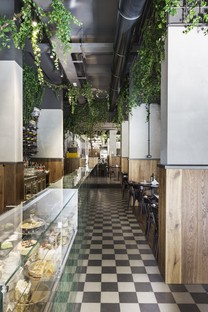 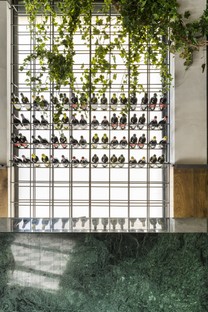 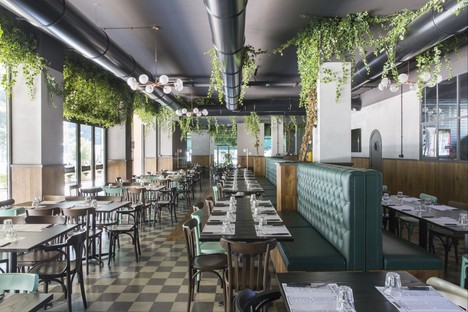 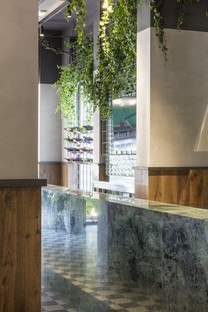 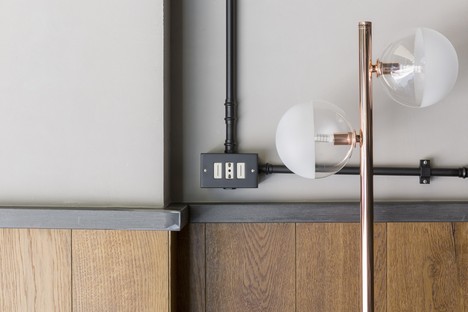