Architectural design has to deal with two strong, distinct realities: global and local, internationalism and nationalism and frequent consequences of this dichotomy are cross-contaminations and hybridizations. 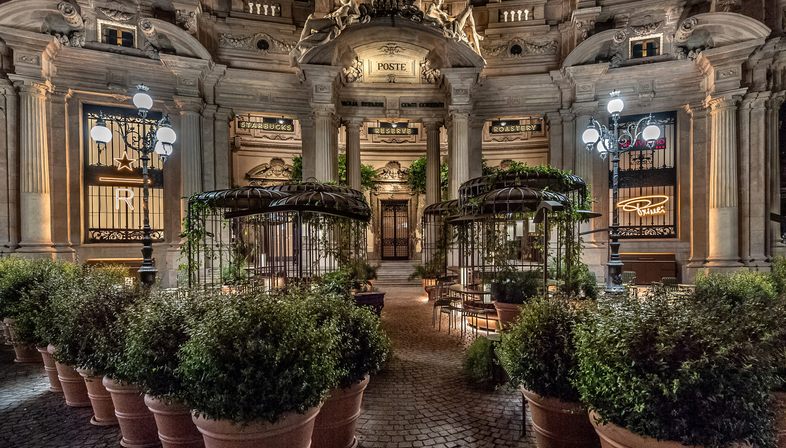 Simon Unwin, at the late ’90s, in his 'Analyzing Architecture', said that “place is to architecture as meaning to language”. Today in our globalized world, become economically, socially and culturally integrated, it doesn’t seem so obvious to be able to express an identity. Architectural design has to deal with two strong, distinct realities: global and local, internationalism and nationalism and frequent consequences of this dichotomy are cross-contaminations and hybridizations.

Glocal, neologism coined to emphasize this interweaving of influences, is playing a role increasingly pervasive in our native idiom, even in those of famous multinational corporations, that, more and more attuned to new generation’s users and responsive to worldwide problems, are gradually renouncing to the rigid policy of their untouchable, universally known, distinctive character, adopting local nuances, customizing their products and image according to regional taste and assuming global responsibilities. Once the retailers aimed to communicate a universal experience, but now they have to think about how to run a global business that is also localized and, to be part of the lifestyle of the consumers, it is practically become a necessity. 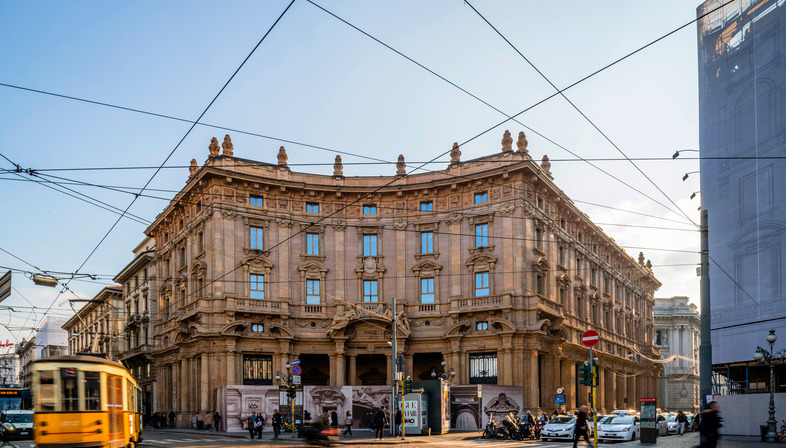 Common around the globe remains the thread of the brand but the influence of geographic locations inspires modifications and adaptations. The strategy is to keep alive the excitement for a product that tastes ‘exotic’, coming from a distant foreign country and to create a bridge of affinities with the new land, introducing familiar additions that could reassure the customers, making them comfortable. Facing new markets’ challenges, they pay careful attention to the heterogeneous cultural behaviors, in order to avoid inappropriate translations. They assert and strengthen their identity with narratives that bring new energy and probe their attentive contributions to the cultural, economic and natural environment, in need to be at the same time globalized and relevant at a local level.

New commitment to sustainability has recently imprinted Starbucks’ direction. To ensure the future health of our natural resources, the coffee giant has announced, with the program ‘Starbucks Greener Stores’, to build and open around the world reducing greenhouse emissions. The framework promises a long-term, eco-conscious operation, a commitment to project, create and operate 10,000 ‘Greener Stores’ globally by 2025. Abandoning traditional design, and using container architecture, the group has inaugurated in U.S. 45 pre-fabricated modular stores. The big metal recycled boxes have been aggregated, avoiding polluting construction on site, and then delivered and installed with minimum environmental footprint. Even in Asia, in Taipei, has appeared one of this first huge Jenga composition from overlapped and interlocked shipping containers, designed by Kengo Kuma.

The architect, who often teams up with the firm, in a previous project, a coffee shop in Dazaifu, along the path to one of the major and most visited Japanese shrines, has proposed, altering the usual Starbucks’ visual standards, a unique system of thin woods diagonally interweaved, honoring the strong, artistic culture of craftsmanship, essence of the place and, at the same time, reflecting with the fluid effect of the pattern, the vivacity of the tourists destination. The mix of traditional and contemporary has matched the client’s expectations, becoming a kind of adopted leitmotif. The endorsement strategy tries to catch customer’s empathy. Approaching a new adventure, a must is to craft the ‘Starbucks’ experience’ honoring the particular chosen location: a very carefully, wisely studied design and equally alluring choices are planned ahead to induce our emotional involvement. Everything must appear extremely spontaneous but nothing is left to chance. 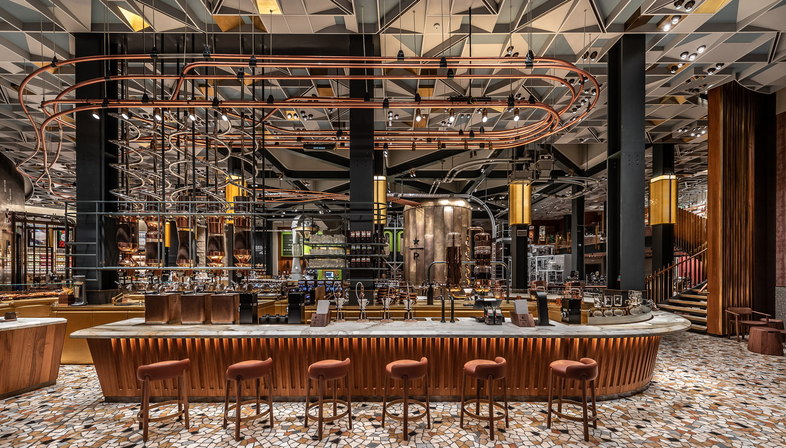 In Italy the weight of responsibility was intimidating. To enter a market that, with its coffee culture, has been the inspirational starting point for the green mermaid, represented a harsh challenge to face and overcome and it has taken almost more than 4 decades to happen. Selected an historic landmark in a charming corner, embodying a significant meaning for the city of Milan, in a prestigious central location, core of the financial district, few minutes walk from famous touristic attractions as Teatro La Scala, the American coffee colossus has chosen opulence of equal size for the decoration of the enormous open interior layout of 2,300 sqm. Everything is displayed on the stage with theatrical choreography with the will to thrill and surprise, involving in a poignant, unique experience.

The Starbucks Reserve Roastery has been advertised as the ‘most beautiful store to date’, and really beautiful it is, as well as rich of delicacies and specialties for all tastes. Just maybe ‘a little’ redundant the insistence to convince about the authentic appreciation for our culture: a bar deck carved from a 30 –foot long single block marble Calacatta Macchia Vecchia, palladiana flooring, hand-chiseled and laid by local artisans, the massive presence of a bright green fully-functioning coffee roaster, made by Italian craftsman Solari, hearth of the environment and even the mermaid, carved in Carrara white marble, are only some of the most salient and striking references.

The polemic, of course, was inevitable, especially in a country like ours. Someone has noticed that the advent of Starbucks sadly changes certain rituality related to the cup of coffee but, it will be not certainly the Reserve Roastery to represent a possible rival or alternative to small local retails. The indulgent and immersive experience is a skillful marketing and image operation that does not claim to win over a regular and affectionate clientele, it is only a high-sounding foothold, to attest the arrival of the legendary icon. It will be, rather, the branches of the chain, the new openings announced to follow, that will perhaps conquer the young people, with their slightly American, more casual and informal atmosphere, the ample spaces and free Wifi. It will not be a competition with the restricted espresso but the supersized cappuccino cup and the more international environment will certainly offer a pleasant alternative. I do not believe it is a question of 'colonization' but an inevitable consequence of globalization, which would challenge also Italians to attempt more ambitious economic adventures, due to their great inspirational know how. It will not affect the poetry of the daily short espresso in the small cafe’ at the corner of the studio, exchanging a few words with the bartender who is usually a friend too, but it will be an opportunity for smaller realities to genuinely express, assert with their own proper language a diversity that belongs to them, without falsifying or diluting its character but only taking into account the times that are evolving. To save, without romanticizing too much the past, small and important inherited knowledge, aware of a world that changes at a very fast pace, can help not only to maintain but also to spread an identity of which we feel proud, not letting it be distorted or fall into oblivion. 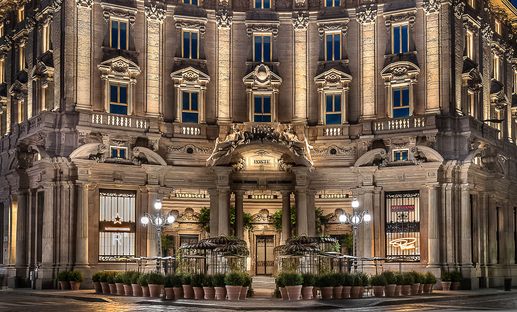 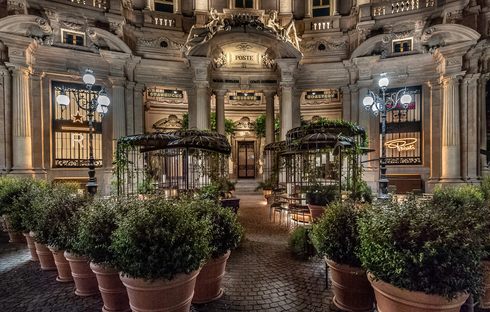 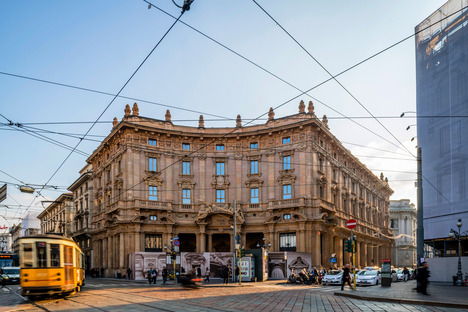 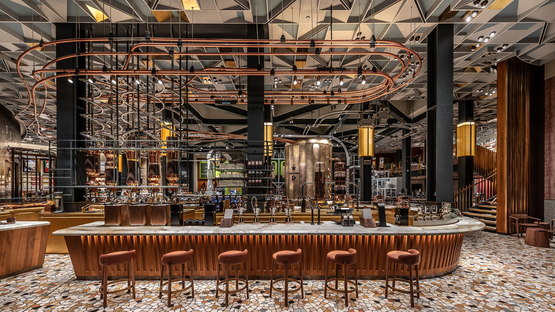 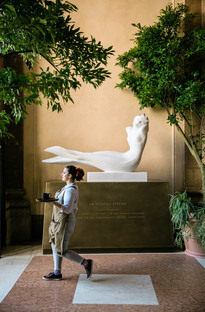 A NEW WAY TO LIVE SUSTAINABILITY IN THE KITCHEN