Ai Weiwei in Venice: Memento Mori, a monument to life made of Murano glass

A gigantic chandelier with no lights, made up of two thousand pieces of black Murano glass, stands out in the Palladio’s basilica in the Abbey of San Giorgio Maggiore, on the island of the same name facing St. Mark’s Square. The Chinese dissident’s artwork celebrates the value of life and awareness of the present. 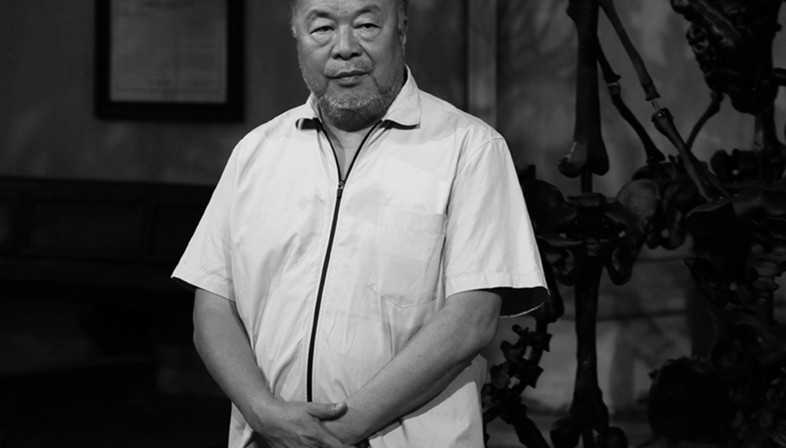 At first glance, Ai Weiwei’s ‘La Commedia Umana – Memento Mori’ hanging in the centre of the sumptuous basilica on the Venetian island of San Giorgio Maggiore looks like a grandiose sculpture in the typical shape of a Murano glass chandelier. And it was indeed made in Murano, bit by bit (more than 2000 pieces), using 2700 kilograms of matt black glass, unfolding in a composition measuring six metres in diameter and almost nine metres high which took more than three years to complete. But it is far removed from the frivolous grace and charming floral motifs of traditional Murano glass: as we approach, step by step, through the solemn church flooded with light designed by Andrea Palladio in the late sixteenth century, the elements making up this great composition become clear: skulls, tibias, femurs, pelvises, ribcages, lungs, intestines, livers, hearts, skeleton hands and feet, as well as skulls of animals (dinosaurs?), with a surveillance camera thrown in here and there among the human body parts and little cartoon birds recalling the symbol of a well-known social network. Alienating, shocking, curious, mysterious, bewitching: close-up observation makes a different impression and suggests different associations in every visitor. The work undeniably has a great emotional impact. 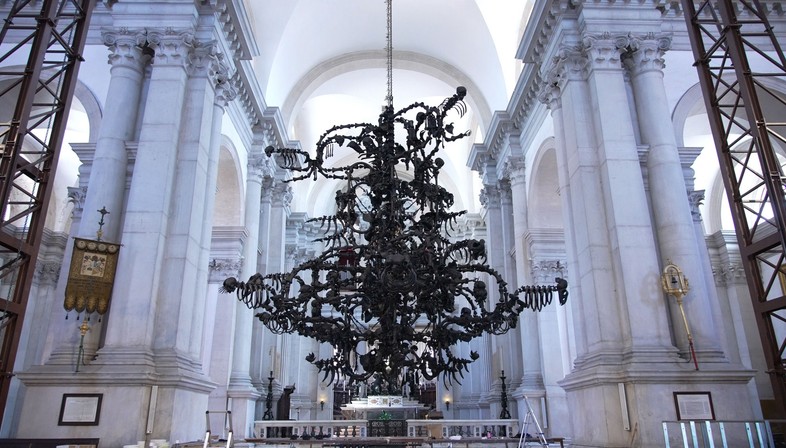 The choice of form, a chandelier without lights, and of glass, a traditional material in Murano, are representative of Weiwei’s career: “I love the wisdom of the past, and I think that we would be lost without understanding the past,” says the artist, who produced the work in partnership with the master glass blowers of Berengo Studio. “We used glass to come up with a new language. We started out with a skill, glass-making, and changed all the details. Glass is a special material; in its presence we reflect upon the relationships between life and death, and between tradition and reality. I never do something simply for the sake of beauty itself, but in order to understand something new and get to know myself better,”, he concludes. Ai Weiwei’s glass is matt black, does not reflect light, and is not transparent. The elements making up the work may appear disturbing, but in actual fact they have something to say about all of us, about what it means to be human, about our organs, about life broken down into its mechanisms. The idea of corporality alongside video surveillance cameras and symbols of digital communication provocatively suggests how these entities have become a part of our very essence. And, in the case of Ai Weiwei, emblems of our control by the great powers, whether economic or geopolitical. Adriano Berengo, a multi-faceted glassmaker and creative designer, founder of Berengo Studio in Murano, made a decisive contribution to the creation of the work, visible until 27 November, as well as the artist’s other works. Berengo comments: “This Memento Mori is a dream come true. I’m very grateful to the Abbey for hosting the exhibition: no space could be a more magical place to hang this chandelier, this hanging sculpture, as a hymn to God. Ai Weiwei is a great collector; when he came to Murano he saw that this great tradition of glassmaking was dissolving away in tired repetition of the same themes; his works are intended to encourage young people to feel a sense of emulation and recovery of the past, using an ancient technique in a contemporary idiom.” 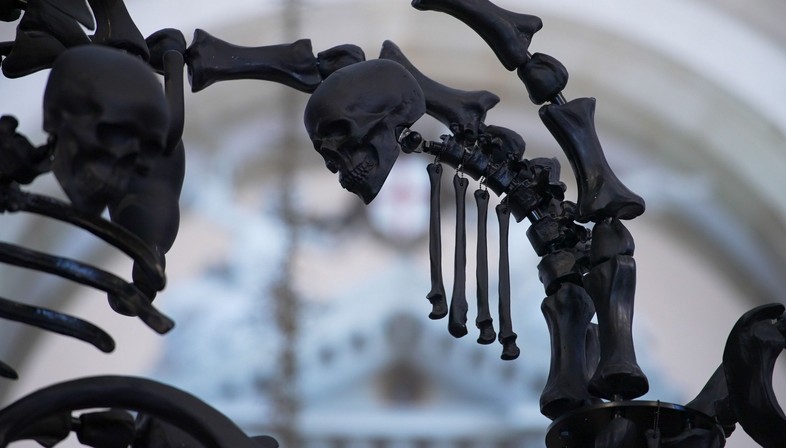 The dialogue the artwork establishes with the spaces in the Basilica is itself a part of the message, a sort of environmental and conceptual response to the questions raised by Memento Mori. According to Stefano Visintin, Abbot of San Giorgio Maggiore, whose non-profit association Benedicti Claustra Onlus has opened up the spaces of the Abbey to dialogue with contemporary art: “We wanted to re-establish this kind of dialogue at San Giorgio. Ai Weiwei’s chandelier without lights may look like a dark sort of project, but in actual fact it is intended as a moment of reflection on our fragility, emphasising the importance of the present, to make life not into a comedy, but a contribution to others, and to creation. As Ai Weiwei himself has said”, he concludes, “there are no lights in the work because it is the artwork itself that turns the inner lights back on in those who observe it”. 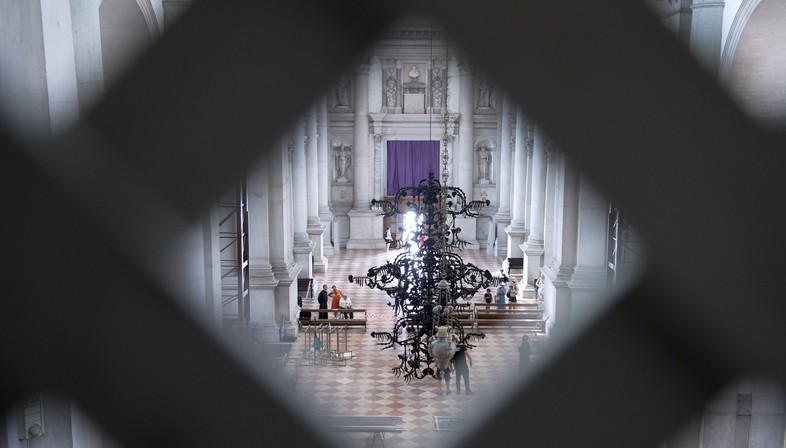 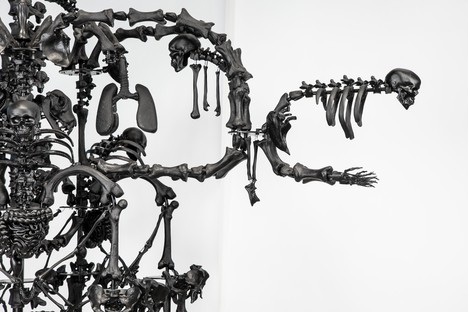 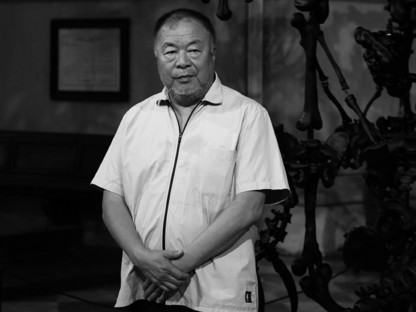 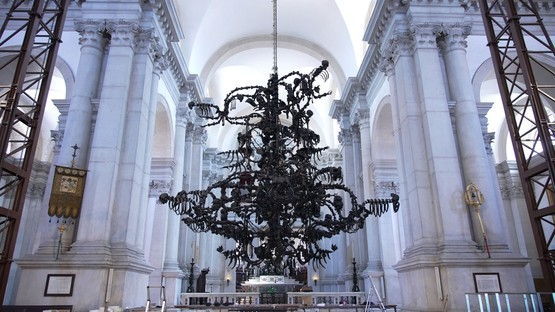 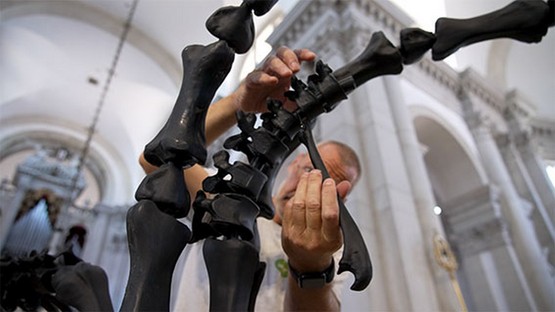 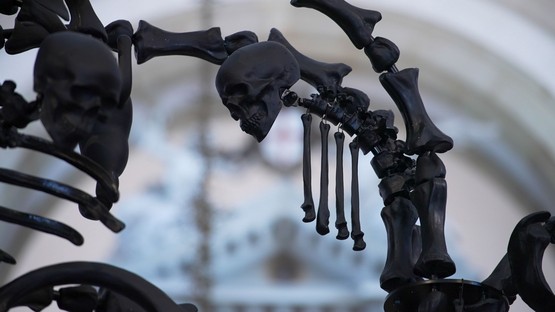 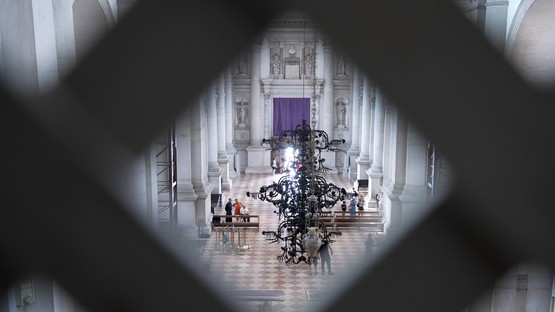 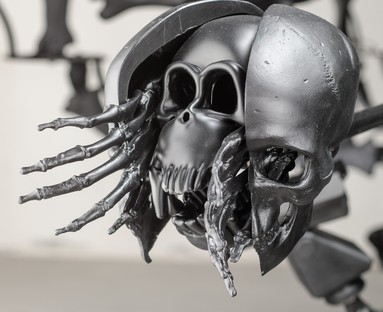 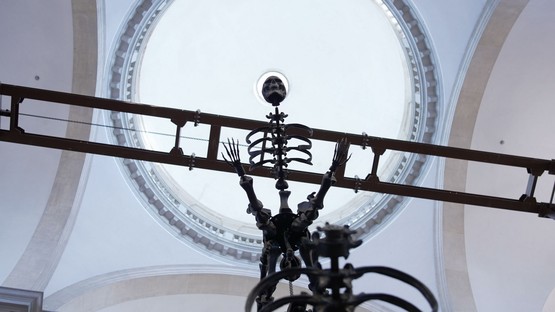 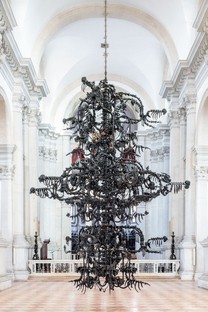 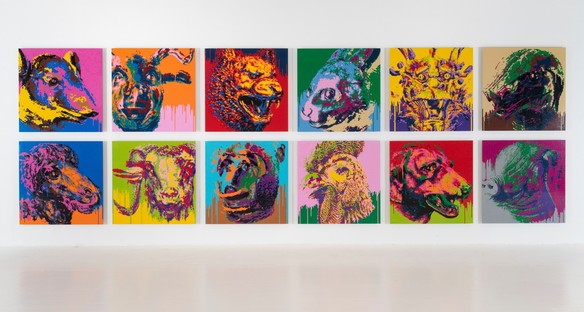 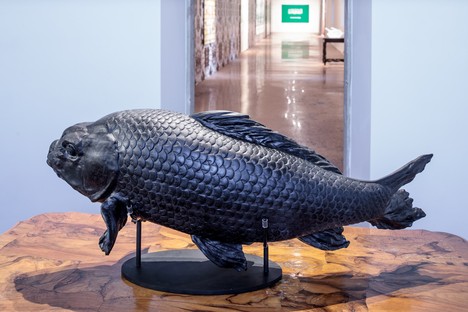 The home and museum of Mariano Fortuny, an artist and designer who never ceases to amaze