Argentinian architecture firm Alric Galindez has, after seven years of construction, completed CS House, located in a panoramic area that stands atop Cerro Tronador and Lake Gutierrez, next to the Nahuel Huapi National Park. Alric and Galindez approached the project from two points of view: that of the inhabitants, who will look out of the house towards the outside, and that of onlookers, who will see CS House from the surrounding landscape. 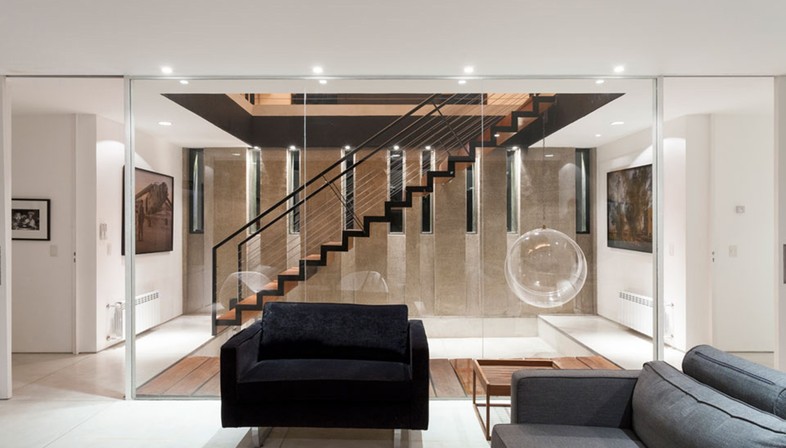 In Argentina, near the border with Chile in the area of San Carlos de Bariloche, province of Rio Negro, stands CS House. Designed by Santiago Alric and Carlos Galindez atop a barren hill with very sparse plant life, CS House is blessed with panoramic and spectacular views over the Cerro Tronador and Lake Gutierrez. The designers say that it came naturally to them, as they strolled through the acre of land that the property lies on, to try and include these two elements of the landscape in their architectural composition.

However, Alric and Galindez did not limit themselves to merely evaluating the best way to frame the panoramic view: they wanted to study both the scene and the reverse shot, i.e. both the view of the landscape and the view from outside looking towards the house. Having the benefit of a privileged location, CS House not only enjoys spectacular views, but also creates a focal point in the panorama of anyone who, coming from the road, looks towards the hill it stands on from afar. Indeed, for Alric and Galindez, every single landscape is the subjective interpretation of an area, making it necessary to understand precisely what the limits are that enclose and frame it. “That is why”, they say, “it is important for an architect’s field of work to surpass the limits of the floor plan and the construction site”.

Viewed from the outside, the house is positioned in the local area in such a way as to change its perception through the contrast between the pure architectural geometry and the organic forms of the surrounding geography. Visually, the expression of anthropism, made obvious by the clean shapes of the house, is mitigated by the use of materials that naturally fit with the landscape, which is characterised by an abundance of wood and stone. As such, these materials can be found in the two compositional volumes, positioned one on top of the other. Simple and regular parallelepipeds that emphasise the nature of the raw materials that their form is made of. One is made of cypress wood, cut into horizontal sheets, whilst the other is made of stone, shaped in such a way as to look like granite, but made with formworks like concrete. Above these is the roof with differently-angled pitches arranged in succession, almost forming a broken line redolent of the peaks of the mountains that stand majestically behind it. These angles are designed to allow the sunlight to enter the house, especially in the morning, when it gently and gradually creeps in. Indeed, it is no accident that the spaces left by the trusses are covered by large custom-cut windows that allow a great deal of natural light to stream into the house, emphasising the splendid panorama in the background.

At the request of the client, the interiors themselves, as well as their distribution, were designed as a series of places for the family to get together. More specifically, the top floor is a large open-plan space where various areas have been designated for socialising and spending time together. The furnishings, meanwhile, are minimal, leaving ample room for conviviality, especially in the area that includes the chaise longue and the fireplace.

Outside, meanwhile, there is a suspended black-enamelled steel walkway which serves as a pedestrian entrance and directly connects the garden with the upper volume, made of wood. A dirt path leads from the gate to a large car park located on the level of the stone volume. In particular, the side of the house that overlooks the slope is blind, whilst the side facing the valley is fitted entirely with vast windows. Finally, the two volumes that characterise the house create a translation, leaving room for a large terrace, which is useful for outdoor living in the summer months, whilst in the winter, it provides a cosy safe haven from which to enjoy watching a blanket of snow gently cover everything. 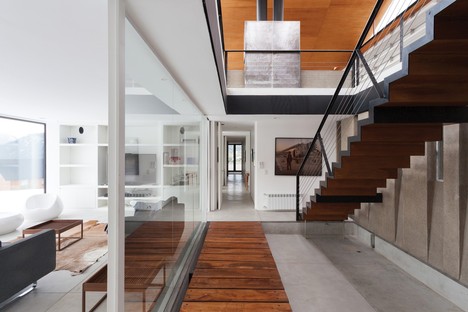 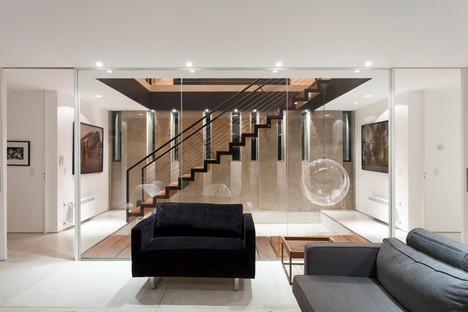 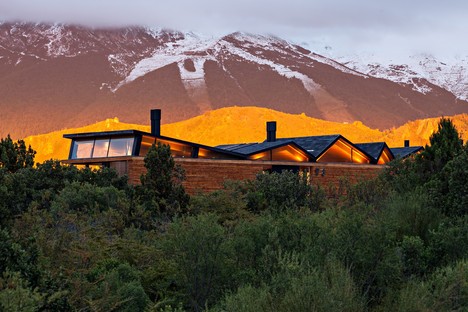 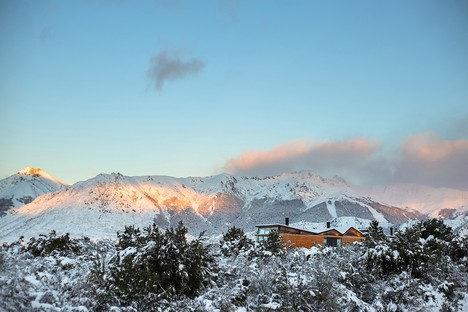 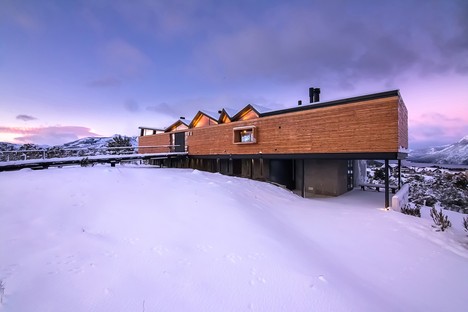 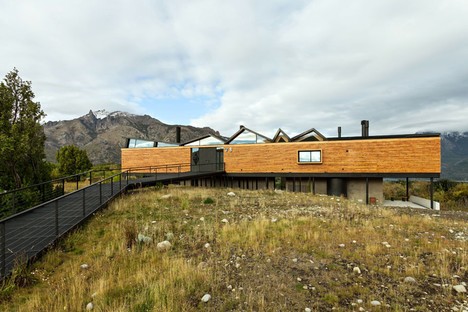 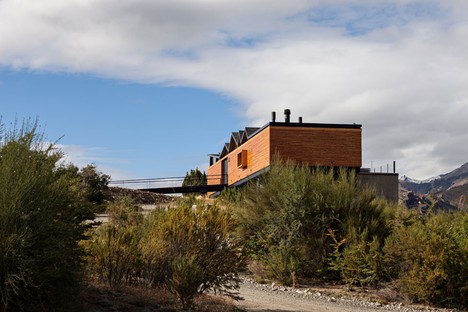 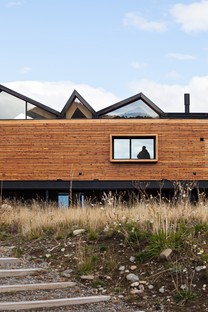 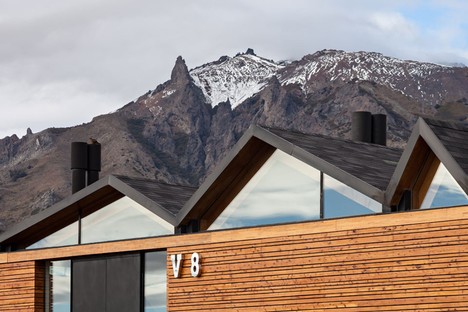 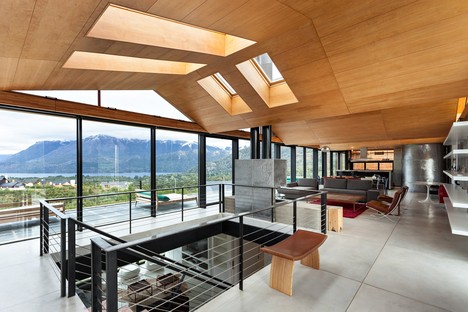 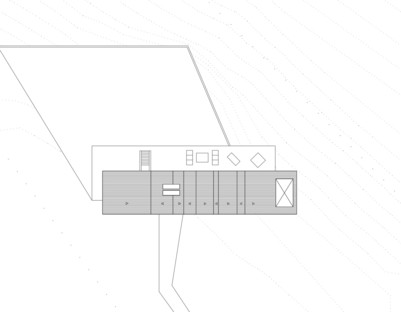 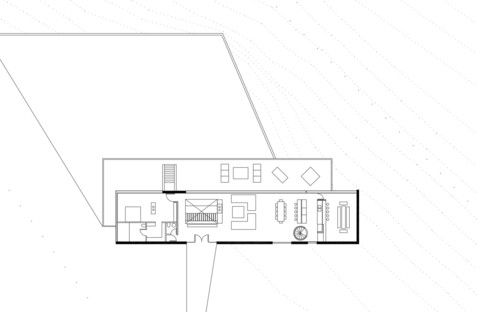 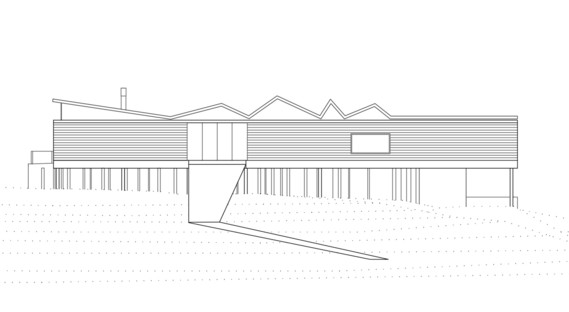